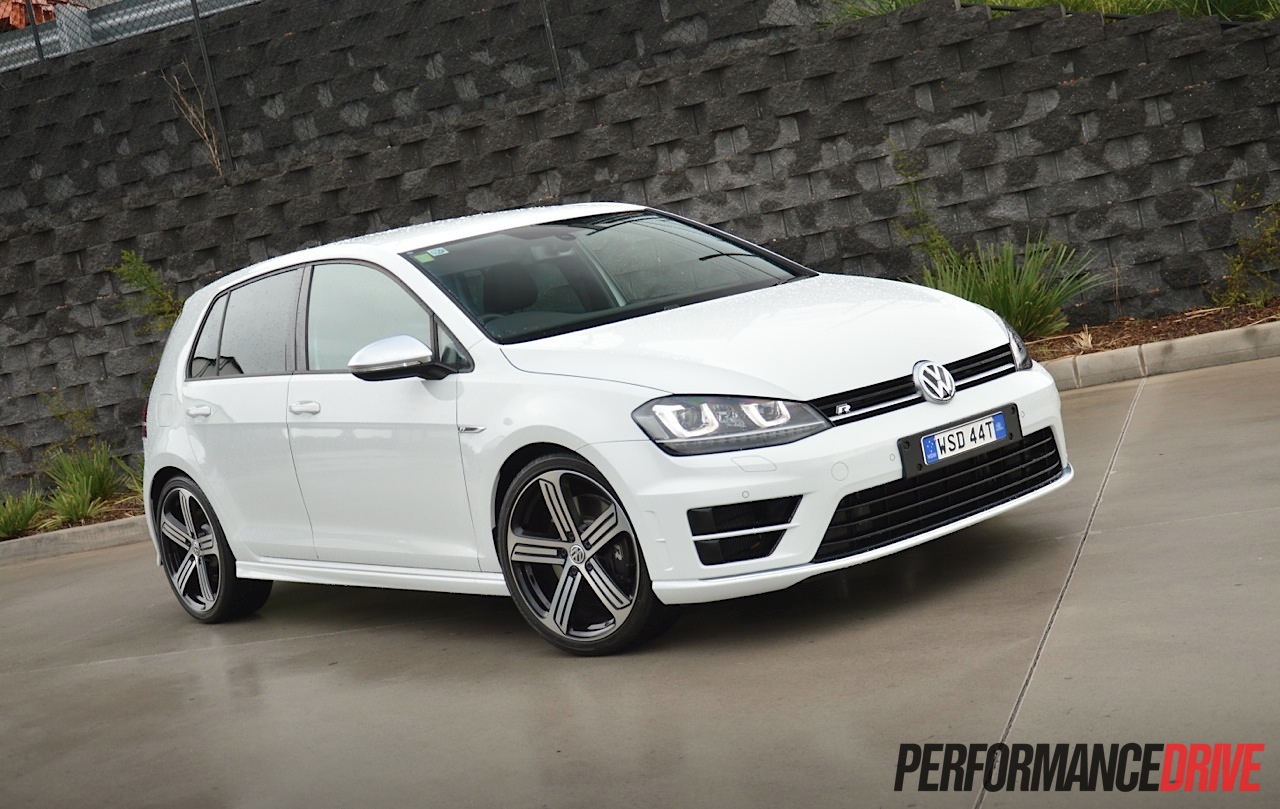 The 2014 Volkswagen Golf R Mk7 is actually quite a difficult car to review. Review, according to the Oxford dictionary, means to assess something formally with the intent to institute a change. Change? Is there anything here that needs to be changed? 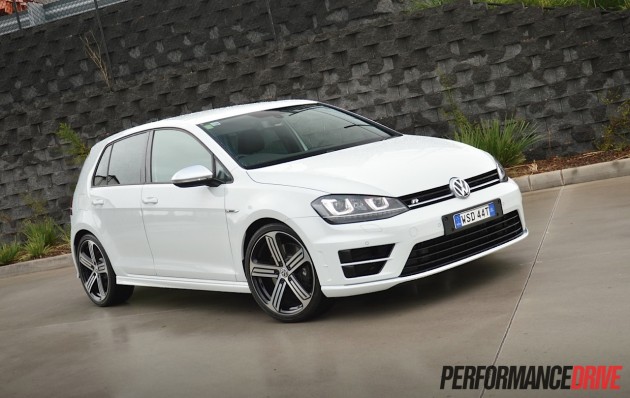 For those that don’t know, the Golf R sits at the top of the Golf hierarchy. It’s the most powerful, fastest, and quickest and most capable Golf you can buy, and being the latest edition, the Mk7 surpasses any of its predecessors in almost every conceivable way. In Australia, it’s also Volkswagen’s quickest model. Despite the friendly Golf name, underneath, it’s like a friendly assassin ready to attack its targets… in a strangely economical and fuss-free, bloodless way.

The powertrain incorporates a 2.0-litre turbocharged four-cylinder. Yep, the same ‘EA888’ that’s been in use for years, including in the current Mk7 Golf GTI and various Audi vehicles. Engineers have made a number of revisions though so it now produces 206kW of power and 380Nm of torque. It gets to this level via a modified head, valves, valve springs, pistons, and a bigger ‘K04’ turbocharger running a ballistic 1.9 bar of boost pressure (about 27.5 psi). Unfortunately, the Australian market misses out on the full 221kW output that overseas buyers get, due to Aussie conditions.

From the engine, energy is sent through a constant all-wheel drive system including through XLD locking differentials at the front and rear. Punters can opt for a six-speed manual or DSG dual-clutch auto (as tested). The price for all of this pleasureful yet practical packaging starts at $54,490 for the DSG auto and $51,990 for the six-speed manual (excluding on-roads). The auto is $10,000 more expensive than the regular GTI auto, however, we’re sure you’ll agree, the premium you pay is easily justified by the added mechanical enlightenment that you get. 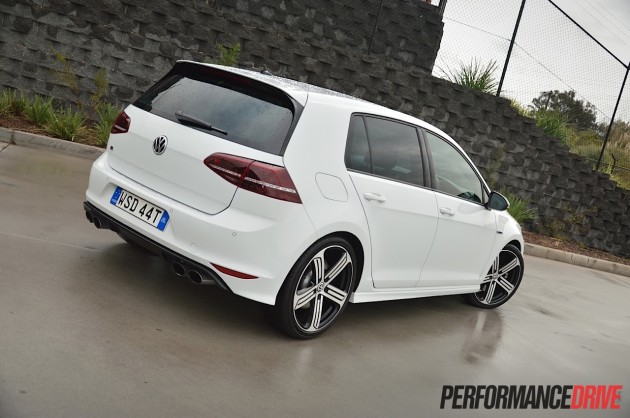 The beauty and one of the main attractions to the Golf R has always been the fact that it’s based on the Golf; a byword for practical, economical, and easy-going motoring. You get five seats inside the R, just like you do in the regular hatch. They are sports seats with huge side support chunks protruding outward in the front, but you can still get five adults inside with reasonable comfort.

Volkswagen has gone for a modest decor with a light two-tone colour scheme. Other than the soft cloth and Alcantara trim and dual tones, most of the interior is identical to the rest of the Golf range, or at least similar to the GTI. The dash layout is the same, with a central 5.8-inch touch-screen interface offering parking assistance systems and a rear-view camera as standard. Satellite navigation is also standard fitment in the R as opposed to being optional in other variants.

Throughout your entire experience with the Golf R you get the feeling VW didn’t want to distance the R too far from its petrol and diesel front-wheel drive brothers. The company could have gone for a more flamboyant trim, with bright orange or bespoke dash bits and unique gauges bulging out. But it didn’t. And you tend to like it for that reason. That’s not to say it isn’t interesting or special enough; every time you switch the ignition on cool blue mood lighting awakens the instrument needles, with ambient lighting also illuminating a soft pulse of life when you open the door.

Rivals like the Focus ST (and upcoming Focus RS), the Renault Megane R.S. and the Mercedes-Benz A 45 AMG to some extent, are all much more ‘hey, look at me’. If you’re a quiet type, the Golf R will be your best buddy. As a bonus, you get impeccable build quality inside, with soft-touch plastics and a reassuring togetherness to everything that opens and shuts.

Just like the interior, the exterior is an introvert compared to its flashier, big-winged rivals. Neat semi-dished 19-inch alloy wheels are the first giveaway, but from there, onlookers are hard-pressed to pick up on the finer details that indicate this bad boy’s real character. A bodykit gives it a fuller and closer-to-the-ground stance, and some quad-outlet exhausts bark out a reserved yet angry note. It’s an unassuming style that certainly has plenty of appeal to a range of buyer types.

Cargo space is reduced from the regular Golf due to the chassis displacement of the rear differential and drive shafts. In the normal seating arrangement there is 340 litres on offer. That’s 40 litres less than what is offered in the regular Golf GTI five-door hatch. It’s a useable space for weekly shopping and small objects, but you’ll notice the raised floor height compared with the others. You can always fold down the rear seats to open up some extra space. 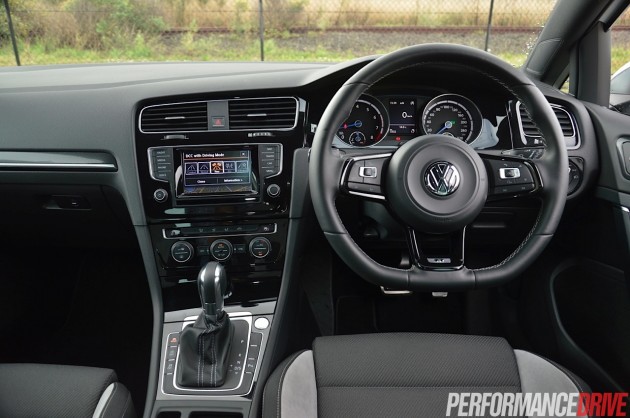 The Golf R is a serious automobile. It’s specifically made for true performance enthusiasts that need a daily driver. In daily driving conditions it behaves virtually the same as any other Golf. Yes, the sound is a bit beefier, and the driver will notice a curious urgency to throttle response, like it wants to pounce. But aside from that, the actual character is approachable enough for every driver to feel comfortable steering it around. Drivers can choose between various driving modes too for more versatility, including a custom mode which can preset all of your favourite parameters into one.

The DSG has copped a lot of criticism in the recent past. During our drive it was a pleasure to use. There are some things you need to get used to, such as the roll back and delay between shifting from reverse to drive, but if that’s what you have to pay for upshifts that happen in 0.0 seconds, we think it’s worth it. Many other higher-end sports cars behave in exactly the same way, such as the Ferrari F430 and BMW M5. This is at the current technology benchmark for performance sequential-type transmissions.

Power delivery from the potent 2.0-litre engine is super smooth and linear. Peak power is produced from 5100rpm and upwards. More importantly, peak torque is developed from just 1800rpm to 5100rpm. Convenient, isn’t it? The torque pulls you off the line with real gut-wrenching force and heaves you right up to the other good stuff which takes over at 5100rpm. We couldn’t notice any turbo-lag once accelerating through the gears, and when you do this it just keeps going and going, relentlessly. We timed 0-100km/h in a dashing 4.9 seconds, which is a tenth of a second quicker than the factory claim.

After you’ve had fun riding that wave of torque and power, you’ll probably find a corner is approaching fairly quickly. During our test we pushed the Golf through a very slippery and tight winding road. This is our usual test route where we drive all cars, but most of the time it is dry. Today, it’s saturated. Perfect. Perfect is the only conclusion to be drawn in regards to grip and traction levels. You can come hot into a corner, jump hard on the strong 340mm brakes, blip down a couple of gears, and squeeze the hell out of the throttle and it just rips you around with dedicated competence. The 4MOTION all-wheel drive system is sensational.

Volkswagen explains that when operating under a relatively low load or when coasting, forward propulsion comes primarily from the front axle, and the rear axle is decoupled. It is set up like this to help save fuel when all-paw grip is not needed. The rear axle of the Golf R can be variably engaged in fractions of a second whenever necessary. This is done via a Haldex coupling, which is activated by an electro-hydraulic oil pump (you can see it working in the video below during the first take off shot). This advanced system works wonderfully with the DSG auto.

Some enthusiasts say they can change gear quicker with a manual, but seriously, these people have rocks in their head. Up, up, up… down, down, floor it, up… up… up… If you can change gear quicker than the DSG with a manual, and get it right every single time, and produce a goosebump-inducing barp sound in between upchanges, we’ll give you a medal. We haven’t actually prepared a medal but it doesn’t matter, we’re confident nobody can match the performance and consistency of the DSG with a manual. It’s not humanly possible. 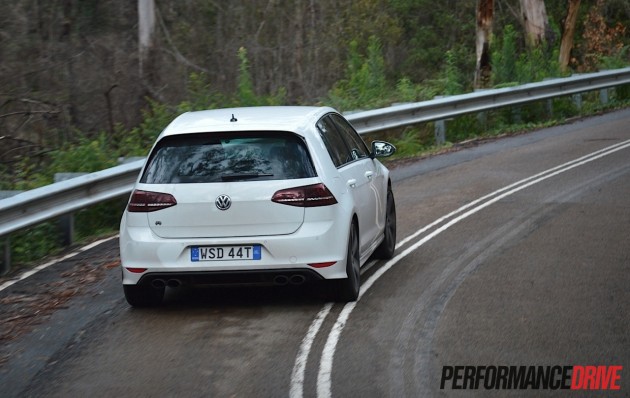 So, as mentioned at the beginning, it’s hard to review this product in the true meaning of the word. There are no areas that we can find that require further development or attention. It’s mind-blowingly fast in all conditions, and not just for a hot hatch but for a serious sports car. You can live with it everyday and you don’t need legs like tree trunks or arms like branches to operate the controls.

It’s well-quipped. The price is good. And above all of this, the DSG is reasonably economical – we averaged 7.7L/100km (official is 7.1L/7.3L for the manual). It’s cars like these that remind us why we love driving. If it were our choice we’d buy a black version with the DSG. Hmm, maybe it’s time to trade in.

CONS:
– Umm…
– 206kW pushed out of a 4cyl engine makes you wonder about longevity/reliability? 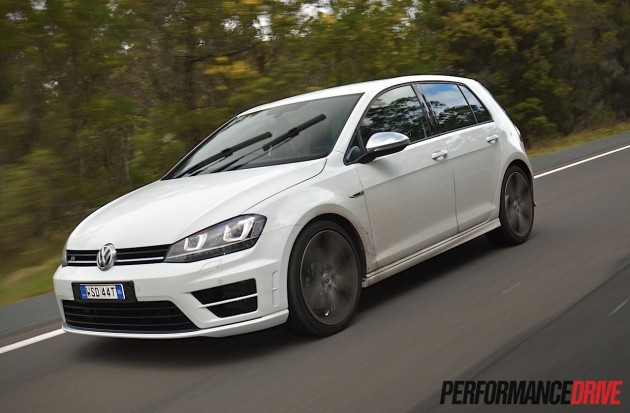