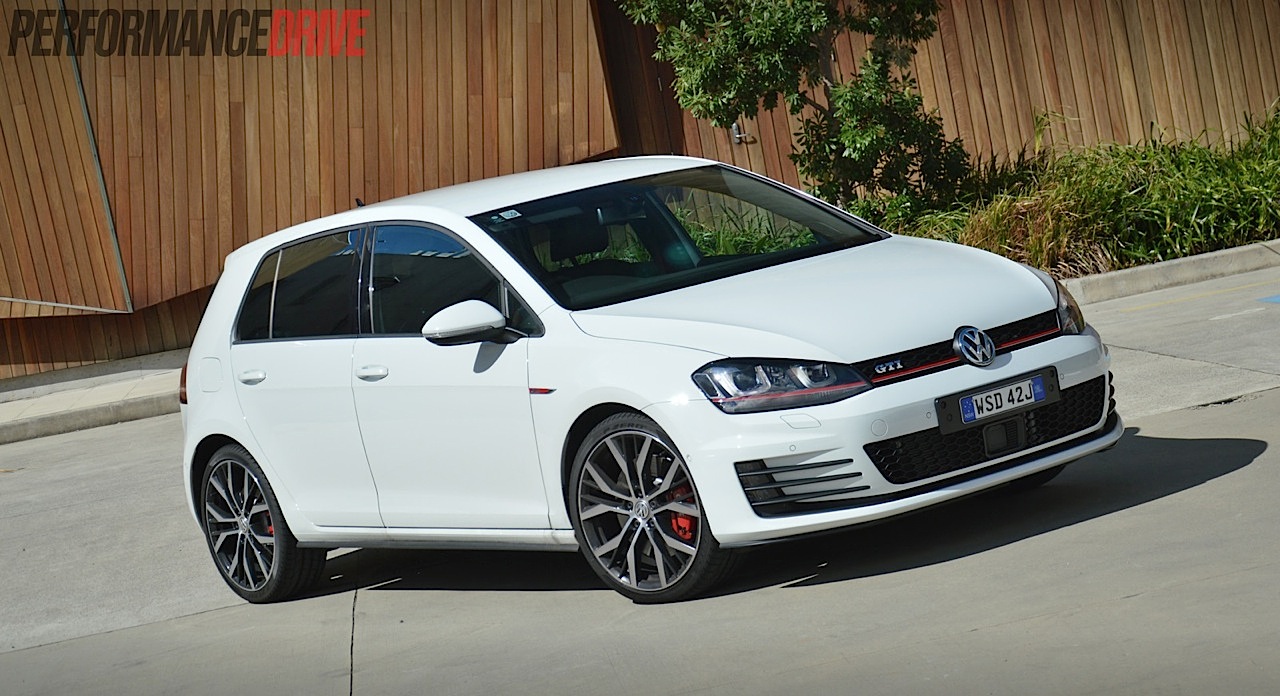 To the untrained eye this humble little hatch is just another compact convenience made for the masses. You wouldn’t expect it to smoke both front tyres off the line, belch out a rally car soundtrack, or change directions like a wasp, would you? But in fact this is no ordinary hatch. It’s the Volkswagen Golf GTI Performance. 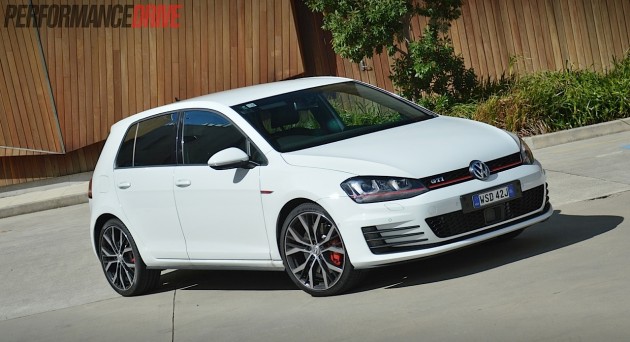 It’s almost the same as the Golf GTI hot hatch, which, as we found out earlier in the year, is the benchmark in terms of blending practicality, handling, and sheer speed into one simple package. There are a few little clues that give away the performance side of this though, such as the GTI-labelled brake calipers and 340mm front discs (up 28mm), tinted LED taillights, and exclusive 19-inch ‘Santiago’ wheels.

Power comes from a tweaked version of the company’s widely used EA888 2.0-litre turbo four-cylinder, lifting output from 164kW to 169kW. The engine comes exclusively with the otherwise optional six-speed dual-clutch DSG auto, feeding twist into a locking differential at the front. The price for all of this starts at $48,490 (excluding on-road costs) – up $4500 over the regular GTI auto. 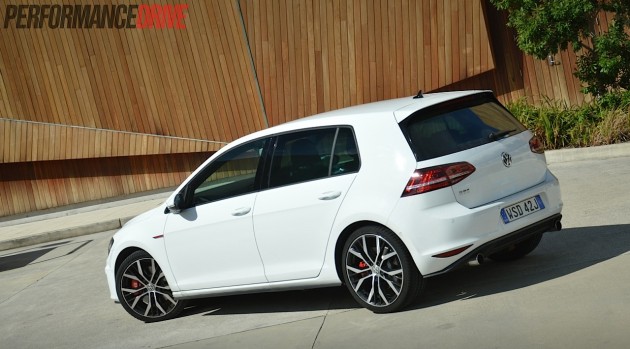 Like the exterior, the interior is subtle yet performance oriented. There’s some big chunky sports seats in the front, which are superb at holding you in and keeping you comfortable, while the flat-bottom sports steering wheel says, ‘Yes, I can be a normal hatch. But remember, I have a bit of Lamborghini in my blood and I can be very serious about driving if you want me to be’.

Stopping short of the range-topping Golf R, the GTI Performance comes packed with almost all luxuries and technologies available to the Mk7 Golf. You get strappings of leather, dual-zone climate control, a clever touch-screen sat-nav interface which can sense your touch coming and pop up menus before you’ve hit them, and a range of driving modes with adaptive suspension, all as standard. You can opt for radar-guided cruise control (as tested) as well, which comes with the Driver Assistance package ($1300).

The leather seats feature a strip of fabric on the sides. We’re not sure if these are purposely put there to reduce cabin noise but they do well to keep squeaks and rubbing noises to a minimum. The cabin is very quiet and all of the dash fixtures feel robust and well put together with the Germanic attention to detail we’ve come to expect from Volkswagen.

If you’re in the market for a small hatch, chances are, you’ve looked at or at least thought about the Golf. And rightly so. It’s a very popular model, setting standards all around the world. One of the best things about the Golf in our opinion is the user-friendly cabin and features. It’s advanced and there are a lot of techno gizmos, but the way VW has arranged all of these makes it easy to swallow.

Take the dash for example, the design comprises of mainly two axises; vertical and horizontal. Most new hatches that are out at the moment try to be fancy by incorporating slashes and futuristic curves. For the Golf, it’s modern yet purposeful, and it’ll probably age more gracefully than its rivals. There’s an extensive use of quality materials too, with cheap tacky plastics kept to a minimum.

Seat space is about average for this segment. Front passengers will appreciate the low, hunkered-down position and slightly skewed dash, while the rear passengers will enjoy that simplistic and uncluttered theme, with good access room and wide seats. If there was ever a ‘safe’ option to go for in this segment, the Golf GTI Performance is easily the most suitable for the widest variety of buyers. On the flip side of that token though, the cabin is quite boring and mono-toned, with only hints of its true sportiness showing in some red stitching. 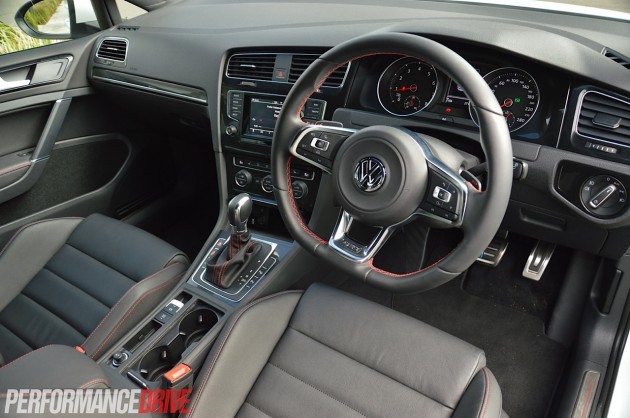 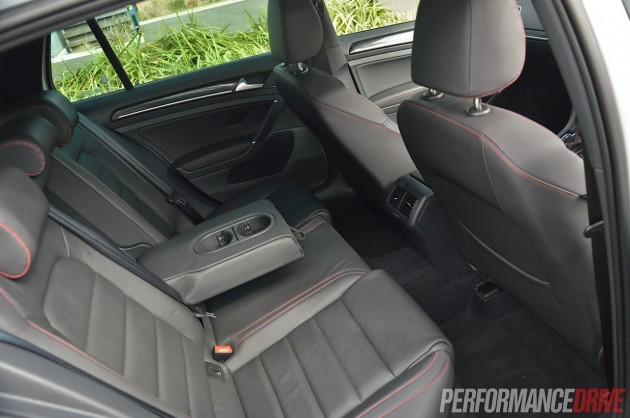 Okay, so it comes with a bit more power, a locking differential and some more bitey brakes. What does this all mean out on the road? And is it that much better or more enjoyable than the regular Golf GTI?

The answer is no. Not really. The problem is most of the time you’re going to be driving in traffic, swearing at other motorists (behind the protection of the glass cabin, of course), and running errands or going to work. So in essence you don’t really get to experience or appreciate the additional spice of the performance condiments.

There’s another issue we have with this car. It’s just so damn perfect. The engine delivers 169kW, which is ideal for this type of vehicle. It’s that linear and progressive though that you actually wish it had some turbo-lag, purely to feel the acceleration. Peak torque (350Nm) is available from 1500rpm all the way up to 4600rpm. Peak power is then available from 4700rpm to 6200rpm. There’s literally 100rpm of ‘grey’ area. 100rpm. It’s ridiculously engineered and precise. No other hatch on the market is able to showcase this level of fanatical engineering.

From the moment you touch the throttle you’re getting maximum torque – the stuff that pushes the car and gives you that gut-lifting push in the back. If you keep your foot into it until 4600rpm, the peak power then takes over pretty much until redline. The word ‘linear’ is boring and perhaps overused by car journalists to describe the sensation of building up speed in some cars. But with this, we can’t think of a more appropriate word – Funk & Wagnalls’s next edition should just show a picture of this car in the ‘linear’ listing.

It’s a similar story with the handling. There aren’t many vehicles that are as confident or as capable as the Golf GTI Performance. Sure, the Renault Megane R.S. can pull higher g-forces on baby-arse smooth roads and racetracks, and you can enjoyably get the back end out in the Ford Focus ST, but the Golf rushes through with an almost unbelievable level of composure and dedication. Understeer is only an issue if you turn in with stupid speed, from which point the best thing you can do is apply lots of throttle.

The locking differential means there is no chance of embarrassing inside wheel wheelspin, like what you get in most of the cheaper rivals. The Golf grips up and shots you out, with no wrestling of the steering wheel needed and no commotion in general. It simply gets on with the job of turning.

If you’re after an everyday performance car the Golf GTI Performance is an utterly brilliant drive. If you’re after an economical hatch – we averaged 7.9L/100km – with a bit of flare and pizazz, the Golf GTI Performance is excellent for that too. The only area where it falls short in terms of driving is self-enthusiasm and excitement; it doesn’t tend to make a big deal about the things it is capable of doing. It’s like it’s too perfect and clinical. (Can it be marked down for that?) 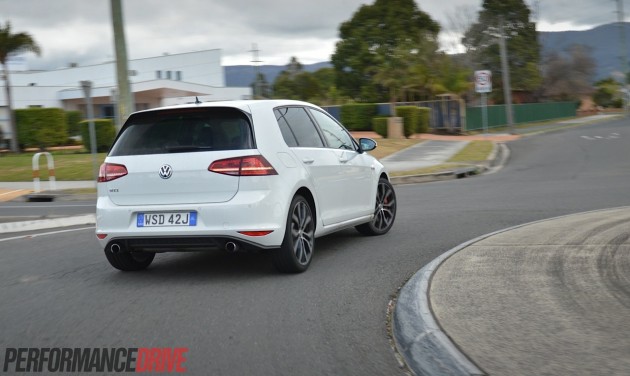 If this car sat down for a job interview it would get the job and probably go on to become a director. It’s not only looking prim and proper with neat attire, its extensive list of skills and professional background is impossible to ignore. There are so many good things about the Golf GTI Performance that we’re struggling to find any reason why you should not buy one. If it doesn’t set benchmarks in certain areas, it at least performs on par with the rest or makes up for it in another area.

The only questionable aspect is the price tag. When you’re spending $48k on a hot hatch you want to know you’re getting the very best there is. It’s at this point the all-wheel drive Golf R comes into focus, which is only $3500 away (for the manual). What else is there? The Ford Focus ST is a cracking car and is priced under $40k, meanwhile the standard Golf GTI is about $4000 cheaper and it is, for most of the time, just as good.

CONS:
– Priced too close to the Golf R?
– So perfect it becomes boring? 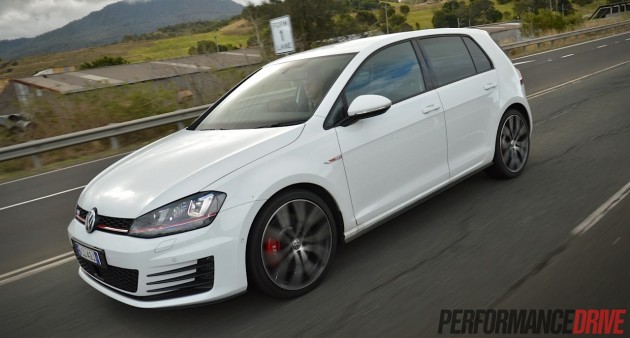