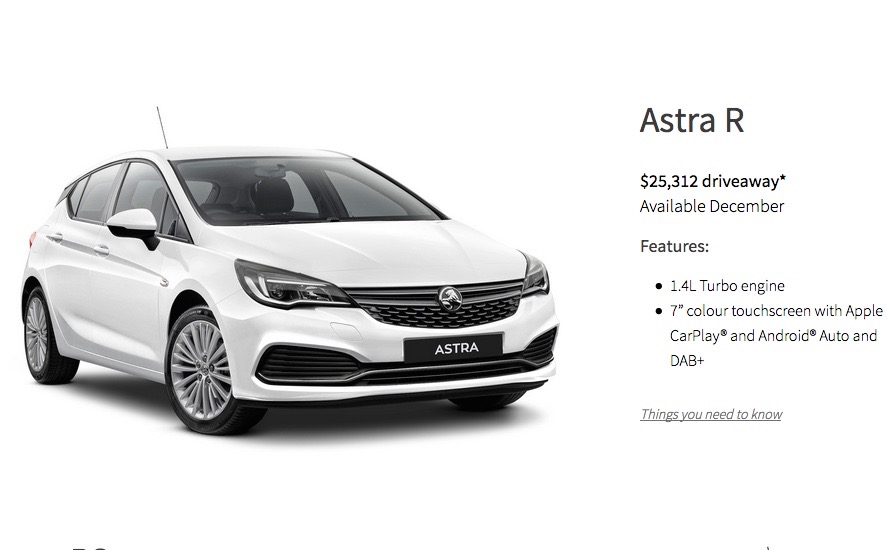 The all-new 2017 Holden Astra will launch in Australia later this year based on the new Opel Astra, and the Holden website has just revealed some interesting details including initial drive-away pricing.

It confirms the new small hatch, which will go up against the likes of the Mazda3 and Toyota Corolla, will come in three main variants lines; Astra R, Astra RS, and Astra RS-V.

For the R power comes from a 1.4-litre turbocharged petrol engine. Outputs haven’t been confirmed but European models develop 110kW and 230Nm. Euro-spec models also consume as low as 4.9L/100km on the combined cycle.

It’s unknown at this stage if Australia will get the new 1.6 CDTi offered in Europe. That unit produces 103kW and 340Nm thanks to a twin-turbo setup.

Judging by the Holden website the base R will come with a 7.0-inch MyLink touch-screen interface as standard, equipped with Apple CarPlay and Android Auto technology. A rear-view camera, 17-inch alloys, and LED running lights will also be part of the mix.

In the RS, it looks like it will add forward collision warning with head-up warning with automatic emergency braking, along with parking assist and blind-spot assist. RS-V adds 18-inch alloys and an 8.0-inch touch-screen, with a leather trim.

This should be a very good car for the segment. In overseas spec at least, it has won many awards including the 2016 European Car of the Year. Engineers have managed to cut up to 200kg from the car’s mass too, which should help with driving dynamics.

Holden says the new model will arrive in dealerships in December. More details are expected to be announced very soon.