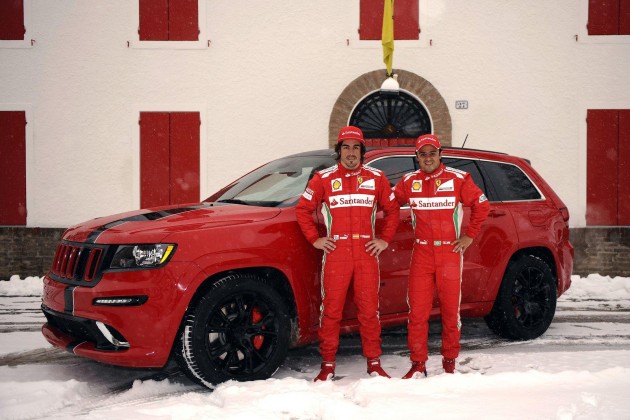 The special editions are dressed in unique Rosso Corsa ‘Ferrari red’ paint, and feature go-fast black stripes that run down the middle. The powerful SUVs also come with carbon fibre side mirrors and various black highlights, matching the black stripes.

Under the bonnet, the 2012 Jeep Grand Cherokee SRT8 doesn’t really need touching. It features a 6.4-litre naturally aspirated HEMI V8 producing a gut-wrenching 347kW of power, and 630Nm of torque. Top speed is rated at 257km/h, while 0-100km/h can be smashed in 5.0 seconds.

In case Alonso and Massa really wanted to stand out, as if the Jeeps aren’t already quite obvious special editions, SRT has fit black 20-inch alloy wheels, lowered the ride height by around 40mm, a had the Italian flag painted on the underside of the rear spoiler. The interior is also reupholstered in Italian-style red leather.

You might be wondering, why on Earth is Jeep giving away these SUV muscle cars to Ferrari drivers? Well, the Grand Cherokee SRT8 is set to launch in Europe in May, and these are the first two to enter the region.

We must also remember Chrysler has been bought by Fiat, and Fiat owns Ferrari. So we see this as a little brand bonding exercise, with a dash of publicity for good measure.

The vehicles were handed over at Ferrari’s test track located in Fiorano, northern Italy.