RAUH-Welt Begriff (RWB) Porsche 911 tuning specialist has made a US debut at the 2011 SEMA Show in Las Vegas. The company previewed a number of custom show cars at the event, showcasing the company’s trademark wide-body kits. 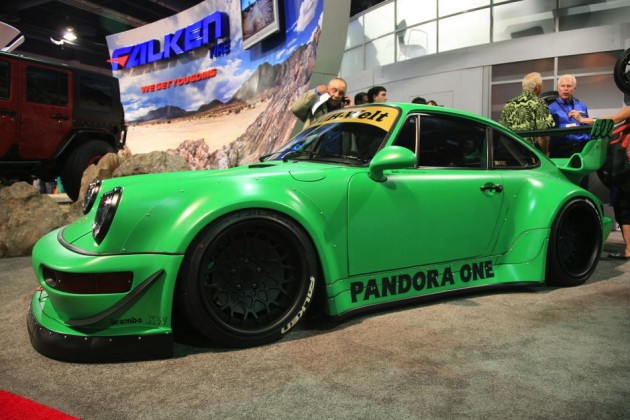 Those who love their old-school Porsches will have heard of RAUH-Welt Begriff. It’s a Japanese company that specialises in recreating some of the most awesome 930, 964 and 993 911 rebuild and bodykit packages ever seen. RAUH-Welt Begriff makes each customer’s ride a custom creation, forming the panels from scatch.

The RAUH-Welt Begriff mouthwatering wide-body bodykits give 911s a very low and very fat stance, with a huge rear wing at the back and ultra low side skirts all round. Most packages are also normally matched up to epic deep-dish and very wide tyre and wheel packages, giving off a distinctly mean look and a very serious racer attitude.

The bespoke kits feature elements from various Porsche racing eras, such as the side air intakes on the rear wing from competition 993 911 RSRs, to the more modern winglets or side plates on the front corners of the bumper bar, providing added downforce and directing air flow.

The 2011 SEMA Show was the first proper debut for RAUH-Welt Begriff in the USA, many predict the brand and the kits will become extremely popular after attracting plenty of positive attention at the show.

Click play on the videos below for an overview on the company, what it means to owner Nakai-San and how the company came about.