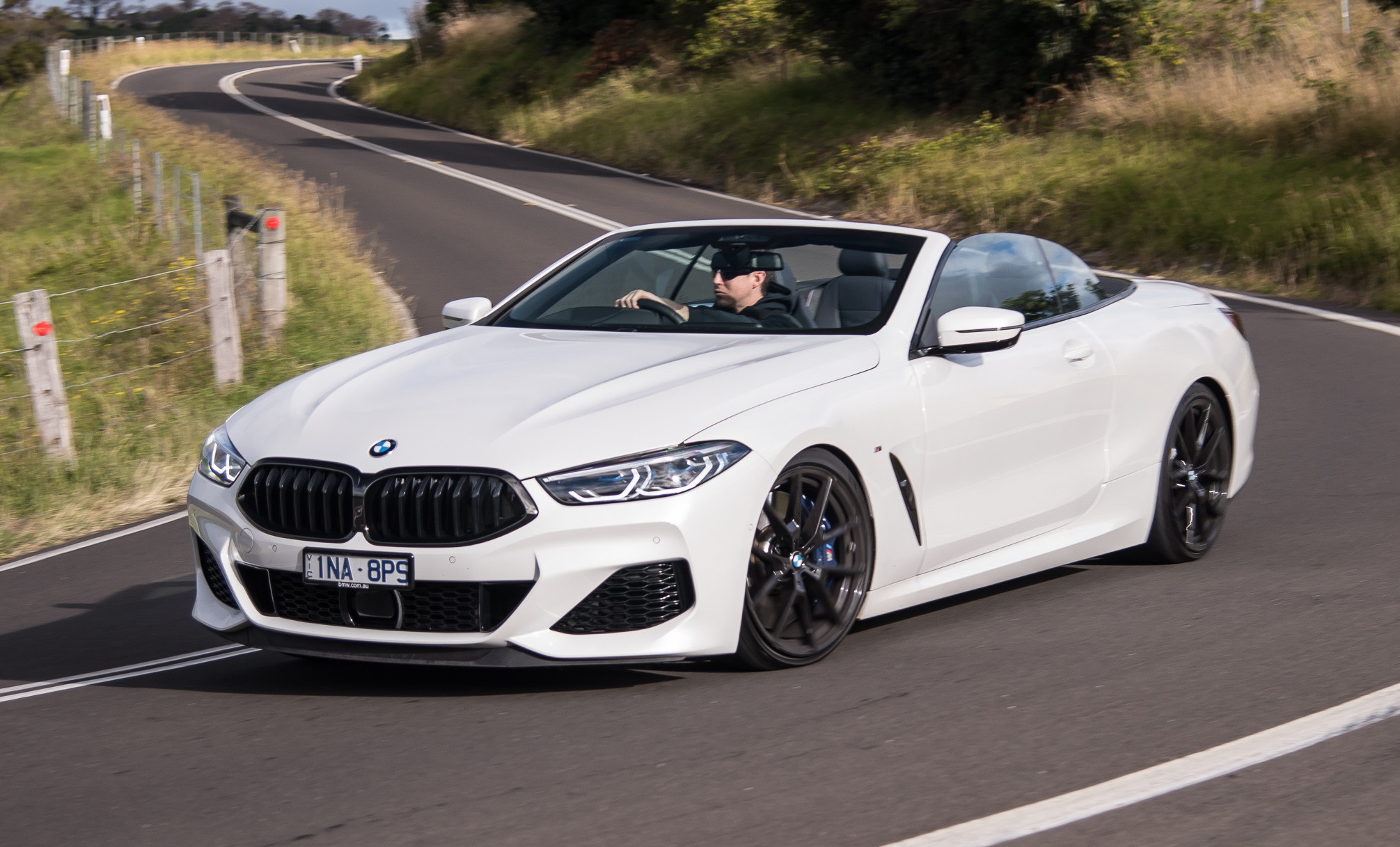 Behold, the all-new BMW 8 Series is here. After plenty of rumours and lots of engineering and design work, BMW has revived the iconic 8 Series nameplate. Does it carry on the playboy, yacht-party lifestyle of the predecessor? Or is it more of a driver’s machine this time around? Let’s take a look. 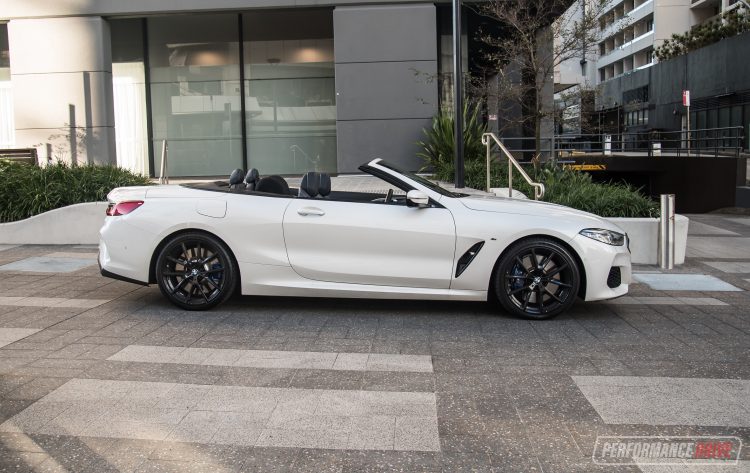 In Australia only one main variant is available; the M850i, albeit in coupe and convertible form. That is until the top shelf M8 comes along. Overseas, the new 8 Series comes in 840d flavour as well. Australians are known for loving performance variants, so we guess this is why we only get this one.

We ain’t complaining – the M850i comes with a twin-turbo V8 that produces 390kW and a whopping 750Nm. This is sent exclusively through an xDrive all-wheel drive system. Prices start at $272,900 for the coupe, and from $281,900 for the convertible (excludes on-road costs). 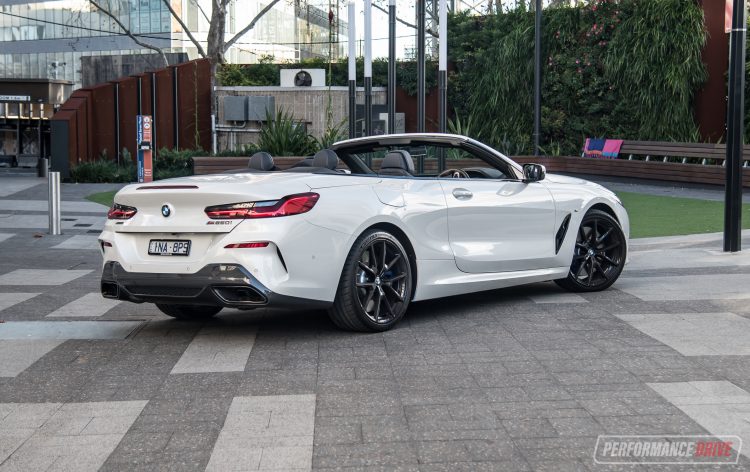 So, what is the 8 Series exactly? Well, it is a modern remake of one of BMW’s most famous models. Those old enough to remember Hey Hey It’s Saturday will remember the pointed front end and pop-up headlights of the original. It was an inspiring grand touring luxury car, available with a V12 engine.

This new version looks set to follow a similar path, but in a more modern way. For example, the front end incorporates grille shutters that close at speed to improve aerodynamic efficiency. There’s also a subtle twin-turbo V8 under the bonnet. And even though it’s not a V12 like the original 850i, it is a lot more powerful and more fuel efficient, and perhaps better fitting to today’s market.

Being a product of M Performance (not to be confused with the proper M division), the M850i features various performance credentials. Some of these include adaptive M suspension, M Sport brakes with four-piston front and single-piston rear calipers, along with an M Sport locking differential for the rear axle. 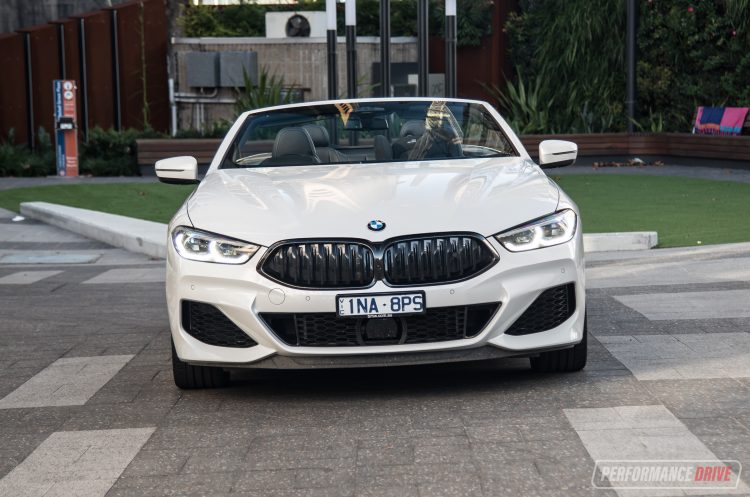 You’ve probably also noticed the smattering of M Performance exterior garnishes, like the black grilles at the front, grey side mirrors and matching rear apron, and gaping exhaust outlets. Oh, and the 20-inch black alloy wheels measuring 8.0 inches wide on the front and 9.0 inches on the back. These are wrapped in the superb Michelin Pilot Sport 4 S tyres, of 245/35 size on the front and 275/30 on the back.

Step inside and you’ll notice it definitely feels like a big grand touring coupe. You can stretch the legroom right out, almost like the entire bonnet is housing your legs, and the seat can be lowered down ridiculously low. In fact, we usually like a low seat setting but in this, it goes so low we had to lift it up a bit. This is good news though as it means headroom isn’t going to be a problem for most users. 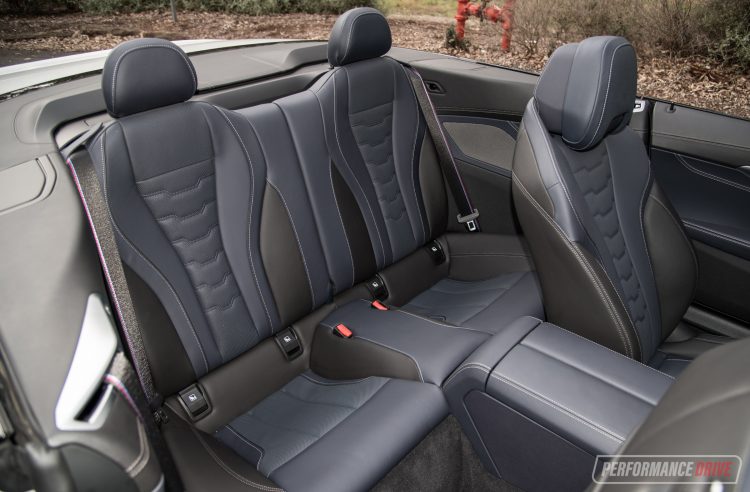 Rear seating is tight, but manageable. The seat backrest is rather upright but the headroom and legroom aren’t as bad as what you might expect for a car of this style. So long as the corresponding front passenger doesn’t have the seat slid all the way back, an adult of small to medium size could endure a journey of around an hour or so without getting all pins and needley.

We were expecting a bit more opulence and exuberance in the cabin. After all, it is a near-$300,000 car. Most of the dash design is carried through from other BMWs currently in the showroom, with the familiar 10.25-inch touch-screen for the dash, and a 12.3-inch digital screen for the instrument cluster. We guess this is the BMW way; remaining subtle and sticking to the family theme. 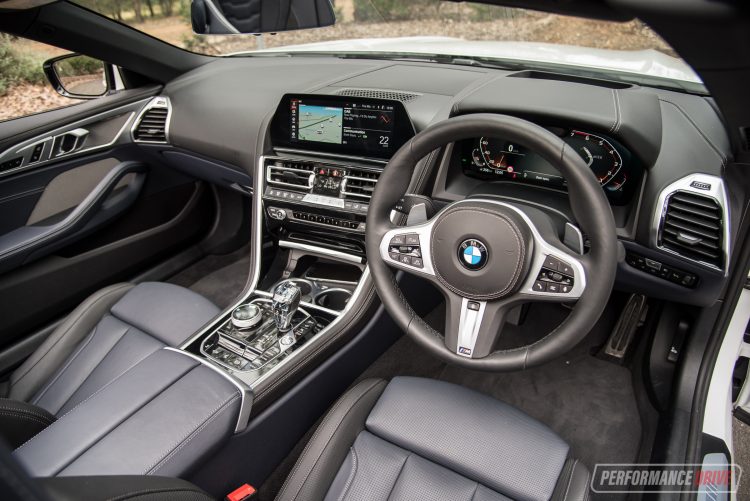 The build quality is impeccable and there’s a very high standard for premium materials used throughout the cabin. Buyers can option a number of different colour combinations too, so the atmosphere can be brightened up if you so desire. Just sitting inside though, it doesn’t seem all that different in design and layout from an X5, for example. And we think it deserves more than that. All of the controls are presented with practical positioning, and the buttons and controls are designed in BMW’s usual way. Except for two specific areas; the glass-trimmed gear shifter and iDrive controller.

We get where BMW is going with these but we’re not entirely convinced they are the right choice. Mainly because the rest of the cabin decor is fairly modest, as mentioned. Sure, if there were other bits of jewellery encrusted throughout the cabin, with more flamboyant colour schemes, it would probably make more sense. But in this test car’s specification, with a mostly dark blue and black upholstery, these items can seem a little out of place. It’s also worth noting the original 8 Series didn’t feature detailing like this. 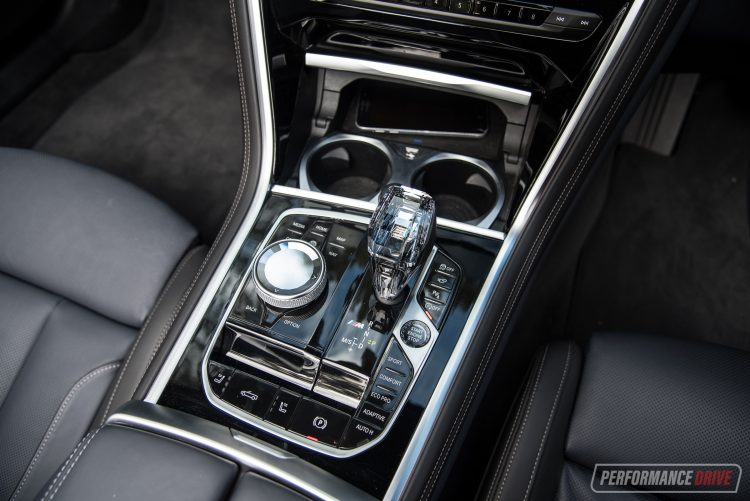 Out on the road the M850i glides effortlessly around corners and sweeping bends. You need only apply small steering lock to achieve manoeuvrability in tighter, slower-speed situations. Meanwhile, at higher speeds, the car feels like it hovers during lane changes and in sweeping bends.

If you simply cruise around, which is what we suspect most owners will do in their M850i, it is a very smooth and comfortable car. In this sense, it definitely fulfils the luxury attraction that the 8 Series is renowned for. Owners will find it relaxing to just weave the car down a twisty street, or even around roundabouts. It has a distinct calmness and fluidity to its movements. 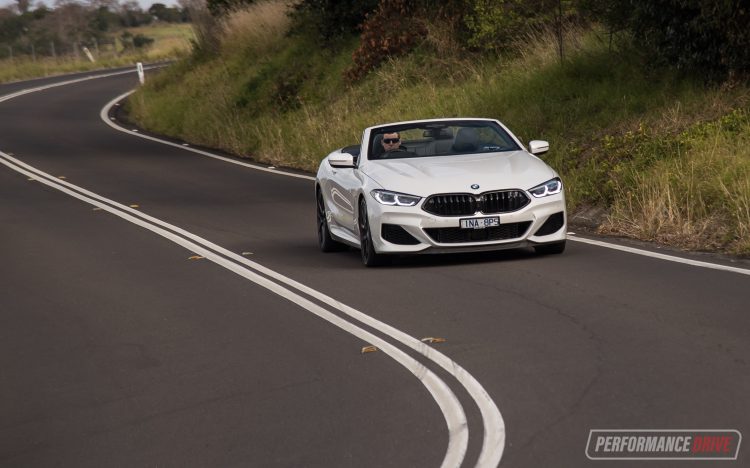 There is only minor body roll, but the suspension does contain a reasonable range of compression to absorb bumps. Given that this is the M Performance model, the ride quality is very good in our opinion. Turn up the tempo though and it transforms into a different animal.

You can select between Comfort and Sport driving modes, with different steering weights and powertrain responses provided by each. The biggest change we notice with these is the adaptive suspension. In Sport Plus mode the 8 Series becomes tensioned and reactive. It’s much tighter and more athletic than what you might expect from a vehicle of this type.

It’s not like it is a lightweight car, either. At 1971kg (tare), it’s about 300kg heavier than it feels. You can really throw the weight around like it’s a much smaller car, and there are no moments of nervousness or unsettling behaviour. In fact, the confidence and stability is astonishing. 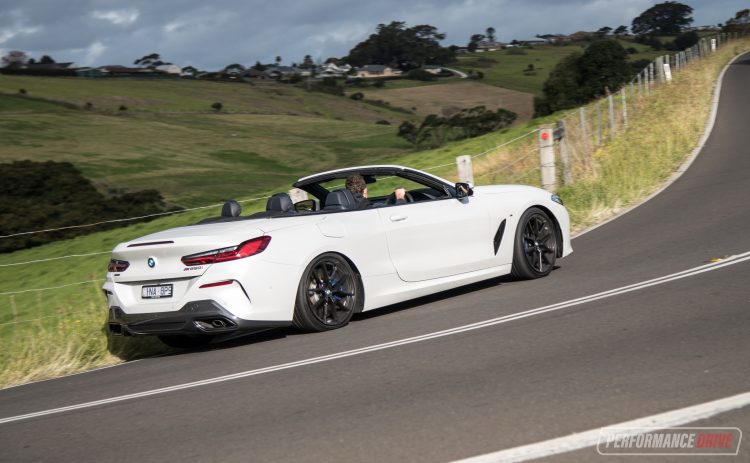 You can tell the xDrive all-wheel drive system has been set up by an actual driving enthusiast. There’s none of that characteristic understeer tendency that you often experience with AWD vehicles. Instead, this beast will tuck into a corner and remain on your desired driving line. Even if you feed in large quantities of throttle. It really is amazing. The system will sort everything out.

You’ve probably heard that term or something along those lines before; ‘it will sort everything out for you’ – we’ve probably said it. Except here it’s different. It’s hard to explain but it pretty much feels like a rear-wheel drive car throughout the entire cornering process, however, it simply doesn’t give way to wheelspin. And we mean it really doesn’t. There’s a slight moment of what feels like the initiation of oversteer when you really push it. Only, you’re left with a mere hint of hip wiggle. No counter steering is needed at all.

Normally you might say this style of driving is boring. But when you have 750Nm on tap, traction would otherwise be a problem to solve rather than a bonus to celebrate. Speaking of that 750Nm, let’s talk about the engine. The bonnet hides a 4.4-litre twin-turbo V8, which is an evolution of the N63 family that we first saw in ’50i’ models from around 2009. 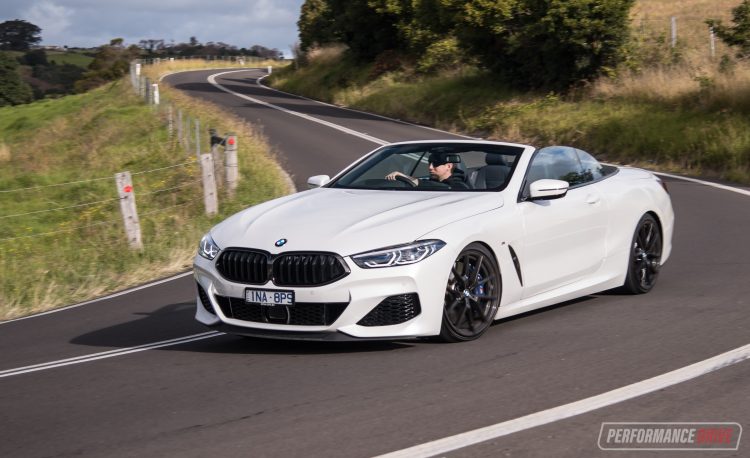 In this latest tune it comes with VALVETRONIC variable valve timing as well as double VANOS variable camshaft timing, and runs a high compression ratio (for a forced induction engine) of 10.5:1. There are two twin-scroll turbochargers nestled within the V of the engine – ‘hot-vee’ style – with twin air-to-water intercoolers. As a result, you get 390kW at 6000rpm, and 750Nm between 1800-4600rpm.

These figures are strong and look pretty good on paper. But on the road it’s the immense torque that gets you giggling every time. Particularly as it’s available for such a wide rev range. You can nail the throttle in fourth gear at 40-50km/h and it will gurgle and gargle deeply, while building immediate, heaving momentum. Considering this is supposed to be a grand touring luxury car, the level of performance here well exceeds our (and probably your) expectations.

Using our Racelogic Vbox Sport and our private road, we clocked 0-100km/h in just 3.93 seconds. This is pretty much on par with BMW’s claim of 3.9. Pushing on, we clocked 0-200km/h in just 12.88 seconds. Again, these figures are not usually associated with big cruising convertibles like this. Also impressive, the quarter mile came up in 11.98 seconds. It’s a beast. We can’t even imagine what the M8 will be like. 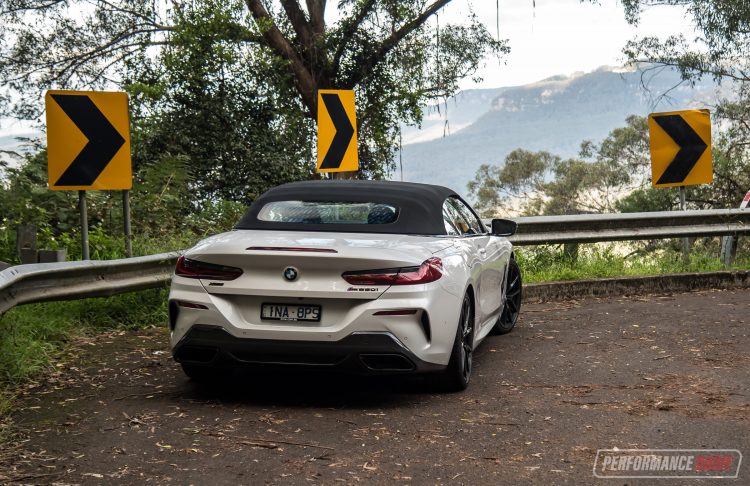 This was a car that really surprised us. Yes, there are heaps of cars that pop up throughout the year that are surprising. Personally, I’ve always been pretty good at predicting what a car will be like to drive, simply after reading the specs. But this, I got very wrong.

I thought this was going to be a big, luxury land yacht designed for cruising. A nice one at that, with BMW’s typically well-sorted steering and all. But still a cruiser. It’s actually a really fast and really focused machine if you give it a chance to perform.

The engine is a frenzy of brute torque and fast-revving power, and this is sent through one of the best AWD setups I’ve encountered in a sports car. Along with the magnificent all-wheel steering, you’re left with a very serious driver’s car. Again though, when you want it to be. Peel the roof back and chug around town if you want to. Because it also fulfils those duties, splendidly.