Swedish automotive magazine Teknikens Varld recently carried out the infamous ‘moose test’ with Porsche’s latest SUV, the Macan. The drivers pushed the Macan S Diesel through the specifically-constructed test course at the usual 70km/h and found that it behaved “strange”. 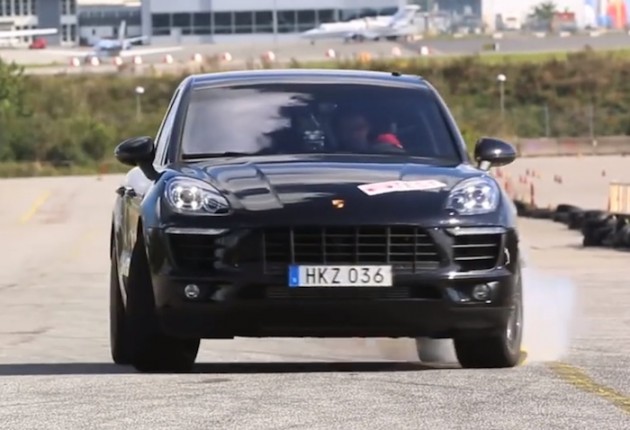 The publication has been known for its serious safety tests, especially with SUVs. In Nordic regions swerving for a moose is quite common. Swede journalist and test driver for Teknikens Varld Linus Projtz said,

“It doesn’t perform as it should, and as you can see in the footage, the front wheel locks in the middle of the manoeuvre and the car wouldn’t go straight ahead. The behaviour is extremely strange which we don’t see too often, and we’ve seen it unfortunately in more Macans than this particular one.”

For the test the Macan was loaded with weight according to guidelines set by the Swedish authorities. The journalists found that even with the weight removed the results remained “exactly the same” – around 150kg less.

Projtz ends the video saying he wants to know Porsche’s thoughts about its findings. Porsche replied,

“The precise, momentary application of brake force to the front wheel at the outside of the bend down to the low slip range minimises cornering forces to avoid critical or unstable driving conditions such as oversteer, rollover or detachment of the tire from the wheel.”

As you can see in the video, the momentary lock-up of the front wheel helps to break the biting grip which could eventually tip the SUV over. However, it does cause it to run off the path slightly.

The Porsche Macan shares one-third of its platform with fellow compact crossover the Audi Q5, and is manufactured in Leipzig, Germany. Prices for the Porsche Macan in Australia start from $84,900.