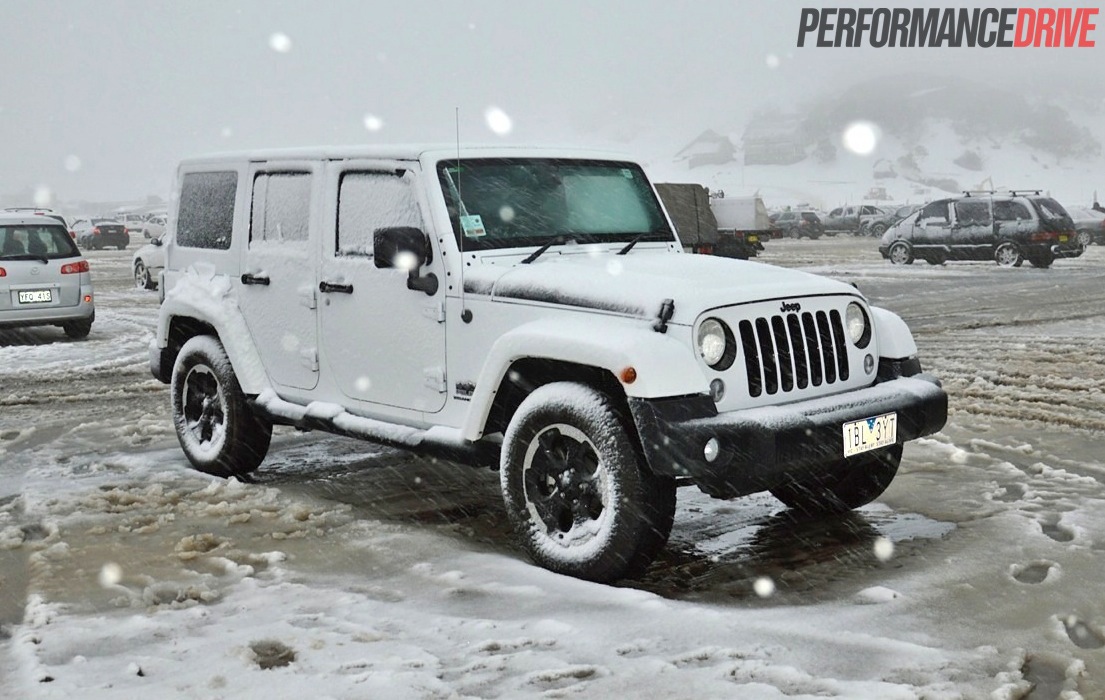 Following the Dragon edition from earlier in the year and the Rubicon X, the Jeep Wrangler Polar edition is designed to help reinvigorate the age-old nameplate and give buyers an opportunity to buy something exclusive. Of course, this is all without losing the awesome off-road expertise. So how does it shape up in Australia’s coldest conditions? And can the Wrangler rough it like it’s 1989 while keeping up with the modern competition? 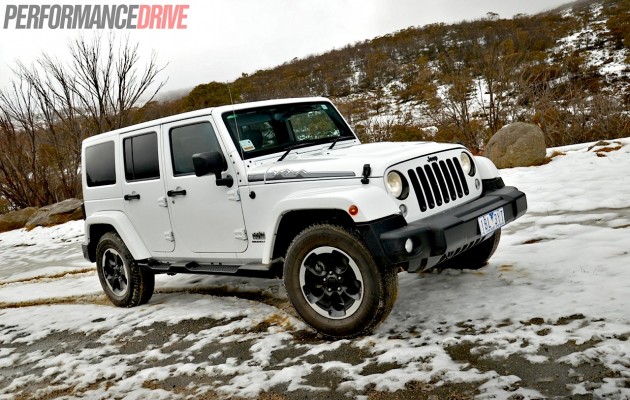 The Polar is based on the premium Overland variant and it’s available in two- and four-door forms. It’s packed with standard equipment and gets a smattering of unique ‘Polar’-themed additions and statement-making Mopar accessories. All versions are equipped with a 3.6-litre V6 petrol engine that produces 209kW and 347Nm, linked up to a five-speed auto.

Here we’re testing the flagship four-door, which retails from $50,000. If that’s over your price range, the Polar lineup kicks off from $45,500 for the Polar two-door. All are available in three exclusive colours; Hydro Blue, Billet Silver, and Bright White. 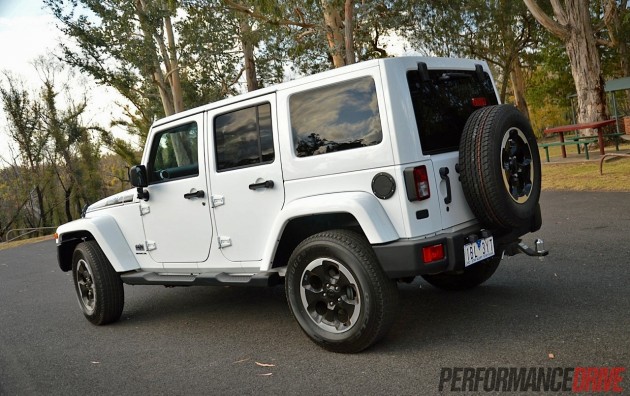 There’s something cool about a two-tone white and black colour scheme. It seems to be in fashion at the moment. On the Jeep, we think it creates one of the best-looking factory Wranglers out there, especially with the muscular Mopar bonnet complete with a ‘power dome’ in the middle. It might not look as mean or rugged as the off-road-focused Rubicon, but the Polar comes across as a little more sophisticated. It’s a vehicle that scrubs up very well for the evening and night occasions too.

Some of the finer attention to detail items include unique 18-inch black alloy wheels wrapped in 255/70 tyres, with matching front and rear bumper bar trimmings, a black Mopar fuel filler cap, and a handful of special Polar badges including one that reads 78° S and 106° E – a reference to the coldest temperature ever recorded (-89.2° C), in a place called Vostok in Antarctica.

Aside from the fashionable exterior highlights, the Wrangler Overland is actually a very luxurious package inside. You get nice big leather seats which are electronically adjustable and heated in the front, while the rear bench is also adjustable and presents a comfy and cushy place to hang out during long journeys.

You can always tell how big an interior is by the size of the centre console box. In the Wrangler, it’s Falcon/Commodore size. Headroom and legroom is more than acceptable in the front and in the rear, with plenty of shoulder space for three across the back. About the only restriction is the roll bar, which you do have to duck under when getting in the back. The upshot of this is you can take the entire roof off, so it’s actually a convertible SUV. The roll bar also features booming speakers so you can pump up the tunes even with the roof off.

Like all Wranglers the interior is full of character and never boring, if a little rugged. The door straps can get annoying as they don’t hold the door open, so it will swing back on you in the wind or on a hill. There are a few creaks and rattles too, but it feels pleasant and cheerful overall. Those that like a high driving position will love the Wrangler, however, we found the steering wheel column to lack adjustability.

Headlining the interior is the trick new Uconnect touch-screen interface. Thanks to the merger between Fiat and Chrysler, these Uconnect systems are popping up in various Fiat-Chrysler brand vehicles, even the good ‘ol Wrangler. It’s easy to use and offers full connectivity, with vehicle settings, a tyre pressure monitor, and satellite navigation. The unit is also connected up to an Alpine seven-speaker stereo which comes with a sub-woofer in the cargo area. 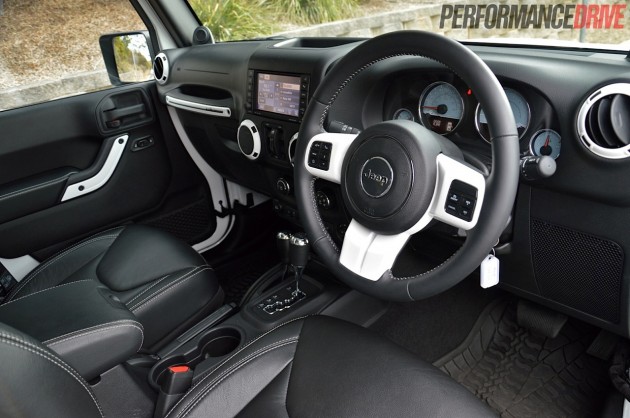 What better place to test drive a ‘Polar’ edition than by heading to the Australian Snowy Mountains? Specifically, the Kosciuszko National Park region and Perisher ski resort. The conditions were perfect for testing the all-weather ability of the Wrangler. They weren’t so perfect for skiing fans like us, with a blizzard battering down snow for almost the entire weekend – we saw temperatures hit -9 degrees.

Starting the engine in such conditions is no trouble at all for the Jeep. The Pentastar V6 fires up without a mere hint of splutter or cough. The transmission also seems happy right from the get-go, with no ‘warm up’ period slackening response or engagement. It is an older-style five-speed though with well-spread ratios, so at highway cruising speeds it does require upwards of 2500rpm.

There aren’t many 4x4s around any more that offer part-time four-wheel drive. Most SUVs today are either front-wheel drive or four-wheel drive. Offering both is a bit old-school but it is very effective as you can leave it in 2WD (rear-wheel drive in this case) on the highway to conserve fuel. Unfortunately, the Wrangler V6 is still rather thirsty even in 2WD mode, offering an official average of 11.7L/100km. We couldn’t manage anything better than around 13L/100km during our drive.

Okay, so fuel economy is not the best. What about that 209kW? Does it feel good? Flat out off the mark we timed 0-100km/h in 8.7 seconds. It is swift for a heavy-duty 4×4 under full throttle. However, when you drive around the suburbs it feels as though the transmission is programmed to be as economical as possible, upchanging into higher gears and feeling a tad long-legged and somewhat lazy. In fact, you need to give it a decent kick in the guts to provoke a downchange for overtaking. A more energetic six- or seven-speed auto could improve this. Maximum torque (347Nm) peaks at 4300rpm, which is high. Again, spreading the torque band across more ratios could fix this.

On the road body control is not exactly poised, with minor body roll coming into play fairly early on. The steering feels easy to manage though and you receive good levels of feedback, if a bit informal. In this specific market segment almost all of the proper rivals – real 4x4s – present a sacrifice that you just have to live with if you want legitimate off-road performance.

The Wrangler rides on a fairly old-fashioned platform using live axle suspension. Of course, it has been refined over the years but don’t expect crossover/SUV comfort and handling that we’ve all become used to. This is a veteran and it needs to be treated with respect when on the road. In saying that, we have driven the Rubicon with its detachable sway bars and it is even less composed on the road.

When it comes to off road, the Wrangler is hard to fault. With 223mm of ground clearance it is more than enough to clamber over moderate to more serious 4×4 terrain, while the 35-degree approach angle and 28-degree departure angle means sudden inclines and declines can be conquered without the bumper bars (or part of) becoming a new piece of Earth crust. Most of the undercarriage is protected by plating as well, so even if you do scrub out you can simply leapfrog over objects to some extent. In the snow the four-wheel drive system does well to distribute the power, with no single wheel wheelspin ruining forward progress. 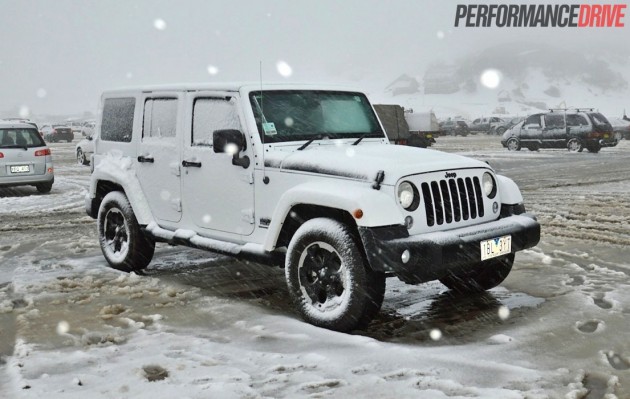 Overall, the Wrangler Polar is a fun and interactive vehicle. Once you factor in its off-road credentials you tend to enjoy its rugged personality. And with the luxury appointments, it’s actually a pretty cool vehicle we think. If we could change one thing it would be the powertrain. Chrysler has a fantastic 3.0-litre turbo-diesel V6 engine – seen in the Grand Cherokee and 300C – as well as an eight- and nine-speed auto. Blend these together and you’d be left with a much more economical and perhaps more capable package. Maybe we will see this with the all-new Wrangler in a few years?

CONS:
– Five-speed auto getting old
– V6 is thirsty and could do with more low-end torque
– Removing the roof is not a 2min job
– Door hinges/straps don’t hold doors open 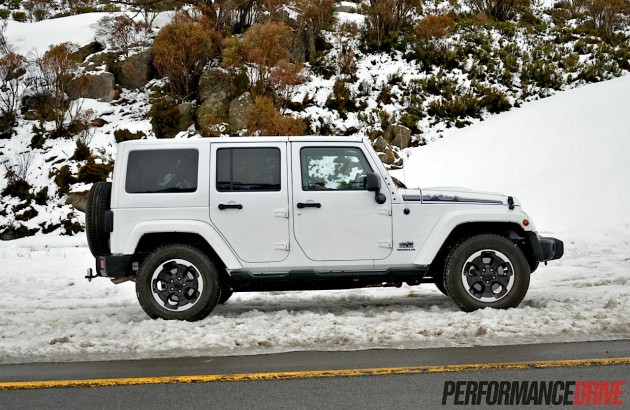