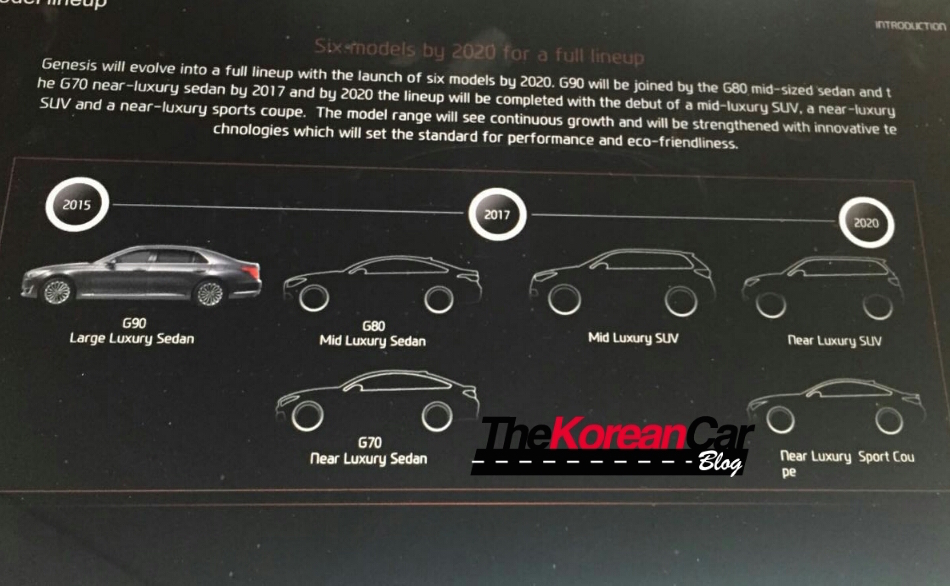 Some details of Genesis’s future lineup seem to have been slipped out, with confirmation of a mid-size sedan called the G70 and an all-new mid-size premium SUV. 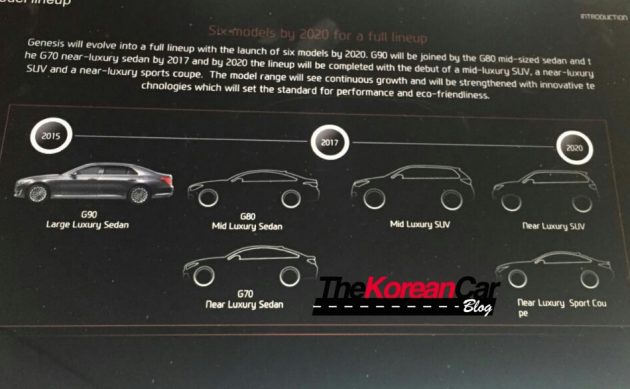 A timeline of Genesis’s future product plans has been published by The Korean Car Blog, believed to have originated from official documents, showing an outline of the next couple of years.

We can see the new G80 sedan will arrive later year, essentially coming in as a replacement to the current Genesis sedan. This goes up against rivals like the BMW 5 Series and Mercedes E-Class.

Also later this year the premium Hyundai-owned brand will step into the mid-size premium sedan segment for the first time, according to the timeline. Such a model has been heavily reported and rumoured over the last year or so, and then reinforced by the debut of the New York concept earlier this year.

The car, set to be called the G70, is expected to come with a range of powertrain options, potentially including a 2.0-litre turbo-petrol producing around 180kW, along with a hybrid option that pairs a four-cylinder with an electric motor assist system.

Perhaps the most interesting news to come from the purported timeline is evidence of some SUVs. Very little information is known about these at this stage, but it looks like we could be about to welcome a mid-sizer and a compact SUV. These could be based on existing Hyundai platforms, albeit with an extensive luxury makeover, becoming the brand’s first-ever SUV models.

Later down the track it looks like we will be welcoming a coupe model, likely based on the G70 sedan. This is being viewed as a modern successor to the original Hyundai Genesis V6 coupe from a few years ago. This would go nicely up against the BMW 4 Series and Mercedes C-Class Coupe.

It all looks very exciting. Of course, we will have to await official confirmation before locking anything in just yet, although, judging by the popularity of SUVs this is likely a market Genesis won’t want to be missing out.