Certain to create a buzz, the all-new Nissan Altima V8 Supercar will make its public track debut at the V8 Supercars Sydney Telstra 500 event this weekend. The car will be taken around for a few laps of the circuit. 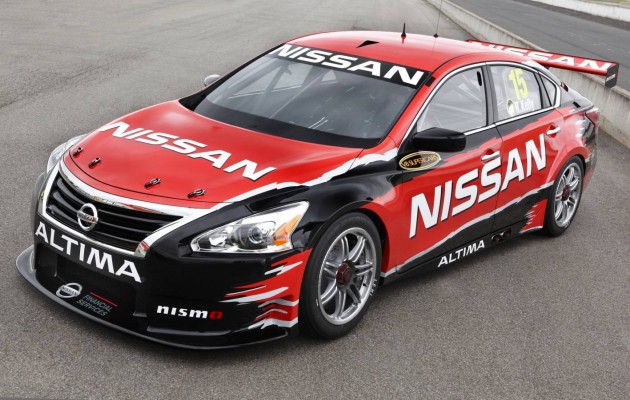 This will be the first time fans can get a glimpse of Nissan’s entry to next year’s season. The Altima will be on display for much of the weekend, but more interestingly, driver Rick Kelly will demonstrate a few laps in the car.

As you may already know, the Nissan features a vastly different V8 engine to the Ford and Holden counterparts. It’s still a 5.0-litre unit, however, it features more advanced technology such as double overhead cams, all developed in part with Nismo. It will be interesting to hear what the racer sounds like in comparison.

Rick Kelly was understandably excited to jump behind the wheel of the new car. He recently said,

“While I’m sure that the fans will be excited to see the Altima in the flesh for the first time, there’s no doubt that the most excited person to hear this news confirmed is actually me.

“I’ve been busting to get my first drive of the new Nissan all year long as we’ve been watching the car take shape in the various departments of our team workshop. So to get the chance to drive the Altima V8 Supercar in front of a crowd at the Sydney Olympic Park street circuit is going to be a fantastic buzz.”

The car will be on display at the V8 Supercar Pit Pavilion from Friday onwards, with the laps taking place at approximately 11:10am on the Sunday.