Images from Italian publication Quattroruote claim to preview an upcoming Lamborghini SUV concept. Rumour has it the new model will be a spiritual successor to the Lamborghini LM002. 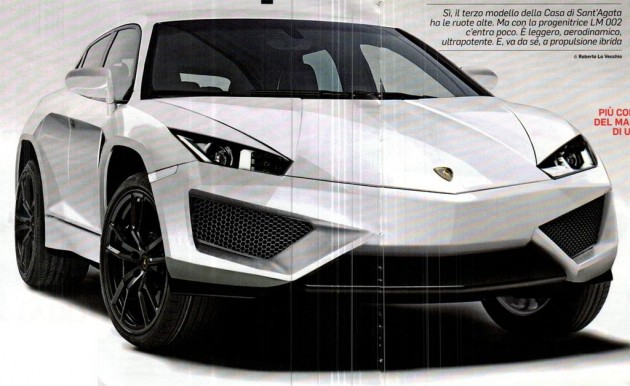 Lamborghini CEO Stephan Winkelmann said last year that the company was planning an “everyday” model, with reports pointing to a possible crossover, shooting brake or SUV. Winkelmann told Reuters last year, “We are going to have a third model. It has to be an everyday car. We want to have a car which is able to be used on a daily basis.”

Quattroruote is now reporting that these are leaked images of a concept version of a new SUV/crossover that is being planning by the company. Reports say the vehicle will be built on a Porsche Cayenne platform, under the Volkswagen ownership umbrella, and be powered by a V10 engine producing around 425kW of power.

If this is the case, it will be the most powerful SUV on the market, and likely the fastest. A hybrid version is also said to be on the cards, producing even more power, up to around 515kW. However, this isn’t expected to see light of day until at least 2015.

It’s all very exciting even though it is in very early, speculation stages. The Italian report says the concept pictured here will be unveiled in full at the 2012 Beijing Motor Show in April. We look forward and hope to see it eventuate.