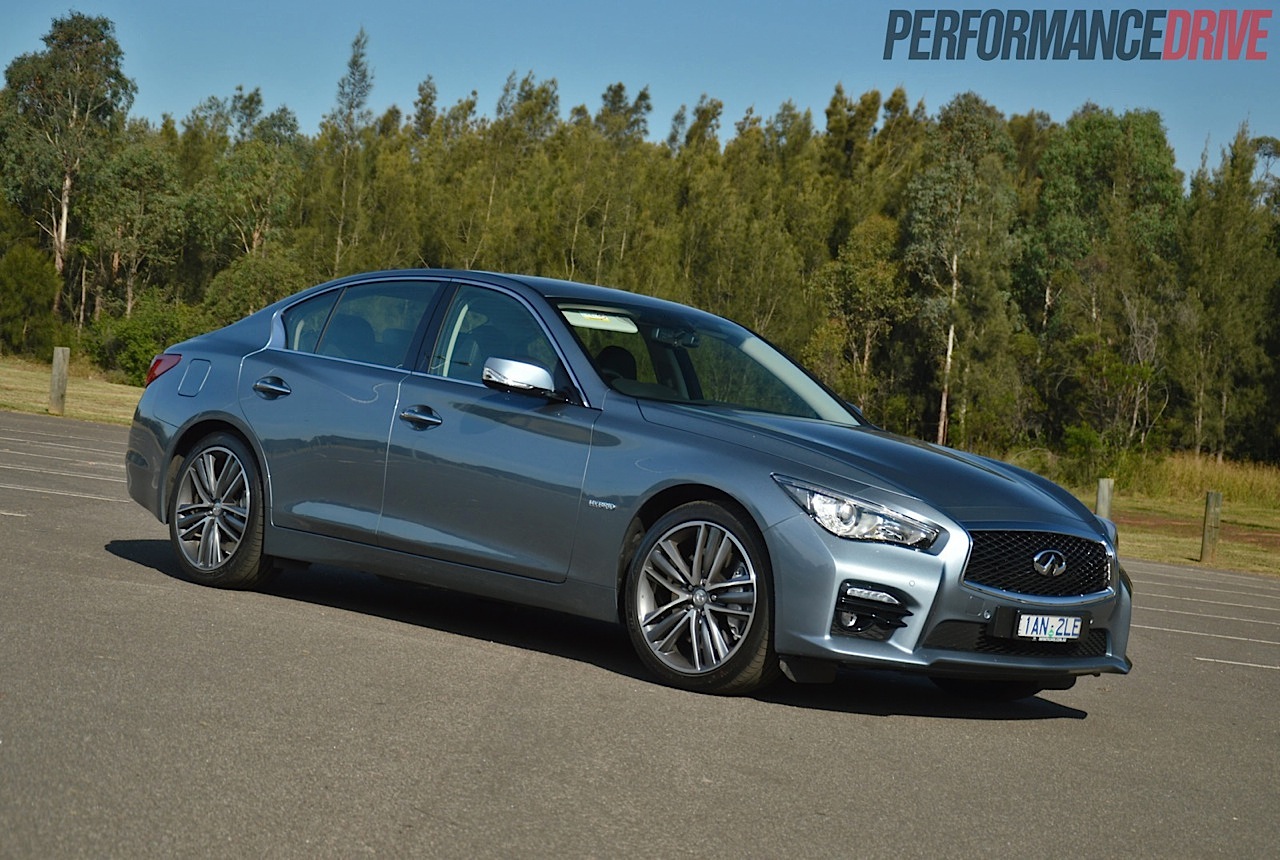 You can forget all preconceptions you have about a hybrid. The new Infiniti Q50 S Premium proves hybrids needn’t be quiet, slow or boring. No, this is the exact opposite. 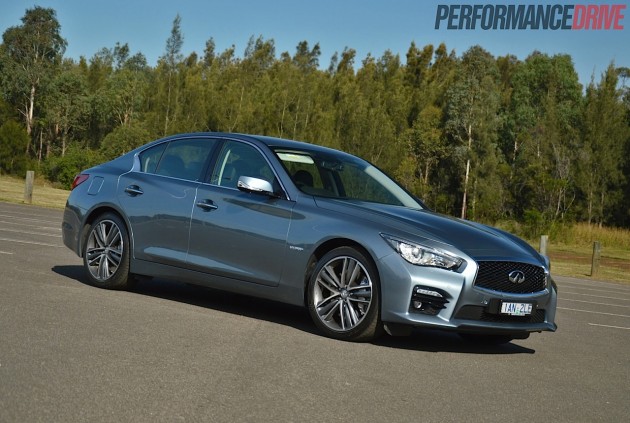 The Q50 is the first of the new-age Infiniti showroom. Although there have been many generations before this available in the US, including this car’s predecessor, the Infiniti G sedan, this is the first of its kind in Australia.

It’s not an all-new model, despite the marketing fluff that you might hear. It is still based on the widely used Nissan FM platform that underpins the Infiniti M, Nissan Skyline, 350Z/370Z, and the previous G sedan. However, almost all of the interior and everything about the overall package is all new and significantly modernised.

It takes on some of the toughest rivals in the industry, including the comprehensively-established BMW 3 Series, the very popular Mercedes-Benz C-Class, and the ultimate businessman’s suit, the Audi A4. It also takes on the other offering from the land of the rising sun, the Lexus IS.

For Infiniti to keep up with all of these it has introduced two different engine variants in Australia, and three trim levels for each; GT, S, and S Premium.

The entry-level uses a Mercedes-derived 125kW 2.2-litre turbo-diesel, while the other is perhaps under the most pressure in this segment, the flagship V6 hybrid as tested here.

The hybrid uses a 3.5-litre V6 with an electric motor system to generate 268kW of power and 546Nm of torque. As you can probably judge, this is a serious amount of power for an executive sedan, especially for something that carries the hybrid stereotype. In fact, it is the most powerful hybrid in its class.

To cope with all that power there is an all-wheel drive system and a seven-speed sports automatic transmission. (The diesel makes do with a conventional rear-wheel drive setup.)

Prices start at a more attractive price point compared with the German rivals, and about on par with the Japanese Lexus. For this best-of-the-best S Premium hybrid you’ll need to write a cheque for $73,900. (The base model diesel GT starts from $51,900.) 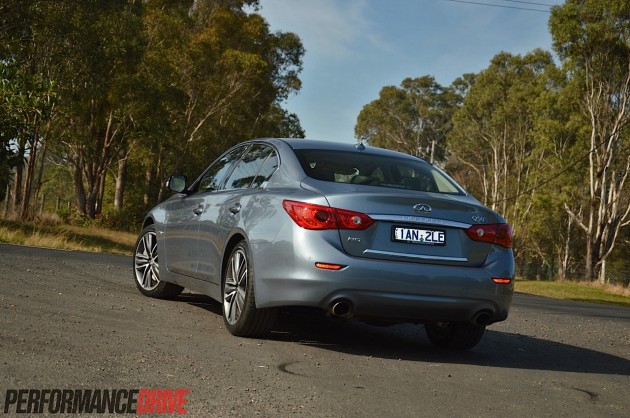 Marching into the premium sedan segment up against the big guns presents a bit of an issue, as this has to try harder in order to stand out and cut through the crowd. On exterior design alone, it certainly passes the first test. We think it looks striking and modern. And out on the road that’s the feedback you get.

At the front there’s a large polished mesh grille, a sort-of in-built front spoiler lower down, and suave headlights with their own LED semi-circles. At the back it’s not as crisp in our opinion. It looks like a previous-gen model. It’s a little inconsistent compared with the sharp front end.

When we first jumped into the Q50 we had a preordained fret that it would be behind the times; an old American layout with ’90s gadgets taken from the Nissan parts bit, mono-tone materials, lots of plastic, and too much chrome. How wrong we were.

It’s smart in here. Infiniti has gone for a mostly black layout with some good quality materials, especially on the dash and door trims. Everything feels tight and together as it should, with an airy, serene cabin atmosphere.

Situated in the middle of the dash is a superb twin-stack set of touch-screens. The bottom one is mainly reserved for apps (yep, like what’s on a teenager’s best friend) and looks and feels like an iPad. It’s very intuitive and responsive to touch. While the one above is mainly for the standard sat-nav. It comes with a rotary controller down near the gear lever so you don’t have to reach up all the time.

This layout is one of the better setups we’ve seen in this segment, both in terms of sheer graphics and overall user-friendliness. It also gives the cabin a great focal point. 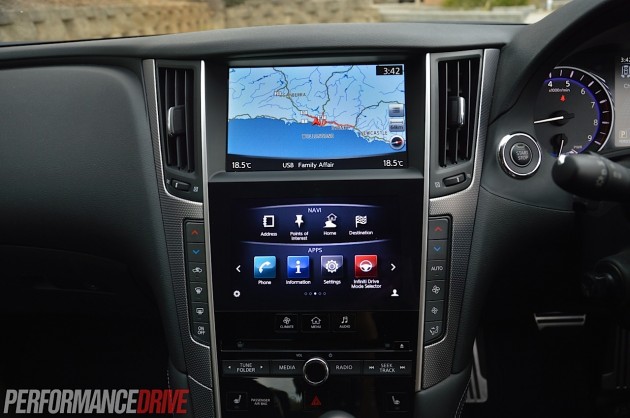 Cabin space is good for this segment. If anything, it is one of the bigger cabins, with respectable headroom and shoulder space in the front, and decent legroom in the back. The driveshaft tunnel in the middle at the back isn’t as intrusive as it is in some of the opponents’ either.

In terms of standard equipment the S Premium comes with everything and few options to blow that initial price tag out of proportion. There’s a fully electric direct-adaptive steering system with active lane control, dual-zone climate control with a charcoal filter, paddle shifters, a sunroof, and a high-quality BOSE 14-speaker premium stereo that sounds like you’re inside a recording studio.

Various driving modes are also on hand to help the car understand your preferred driving style, including a green mode that relies on the electric motor as much as possible.

The radar cruise is, like many others, not quite perfect. There are still some hiccups to be ironed out, such as when a car pulls in front of you on the highway going 2km/h faster. In such case the car automatically brakes and then speeds back up almost straight away, wasting petrol. The best system out there – from Volvo, no doubt – sees that the car in front is going faster and holds off on applying the brakes for no reason. 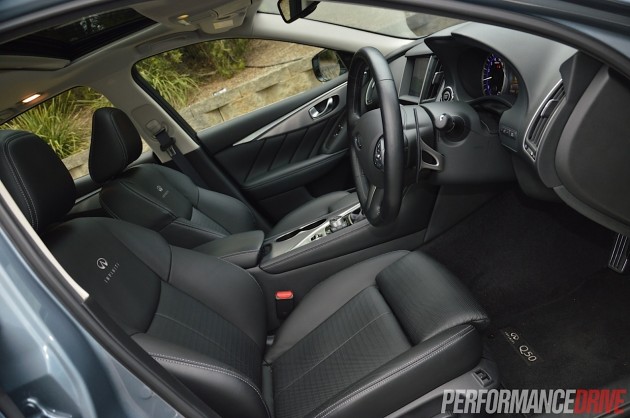 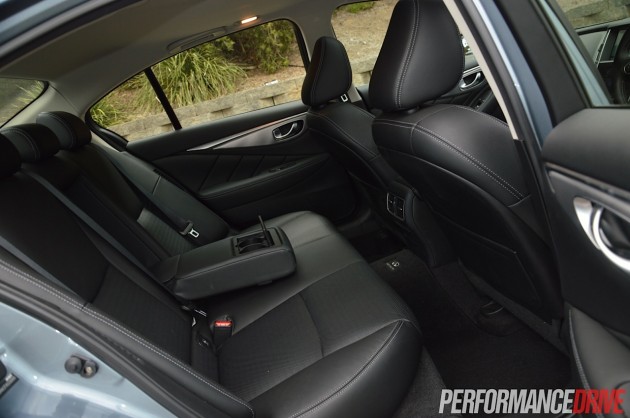 On your first drive you’ll immediately appreciate the tight and very direct response of all controls. The steering is sharp and requires minimal turns, and the body is super-composed and not bothered by last-minute turns or tricky roundabouts. In that sense, it’s very easy to thread through the city and small streets as it is nimble and quick to move.

In these conditions the hybrid system is able to prove its point, driving without the V6 and on the electric motor alone. This means you’re using zero fuel. We found some minor hesitation in the transition from electric to hybrid modes in slow stop-start conditions.

As a bonus, this mode turns the Q50 into a relaxing and super-quiet drive. It’s so soothingly silent, Infiniti felt the need to install a faint reversing beep to warn pedestrians.

Along the highway it’s much the same. The platform is solid and very secure with excellent high-speed stability. If you’re gentle enough on the throttle the V6 will switch off automatically and you’ll be wafting along purely on battery power – not many other hybrids on the market are able to switch off the petrol engine and drive on electric power at 100km/h.

Of course, petrol power will kick back in if you reach a hill or require overtaking acceleration. The transition is seamless above 40km/h, going from electric-only to combined power like a baton being passed from runner to runner. It is one of the nicer systems out there in normal driving conditions. And if you’re always carefully on the throttle you can enjoy an average economy in the low 7L/100km region.

If you suddenly become excited by a mountain road or feel the urge to have a bit of a spirited drive, you might be a bit disappointed. As we said, when you first drive the car it feels tight and taut; the makings of a great sports sedan, right? Not really.

If you grab it by the scuff of the neck and throw it down some corners it has the finesse of a bodybuilder playing tennis. The heavy weight (1853kg) is communicated to you immediately, and it’s slow to respond and quite unsettled switching directions. The steering also becomes overly weighted and touchy. Unfortunately, it just doesn’t feel as comfortable driving fast through corners as any of its rivals.

The throttle response is sharpened up a lot in sport mode and straight-line performance is outstanding. It just keeps accelerating, on and on and never lets up thanks to the huge torque figure. We timed 0-100km/h in 5.4 seconds, which is a cracking time.

However, we experienced noticeable delays and hesitation when jumping on and off the power in between corners. The transmission pushes and tugs and seems to be a little confused by high-tempo driving, and the electric motor has a hard time keeping up. It seems like the overall power output and acceleration capability is too high for the rest of the car and its components to handle. (Keep in mind this is only when driven vigorously along a tight windy road.)

It might be easy to forgive the Q50 hybrid though as it is trying to do many things at once; two different motors turning all four wheels. It’s supposed to be a luxury car as well as a sporty sedan, and most buyers are probably never going to drive it like it’s an outright sports car. But for us, we’ve tested all vehicles in the same conditions and all of the rivals in this case respond with significantly more confidence, balance, and ability.

BMW’s hybrid 3 Series in particular is subject to similar burdens associated with hybrids, such as the weight of the electrical components and so on, yet it manages to hide most of it and get on with driving. In fairness it is only rear-wheel drive. Perhaps the $20k price difference brings justice?

The Lexus IS 300h, on the other hand, cannot keep up in terms of sheer power and speed, but it too feels and behaves more like a teammate in sporty conditions, and encourages you to enjoy tracing some tarmac spaghetti.

Fortunately, when it comes time to slow things down the brakes are seriously powerful and relentless. There’s twin-piston calipers up front – like on most Infinitis – providing fade-free performance for as long as the road takes you. Pedal feel is good when driven hard, but might be a bit touchy for some in prosaic conditions.

Overall, this a gratifying piece of stately sedan. It’s very smooth on the freeway with grinningly effortless overtaking power and enough hybrid technology to keep up with, and in some cases supersede, its rivals. 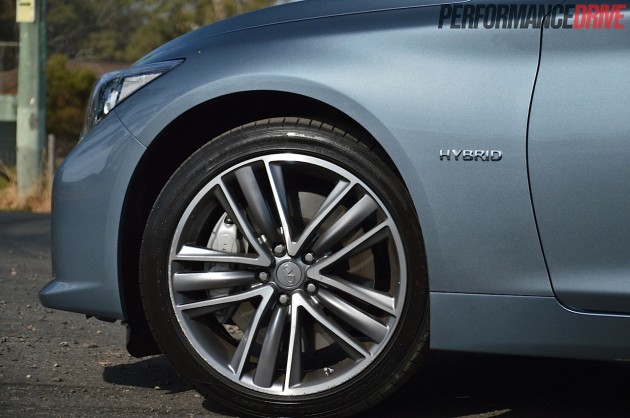 As a first crack at the mid-size premium sedan segment in Australia we think the Q50 should be on your short list. It has some really desirable traits. It might not be the ideal sedan if you live at the top of the Stelvio Pass, but it more than makes up for that with fantastic in-car technology and useability, outstanding economy for the performance, and all wrapped up in a radiant and unique design.

CONS:
– Cumbersome, heavy and bothered when driven hard in corners; too much power for the car to handle?
– Road noise 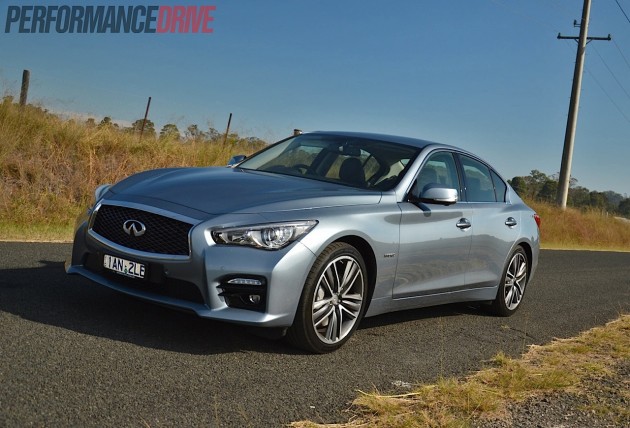