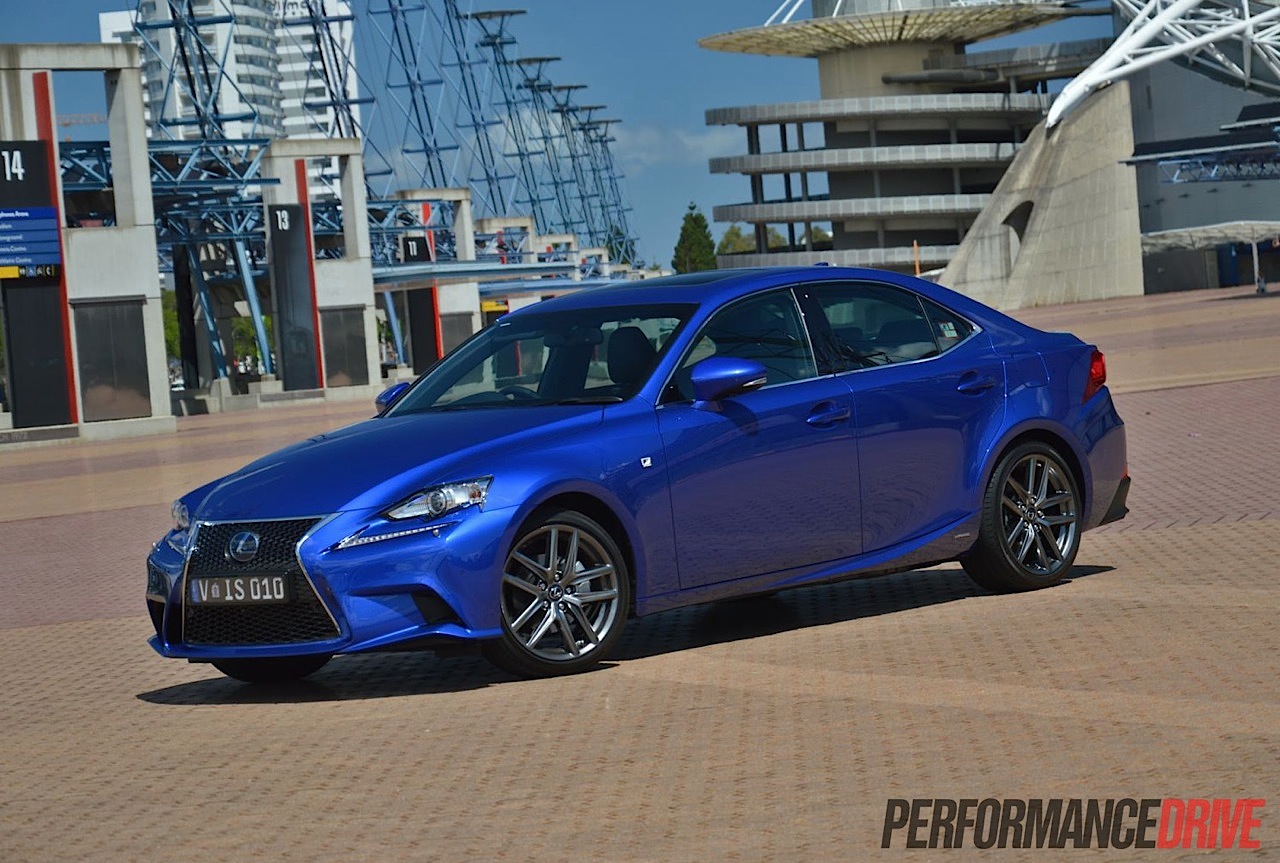 For the first time ever Lexus has applied its renowned hybrid technology to the mid-size IS sedan. Here we take a look into the IS 300h F Sport variant which is the sportiest in the two-tier lineup. 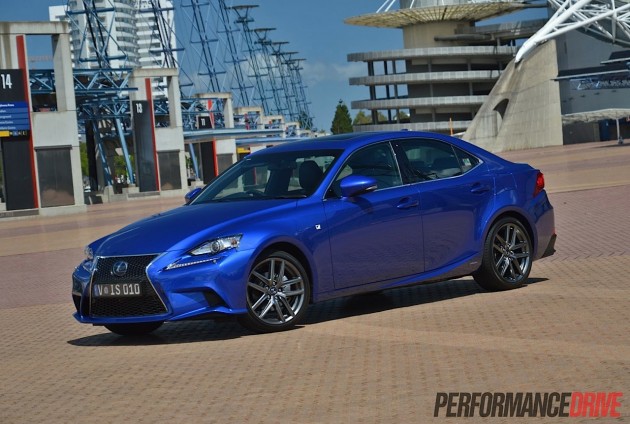 Lexus is planning to introduce a lot more hybrid models in the future. In fact, it wants 50 per cent of all its vehicles sold to be hybrid-equipped. This would significantly drop the company’s overall emission and consumption rates.

The 300h gets the latest IS styling update with sharper exterior details and that impossible-to-miss new spindle front grille layout, as well as a completely overhauled interior with more technology than ever before. 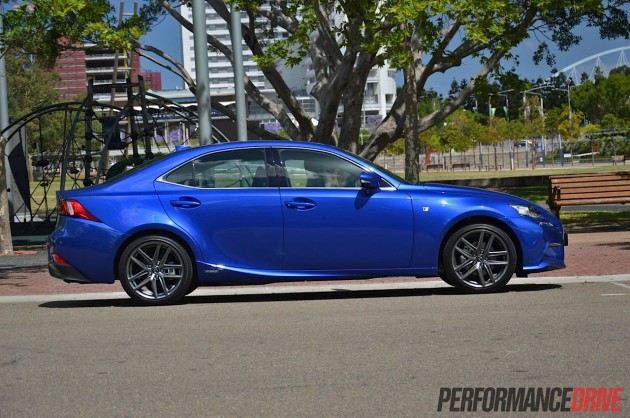 Some cars in this segment offer a simple and conservative cockpit, with flat seats, a vanilla decor, and a straight forward dash layout. Frankly, it can be quite boring. There’s none of that in the latest IS. It’s active and energetic and you can immediately sense the whole layout was created to stir some emotion.

It was also created to be engaging with the occupants. The main chunks of the dash sprout out and are presented to you to save you having to go and hunt for the controls and functions. The middle fascia is slightly skewed toward the driver too for a more interment connection.

Lexus has gone for a modern and classy decor, using titanium-look trimmings and touch surfaces with lots of exposed-stitch leather. Some of the stitching is done in white for contrast. It’s very cool.

As with the rest of the latest IS range, the interior space has grown from the previous version with an extended wheelbase adding more legroom, particularly in the back. It’s still more on the confined side compared with the rivals though. Larger framed people might find the front seats a bit small, and rear legroom, although improved, feels like it remains the tightest of this segment.

One of the great reasons to appreciate the Lexus brand – aside from the fact it built the spectacular LFA supercar – is the packaging the company puts together. Instead of faffing around with options and surprising customers with a list of things you don’t get, the IS comes with everything that’s available to it. The Luxury and the F Sport are the only ‘options’ you can go for, both of which provide an impressive list of standard equipment.

An LCD interface with digital radio and DVD playback, satellite navigation, and an eight-speaker premium stereo are standard on all variants. There’s also dual-zone climate control, a rear-view camera with parking sensors, power front seats with heating and cooling functions, and a throng of safety gizmos and technology to gain it a full five-star ANCAP rating.

The standard features list is extensive. If you were to look at some of the German rivals, many of these appointments are not standard and stack up to an eye-opening sum slapped on the end of the original purchase price. 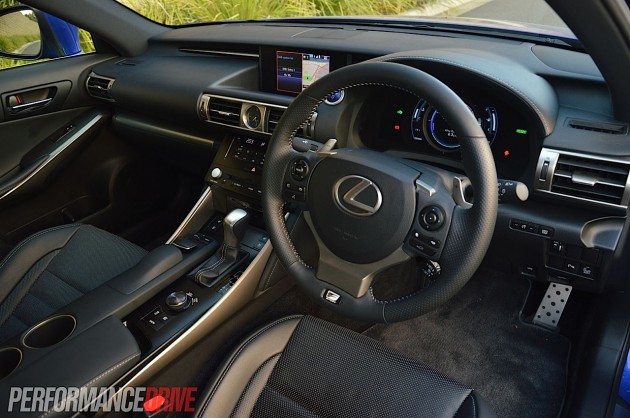 So, what do you get with the F Sport? It’s designed, as you can probably guess by the name, to give the IS a sporty character. You end up with a bespoke bodykit with a dominating black front grille, 18-inch alloy wheels over the Luxury’s 17 inch items, and a set of sports seats covered in soft, perforated leather so they breathe, with a neat F Sport steering wheel topping it off.

You also get a very cool TFT LCD instrument cluster which is inspired by the unit that’s used in the LFA. Since the whole unit is TFT LCD, it can be customised to show the tacho in various colours and there are a number of display options on offer. It slides across to reveal trip details, live economy updates and a hybrid status meter (see video below).

Speaking of the hybrid, the IS 300h is propelled by a 2.5-litre four-cylinder petrol engine producing 133kW and 221Nm. It’s supported by an electric hybrid system which incorporates a 230V nickel metal hydride (Ni-MH) battery adding 103kW and 300Nm, although, the combined output is rated at 164kW.

The system is capable of driving in eery silence on electric power alone but only during very low speeds and under low loads. There are five driving modes to select from within the cabin too. The ‘EV’ mode tells the computer to slacken off throttle sensitivity as much as possible and it relies on the electric motor as much as it can. The sport mode, on the other hand, offers sacrifice-free motoring with maximum power and performance called from both systems. 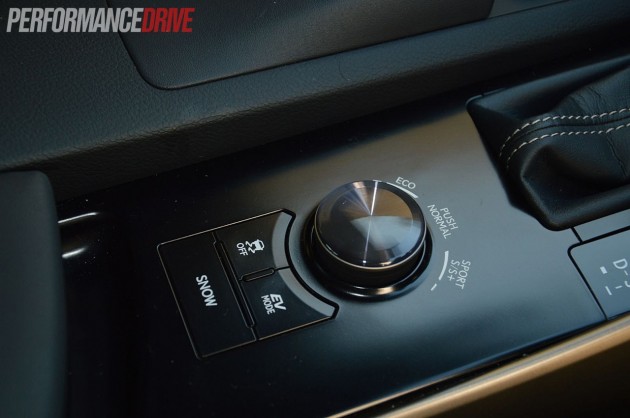 You’ll like the way the new IS drives. It’s really quiet and smooth with very little outside noise entering the cabin. All of the materials and the general feel of the cabin reminds you that this is a genuine premium product.

Lexus says the new IS has been created to be more of a driver’s car. When you first tip it into a corner, the notion becomes a reality. The F Sport’s sports suspension keeps the car flat and dedicated while the steering provides good, communicative feedback; all hallmarks of a proper driver’s machine.

When you start to demand more from it through some tighter twists and turns, the additional weight of the hybrid system does become apparent. The 300h weighs 1720kg as opposed to the IS 250’s 1645kg mass. It’s actually heavier than the IS 350 as well, which weighs 1685kg.

It’s not that it feels like a big lump of cushy spongecake, don’t worry, it’s just that it’s not quite as sharp-edged or as composed as its non-hybrid brothers when you really push it. There is some body roll and the front end becomes a little vague with minor steering kickback upon corner exits. At up to eight tenths, it’s as pleasurable as its brothers.

Part of this disappointment comes from the continuously variable automatic transmission which does nothing to brighten up or even celebrate the occasion of acceleration. 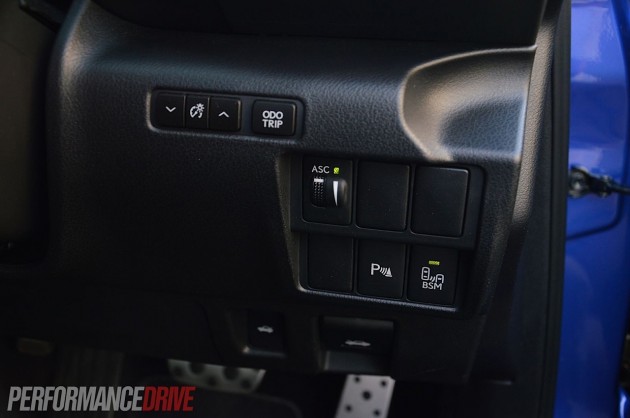 CVTs are a lot more fuel efficient compared with the equivalent torque-convertor auto, however, for pure driving enjoyment the latter would be a better option in our opinion.

Lexus has developed a rather strange technology to help liven up the driving character. It’s called Active Sound Control and what it does is use speakers in the cabin to create ‘sporty’ engine notes in correlation to your attitude with the throttle. The speakers are separate from the audio unit so it runs without interrupting music and so on.

It’s really weird at first. It kind of sounds like there is a VW Golf GTI in your blind spot that happens to be accelerating at the exact same rate as you. You can turn the volume up or down, or turn it off completely. After trying to get used to it it’s just too transparent for our liking. The engine note given off is obvious and even a bit out of time with the actual engine revs. It’s a good try by Lexus but unfortunately we think it needs more work.

Overall, the 300h is a blunter instrument than its regular 250 and 350 V6 counterparts when it comes to driving character. But if you’re thinking of buying a hybrid, chances are, you are going to be more interested in economy than pure driving enjoyment. And for that, the 300h shines above and beyond.

We averaged just 6.7L/100km during our week with the car. The official rating is 4.9L/100km. If you were to drive it gently and smoothly and in the ‘Eco’ driving mode we have no doubt you could get quite close to the official figure. It’s extremely economical. 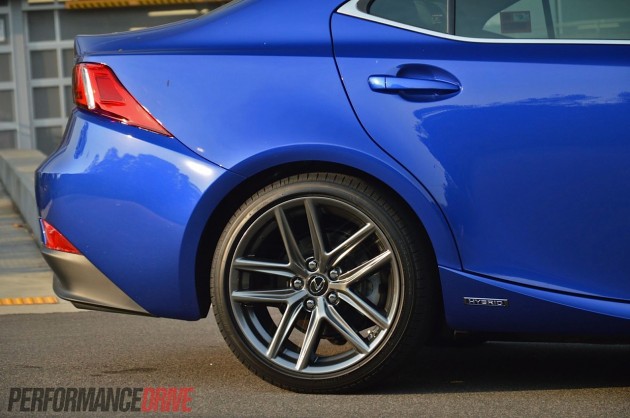 It’s a Lexus, so you’re getting that renowned build quality, whisper-quiet driving (when you turn off the ASC), and lots of premium luxuries as standard.

As a ‘sports’ sedan, no matter how hard the F Sport package tries and how good it looks, it’s not the sports sedan you might have hoped for. However, the IS has never been available with a turbo-diesel, so for Lexus fans, the 300h is the super-eco offering. And as an economical stately sedan, it’s brilliant.

You get 80-90 per cent of the IS’s inherent driving purity and 100 per cent of the fuel economy benefits of a hybrid. With a friendly price tag that won’t grow and grow with options, it’s a competitive proposition in this tough market segment.

CONS:
– Boring CVT auto
– Hybrid 300h not as sharp or nimble as other IS models; heavier
– Interior more confined than rivals 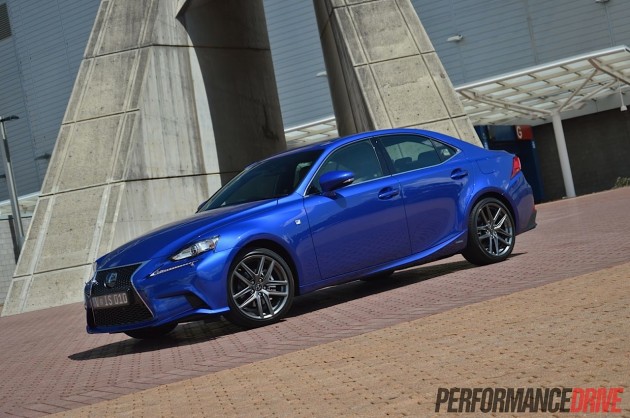