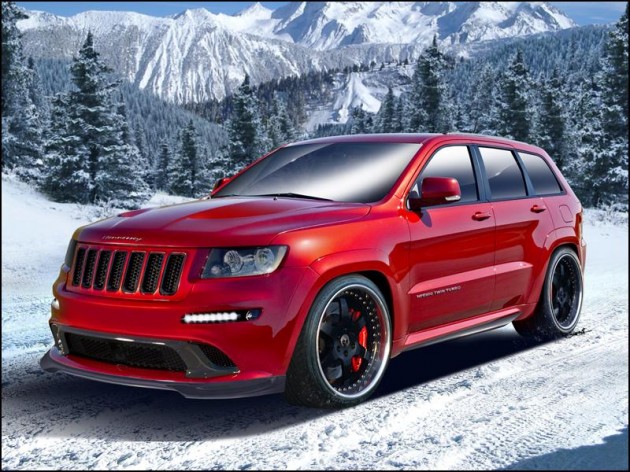 Hennessey Performance is renowned for tuning American muscle cars to ballistic levels, with this latest one takes on the muscle SUV scene. It is just a preview of what the company is planning, but it will feature the company’s HPE800 Twin Turbo engine package.

This consists of an extensively worked 7.0-litre HEMI V8 engine pumped full of air and fuel by two turbochargers. Power levels are taken from the factory SRT8’s 347kW and 630Nm, out to a whopping 600kW (805hp) and 1115Nm.

To make sure the big beast stays true and can pull up alright, Hennessey Performance will also add a massive 384mm Brembo disc brake package and sports lowered suspension into the package.

As for performance, the Hennessey Jeep Grand Cherokee SRT8 twin-turbo monster will hustle from 0-100km/h in just 3.1 seconds, and do the quarter mile sprint in 10.9 seconds at 209km/h.

Company founder and president John Hennessey describes the monster as a vehicle “designed for the performance minded driver who lives in Aspen or Moscow and wants to be the fastest in all weather conditions”. Nicely put. The company also says,

“Who Needs Reindeer When You Have an 800 HP Twin Turbo Sleigh?”

We’d eagerly apply for Santa’s job if this is his ride.