A very rare and completely original 1973 Porsche 911 Carrera 2.7 RS Touring is going up for sale in the UK, through Autofarm. The iconic and highly sort-after sports car was previously owned by rally car driver ‘Dimi’ Mavropoulos. 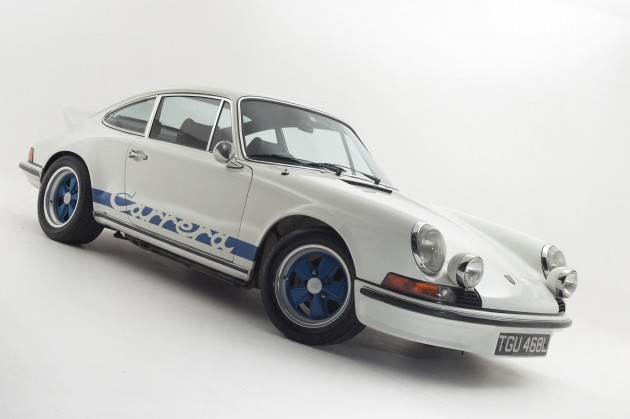 For Porsche enthusiasts, the 1973 Carrera 2.7 RS is the one to have. It’s extremely rare, with this version being one of just 94 ever made in right-hand drive, but not only that, it’s also known to be a superb driver’s car with plenty of power and a lightweight mass. Autofarm’s founder ,Josh Sadler, recently spoke about the model, saying,

“The 2.7 Carrera RS is revered by many as one of the finest 911s ever. Improved suspension, a larger engine and sporting the iconic ‘duck tail’ spoiler ensured it was hugely successful on the track, yet is still highly rewarding to drive on the road. This blend of performance and usability has been a Porsche trademark ever since.”

In its factory form, the 2.7 RS comes with a 2.7-litre naturally aspirated raw-revving flat-six engine producing 150kW. The figure might not sound high by today’s standards, however, the RS Touring weighs in at just 1075kg, providing an excellent power-to-weight ratio.

This example comes with 135,000 miles (217,350km) on the clock, and is completely original. It’s never suffered from any sort of significant damage, and it hasn’t been modified. Sadler said,

“Autofarm has a long relationship with this car and our own records detail all the servicing work that we have done since 1981.”

The awesome classic is expected to sell for around £200,000 (around AU$327,200 after a straight conversion). Head over to the Autofarm website for more details.