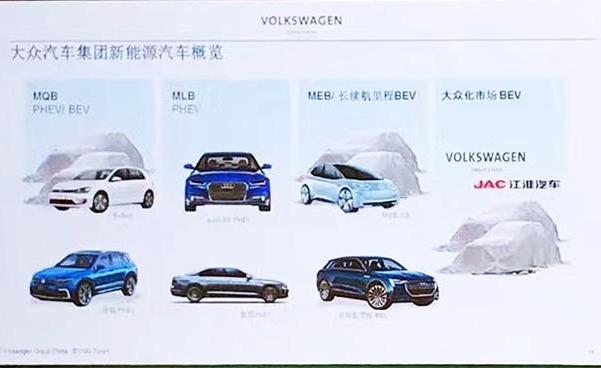 A leaked document published in a Forbes report from a product presentation has highlighted Volkswagen’s plans to introduce eight ‘New Energy Vehicles’ to the Chinese market, which range from electric vehicles, plug-in hybrids to hydrogen fuel cell powered vehicles.

As every major international carmarker in China must team up with a domestic producer, Volkswagen’s partner JAC will apparently be part of the product plans, along with Audi.

Volkswagen is set to field an e-Golf electric version of the popular hatch, and a Tiguan plug-in hybrid SUV with a 2.0-litre 164kW turbo four with an electric powertrain due in 2018.

A plug-in version of the Phideon large sedan based on Audi’s MLB architecture with a 182kW 2.0-litre looks to be due this year. Then of course there’s the production version of the I.D. concept shown at last year’s Frankfurt motor show, due in 2020.

Audi’s plans for China reportedly include a PHEV version of the China-only A6L long wheelbase, using the same powertain as its platform mate, the Phideon, and the Q6 electric SUV due in 2018. In addition, the JAC brand is expected to launch a compact sedan and SUV to cover the affordable quarter of the market.

This is in stark contrast to Nissan’s strategy, which is to launch a US$8000 (about AU$10,700) late next year, making it the most affordable mainstream electric car, aimed at the Chinese market.