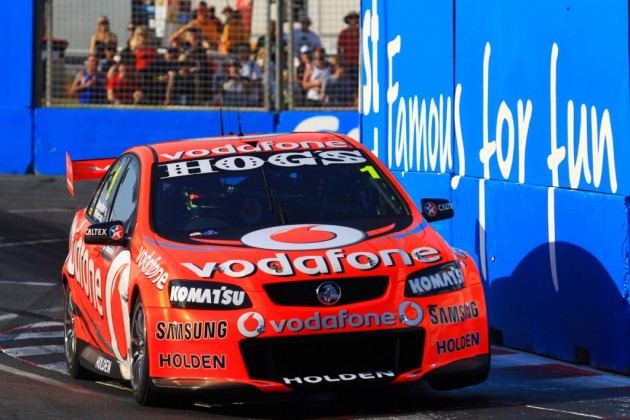 With the international co-drivers all starting in the car, just 17 of the 28 cars made it through the shortened race  (because of time constraints) and several didn’t even make a single lap.

Former F1 driver Tonio Liuzzi put his TeamBOC Commodore on it’s roof after slamming into two other cars in a massive pile-up at the race start.

The carnage meant the race was restarted, but again a massive pile up occurred.

Just 22 cars made it to the third grid restart, which finally saw the racing get underway.

At the end of the internationals stints, took over his TeamVodafone Commodore from Bourdais and jumped Ford Performance Racing’s Will Davison.

Bourdais and Davison’s co-driver Mika Salo had nail-biting battles on track but somehow kept their cars off the walls. Unfortunately Davison could not do the same, putting his Falcon into the tyres on his first lap in the car.

Tekno Autosports Holden drivers Jonathon Webb and Marc Lieb drove smartly to grab second while a fast-finishing Mark Winterbottom put himself and co-pilot Will Power on the podium.