We’re not normally about bikes here at PerformanceDrive, but we simply couldn’t let this one pass. It’s a jet-powered Suzuki Hayabusa. That’s a motorbike, powered by a turbine jet engine. 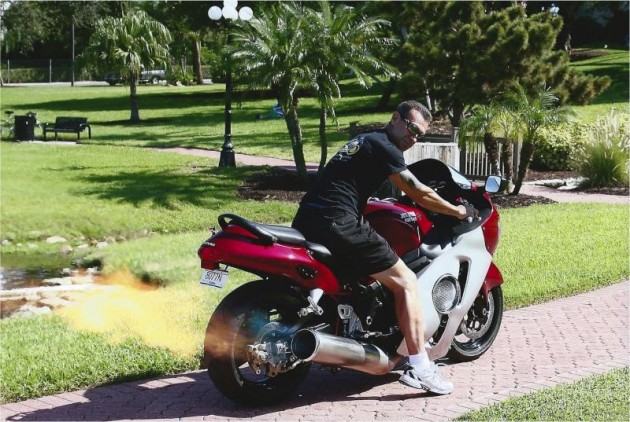 You see, for Tony Pandolfo of Orlando, USA, the Suzuki Hayabusa (aka, the world’s fastest bike) is simply not fast enough. So what he did was remove the 1.3-litre high-revving four-cylinder engine – producing 129kW and around 130Nm – from the bike, and fitted a AlliedSignal jet fuel starter (JFS) in its place.

The unit is apparently sourced from an F-14 fighter jet, and produces around 406Nm of torque. It runs on K2 Kerosene or Jet A fuel. Pandoflo said in a recent Daily Mail report that the turbine has actually been turned down for usability purposes.

Having a jet engine of course means its automatic, and because of this, Pandoflo says that anyone who can ride a scooter can ride it. He says,

“It is an automatic and handles exceptionally well. It is just like a Hayabusa except it sounds like an F14 fighter jet charging down the runway. It is like a jet at lower speeds but as it picks up it sounds more like a travelling missile.”

A missile alright, it’s sure to get a few onlookers rubbernecking. Especially with that turbine outlet doubling as a flame thrower.

The jet-powered Suzuki Hayabusa is up for sale if you’re interested. Pandoflo is asking US$60,000 (approximately AU$55,766). Head over to the Jet Power website for more details.

Click play on the videos below for a taste of what this beast sounds like. Awesome stuff, well done Pandoflo.