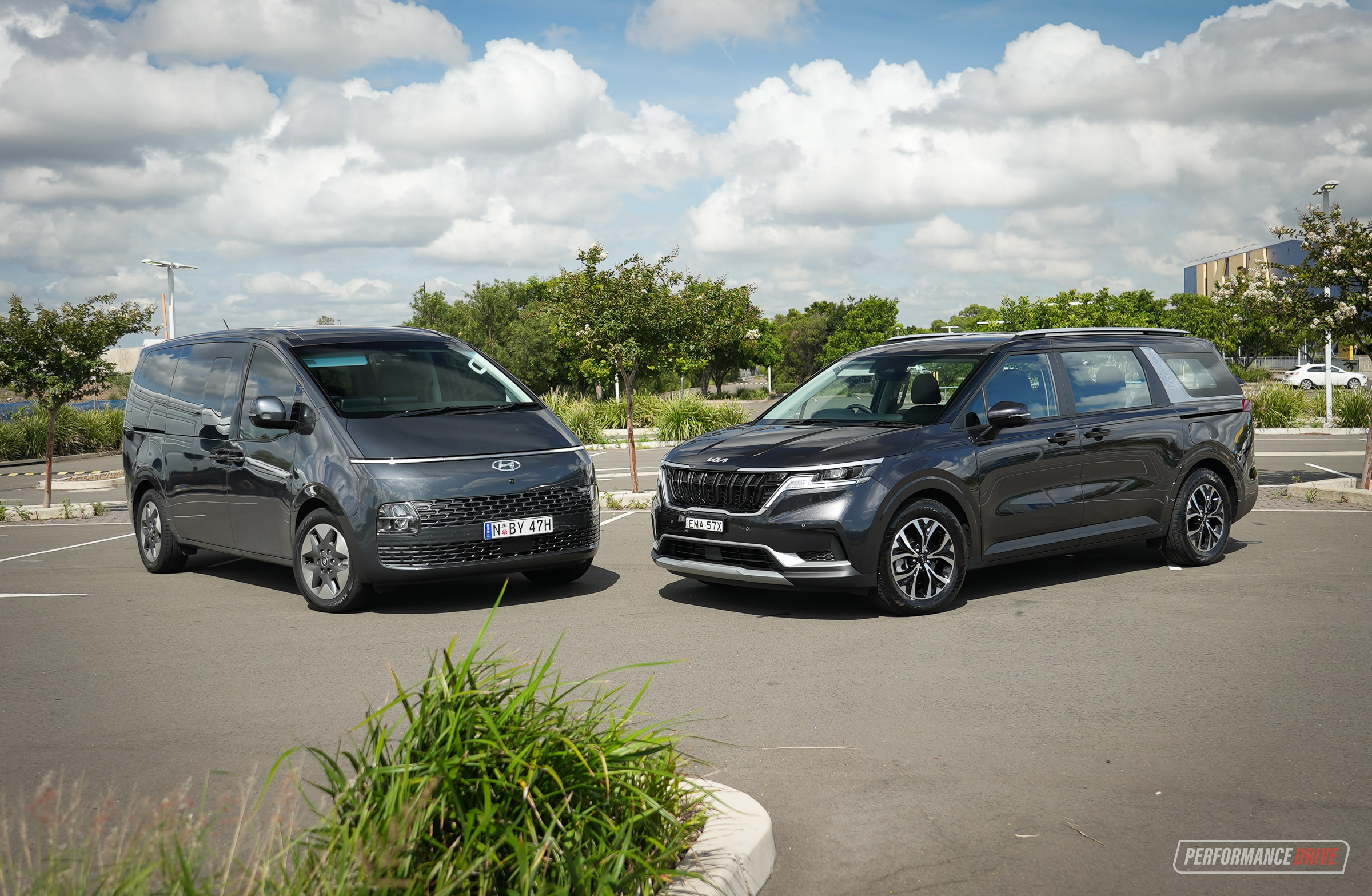 It’s the workhorse of a different kind. The humble people mover, driven by large and busy families with never-ending taxi-driver demands. But in recent years, this market segment in Australia has shrunk thanks to the rise of 7-seater SUVs. So, to try and remain tempting, the models that do remain are moving towards more elegance and luxury. 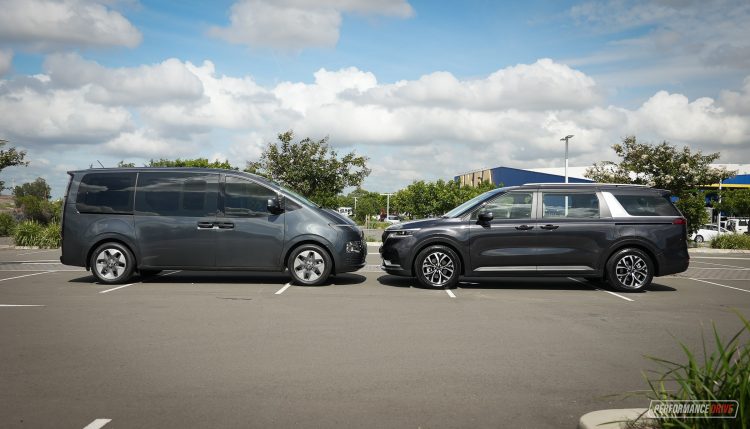 Two popular 8-seat examples are the Hyundai Staria and Kia Carnival. The Hyundai Staria is a new nameplate that replaces the smaller rear-wheel drive iMax. It comes in base, Elite, and Highlander guises. You can choose from a front-wheel drive 3.5-litre petrol V6 that outputs 200kW and 331Nm, or an all-wheel drive 2.2-litre turbo-diesel that produces 130kW and 430Nm.

The fourth-generation Kia Carnival has matured into a much less overweight looking, almost SUV-like people mover. It comes in S, Si, SLi and Platinum grades, all of which can be chosen with the same engines as the Staria, but in front-wheel drive form only. Bizarrely, the Carnival boosts power to 148kW and 440Nm from the diesel engine, and 216kW and 355Nm from the V6 petrol. 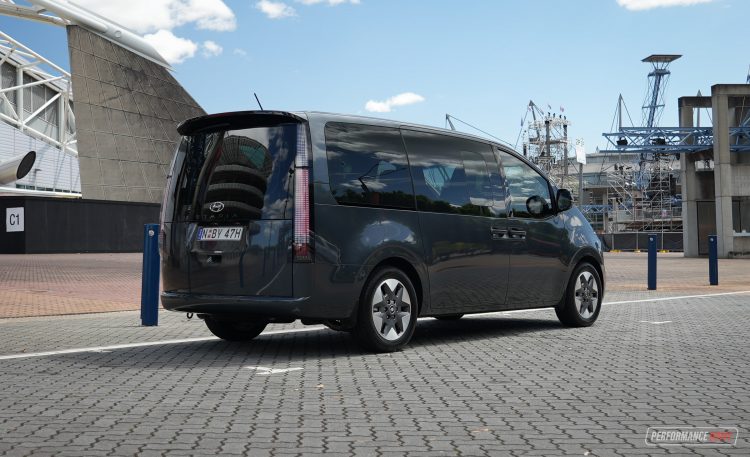 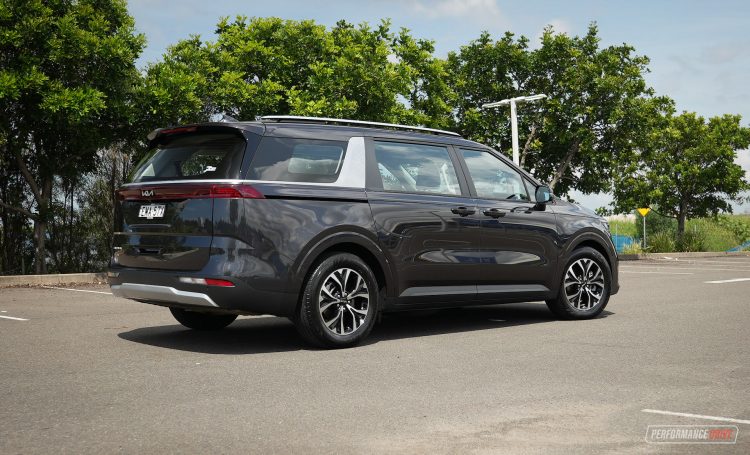 In the way of design, both people movers have bucked the trend in what we think a family van looks like – and both in their unique ways. The Staria is purposely designed to look like something out of space with its smooth contours and flat sides. It almost looks like it’s made up of one piece of metal. There are low-set headlights accented by a futuristic thin horizontal LED strip. Windows all around are panoramic in size, giving it a low-waisted look. The rear also looks space-age with vertical LED combination lights that almost dominate the entire height of the vehicle.

The Carnival takes on a less boxy, lighter look. It has a fully protruding bonnet for starters, and it is a whole 215mm shorter than the Staria. Design elements are taken from Kia’s current design language, but the Staria is in a galaxy of its own. The Carnival’s ‘tiger nose’ front profile looks very similar to its sibling, the Kia Sorento SUV. The rear is where it looks most like a people mover with its tall tailgate and sliding side door runners. But it’s all modern looking, with its long single LED taillight unit and an ‘island roof’ that appears free-standing because the pillars are black or hidden behind glass.

In terms of dimensions, the Hyundai Staria is a larger vehicle in every direction – most significantly in height and wheelbase. The Carnival has a 3090mm span between the wheels, and the Staria enjoys a huge 3273mm. This means that the space inside the Staria is and feels loads bigger. And its height makes it feel more like a van than the Carnival, making it easier to find your seat as you can stand more upright inside. The Staria also offers a high seating position like an SUV. So, you need to climb in and out of it like an SUV. When seated, the seats are much higher than a car, meaning your legs don’t need to straighten out as much.

The Staria’s interior layout also takes advantage of space, offering a mammoth centre console and large pockets. There are four tiers of shelves in the doors, and cup holders everywhere. You get lots of hard plastics for durability, though, areas like the door armrest become uncomfortable on your elbow on longer trips. It’s great there are rear aircon controls. But oddly, they are positioned on the right-hand side ceiling instead of in the middle, making passengers on the left somewhat frustrated. 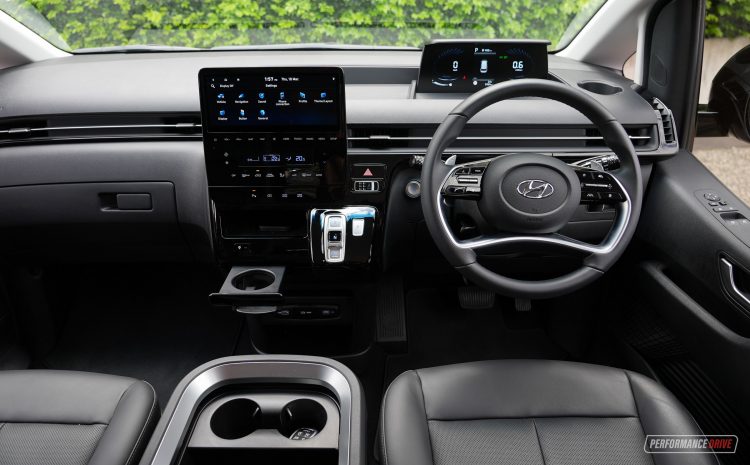 More elegance and less hard plastics are noticed in the Kia Carnival. There are some snakeskin brushed metal designs and glossy black areas with a touch sensitive aircon panel that give it a prestigious edge over the Staria. Though, it is prone to picking up dust and fingerprints easily. The cloth seats also feel hard-wearing and are comfortable for long hauls. 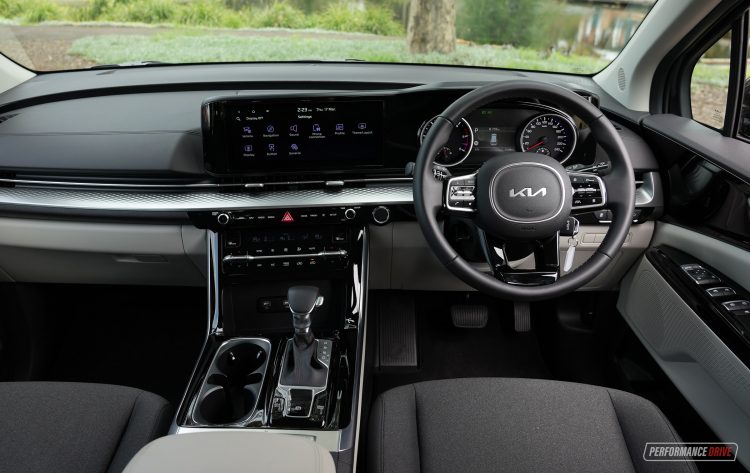 In the rear, the Carnival’s third row has a unique way the seats zigzag into the floor completely flat. The Staria’s seats fold down and protrude. But the Staria obviously has a bigger cargo volume anyway. It offers 831 litres of space when all three rows are upright. The Carnival’s is still an impressive 627 litres. 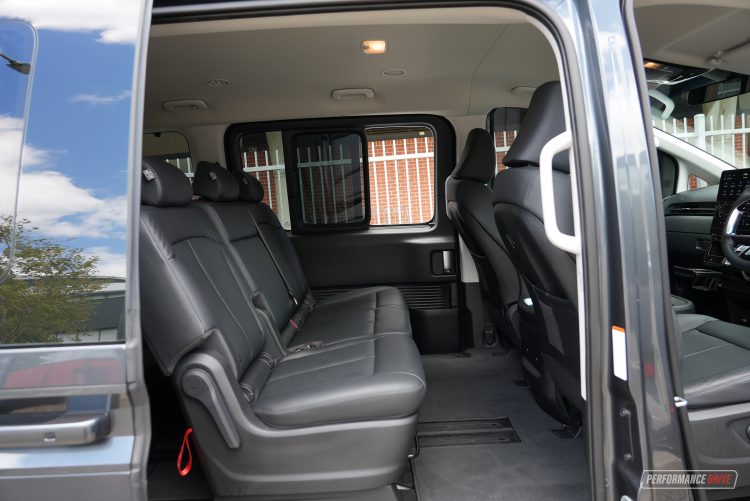 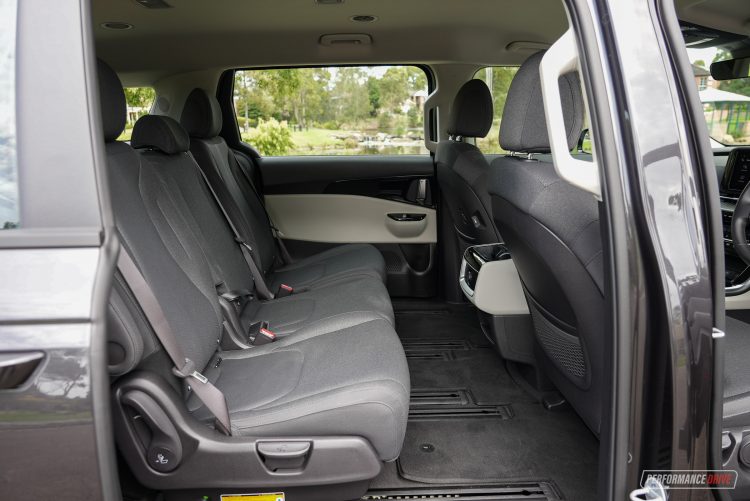 They both also come with wired and wireless Android Auto and Apple CarPlay, sat-nav, ambient interior lighting, many USB ports, and 18-inch alloy wheels, just to name a few.

The Kia goes one better over the Hyundai with a bigger 12.3-inch LCD touch-screen. The Staria’s is 10.25 inches. But the Staria picks up more points by offering electric side doors and tailgate, remote start, auto wipers, an electrically adjustable driver’s seat, a wireless phone charger, front and side cameras (surround-view), and a full-sized spare wheel. When picked with the same engines the Carnival Si and Staria Elite (both second from the base variants) are less than $1000 difference in cost. 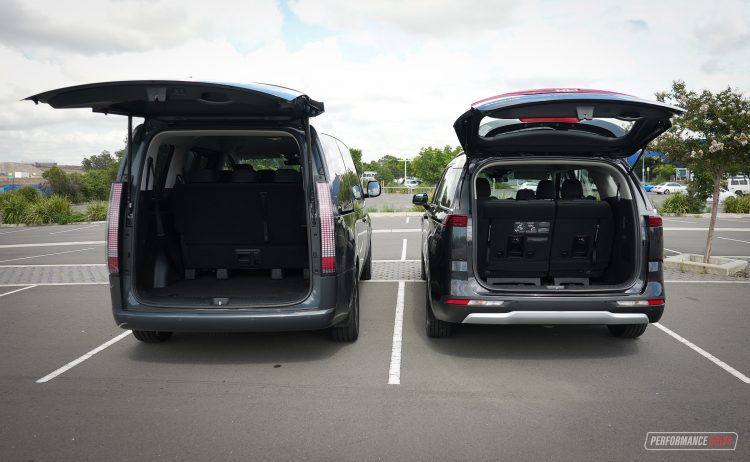 Both people movers weigh over two tonnes empty, so having the grunt to fill them up with your family and luggage is important. The V6 petrol engine in the Staria boasts a healthy 200kW of power. More than enough to get this beast moving. In fact, it takes off from dead stop very quickly – even causing tyre spins easily.

However, 331Nm of torque is not a huge amount to play with, meaning the engine requires higher revs to get the job done compared with the diesel alternative. There is a terrible flat spot in acceleration when already rolling and needing to increase speed in the V6. It seems to get bogged down in a high gear and doesn’t want to get out of it. Until then you apply too much acceleration, and it screams forward and wastes your fuel. We timed a best 0-100km/h sprint in 9.61 seconds. 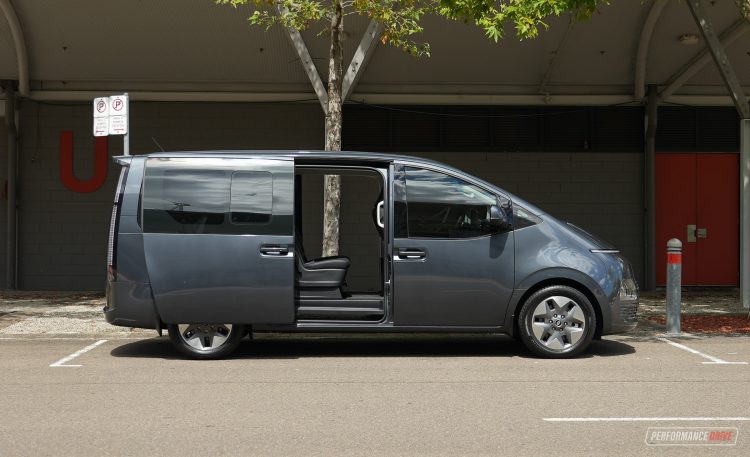 V6 engines are a dying breed – and for good reason. 3.5 litres is a large capacity among today’s standards. That, and the power band being higher in the rev range means the petrol unit is not the smart option. The official average consumption is 10.5L/100km. Our test over 600km involved lots of highway driving, and we managed to score an average of 9.6L/100km. Still too high with the current petrol prices.

The smarter option is the 2.2-litre turbo-diesel four-cylinder, falling under the latest SmartStream family. In the Carnival, that 148kW and 440Nm combo feels surprisingly livelier than the petrol V6. We clocked 0-100km/h in 9.02 seconds. Yep, quicker than the V6 (although in a different vehicle). It surges with urgency and has no sluggish traits or flat spots. It can stick into those higher gears and has the torque to chug along without the need to kick back ratios. Up hills it feels notably stronger too. 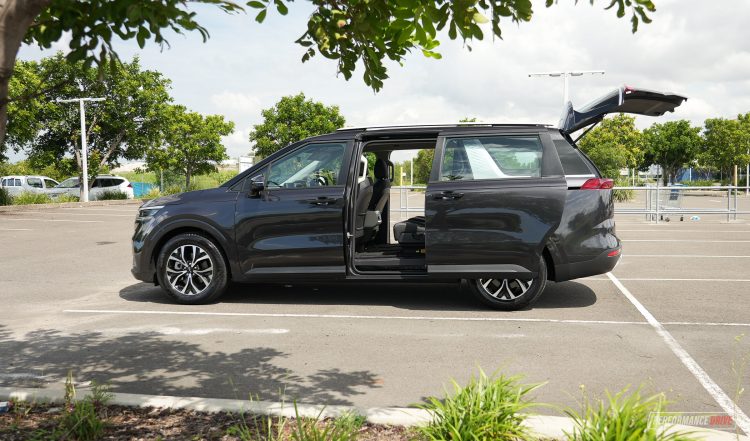 Not to mention, it’s kinder to your wallet. The official average is 6.5L/100km. Marvellous from an eight-seater van that weighs 2082kg. Our average was 7.3L/100km over a distance of 550km. We should note the Staria will have a slightly higher fuel consumption with the diesel option over the Carnival as it uses a four-wheel drive on-demand setup. The Carnival is front-wheel drive only.

Both engines in both vehicles use an eight-speed auto gearbox. In both test cars, we found them to be smooth in operation. Just that issue of holding onto higher gears in the V6 was the only complaint. Though, that would be more to do with programming. 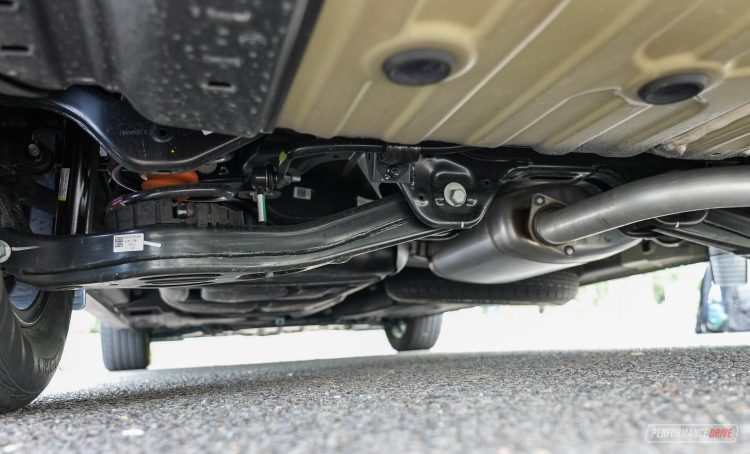 On the bitumen, given its smaller body, the Carnival feels less cumbersome to drive. In terms of dynamics, it almost feels like a car. The Staria being a big boxy mass, you need to go a little slower around corners compared with the Carnival. To help encourage this, the steering requires slightly more rotations than the Carnival, so you don’t get the front outside wheel digging in by steering too quickly.

The Staria offers a slightly more confident feel in the wet with its 4×4 on-demand setup if you opt for the diesel. In both people movers, the suspension is commendable in tolerating bumps and tackling humps for such heavy vehicles. Usually, heaviness results in less suspension travel to absorb those pesky holes. But not here. The suspension does a great job to stop the jolting from entering the cabin. 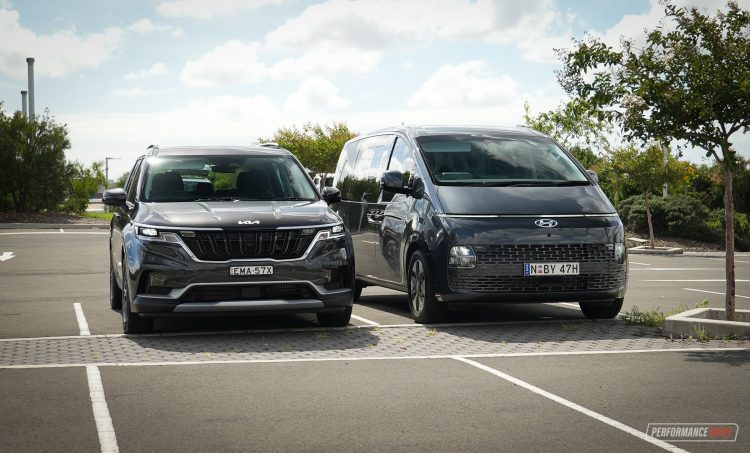 Road noise is more audible in the Staria than the Carnival. Even with that sloping aerodynamic front-end design. The Carnival seems to have lower NVH (noise, vibration, harshness) levels – perhaps due to the Staria’s larger overall cabin volume acting a bit like a speaker box.

If the Staria’s interior size still doesn’t suffice your hauling needs, it boasts an impressive braked towing capacity of 2500kg. That’s 500kg more than the Carnival. 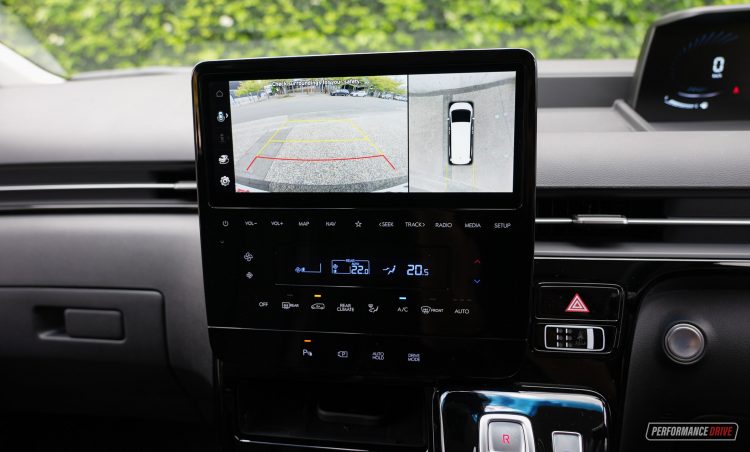 Although the Hyundai Staria and Kia Carnival are both eight-seater people mover siblings from the same head company in South Korea that share the same platforms, they both set out to match differing needs. The Staria is the larger beast. So, if room is your most important need, it will be the pick for you. As a result, the Carnival drives more like a car – more agile and easier to handle. It also offers a more refined interior than the Staria in our opinion, but the Staria is likely withstand a beating due to more hard plastics and the leather-look trim in this variant.

In either vehicle, we think the diesel engine is better suited with its higher torque outputs to carry the extra weight. Even though it demands roughly a $2000 premium, the significantly improved fuel consumption will pay for it in no time.

Where was the Hyundai Staria better?

Where was the Kia Carnival better?