When tuners get hold of a supercar, you just know it’s going to be epic. The new Wheelsandmore McLaren MP4-12C Toxique Evil kit is no different, featuring styling upgrades and power boosted to 666hp (metric 496kW). 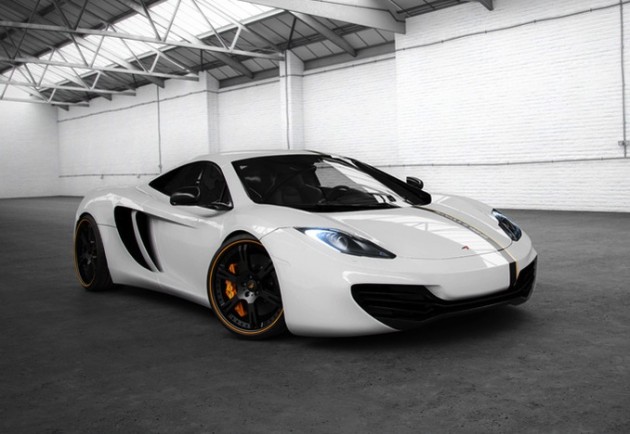 The German tuning company is known for its work on Ferraris and Lamborghinis, and now it’s the McLaren’s turn. Starting with the body, Wheelsandmore fits a set of 20-inch 6Sporz ultralight-forged  alloy wheels with orange pinstripes.

The wheels wear Continental Sport Contact 5P tyres (245 and 325 rear) and sit well in the guards thanks to a sophisticated PPC electronic hydraulic suspension system which lowers the MP4-12C by 25mm. The body is also painted in a white and black colour scheme, with a black and orange racing stripe just off centre.

In the back, the 3.8-litre twin-turbo V8 engine – producing 441kW in standard form – receives a new exhaust system, and a recalibrated ECU taking power to 666hp. So that’s just under 500kW.

A stock MP4-12C is able to crack 10.7 seconds on the quarter mile (video at bottom of this post), we wonder what the Wheelsandmore McLaren MP4-12C Toxique Evil could achieve.

Wheelsandmore says it is working on an intercooler upgrade package which could see power boosted to around 800hp (589kW). Now that would be insane. We’ll keep you updated.