A French tuning company has come up with an interesting DeLaVilla Porsche Cayman R1 Widebody kit. The Porsche Cayman already offers a fairly wide and low stance, but this kit amplifies the trait to even fatter levels. 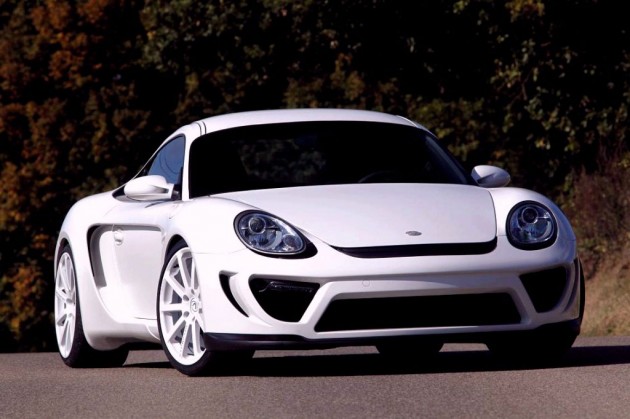 You may not have heard of DeLaVilla, as we haven’t either, but the company has been around since 2007. It mainly specialises in upgrades for Porsche vehicles. The DeLaVilla Porsche Cayman R1 Widebody kit includes vast exterior modifications including the widebody bodykit, as well as some interior revisions and a decent engine tune.

The front and rear guards are widened by 120mm on the front and 180mm at the back. It’s easy to spot the extra width in the doors though, as the guards blend in and provide a racy step down in the centre of the door panel, also allowing for air vents.

Other cosmetic highlights include new front and rear bumper bars, offering a sharp and aggressive look at the front, and a completely altered layout at the rear. The exhaust outlets are also relocated to provide Carrera GT styling.

Behind the cabin sits the Porsche 3.4-litre flat-six engine. DeLaVilla offers three different tunes for the engine, with potential outputs of either 254kW of power, 287kW, or 313kW if you really want to get serious.

DeLaVilla also offers a number of interior upgrades that give occupants a more sporting environment. There’s bucket seats covered in soft yet grippy Alcantara, with a matching steering wheel and gear lever.

It’s a pretty neat kit overall, and just compliments the Cayman’s natural profile. DeLaVilla also does packages for the Cayenne, 911, and Panamera. This Porsche Cayman R1 Widebody kit was first unveiled at the 2011 Lyon International Motor Show in October. What do you think of it?

Head over to the DeLaVilla website for more details on this and other Porsche kits.