Looking like the ultimate bank heist getaway car, the Anderson Germany Audi S8 Superior Grey Edition is as stealth as it comes. It’s based on the previous model S8 with the V10 engine. 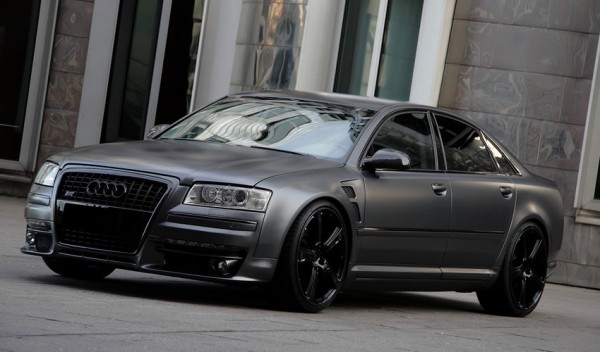 The Audi S8 is becoming an increasingly popular car for tuners and enthusiasts in various markets, as it’s a bit of a second-hand bargain now. It’s also an awesome base as it’s a complete sleeper in production form, featuring a 5.2-litre V10 engine from the Lamborghini Gallardo.

Tuning specialist Anderson Germany has come up with a upgrade package which provides a distinct black theme. Everything from the new front and rear bumper bars, to the bespoke bodykit, even the trimmings and badges, are coated in sinister matt black paint. The body also features aggressive new front guards with heat-extracting vents.

Under the bonnet, the Anderson Germany Audi S8 Superior Grey Edition sports a retuned ECU as well as a new exhaust system. In standard form the Audi S8 V10 produces 331kW of power. With these modifications, power is lifted to 374kW. All that power is sent through Audi’s quattro all-wheel drive system.

You have to admit, it’s a definite mean machine, and no wonder they are becoming more and more popular.