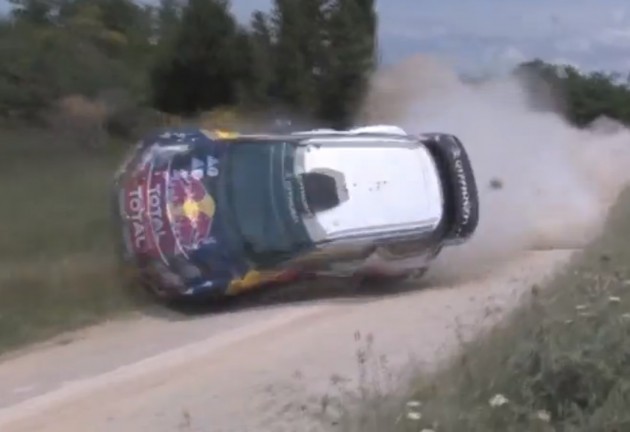 Hirvonen and co-driver Jarmo Lehtinen came away from the incident uninjured, but the same can’t be said of the DS3.

Another lucky person is the one that caught the entire thing on film at close range. As you see in the clip below, the flying Finn clipped an embankment and flipped the Citroen onto it’s roof, shooting down the gully and onto its side.

One can only imagine how these people would have felt when the WRC car, which seemed in control as it danced its way through the Tuscany dirt roads, all of a sudden had its sights on flipping out of control right before their eyes – if they were five or ten metres further down, they most certainly would have been collected.

Hirvoenen is currently second in the championship behind world champion team-mate Sebastien Loeb.

A Citroen spokesperson had this to say after the crash:

“Mikko rolled a lot of times, the accident was high-speed,”

“The most important thing is that Mikko and Jarmo are both OK. They are back at the hotel tonight. The test is finished.”

Hirvonen should be fit and ready for the next round of WRC, Rally New Zealand on 21 June.