Hyundai may well be suffering from a grave identity crisis at the moment. For years the South Korean manufacturer has been the butt of many jokes, and a signifier that things in your life may not have turned out exactly the way you had planned.

In recent years however, Hyundai has been rolling out some very decent cars – the Veloster and more recently the Genesis to name a couple. So, does the latest Sonata, in this case the Premium model, hold up in continuing Hyundai’s winning streak? Or does it drop the ball? 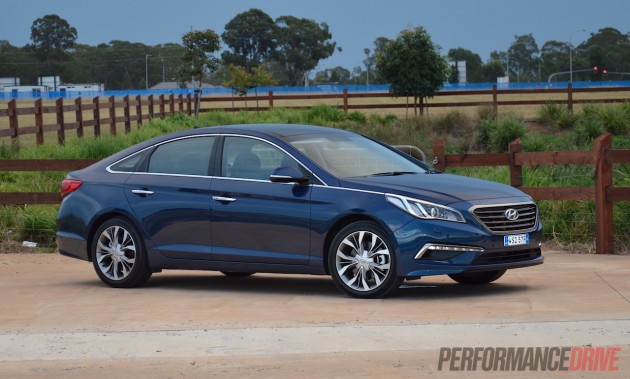 The new Sonata is the replacement to the i45. It comes in three flavours in Australia; the Active, Elite and Premium. The base Active is powered by the existing 2.4-litre GDi petrol engine which produces a fairly unexciting 138kW at 6000rpm, and 241Nm at 4000rpm. The powertrain in the Elite and Premium models is considerably more powerful at 180kW (at 6000rpm), with 350Nm presented between 1400 and 4000rpm. This comes from a new (for Australia) turbocharged 2.0-litre ‘Theta II’ engine. With 180kW on tap, this is one of the most powerful propositions in the class.

Prices kick off at a reasonable $29,990 for the Active, but head north to $41,990 for the top Premium as tested. At this price point it goes up against some very reputable and well-established rivals like the top-line Toyota Camry Hybrid HL (from $41,490), and the new Ford Mondeo Titanium (from $44,290). 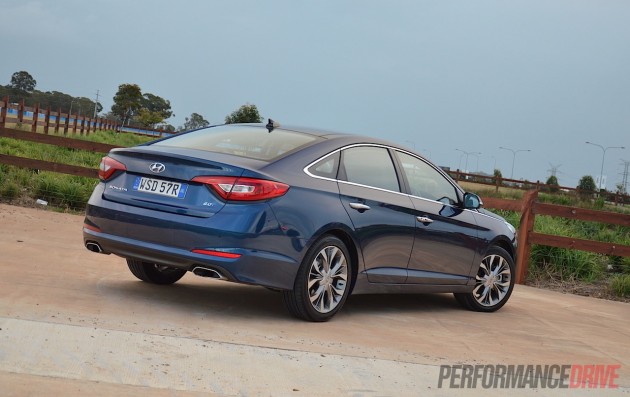 First up, the latest Sonata range features Hyundai’s ‘Fluidic Sculpure 2.0’ design language, which is a good thing, a really good thing. The Sonata’s side profile remains pretty conservative, with a few chrome lashings bordering the window sills and door handles, and the rear is a very minimal approach. The front may be one of Hyundai’s most desirable profiles to date though. Lines from the bonnet come down to meet the stylish front grille. Below there is an aggressive front splitter which meets an angular front air intake, garnished with LED lights. It’s all reminiscent of the new Genesis styling.

Inside, the Sonata cabin is a far cry from previous Hyundai models, with design focused on making a spacious and ergonomic environment that almost fools you into thinking you’re driving something much more expensive. Some of the materials used are cheap but fortunately they have been put together and implemented into a solid package, with darker tones throughout the cabin to give it a higher quality appearance and feel.

The driving position is very accessible, with an adjustable power seat and a tilt/telescopic moveable steering column. This comes in handy as the dashboard rises quite high and doesn’t give much indication as to where the front of the car is. The leather appointed seats are comfortable, with heating and – more importantly in Australian climate – ventilating functions. There are loads of features in the Premium model too, like a panoramic glass roof, leather, and a power passenger seat.

Both the Elite and Premium models receive Hyundai’s 8.0-inch touch-screen navigation and infotainment system with Bluetooth connectivity. While being a functional and easy-to-use system, it does appear quite basic and lacking finer dynamics compared with what’s on offer in the rest of the market. Also, don’t even think about opening the sunroof if you intend to use the navigation system as the glare and reflections render it nothing more than a hazard; the sun, on occasion, bounces off the screen and deep into your retinas.

The infotainment system on our press car started misbehaving after the third day of testing and got itself into a constant cycle of resetting itself, which couldn’t be stopped. Editor-in-chief Brett Davis mentioned a similar problem when he tested the new Genesis earlier this year. We spoke to a Hyundai technician about it. He said it just needed a system reset.

One of the biggest feathers in the Sonata’s hat is the practicality on offer. There is an insane amount of space inside the cabin, and one of the largest boots on offer in the category. With 510 liters of storage space and a full-size spare tyre underneath, the Sonata will eat up a family’s luggage for a weekend away with ease. Passengers in the back won’t be complaining about legroom either – some of the taller members of the PerformanceDrive team still had several inches of legroom with the driver’s seat in the fully back position. With the Sonata being front-wheel drive, there is no obstruction from a drive shaft tunnel running through the cabin.

Hyundai’s first batch of Sonatas will miss out on some advanced safety equipment, with collision-avoidance technology coming to the range in the third quarter of 2015. Having said that, there is still all of the standard safety features you need like ABS, EBD, VSM, TCS, a rear-view camera and both front and rear parking sensors, as well as six airbags. The Premium also gets sun shades for the rear side windows for some protection against the sun. 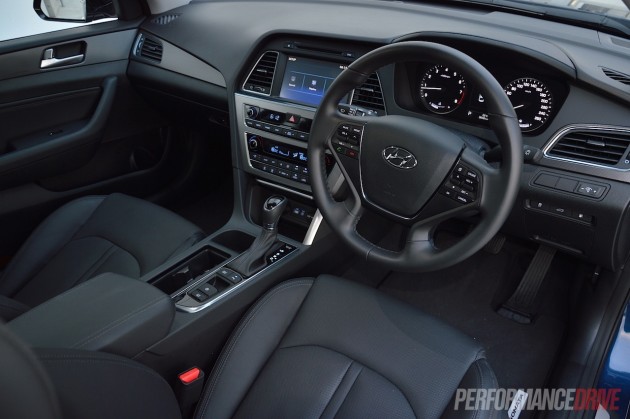 Doing the everyday urban grind in the Sonata is a very pleasant, easy-going affair. In comfort and eco driving modes (selectable on the console) there is a very smooth and gradual delivery of power, with gentle shifts from the six-speed auto. The new 2.0-litre accelerates effortlessly as well, thanks to 350Nm being available from just 1400rpm, heightening its luxury-focused personality.

If you need performance, the 2.0-litre offers that as well. With only minor turbo-lag low down in the rev range, and a very compliant six-speed automatic transmission, you can expect to see the 0-100km/h dash over and done with in 7.8 seconds. You do have to contend with a small amount of torque-steer under hard acceleration, as can be expected from 180kW coming through only the front wheels. This can be easily managed and to the everyday driver it’s probably unnoticeable.

Ride quality is on par with the competition, matching the Toyota Camry and Mazda6 around the city, while retaining some more dynamic qualities at speed. It’s not exactly at Ford Mondeo-standard for suspension and chassis performance, but it gets close. At speed there is a moderate amount of road noise and tyre roar entering the cabin, but this problem only really arises on rough and coarse surfaces.

Hyundai has spent some extra time calibrating the chassis and suspension for the Australian market, with bespoke suspension adjustments as well as a software tweak to the mapping of the electric steering. This has paid in dividends when pushing the Sonata with a semi-aggressive driving attitude. In the curves it has an impressive hold on the ground even when encountering bumps.

Normally the thought of taking a four-door Hyundai sedan through the curves and challenges of a real driver’s road would put petrolheads to sleep, but the Sonata did much to impress us when the going gets curvy. There is a load of mid-range torque to get you to the next corner, and an impressive amount of grip from the front axle to encourage sportier driving. It does show its weight of 1645kg, which admittedly isn’t too heavy for a family sedan, translating to some degree of body roll and understeer when pushing the car to its limits. The sport driving mode doesn’t do any significant suspension or software changes but it does add some weight to the steering for a sturdier feel.

The 2.0-litre turbo is a great powertrain and puts the Sonata on the higher echelon of the power figures in comparison to the competition. This however hurts the fuel consumption and is one of the weaker points of the car in our opinion. The ADR test claims a 9.2L/100km combined cycle figure, which is significantly thirstier than the Mazda6 Atenza 2.5 for example (6.6L/100km). In addition to this, the official figure is pretty difficult to attain, especially if your daily commute involves a lot of stop-start driving. 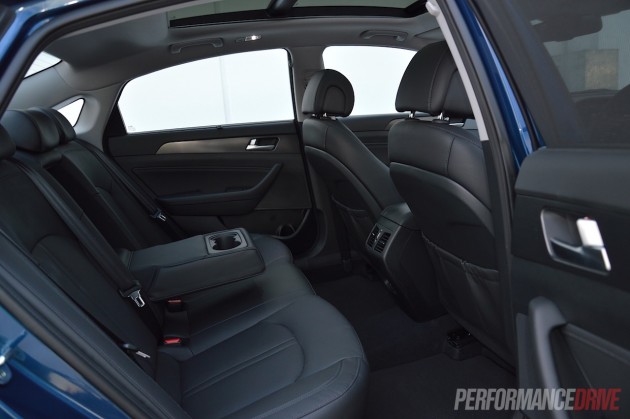 With prices of this Premium model sitting above $40,000, an interesting point raises its head. To the average punter, putting the words Hyundai and $40,000 in the same sentence causes some bickering One of the biggest challenges Hyundai faces in becoming a major player in certain market segments is convincing people that the stereotypes attached to the brand are now nothing but a distant memory.

This car has undeniably been designed with families and company-car-buyers in mind, with its range of luxuries, conveniences and practicalities. And with 180kW, Hyundai may be giving a silent nod to drivers who demand a little bit of excitement in this otherwise boring segment. You won’t be fooled into thinking you’re in a serious performance car but there are definitely two contrastive personalities here. It’s a good blend. 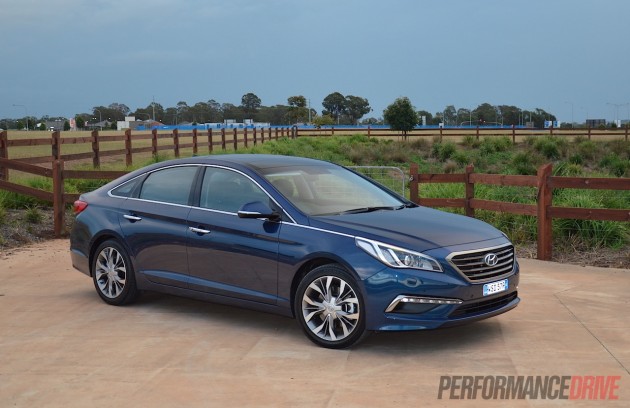