Subaru has decided to pull the wraps off the new 2011 Subaru Impreza WRX STI S206 special JDM-only model ahead of its official 2011 Tokyo Motor Show unveiling. 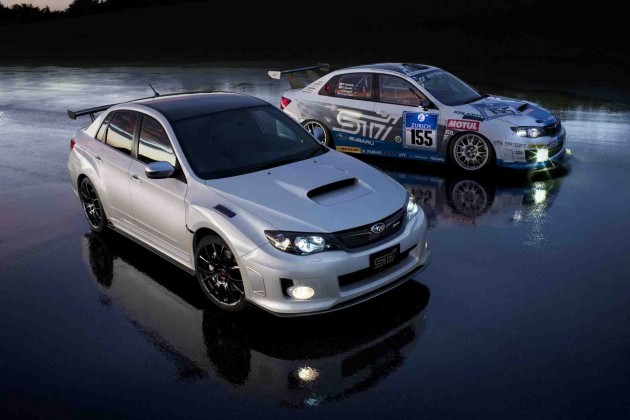 It’s such a shame Australia misses out on rip-snorting special editions like this. In the Japanese Domestic Market, there are various editions of both the Subaru Impreza WRX STI and Mitsubishi Lancer Evolution, from stripped out ready to race models to higher powered versions with more features.

The new 2011 Subaru Impreza WRX STI S206 comes with a vast array of performance revisions over the already-anabolic WRX STI. There’s more power under the bonnet, more aero on the outside, a performance-oriented interior, and some component changes underneath to ensure optimum traction and handling.

Under the bonnet, there’s an STI-tuned 2.0-litre turbocharged flat-four engine producing 236kW (officially 320PS) of power and 431Nm of torque. Subaru says the engine’s ECU has been re-calibrated to offer improved response, while a twin-scoll turbocharger is also revised as is the exhaust system, all providing the extra oomph.

From the outside it’s easy to spot that this is a unique model. There’s a new bodykit, including revised front and rear bumper bars, and a more aggressive front spoiler. When optioned with the ‘NBR Challenge’ pack, the S206 gets a carbon fibre roof and a big carbon fibre rear wing commemorating Subaru’s class win at the Nurburgring 24 Hours race.

Unfortunately, there are no plans for Subaru Australia to bring in the new version. What do you think? Would you like it if Australia imported hard-edged editions like this?

Check below for the full upgrade details.