BMW has sent out another preview of its incoming BMW i4 fully electric mid-size four-door coupe, giving us a taste of the side profile ahead of its Geneva motor show debut next month. 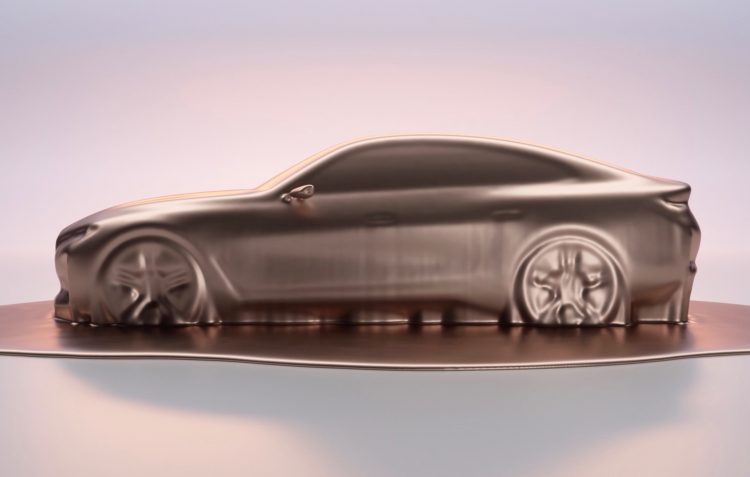 The i4 will be a fully electric model sharing some similarities with the 4 Series Gran Coupe, in terms of size and character. It will showcase a fresh design though, and is expected to feature plenty of distinct ‘i car’ themes.

In the teaser we’re shown a somewhat artistic outline of the i4’s body. It’s like liquid metal is poured over the body, revealing the basic side profile. It does look pretty familiar BMW stuff, with peeled-back headlights and a pronounced front grille, with a defined rear haunch and integrated rear spoiler.

Plenty of specs have already been confirmed for the i4. Power will be supplied by a new, fifth-generation eDrive system incorporating an 80kWh battery. This will supply power to an electric motor, likely for the rear axle only, with output to be around the 390kW mark.

Across the 0-100km/h sprint BMW suggests a time of around 4.0 seconds. This will make it quicker than any current 4 Series model, even equalling the current M4. With a full charge, BMW says the range will be around the 600km mark.

We’re expected all of BMW’s latest in-car tech for passengers, such as a wide-screen media interface running the 7.0 operating system. However, the centre console is likely to be very unique, with an a typically unusual gear selector system as per most electric vehicles.

While it was previously reported that the big debut would be Geneva show, BMW has now officially confirmed that is exactly the case. It will be a concept version only and not the production model, but much inspiration is set to be drawn from it for the showroom version, due next year. The show starts on March 3.