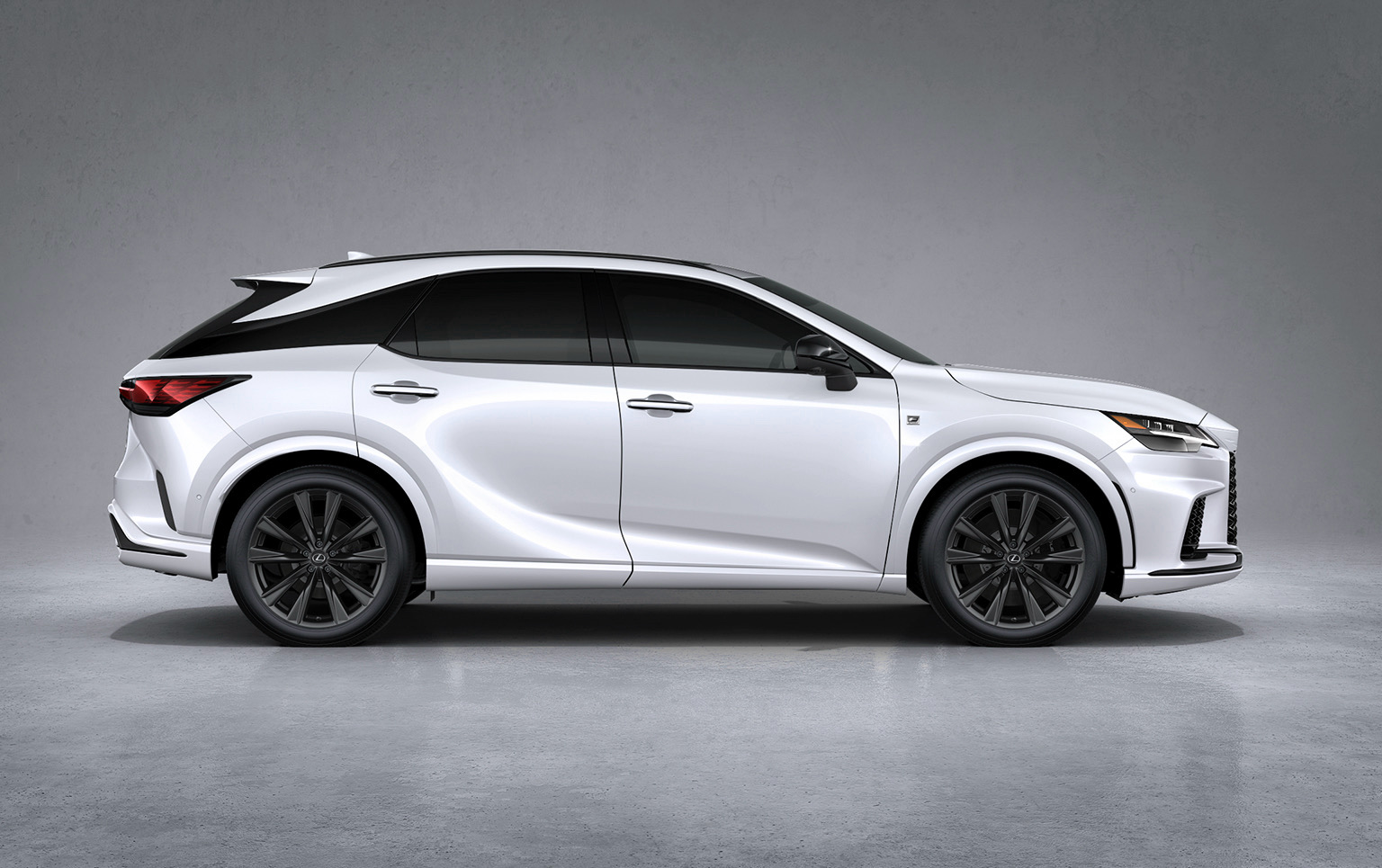 The all-new, fifth-generation Lexus RX large SUV has been unveiled, showcasing a freshened up design, new powertrain options including the company’s 2.4 turbo, and new levels of luxury for the nameplate. 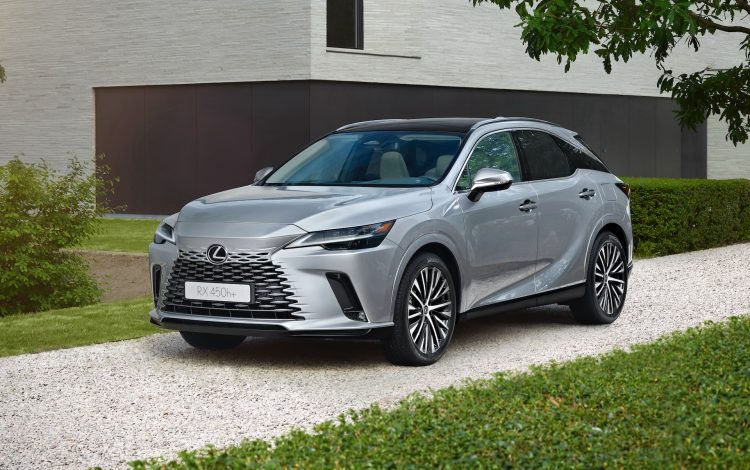 Firstly, the design takes a similar form as other recent Lexus SUVs, such as the new NX. The front end is sleeker and houses slimmer headlights, with a bulging bonnet edge in between, while the cabin glasshouse appears to be lower in profile. At the back is the trending full-width taillight treatment, with new side garnishes and a pronounced diffuser area.

Underpinned by the TNGA-K platform, Lexus says the overall width of new RX is 25mm wider, with a 15mm wider track at the front and 45mm wider track at the rear, while the overall height has been reduced by 10mm. Length remains unchanged at 4890mm. With these changes the company says the centre of gravity has been brought down by 15mm, aiding handling and driving dynamics.

So, what about the powertrains? Well, the company’s new 2.4-litre turbo-petrol four-cylinder comes in, as expected. It powers the entry variant called the RX 350 – essentially replacing the RX 300 2.0L turbo and RX 350 V6 – and will be available in front- and all-wheel drive configurations (specific market availability is yet to be confirmed). 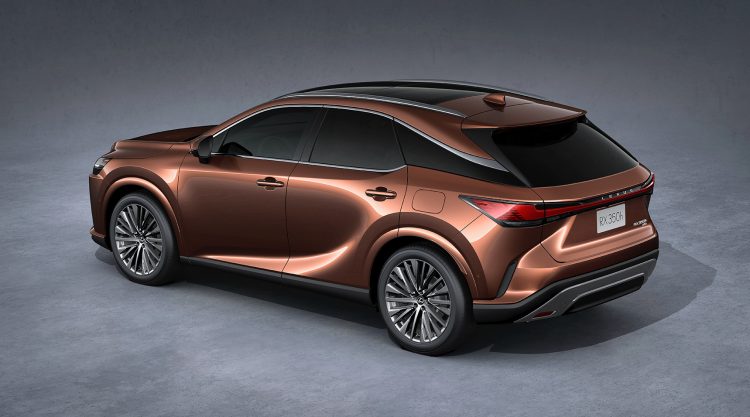 Moving up, the new RX 350h pairs a 2.5-litre petrol with an electric motor hybrid system, in either front- or all-wheel drive configuration. The RX 450h+ incorporates a similar layout but with plug-in hybrid functionality.

However, badged as the RX 500h, the flagship variant pairs the 2.4 turbo with an electric hybrid assist system for the first time. There’s also a special new RX 500h ‘F Sport Performance’ variant.

Full specifications are yet to be outlined, but Lexus has confirmed the RX 500h F Sport Performance develops a combined output of 270kW and 550Nm, and says it can cover 0-60mph (97km/h) in 5.9 seconds. Needless to say, it comes in as the quickest RX ever. The F Sport Performance variant comes with Dynamic Rear Steering, adaptive dampers (AVS), six-piston front brakes, and a bespoke exterior package with 21-inch alloy wheels. 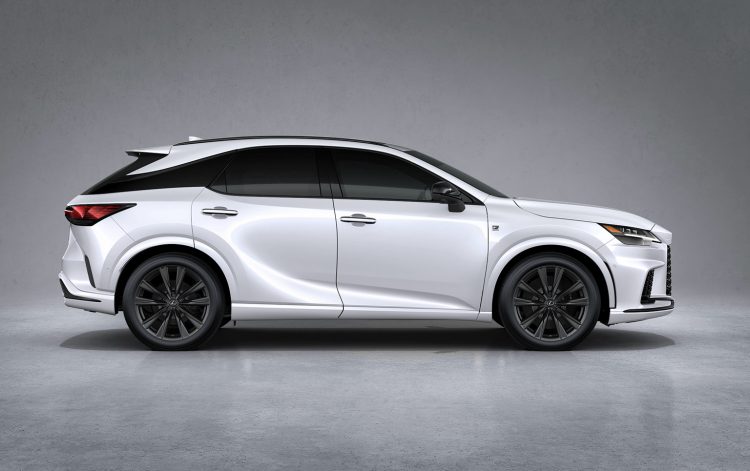 Specifications on the 450h+ plug-in hybrid are yet to be revealed, but we expect a similar package as seen in the latest NX 450h+ that develops 227kW. This is all according to the US specifications. Australian details could be slightly different. 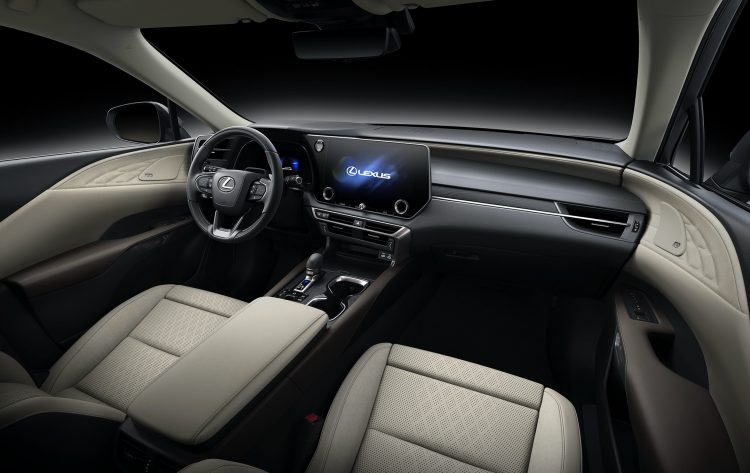 Inside, the new RX showcases either a 9.8-inch touch-screen infotainment system or a 14-inch unit, while the overall decor follows the ‘Tazuna’ concept which is described as a human-centred design philosophy. The dash wraps around the passengers elegantly, while the long centre console houses a convenient arrangement of storage options and driver controls.

Lexus Australia has confirmed the new model will go on sale locally, with full specs and pricing to be announced “later this year”.