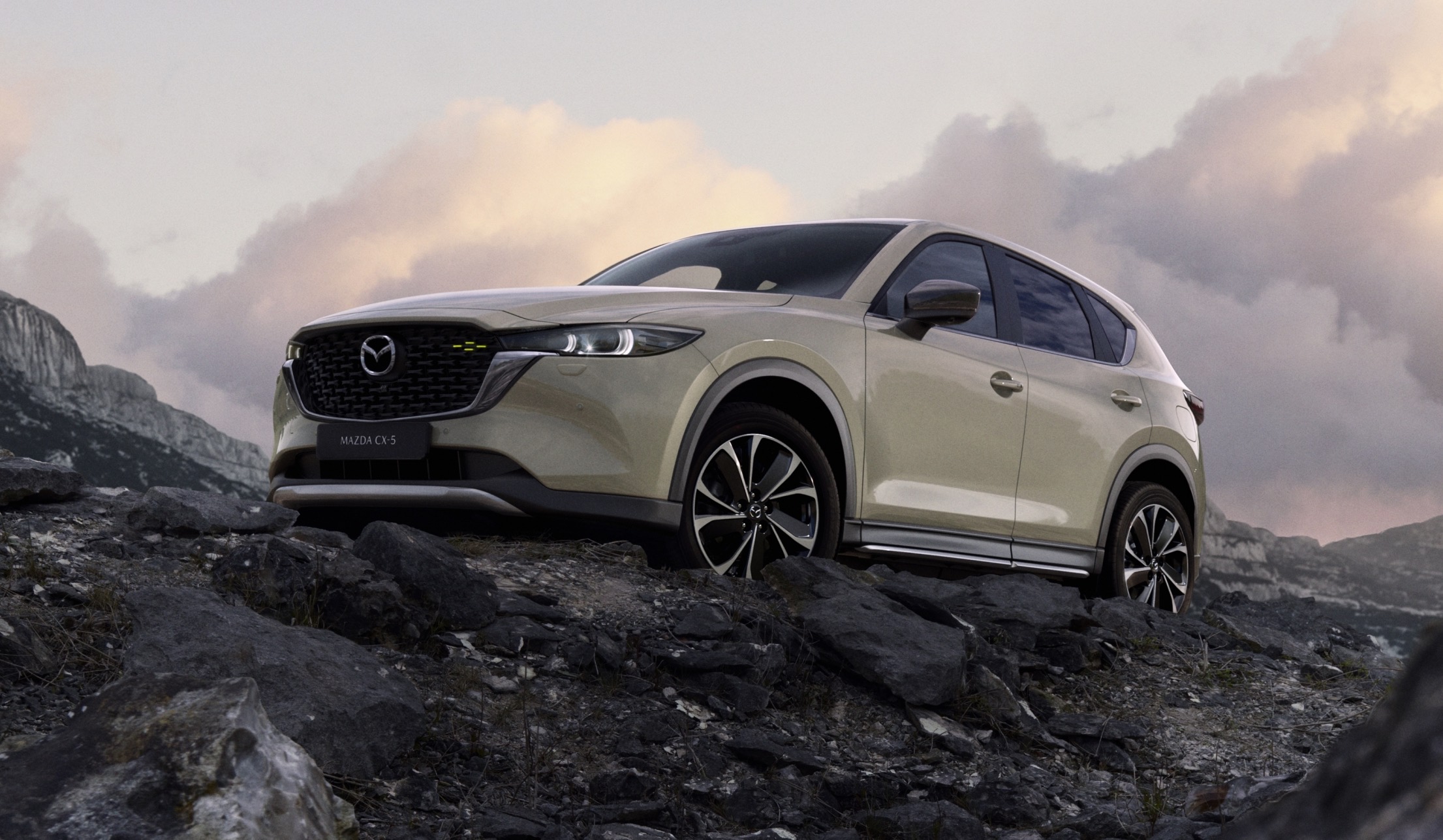 The 2022 Mazda CX-5 has been unveiled globally, bringing in a range of feature and design updates that are expected for Australia soon, along with refinement improvements and more advanced driving dynamics. 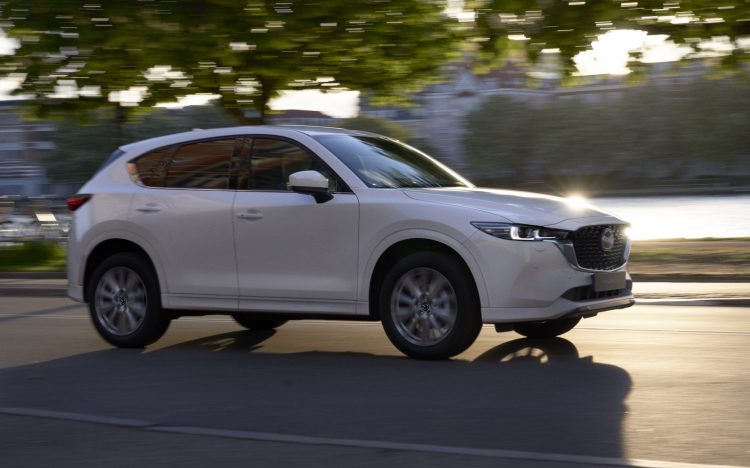 Kicking off with the design, the latest CX-5 has always been one of the suavest SUV packages in the non-premium space. Mazda obviously doesn’t want to try and fix something that’s not broken, so to speak, as the 2022 model sports a very familiar look.

Take a closer inspection though and you’ll find a new front grille area which shows off a more three-dimensional look, and there’s some new headlights and taillights embedded in. Mazda is also introducing a fresh “Zircon Sand” paint colour option.

Different model grades introduce other treatments as well, including rugged lower sections for the restyled front and rear bumper bars, new door trimmings, black side mirrors, and lime green highlights, depending on the grade. New-look 17-inch and 19-inch alloy wheels complete the look. 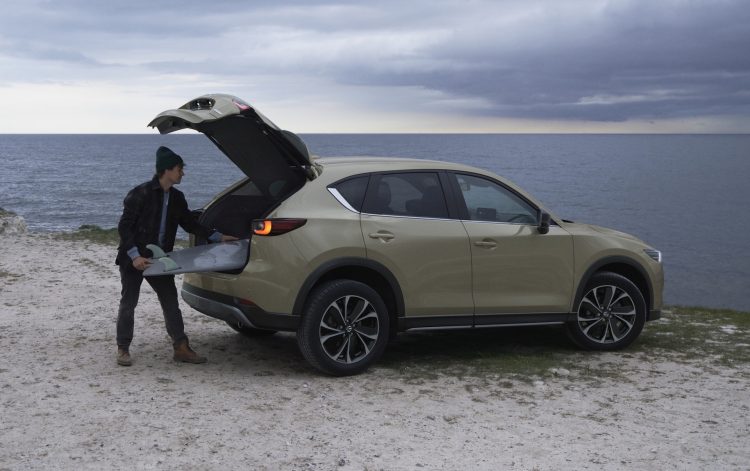 Inside, Mazda is introducing a wireless phone charging tray for the centre console, along with a reversible cargo floor section with a water-resistant backing, while the boot sill is now level with the boot floor for easier loading.

In terms of driving dynamics, the new model debuts something called “Mazda Intelligent Drive” selector (Mi-Drive). This gives the driver a range of driving modes, including an Off-road mode, where available. Mazda also says the 2022 CX-5 is underpinned by the latest ‘Skyactiv-Vehicle Architecture’, bringing in revised suspension for improved ride comfort, and reduced noise and vibration levels. 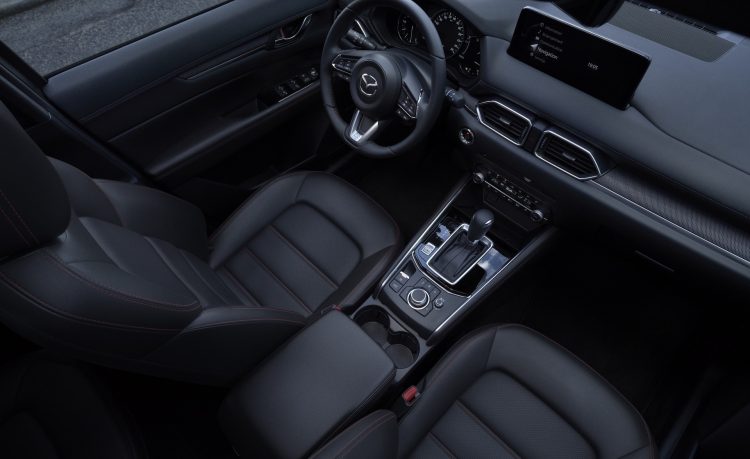 Under the bonnet, the same lineup of four-cylinder units continue. However, Mazda has made some revisions to reduce emissions on both the diesel and petrol units, while also improving driving pleasure and stability. For example, it has made some adjustments to the throttle pedal feel, adding a firmer spring tension. The six-speed auto is also optimised, promising faster shifts, quicker response, and deeper pedal movement.

Australian specs are yet to be confirmed, but in Europe, the range opens with a 2.0-litre petrol four-cylinder developing 121kW and 213Nm (up from 115kW and 200Nm, Australian outgoing spec). 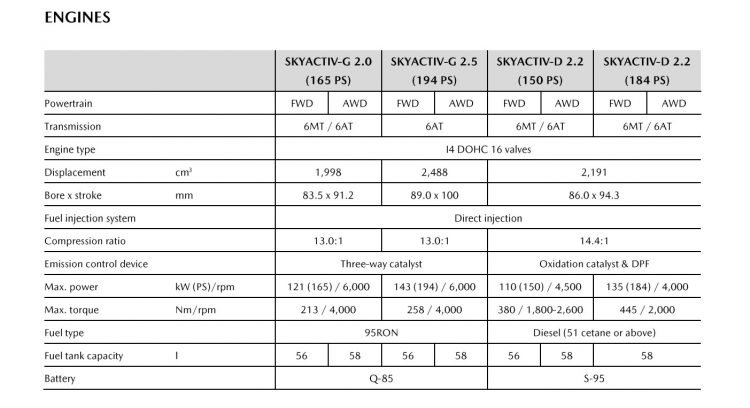 At the top the 2.2-litre twin-turbo diesel now generates 135kW and 445Nm (down from 140kW/450Nm in Australia). Again, these outputs are from the Euro specs and may differ to Australian numbers.

Local details are expected to be announced very soon, however, the new model is scheduled to go on sale overseas “early” next year.

UPDATE: Mazda Australia has confirmed the new model will go on sale locally next year, with finer details and variant levels to be confirmed during the first half of 2022. Mazda Australia managing director, Vinesh Bhindi, said:

“This latest update meets customer demand for self-expression and personalisation, addressing their style and lifestyle more acutely than ever before. It also strengthens Mazda CX-5’s position as an important mainstay in our stable, as we anticipate the arrival of new generation, large platform SUVs arriving in 2022.”