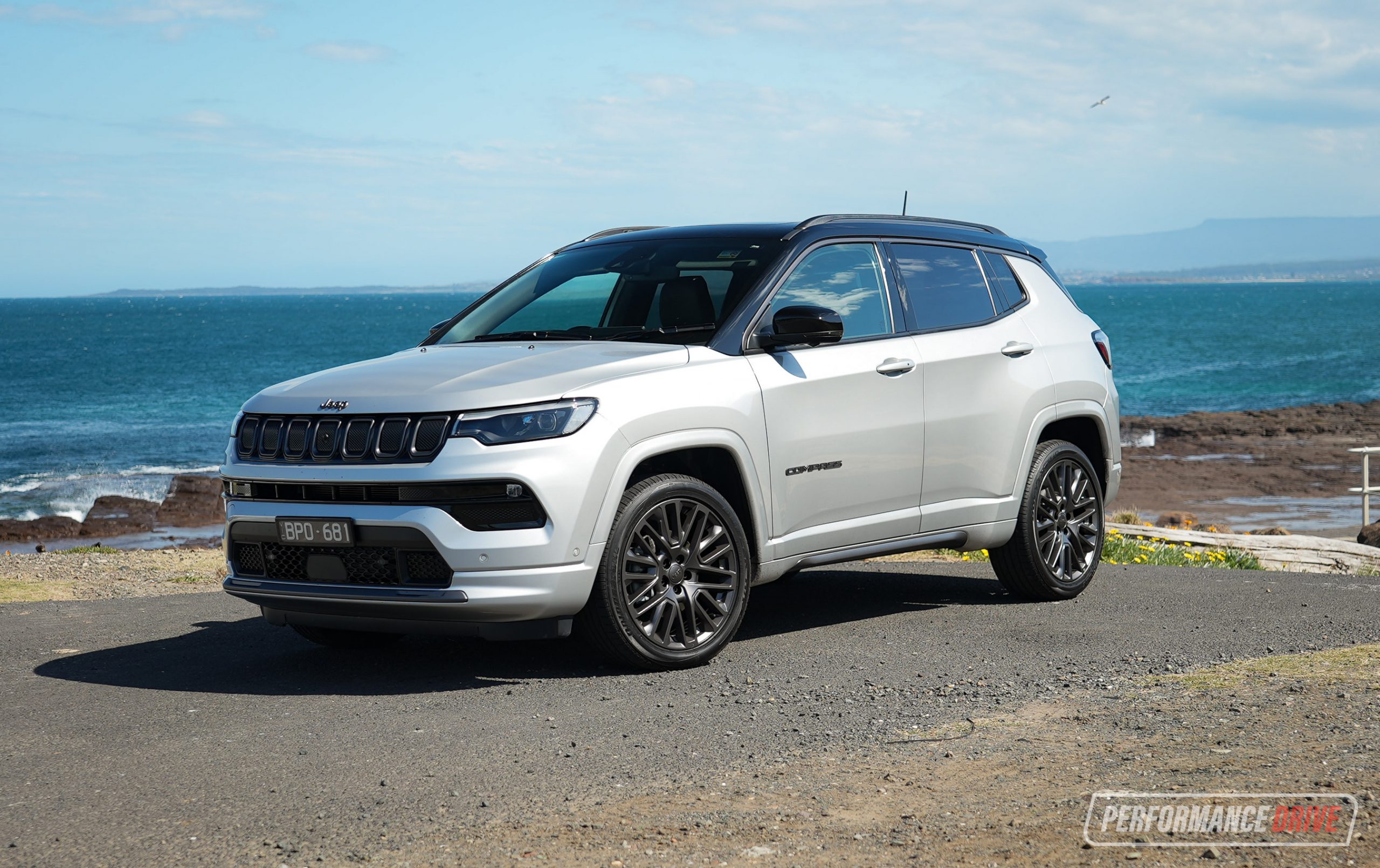 The 2022 Jeep Compass seems to be in a class of one when it comes to the design brief. What we mean by that is, there are very few small SUVs that attempt to provide the user-friendly creature comforts of an urban runaround with real off-road potential. 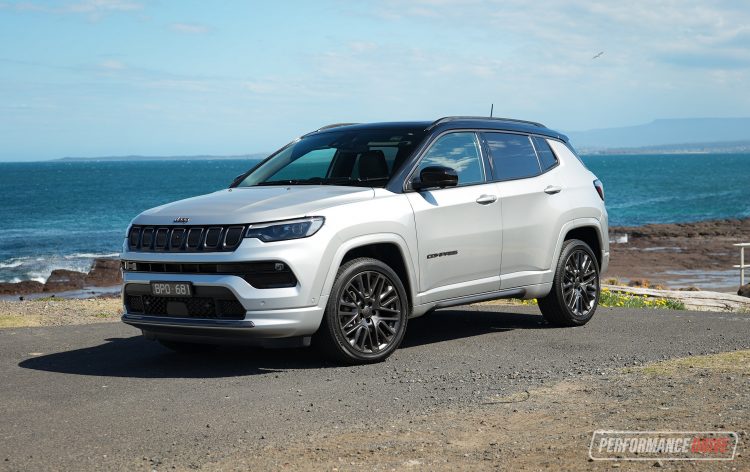 We’re talking about Jeep, though, the brand famous for its rugged off-road creations, and it wants a slice of the lucrative SUV segment pie, too. As a result, it has entered the ring with the Compass, which is billed as a city runaround that isn’t afraid to get its feet dirty on the weekend.

This adaptability doesn’t come cheap, though, with prices of the S-Limited variant starting from $48,350, which comes dangerously close to the bigger Cherokee. This begs the question of just how competent is the Compass, and how much equipment are you getting? 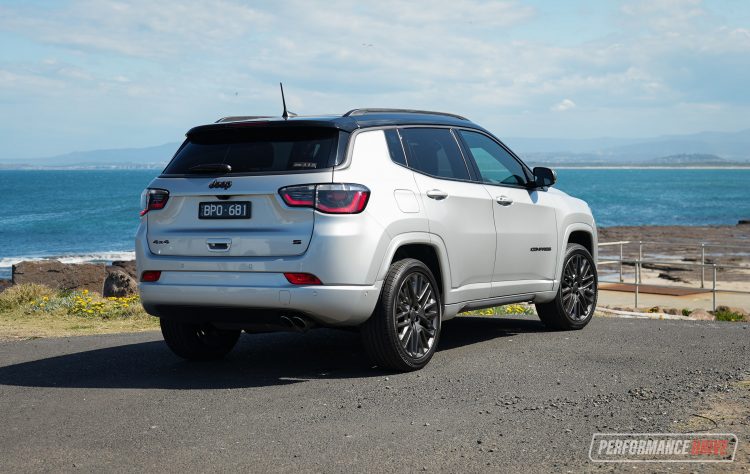 As you approach the Compass, it’s clear to see that Jeep wanted to make it look more purposeful than an urban runaround. The end result is an SUV that offers far more road presence than the majority of its rivals, and lovers of Jeep’s design language and styling cues will be thrilled with how it looks in the metal.

The 19-inch ‘hyper black’ alloy wheels fill the arches nicely and look quite attractive, while the iconic front grille has surprisingly been filled with plastic surrounds for a flat finish, perhaps for the sake of optimising fuel efficiency; which, as you’ll soon discover, the Compass could use. As per usual, beauty is in the eye of the beholder so we’ll let you be the judge of the overall styling. 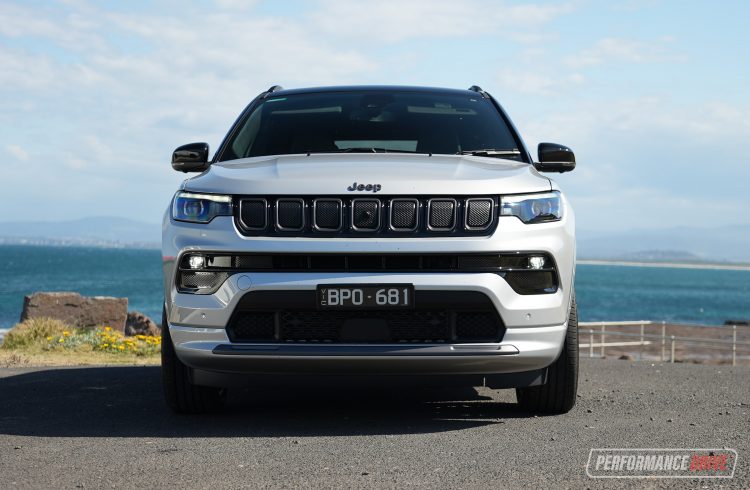 Instead, we’ll cover what Jeep has done to improve on its replacement, which lies predominantly inside the cabin. It has received a major overhaul. The end result is an all-black design affair with leather sweeping its way across the dash, paired with some silver contrasts, and a gloss finish applied to the transmission tunnel.

The packaging is simple and straightforward, and matches what you’d expect to find in a vehicle with this price tag, albeit with some cheap but forgivable materials. If you go out of your way to find them, there are some noticeable dips in build quality around the cabin, but typically the frequently-touched surfaces and switchgear are fine. 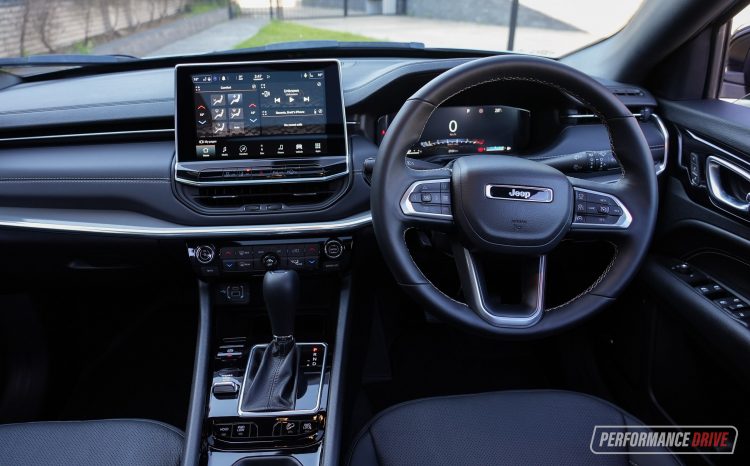 Jeep is well-aware that the majority of Compass buyers will be on the younger side, and as a result, the company has really fine-tuned the infotainment system. It is one of the leading multimedia touch-screens in the segment, in our opinion.

The S-Limited features a 12.3-inch digital gauge cluster, alongside the standard 10.1-inch touch-screen which proves one of the highlights of the Compass. The screen offers a bright and high-resolution display with a simple user interface that is extremely responsive to inputs. It feels as fast and responsive as a smartphone, which in a number of its rivals can be something difficult to obtain. 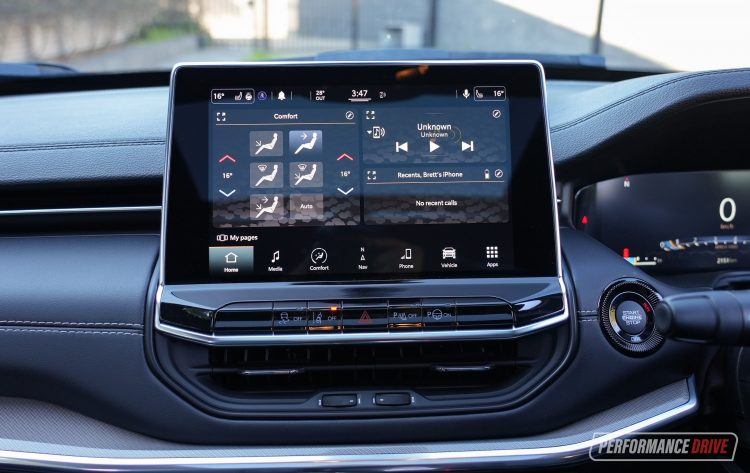 Interior space and comfort in the front will prove fine for the majority of drivers, but you might feel like you’re inside an all-black cocoon if you’re on the taller side. There’s a comfortable set of leather seats and enough space to stretch out on long journeys, so long as there’s no one seated behind you. 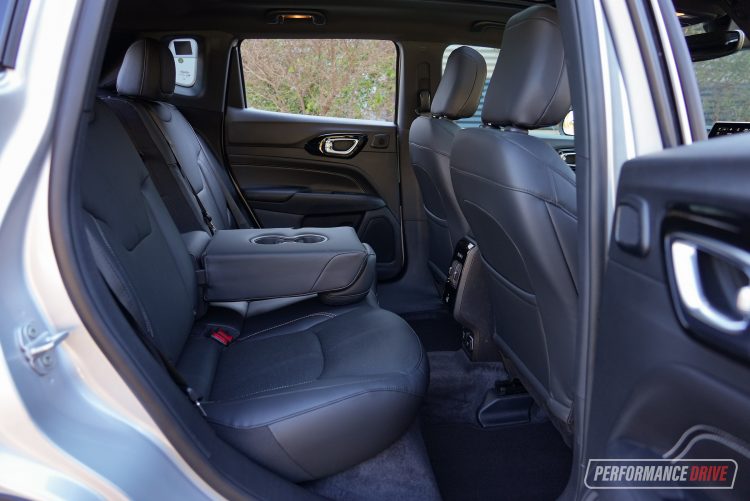 Practical elements up front include the usual set of door bins either side, a large passenger glove box, a pair of cup holders with a gap perfectly suited for standing a smartphone, a small amount storage in the folding armrest, as well as a small tray in front of the gear lever that doubles as a wireless smartphone charger.

Moving to the rear, the Compass offers more space and comfort than you’ll find in a typical small SUV, which makes it more adaptable for growing families. In our typical driving position, knee room seemed well ahead of most rivals in this segment. However, don’t expect as much room as a medium or larger SUV. 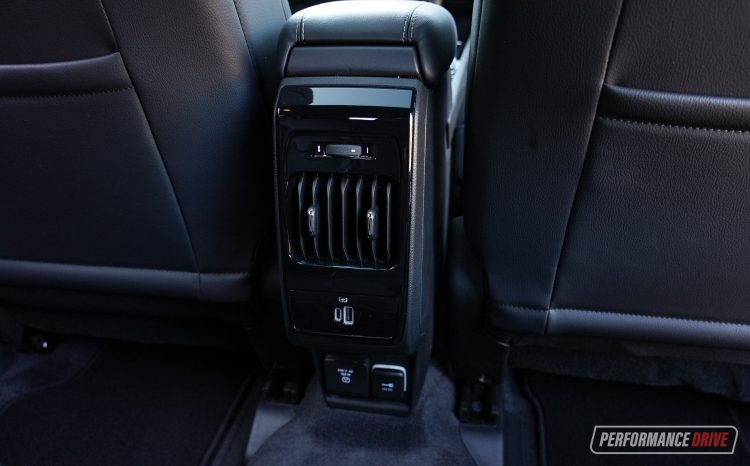 Rear passengers are treated to a set of air vents, and multiple chargers and even a 12-volt DC and 230-volt AC plug. Such a vast range of charging options is rare in this class. These are sure to keep the kids happy on road trips. The rear bench seat also features easy-to-access ISOFIX mounts and top tether points on the rear of the seat for all your child seat needs.

Jeep has updated the Compass with a hands-free tailgate, which opens up to a boot capacity of 438L. This is actually pretty impressive for the small SUV segment and, for a useless pub fact, is the exact same volume you’ll find in the larger Mazda CX-5. 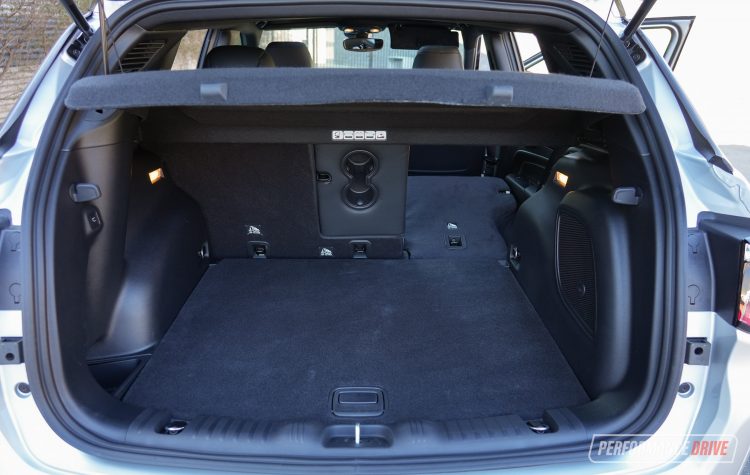 When it comes to driving, the Jeep Compass feels far less special on the road than a small SUV at this price range probably should. The S-Limited receives the same 2.4-litre naturally-aspirated four-cylinder petrol unit you’ll find on the base model, nicknamed the ‘Tigershark’, pushing out 125kW and 229Nm. Unfortunately, there’s a lot more bark than bite on offer.

It thrashes around when pushed and, compared with some rivals, offers unimpressive acceleration. We clocked 0-100km/h in 10.76 seconds, and that’s behind Jeep’s claim of 10.1 seconds. At times, the Compass feels far less powerful than its power figures suggest. To make things worse, the nine-speed automatic transmission is not as refined through the gears as most modern transmissions.

It seems to prefer to hold onto gears, but the engine quickly runs out of puff, rather than using the nine speeds it has on hand. Each ratio also seems quite long-winded, and we noticed the odd second-to-third shift around town can be incredibly stiff. 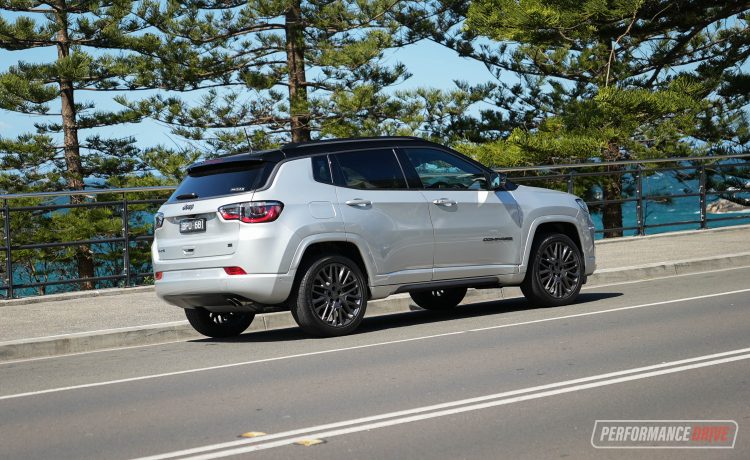 On the whole, the Compass is completely inoffensive and easy to drive, offering a tight turning circle and lightweight steering that make low-speed manoeuvres a simple task – especially with the help of the optional surround-view camera ($3195 – as part of the Premium Package). As you pick up speed, the steering becomes fairly numb, albeit forgiving for less confident drivers.

When it comes to ride comfort, the Compass has been fitted with a sturdy suspension setting. It remains confident around bends and possess little body roll. When tarmac stops and gravel roads start, it does outpace what you’d get from its main rivals off the bitumen, justifying Jeep’s claims about its weekend adventure potential. 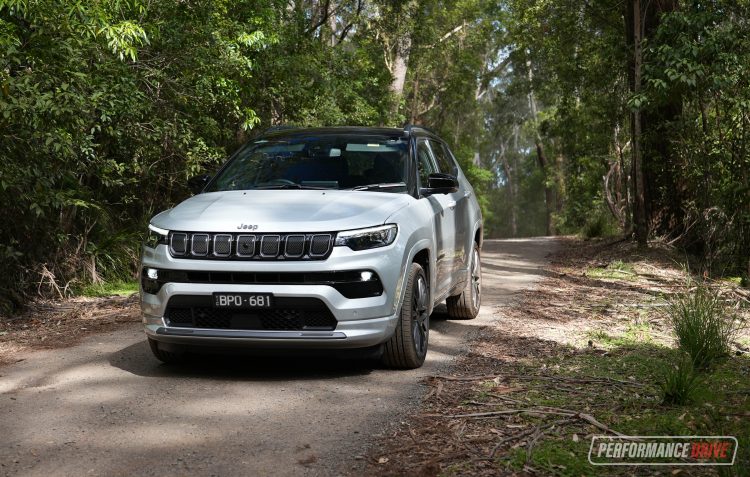 Further than driving on some gravel roads, though, the Compass’s off-road potential is severely limited by its unfavourable front end clearance. A good example of this is that you can often scrape the front end on a driveway, which doesn’t inspire confidence for genuine off-roading. The low-profile 235/45 tyres, although grippy on the road, also reduce the SUV’s adventurous capability.

Approach and departure angles are rated at 16.8 and 31.7 degrees, respectively, with 212mm of ground clearance and a break-over angle of 22.9 degrees. As any off-road enthusiast will tell you, an approach angle this low is not very encouraging. The current Suzuki Vitara, competing in the same class, offers 18.2 degrees. And it doesn’t really market itself as a rugged off-roader. 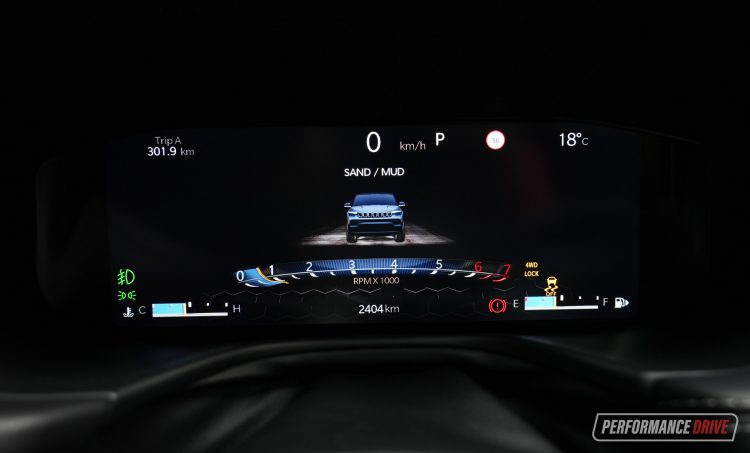 The fact that this S-Limited comes with a ‘sand/mud’ driving mode, and ‘4WD Low’ and ‘4WD Lock’ modes only makes the ambition-to-capability ratio worse. However, we do enjoy the different gauges and readouts available within the instrument cluster.

After nearly a thousand kilometres behind the wheel, we can only say that an SUV at this price point – particularly in an overcrowded and hyper-competitive market segment – should feel special in at least one way. The Compass sadly doesn’t. While being more accomplished with light off-roading, it failed to show us anything special or even particularly memorable about the drive experience. 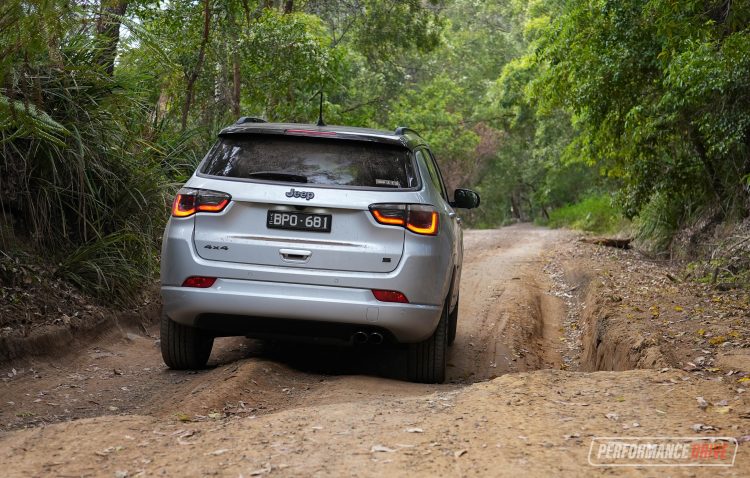 While we think the entry-level Jeep Compass has something to offer those looking to avoid the usual suspects in the small SUV market, we’re struggling to see how the S-Limited variant offers buyers a compelling value proposition. As a result, it’s a difficult task to recommend this particular variant to anyone other than die-hard Jeep enthusiasts who are looking for something smaller than the Cherokee.

On the plus side, the touch-screen media interface is one of the best in this class in our opinion, and the in-cabin practicality, including passenger spaces, leaves many rivals in its shadows. The S-Limited pack also looks attractive on the road, especially with the dark alloy wheels and black contrast roof.