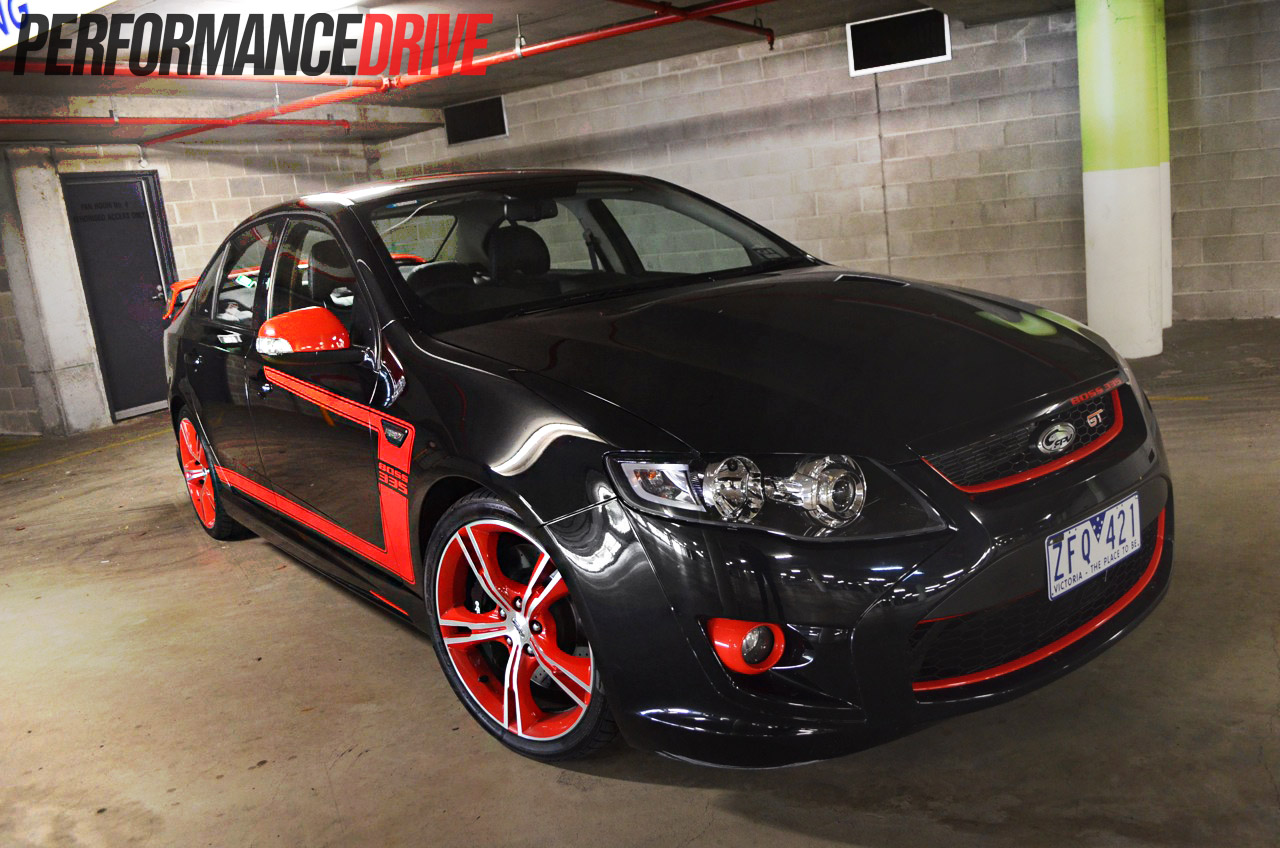 The 2012 FPV GT RSPEC is the most powerful car ever made in Australia. With 335kW and 570Nm available, launch control, serious suspension tweaks, and wider rear rubber, you just know this thing means business. 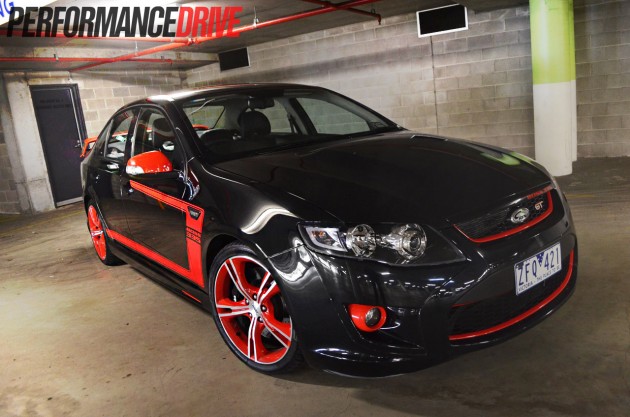 The 2012 FPV GT RSPEC was teased to the Australian public just before last year’s Australian International Motor Show with an image of its red-lined front grille and BOSS 335 insignia. This stirred up Blue oval fanatics Australia-wide, with some suggesting it might be the resurrection of the GT-HO nameplate. 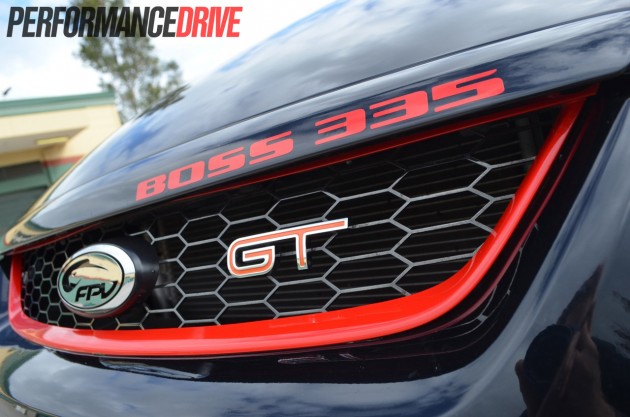 After much speculation, FPV revealed what is now known as the GT RSPEC. It doesn’t have any more power, but it does have wider rear tyres (275mm replace 245mm) than the regular GT and GT-P, and comes with an Australia-first launch control system. The Ford performance arm also fiddled with the suspension to assist with its agility, and of course added some aesthetic touches to make sure it looks the biz.

FPV is making just 350 examples of this exciting new model, making this one very rare Aussie performance car. The RSPEC’s performance-focused suspension setup and wider rear rubber improve cornering stability and traction, both of which aren’t exactly strong points on either the FPV GT or the more premium FPV GT-P.

The RSPEC is priced from $76,990, and is available with either a six-speed manual or a six-speed auto (auto is a no cost option). 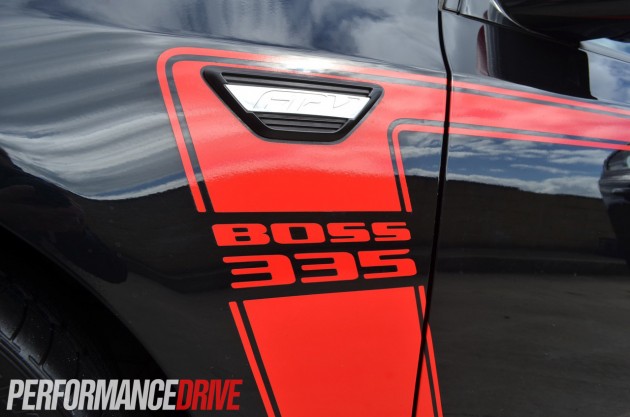 The standout feature of this car is most certainly its supercharged V8 engine. The 5.0-litre ‘Coyote’ unit is sourced from America, shipped to Australian shores, and is then fitted with a top-mount Australian-made Harrop supercharger, or blower if you like, and then they’re tuned to work together in perfect harmony. The end result is a blown V8 engine that would impress even the biggest HSV diehard. We dare say this is one car you could win a burnout competition with right out of the box.

The 335kW figure FPV claims as the flywheel power seems to be a bit of a farce. While we’re not accusing FPV of telling fibs, it’s hard to ignore the dyno results automotive tuners from all over Australia have been producing from showroom standard cars; anywhere from 330kW to 350kW at the wheels (the variation in figures could be purely down to different dyno equipment, weather conditions, fuel used, and altitude). Those figures suggest to us that the real flywheel power output of the supercharged FPV GT hovers around the 380kW mark. Wow. 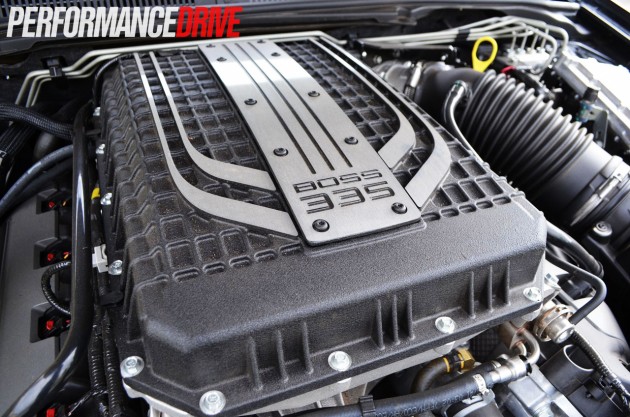 In the rear FPV has strengthened the rear lower control arms, fitted up a 19mm rear anti-roll bar, fitted stiffer springs, and retuned the damper settings to make the most of the new wider rear tyres. The transmission mount has also been strengthened.

Out of the 350 GT RSPEC models produced, 175 of them sport the Silhouette black paint with red wheels and decals (as tested). Other colours available are Vixen (red), Kinetic (blue), and Winter White.

Inside the RSPEC is a regular FPV affair. Piano Black highlights throughout the cabin replace the tacky silver you get in the GT and GT-P. The RSPEC seats are pinched from the GT-P, and offer excellent levels of comfort and support for a road-going vehicle.

Given it’s a essentially a Falcon, there’s loads of room for five, making little to no difference if your passengers are tall or wide. Boot space is a generous too, with 535-litres. The boot becomes even more useful when the 60/40 split rear seats are folded down. 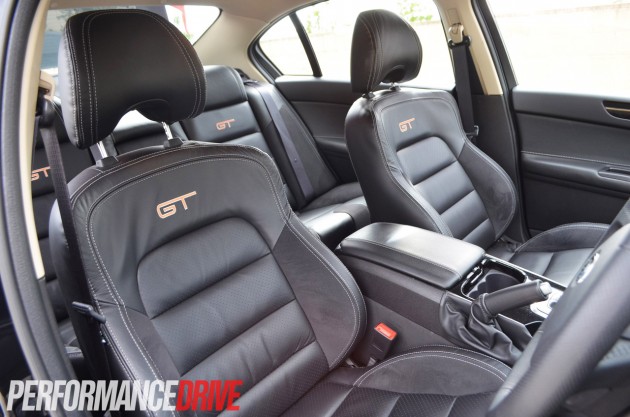 Helping the GT RSPEC feel every bit its worth is a unique GT RSPEC make number plaque, FPV scuff plates, a 260km/h speedo, and push-button start.

Along with the launch of the FG MKII range came a new eight-inch Interior Command Centre (ICC) LCD touch-screen multimedia interface with integrated reverse-parking camera (it replaces the old Human Machine Interface [HMI] screen). The new screen is a much more user friendly interface. Strangely, satellite navigation isn’t standard and will set you back $1200. 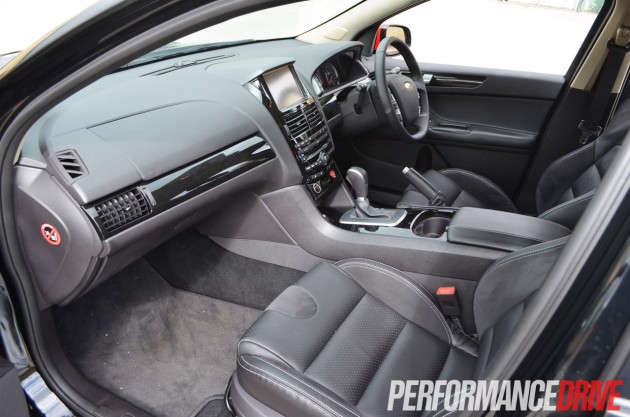 The RSPEC comes with an eight-speaker stereo as standard, which includes a rear-mounted subwoofer. Sound from the system is good, but anything with too much bass tends to upset the speakers when cranked right up. Bluetooth is standard, as is USB and aux-in for extra convenience.

If you love having the best of everything, forking out $6390 for premium cross-drilled Brembos won’t bother you whatsoever. Leather trim in the RSPEC is a no cost option.

The RSPEC stands out from the other FPV offerings like a stubbed toe. The red wheels, various red body highlights, black exhaust tips, red mirrors, red rear diffuser-section, and red decals make the RSPEC look more like a full-scale Hot Wheels car than an FPV. There’s little to no chance of getting about unnoticed. 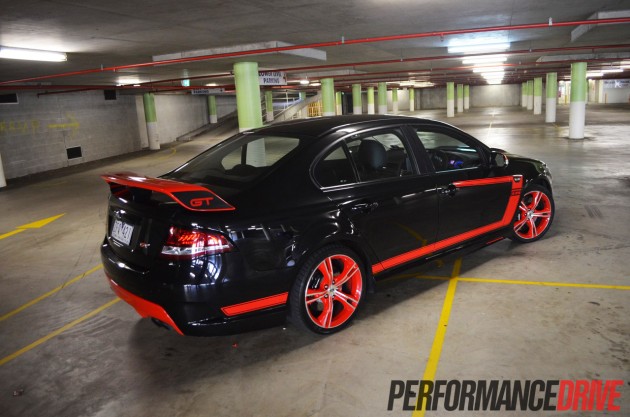 The RSPEC is fitted up with the same body kit you get on the GT and GT-P, but the stripe is a little different and the rear spoiler has GT insignia on the sides. The 19-inch five-spoke staggered wheels suit the GT nicely, however, the red paint might be a bit much for some.

The first thing you notice about any Boss 335 GT is the engine note on start up; it’s unlike any other Falcon before it. The bi-modal exhaust system lets out a nasty growl when you hit the push-button start, and settles into a nice baritone idle. Blip the throttle and you get an earful of supercharger whine and a raspy exhaust note that stinks of pure grunt. The bi-modal exhuast works to keep things quiet when you need, and opens its lungs when you want to be noticed. 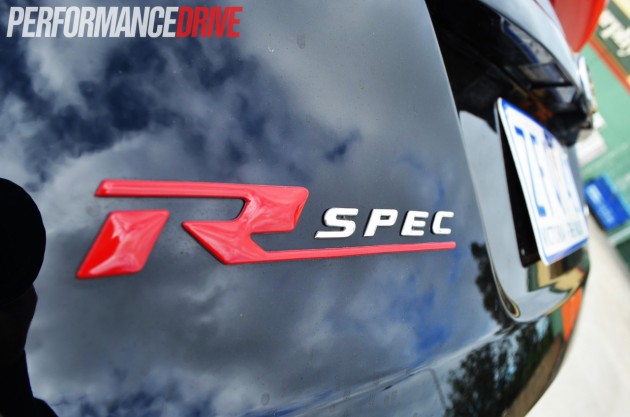 It’s never a case of finding the right gear or the right rev range to get moving; just stomp the pedal and it moves, fast. Without a doubt the FPV GT RSPEC is the fastest Australian-made V8 performance car made to date. It’s what Ford fans would call a HSV killer. We timed 0-100km/h in 4.9 seconds. The extremely quick time comes thanks the all-new launch control system; hold the brake, dial up some rpm, point, and shoot.

Power delivery through the ZF six-speed auto feels direct, be it in either ‘D’, or ‘Performance’ mode. Driving around town the gearbox does its fuel-saving best to hunt up the gears as fast as possible. Take it out of the city and feed the throttle some beans and the six-speed auto scales up and down gears intuitively.

Selecting gears manually with the gear stick can be fun, but, we think it’s about time FPV introduced some paddle shifters. If you plan on taking your RSPEC to track days, or plan on driving out the side windows, definitely go with the six-speed manual; the ZF gearbox is tuned in a way that cuts power for a split-second between gear shifts to save it from eating itself. A pitfall of this is it tends to kill any sideways action you might be enjoying. Boo. 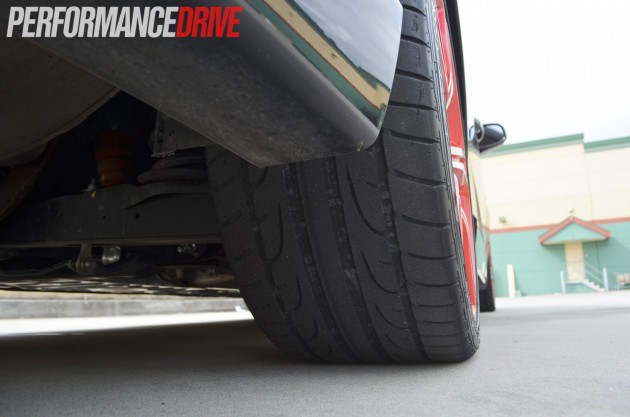 Handling-wise, it doesn’t take long in the RSPEC to notice the suspension tweaks and chassis improvements. The steering off centre is a lot more responsive, and body roll is reduced over of the GT and GT-P. However, the big sedan never lets you forget there’s a heavy V8 under the hood, still wanting to push the front wide if you up the ante in the bends.

At the expense of being a better performing handler, ride comfort is severely compromised. You feel just about every bump and lump in the road, and your back (and the wheels) will know about it should you hit a pot hole. It can be a sacrifice worth living with though, especially as it provides a more agile and capable V8 performance car when you get enthusiastic behind the wheel. 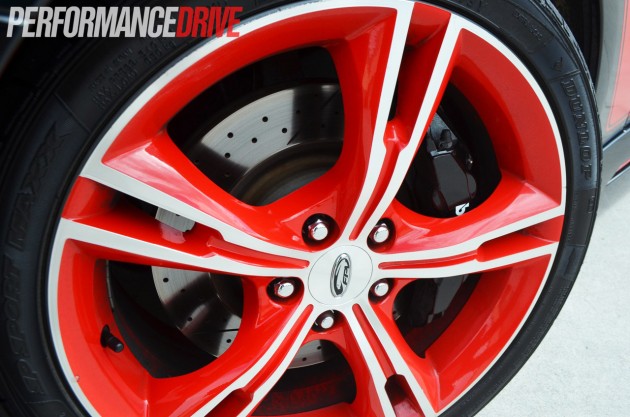 Rear-end grip is improved thanks to wider 275mm rear hoops, and as a result the traction threshold when blasting through a series of bends is a lot higher. If you feel like drifting, the new stiffer suspension helps with tail out action, keeping the car flatter and letting you keep a slide going pretty much as long as you want.

Transitioning a slide is something the standard GT can’t do without giving you the feeling you’re off on a date with the trees. Weight shifts are noticeably more stable and controlled in the RSPEC.

Our test car is fitted up with the optional $6390 cross-drilled and slotted Brembo brake package, and there’s nothing we can say other than they never succumb to brake fade or lack of pedal feel, even after serious abuse. If brake pedal feel and high braking performance is something you take seriously, it’s a no-brainer option in our opinion.

What more can we say, on a bang-for-your-buck scale, the GT RSPEC sits alone. While HSVs are certainly powerful and capable machines, how can they compete against a supercharged V8 sedan that sounds like it invented thunder and accelerates like no other Australian-made car?

The RSPEC is as close as you can get to buying a Ford V8 Supercar for the road. In saying that, it could easily turn from daily-driver to a capable weekend track car without lifting a spanner. With just 350 being made, it’s sure to be a quick sell-out. 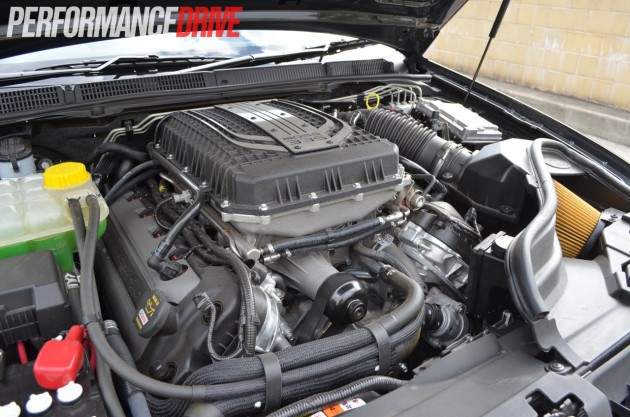 Chrysler 300 SRT8 – 6.4-litre naturally aspirated V8, 347kW/631Nm – 2012kg – $66,000
The 300 SRT8 is the most powerful sub-$100k performance car on sale in Australia. It looks very imposing and dominant, especially at night, and it comes with some super-cool performance features such as a quarter-mile timer and a comprehensive multimedia interface. Not quite as dynamic as the Aussie rivals in the bends though.