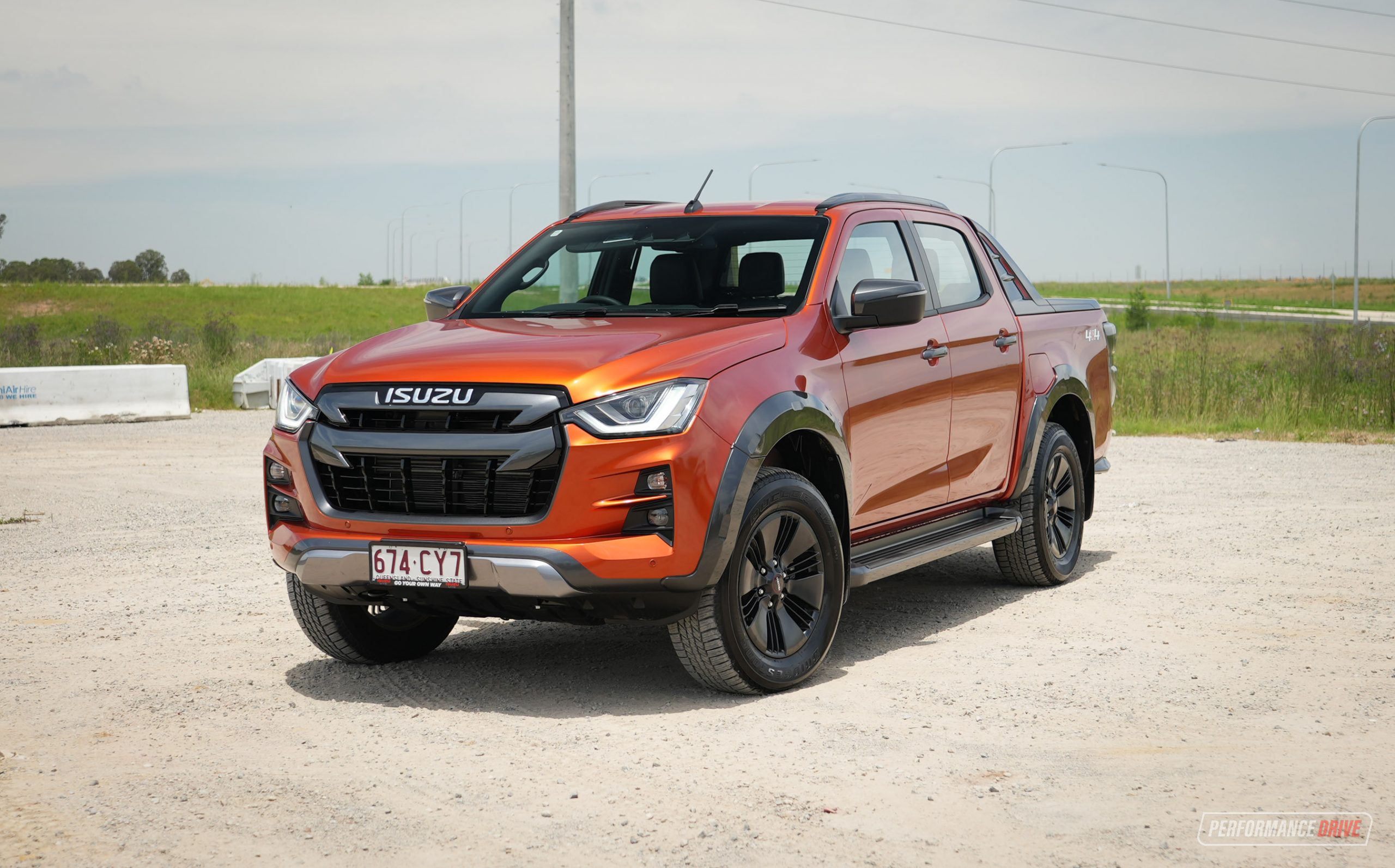 The 2022 Isuzu D-Max X-Terrain sits smack bang in the middle of arguably the most competitive automotive market there is. Dual-cab 4×4 utes have dominated sales in Australia for some time. For this lightly updated model, Isuzu appears to have had a keen ear to the ground to hear what buyers of this class need and want most in a ute, because now it is a more tempting option than ever before. 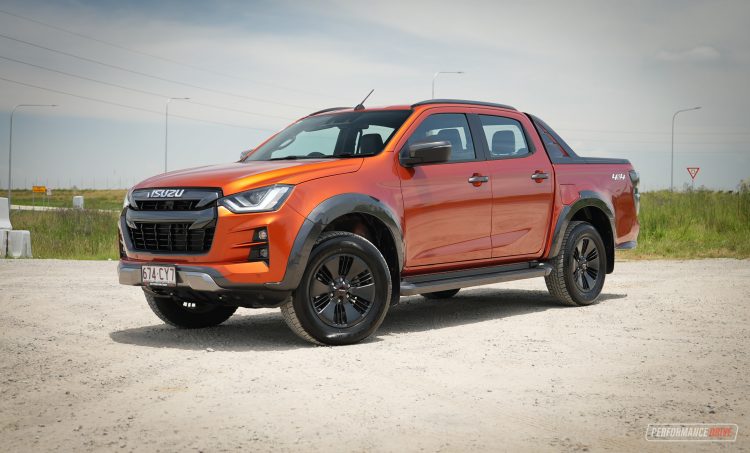 A range of small but important changes have been applied to most of the 2022 model year lineup, including the introduction of a 1.9-litre turbo-diesel option for lower grades, increased load capacities for some, added features almost across the board, and Isuzu has made some revisions to its active safety system – yes, the pesky lane-keep assist can now be switched off with one button press.

Prices have increased, partly due to demand and parts shortages, but it means the flagship X-Terrain now starts from $65,900, instead of $63,900 in 2021 (excluding on-road costs). That’s getting up there for a D-Max, a model that has always been fairly conservative in pricing battles with the competition. 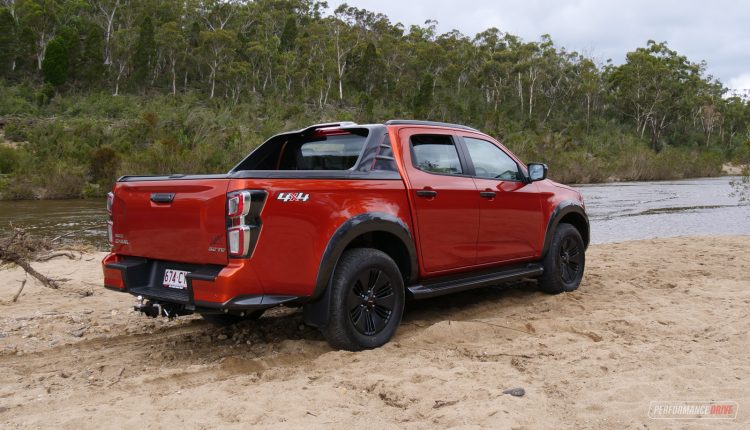 Featured under the bonnet is the same ‘4JJ’ 3.0-litre turbo-diesel that was introduced in 2020. It pumps out 140kW and 450Nm, which is about average for this class, if not slightly below against the newer wave of entrants coming in. The X-Terrain comes standard with a six-speed automatic transmission with selectable rear- or four-wheel drive with a rear diff lock.

It’s the exterior of the new D-Max X-Terrain that will both appeal and polarise buyers. The 18-inch dark grey wheels are certainly an acquired taste but seem to be well matched to the hulking wheel arches, aggressive front bumper styling, chunky clear taillights and rear tub spoiler (roof plastic thing). In our opinion it all seems to work to create a masculine look that seems to be the craze for top-spec utes nowadays.

The latest model is fresh inside. Whereas the previous generation D-Max was slightly undercooked in terms of material refinement and comfort, the new generation presents almost like a road car or SUV. The 9.0-inch touch-screen is a good size but lacks a bit in functionality, and you can’t browse radio stations while you’re driving due to safety initiatives. It’s a bit over-the-top in our opinion. 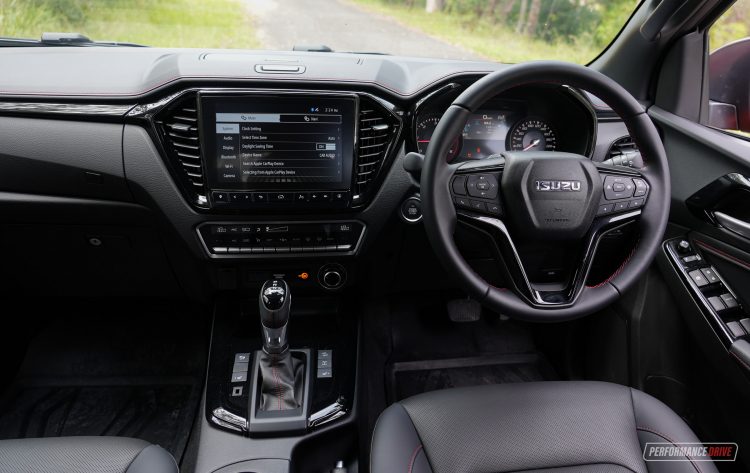 The eight-speaker Sky Sound audio system offers DAB radio and Apple CarPlay/Android Auto, but the software is a bit of a letdown due to how slow it loads. It seems crazy to whinge about such a system in a ute when, only ten years ago, all we got in top-spec utes were some knobs and buttons. Nonetheless, we’re here to be critical of the current product at hand in today’s market.

The seats present more like they’re from a Subaru WRX than a 4×4 diesel ute, and thankfully they’re just as comfortable to sit in as they are appealing to look at. Seat heating in the front is added for 2022. Perhaps it’s all the red stitching, new for the 2022 model. Whatever it is, it works. There’s also plenty of storage around the place, with deep cup holders capable of supporting the biggest of coffees, as well as additional spots atop the dash and centre console. 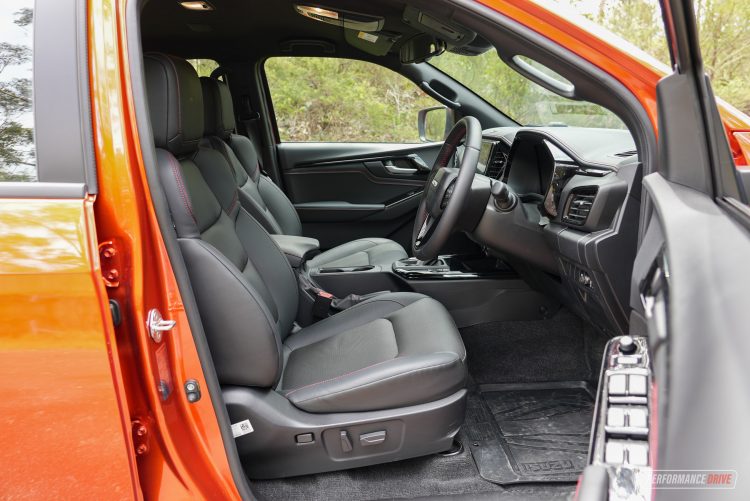 Rear space is good compared with some rivals, and it is excellent to see climate vents in the back. There’s even a USB charging port, along with centre cup holders and pockets in the doors. You might notice the hidden shopping hook on the back of the passenger seat too, which comes in handy during quick trips to the shop.

As for load-carrying ability, Isuzu has increased the gross combination mass by 50kg for 2022, to 6000kg. This is a more important figure than the towing or payload capacity in some respects, as it governs how much you can be hauling overall. Sure, it’ll take a 3500kg braked trailer, but minus that and the 2165kg kerb weight from 6000kg and you’re left with 335kg for passengers and any load in the tray. That’s not much. Three chubby mates will put you over the limit. However, many of the popular rivals aren’t much better in this area. We recommend taking a close look at the GCM during your shopping around to make sure it suits your needs. 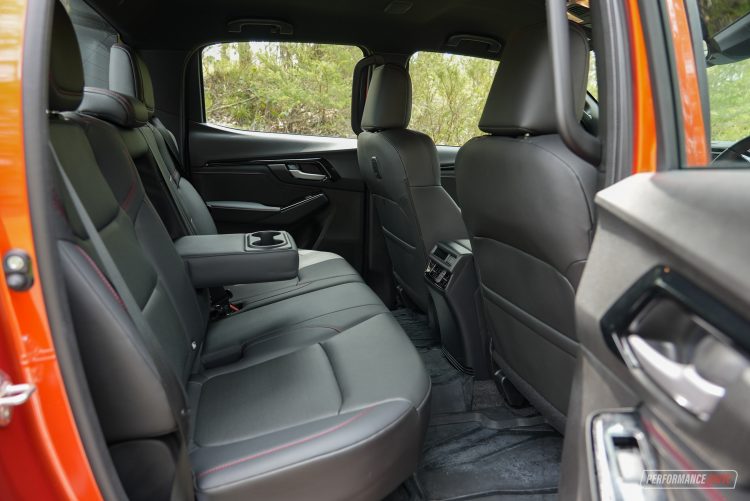 The D-Max X-Terrain is a solid rig on the road. It drives straight like a freight train, but has enough athleticism to enjoy some bend action in the country side. With 140kW and 450Nm on tap, paired with a six-speed automatic, grunt is more than ample and is delivered smoothly. Max torque is achieved from just 1600rpm, making it perfect for towing or carrying a 935kg-rated payload.

The 4JJ3-TCX 3.0-litre four-cylinder turbo-diesel engine and Aisin transmission combo feels bulletproof. While it might not be the fastest or the most powerful in its class you get the sense that Isuzu know a thing or two about producing a high-quality product. Even so, we clocked 0-100km/h in a very respectable 9.59 seconds, bettering our previous time. That sort of figure is currently being reported in more powerful utes, such as the 157kW Ford Ranger (we got 9.20) and 150kW Toyota HiLux Rugged-X (we got 10.03). 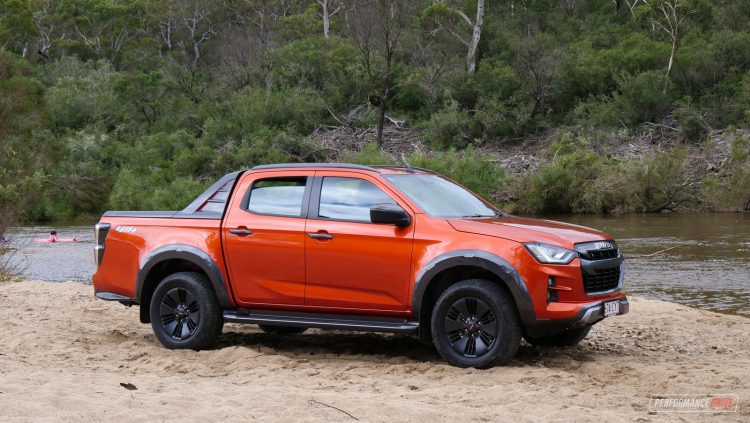 At 5303mm long, it is noticeably cumbersome in tight car parks and in the city. But you do get used to it. Most of the alternative utes are similarly long anyway, so this is just a sacrifice you have to pay. If it is not acceptable to you then you need to look at the SUV market, including the D-Max’s brother, the MU-X.

Off road the X-Terrain’s 4×4 system is a treat. It is no fuss in operation, with simple modes to choose from, and the vehicle possesses loads of grip and clambering ability. But, to nit-pick, the side steps seem to hang quite low. Too low, in our opinion. Ground clearance is measured at 240mm, and the approach angle is 30.5 degrees with a departure angle of 24.2 degrees. The main limiting factor off road are the highway-terrain tyres. But that’s obviously something you can change depending on how serious you are about hitting the dirt. 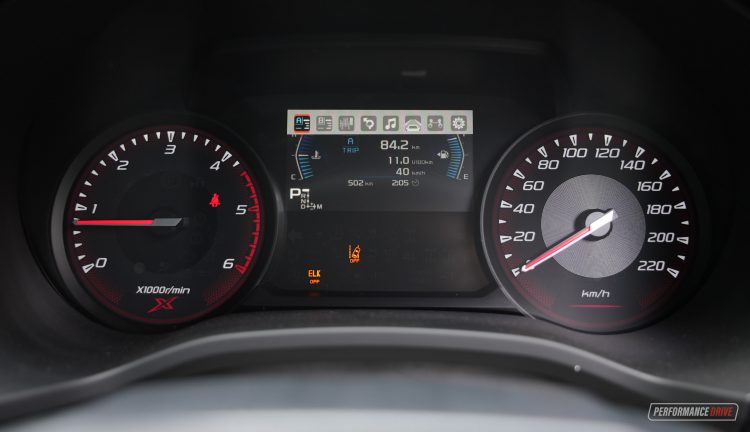 In terms of safety, the D-Max receives a five-star safety rating, which is great, however, some of the safety systems on the car can be overbearing at times. Notably, the Lane Support System often wants to pull you around in the lane, which seems odd because this system is designed to keep you nicely between the white painted strips.

Previously you’d have to go through multiple steps in the instrument cluster menu (while stopped) to disengage them. However for the 2022 model you can now shut this off by holding down a button on the steering wheel for a few seconds. Much easier and a welcomed function. 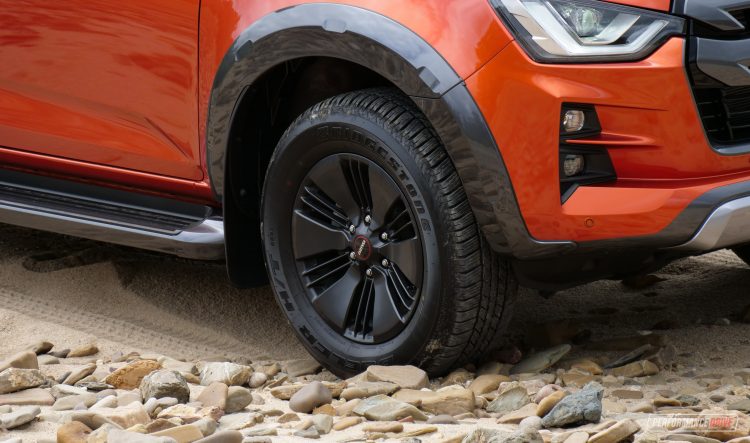 The D-Max X-Terrain should be on your shortlist. It’s a standout visually (especially in this Volcanic Amber hue, a $650 option) and feels solid and ready for whatever you can throw at it. Changes made for 2022 are small but create a nice evolution on an already sound underlying product.

PROS:
– Strong but modern design
– Drives like an SUV most of the time, comfortable too
– New lane support ‘off’ button is a great addition for 2022
– Good performance despite average power and torque figures
– Exceptional reliability history, with 6-year/150,000km warranty

CONS:
– Touch-screen: layout, loading times and over-the-top safety; can’t browse when driving
– Top-spec X-Terrain could do with all-terrain tyres
– Price is getting up there
– Low side steps