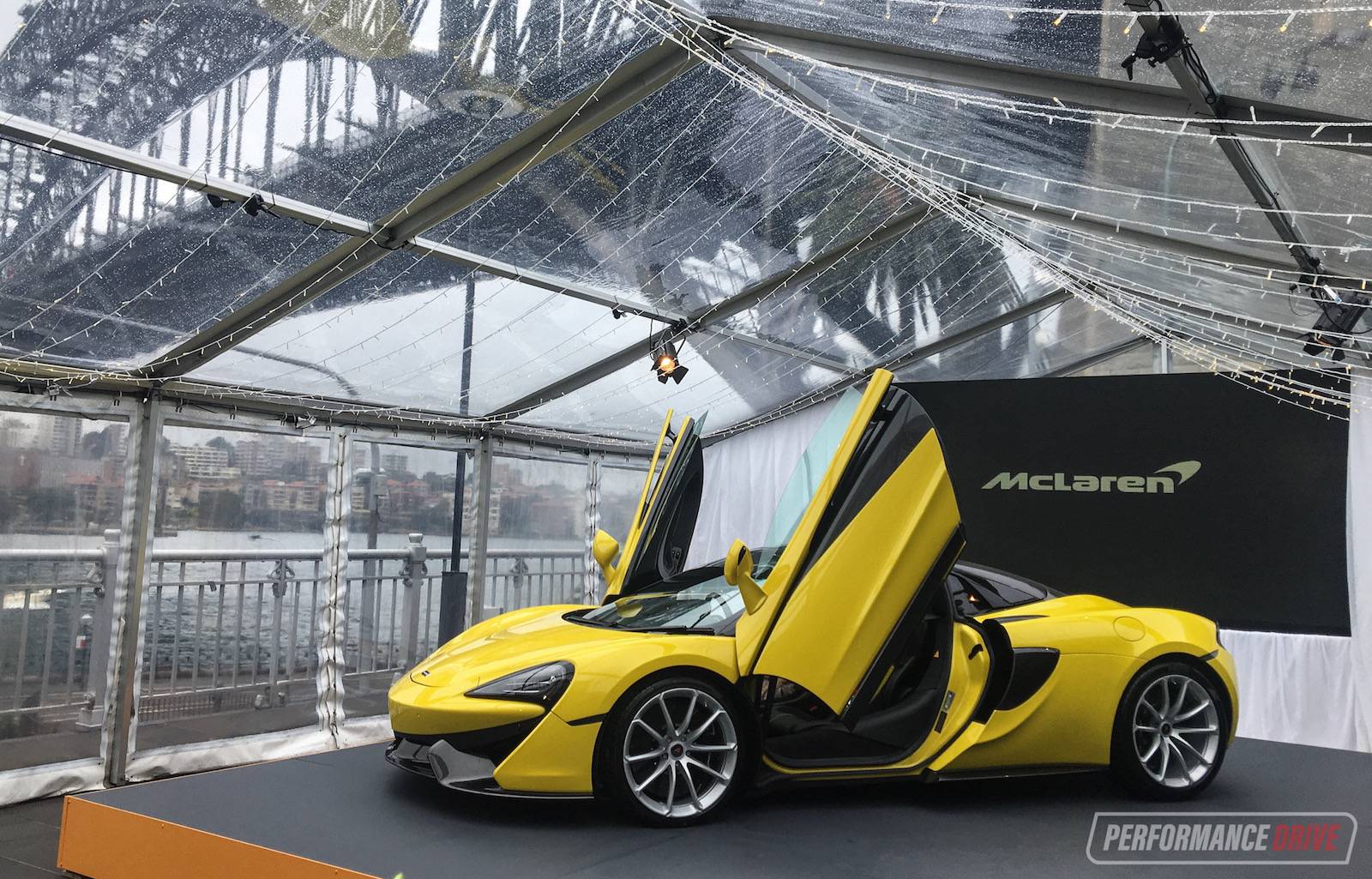 The stunning new McLaren 570S Spider has made its Australian debut in Sydney today, arriving as the most affordable convertible Macca on the market. 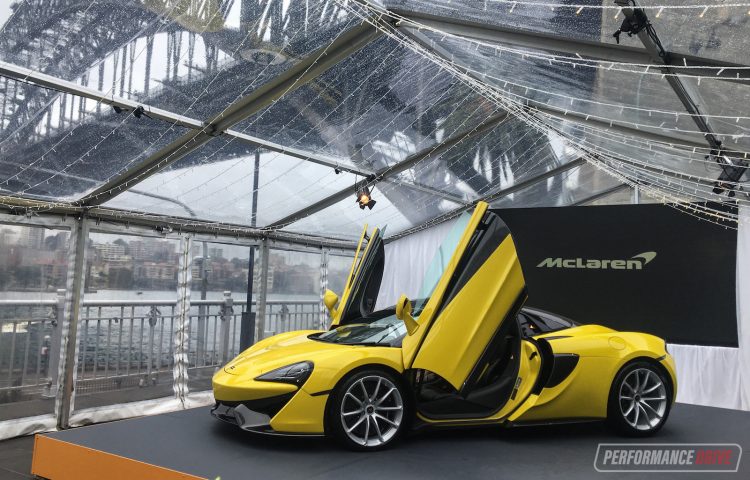 Initially unveiled in June this year, the 570S Spider is part of the Sports Series family. In fact, it is the upper-most variant of the Sports Series, sitting just above the 540C and 570GT. It’s looking to help McLaren continue its recent sales achievements in Australia. George Biggs, managing director of McLaren Automotive Asia, said:

“It has been an outstanding year for McLaren. We’ve received a phenomenal response since the release of the 720S, followed by the announcement of our fourth consecutive year of profitability and today we celebrate the launch of the latest addition to the McLaren Sports Series family. The McLaren 570S Spider is a convertible without compromise, with an attractive retractable hardtop that delivers the exhilaration of roof-down motoring. It is an extremely thrilling car to drive. I cannot wait to see it being driven on Australian roads.”

McLaren says there are no performance compromises with the new Spider compared with the coupe counterpart, offering the same dynamic ability and driving engagement. Actually, the driving engagement is probably higher when the roof is dropped thanks to all of the sunshine coming in and more aural pleasure available.

Speaking of the roof, it’s an electronic hardtop setup which can be opened or closed in 15 seconds. Should one encounter a sudden downpour of rain with the roof down, McLaren has designed the car so it can be driven at up to 40km/h while the roof is in process of closing (or opening). 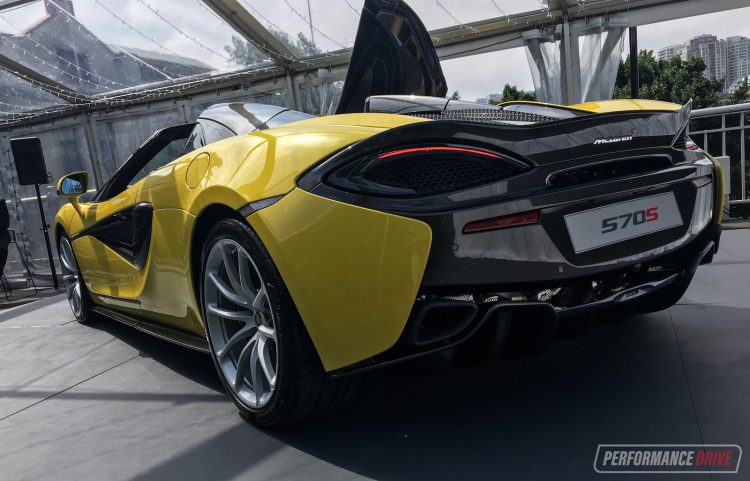 Straight line speed doesn’t tell the full story though. The 570S Spider is all about driving, preferably in the mountains or along a beautiful coast road such as the Great Ocean Road. With a weight premium of only 46kg over the coupe, the structural rigidity and driving agility is unchanged.

The strong MonoCell II frame is made from carbon fibre, as with all Sports Series models. Due to the inherit strength of the frame McLaren says there was no need to add reinforcements, like you might see in steel or aluminium vehicles. This means you’re getting the full potential of the MonoCell II platform without any drawbacks. 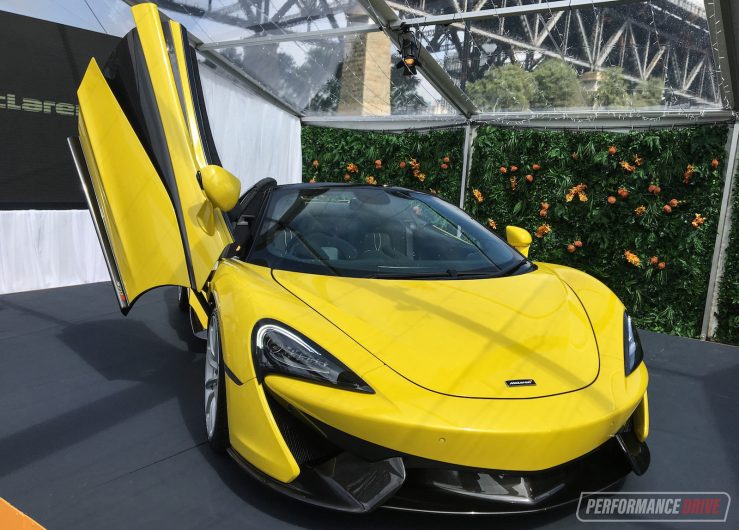 Out on the road, passengers can raise a special glazed wind deflector at the touch of a button, which helps to reduce wind buffeting. Even when the roof is up passengers can lower the deflector to enjoy more of the engine sound right over their shoulder. For those wanting more sound McLaren does offer an optional sports exhaust system.

Inside, the decor incorporates the finest hand-stitched leather for the door casings and dash, with various seat options including standard six-way power adjustable or eight-way adjustable items with either Nappa or Alcantara. Buyers can also option for carbon-shelled seats from the P1 hypercar.

On the dash is a 7.0-inch IRIS touch-screen interface where all climate and infotainment controls are found, with a 10-inch TFT digital display for the driver’s instrument panel. Loads of other options and customisation accessories are also available, including special wheels, paint colours and brake and suspension parts.

The McLaren 570S Spider is on sale in Australia now priced from $435,750 (excluding on-roads), with deliveries kicking off over the next couple of months. 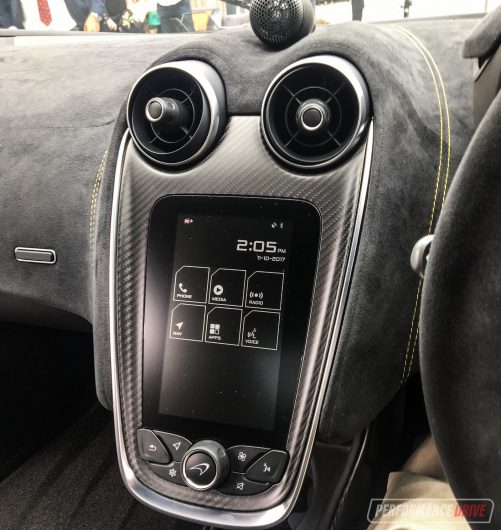