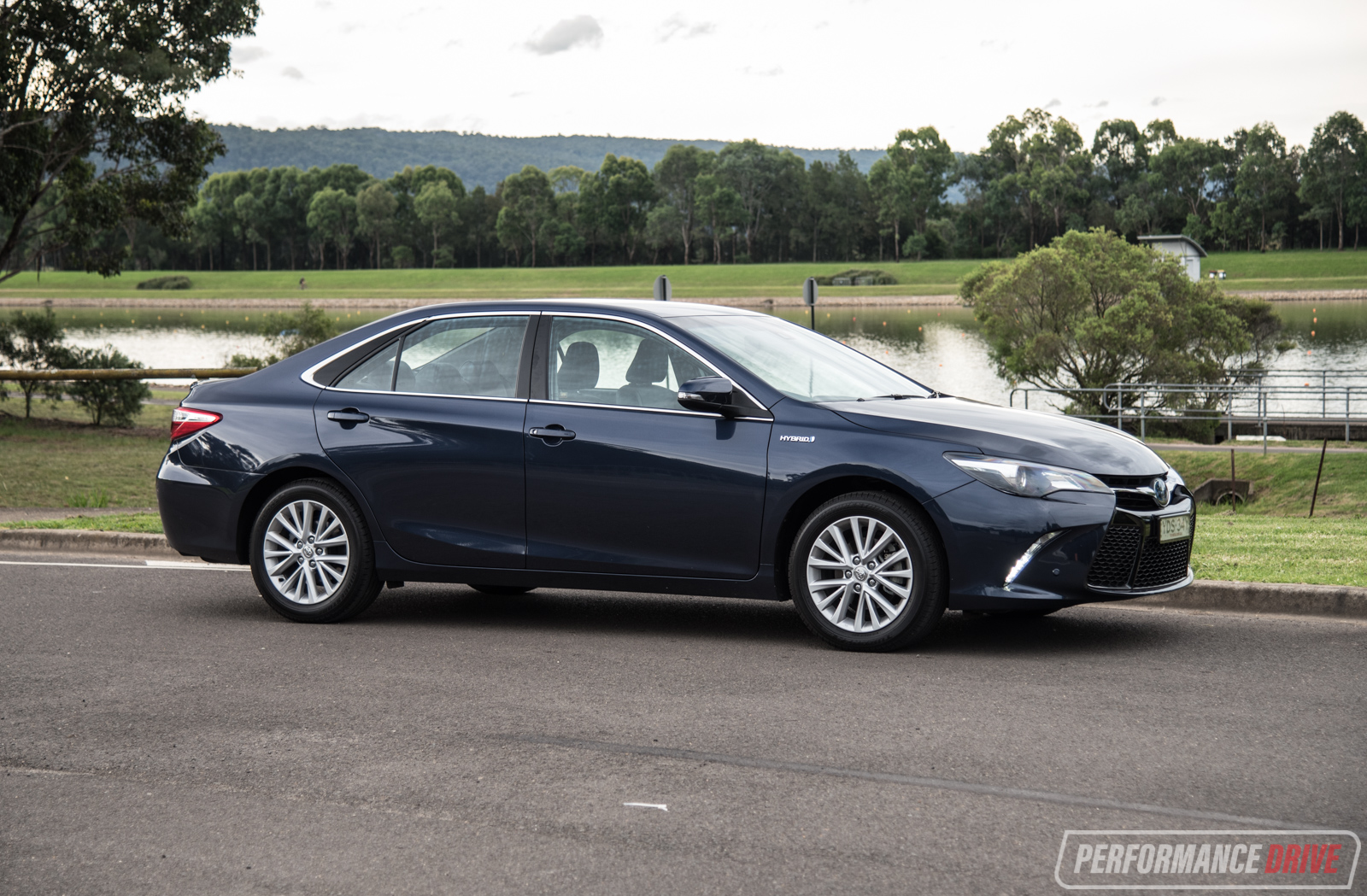 Toyota Australia sells thousands of Camrys every month. But, strangely, there is no sports variant to attract a wider demographic. Instead, the most powerful and quickest variant is the Camry hybrid. 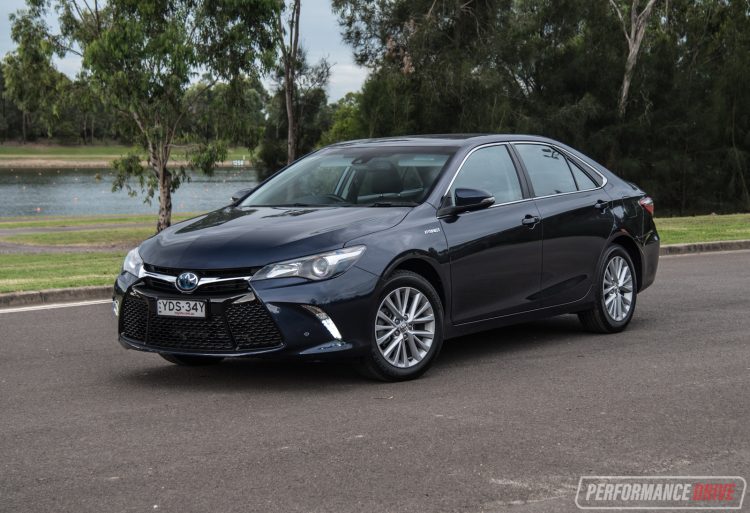 Next year Toyota Australia will be introducing the all-new Camry, based on Toyota’s New Generation Architecture. Buyers will be offered three different powertrain options in Australia, including a powerful V6 once again.

For the current generation Toyota instead offers the hybrid package in all trim levels – denoted by blue-highlighted badges. This opens up the appeal of economy and performance to a broader audience and their budgets.

Here we’re testing the flagship Atara SL hybrid, which is the most premium Camry offering. Prices start at $40,440, but buyers can step into the base model hybrid from $30,490 (excluding on-road costs). 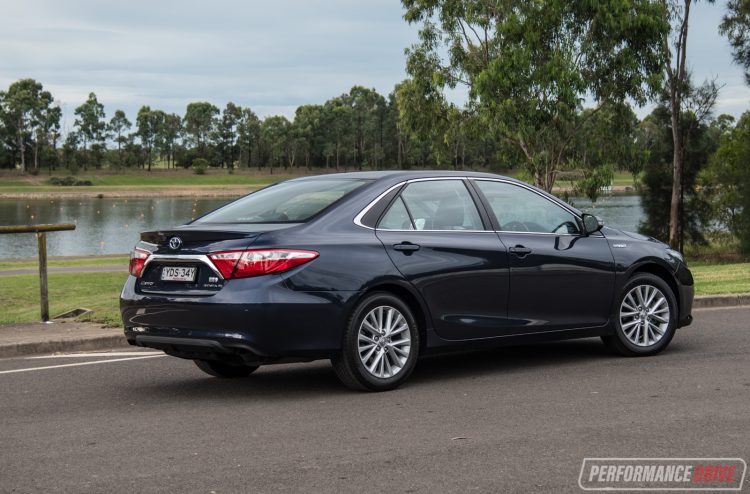 If you’ve lived in Australia for at least a few years or you live in one of the capital cities, chances are you’ll have been in a Camry before. A taxi or Uber, specifically. So obviously it must be a great car for commuting and taking passengers if ride services use them?

It certainly is. The Camry might be a vanilla product in an isle of wizz-bang adventure SUVs, coupe crossovers and sophisticated sports cars, but we kind of appreciate the Camry for sticking to its heritage and remaining what the car was initially designed for; transport.

This humbling character starts with the cabin. It’s both very accommodating and user-friendly. You won’t get any complaints from any passenger in regards to seating space. In the front the wide and relatively flat seats don’t do much to hold you in during cornering, but they are comfortable and will keep all size individuals happy.

Most of the fixtures are out of your way, leaving an open environment to move about. Needless to say, it is the least claustrophobic car in the class. All dash controls are instantly recognisable and easy to understand, with big clear buttons highlighting common functions. 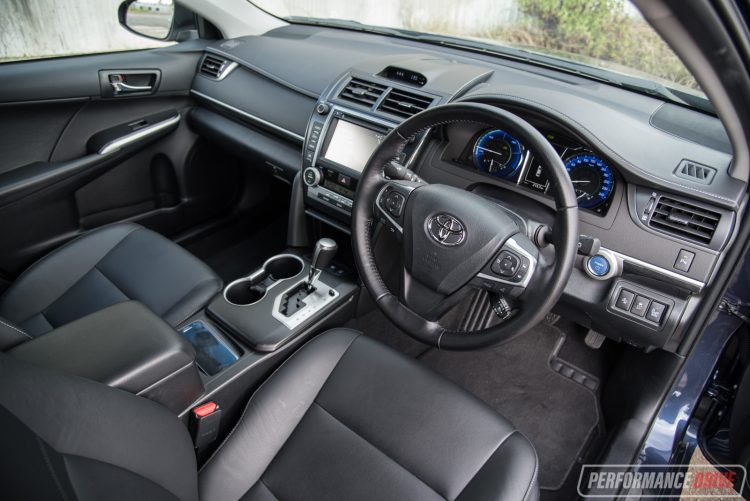 In the back there’s almost more space than in the front. Being front-wheel drive means the floor is completely flat, with no transmission tunnel protruding and sapping middle seat legroom. Fitting three abreast is a cinch thanks to the wide bench, and the depth of the bench also provides good under-thigh support. Rear passengers are treated to their own climate vents located in the back of the centre console.

For the top-of-the-range Atara SL we have here, dual-zone climate control is standard, along with one of Toyota’s latest touch-screen multimedia interfaces. The interface isn’t going to win any awards in terms of design or graphics, but it does the job much like the rest of the car; it’s honest, reliable and advanced enough without being too complex. The Atara SL also comes with a leather upholstery with soft leather-like sound-absorbing trimming for the dash, combining to present a genuine level of prestige.

Boot space is abundant too, as you might have expected. The wide opening provides a flat floor, with a full-size alloy space-saver spare mounted underneath. Despite being the hybrid and featuring a bulky battery pack, the hybrid Camry Atara SL offers a decent 421 litres of space. This is down on 515 litres available in the regular petrol version. 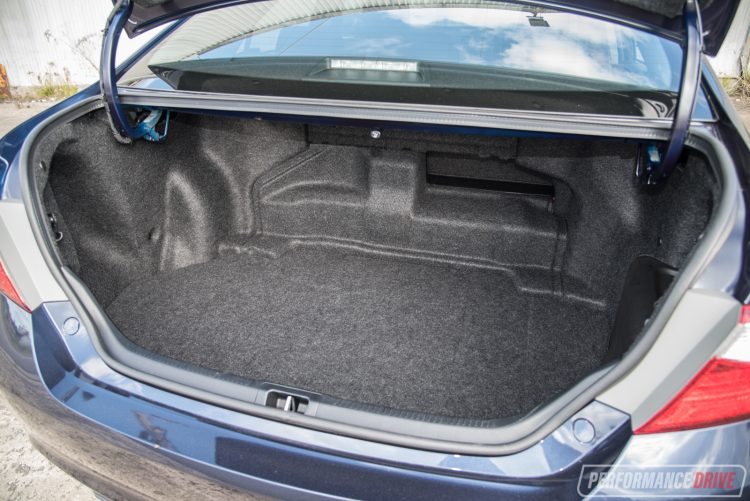 Toyota has been developing hybrid systems for over two decades now, and is regarded as the pioneer of the technology in terms of mass market production and availability, initiated with the Prius back in 1997.

In the Camry you get a 2.5-litre ‘Atkinson Cycle’ version of the regular 2.5-litre naturally aspirated four-cylinder engine, producing 118kW. This is paired to an electric motor assist system that boosts overall power output to 151kW, making it the most powerful Camry currently on sale (regular 2.5 non-Atkinson petrol model develops up to 135kW in Atara form).

Across the 0-100km/h sprint we clocked a time of 8.19 seconds, which is actually quite quick. And with a lot of torque available straight off the line thanks to the electric motor, it can be satisfying knowing you can squirt up to speed quickly, particularly in the city where you’re dealing with plenty of last-minute decision-makers and ending lanes.

Around bends and along rhythmic, higher-tempo roads, the Camry isn’t as rewarding. The steering is just steering, in that it turns the front wheels. There’s not much engagement or any sort of interactive enjoyment coming through the wheel, with a rather heavy and raw turn-in feel. Part of this is because there isn’t much to convey in terms of chassis prowess and flair.

Body roll is acceptable for this class, but overall driving dynamics in the bends doesn’t set the class benchmark on fire. Both the Mazda6 and Volkswagen Passat offer a more enjoyable drive experience in our opinion, especially through the steering. Obviously this segment of vehicle isn’t designed to entice excitement, but we are looking forward to the next-gen Camry on the new platform, arriving late this year. 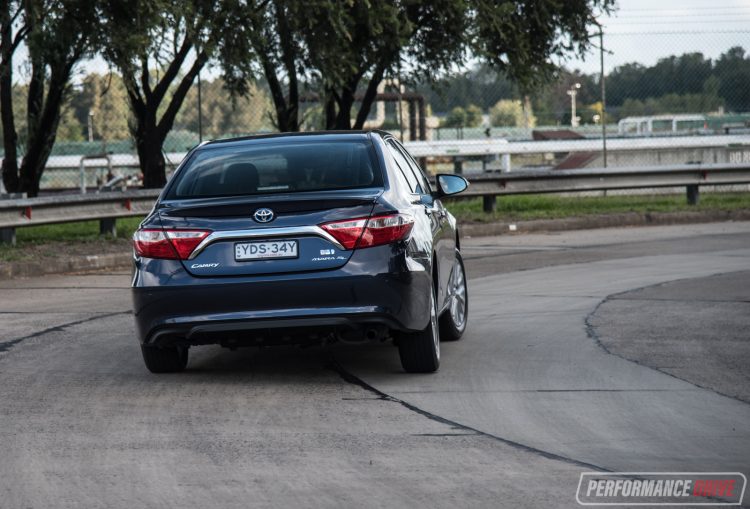 Where this vehicle will likely spend most of its time is in the suburbs and in the city. And this is where the Camry shines. It’s extremely smooth and quiet on the road, navigating around streets and obstacles calmly and pleasantly. Subtle suspension absorbent rates provide a comfortable ride, with decent wheel travel to soak up bigger road connections and pot holes. The steering might not be the most communicative, but it conveys all of the vital information that you need, such as wheel placement on the road and any potentially threatening information such as uneven surfaces or slippery conditions. Leaving out some of the finer detail and feedback does somewhat improve relaxation.

With the electric motor developing 105kW alone, the Camry hybrid is able to drive off from the line in electric mode. It lasts up to around 40km/h, at which point the petrol engine whispers into existence automatically. There is a slight vibration during this process, but not much is heard. Compared with any of the combustion-engine rivals, it is easily the quietest powertrain overall. Unsurprisingly, fuel economy is also brilliant. Even in the real world. We experienced around 6.2L/100km in the city and as low as 5.8L/100km on the highway. A full-tank range of 1000km or more is quite achievable.

Going for the top Atara SL variant transforms the humble Camry into an undoubtedly luxurious package, too. The leather upholstery, adaptive cruise control and other driving assistance features like blind-spot warning, and a power rear blind pair well with the serenity, making the car feel like a much more expensive vehicle. If you’re after comfort and relaxation above all else, we’d put the Camry Atara SL hybrid at the top of the class, in this price range.

So, it’s not the most sporty sedan in the class, expectedly, but if you simply want a trustworthy and very economical sedan, that offers bags of space and a good level of standard features, the Camry hybrid is a great product.

We like that it is so humble. It’s not pretending to be anything else, unlike many vehicles on the market at the moment that are trying to cover too many skill sets. The fact that it’s built by the biggest car manufacturer in the world only amplifies the attraction to those in this specific market. For us, we’re also surprised by its off-the-line performance. It’s no wonder those who drive the most out of all of us, taxi and Uber drivers, swear by these cars.