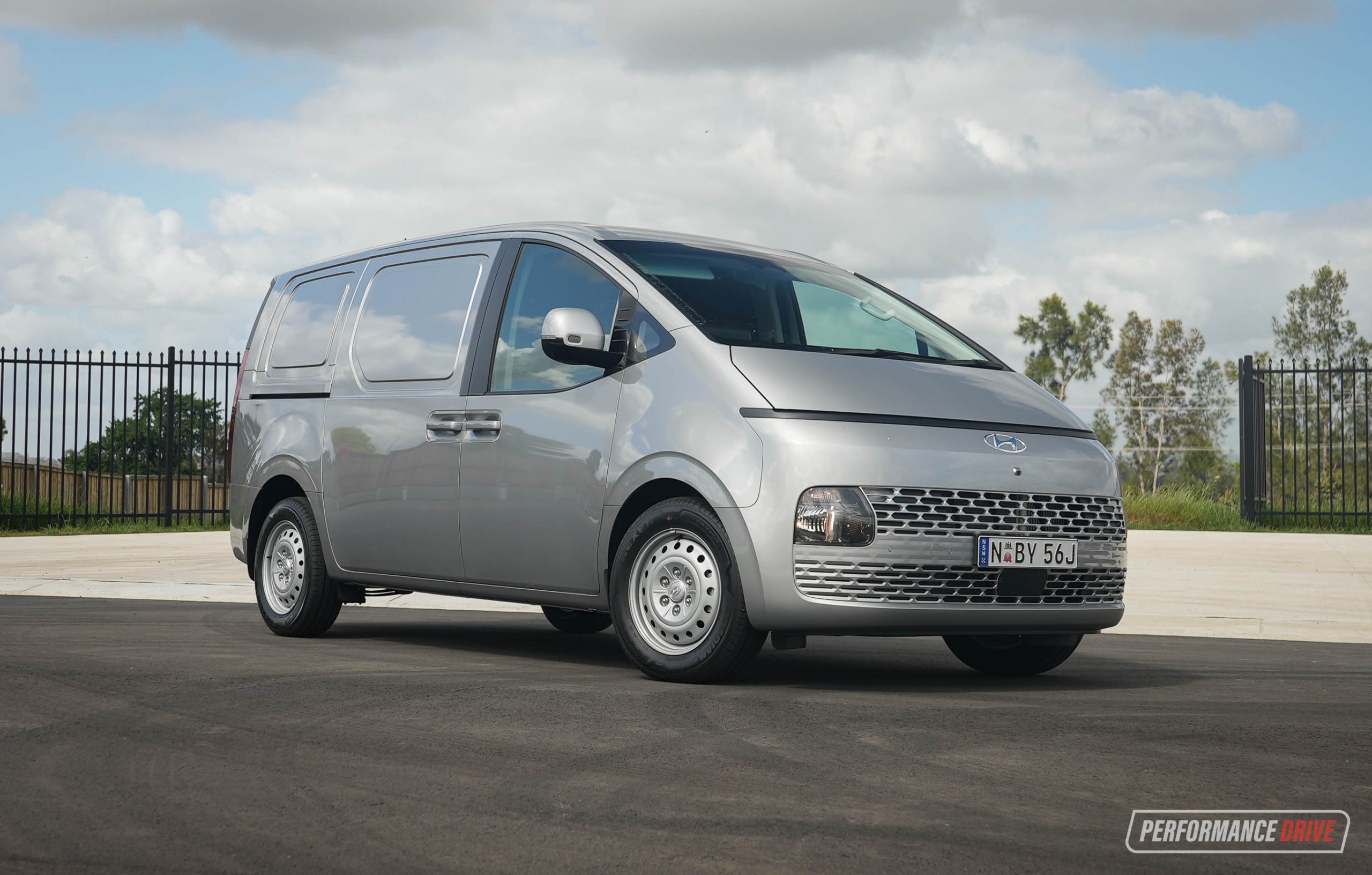 If Robocop had a career change and became an electrician, we reckon he’d opt for this as his work car. Welcome to the first all-new Hyundai iLoad in over 13 years. It’s not actually called the iLoad any more. Instead, it adopts the name Staria-Load, derived from the new Staria people-mover. 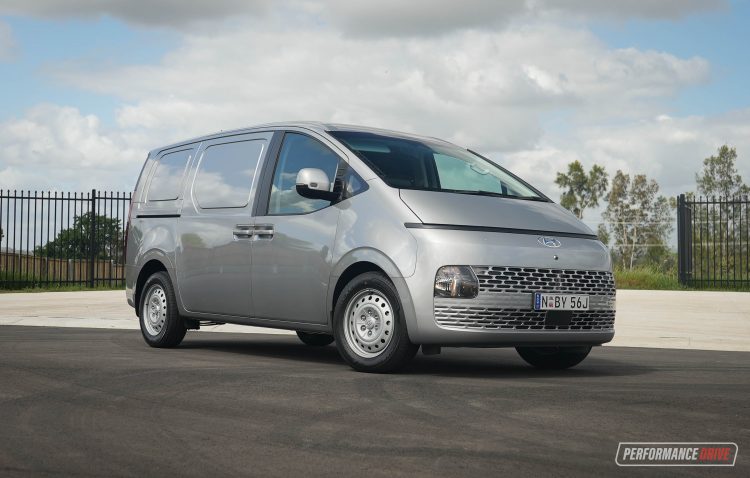 Here we’re testing the two-seat version with the single liftback tailgate. Hyundai also offers a five-seat version, and you can go for twin-split rear barn doors at the back if you prefer. Just the one trim grade is available.

Prices start from $45,740 for either rear door styles, with the five-seat crew cab kicking off from $48,240. You can also make your preference on rear doors with the crew layout at no extra cost. (Prices exclude on-road costs). 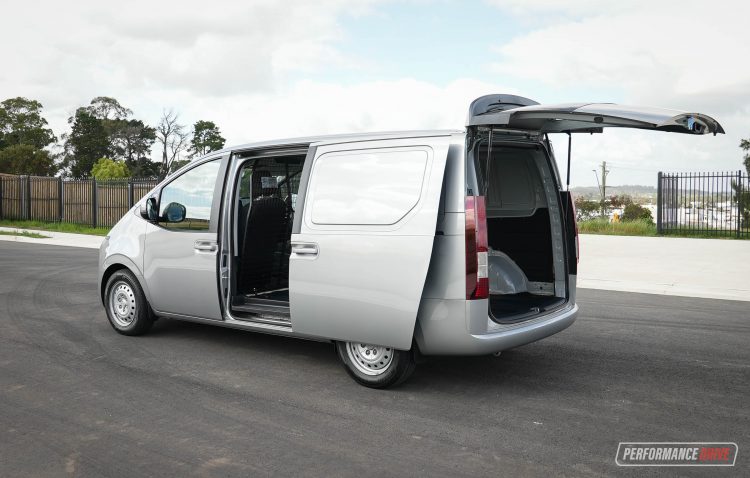 It’s a bit disappointing Hyundai has not fit the full-width daytime running light across the front end for full Robocop effect, like on the regular Staria. But we guess, for commercial applications, it’s probably just an extra cost to worry about if it gets damaged. Hyundai has obviously tried hard to bring across those cool pixel-like LED taillights from the regular Staria as well. But these are just regular bulbs, in a similar grid pattern.

Inside, you can tell Hyundai has taken in a lot of feedback from drivers who rely on these vans for work. There are loads of little and large storage areas around, and it doesn’t skimp on technology or convenience. For example, you get a wireless phone charger as standard. We all know how annoying it can be when you forget a charging cable, especially on important jobs. So this is a great move. 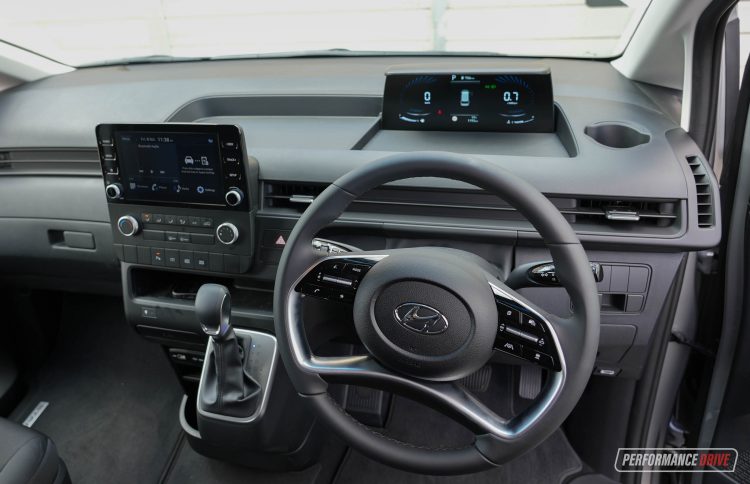 There’s also an 8.0-inch touch-screen on the dash, with wireless Android Auto and Apple CarPlay, and even a class-first four-camera surround-view parking system as standard (only on the liftback). There’s another digital screen for the gauge cluster complete with a glare-shade, with the middle section providing real-time readouts for tyre pressures, trip info, and settings for the active safety systems.

Yet more storage has been tucked away in the ceiling, with two large trays, and there are multiple, almost hidden pockets in the doors. Further enhancing its long-hours-behind-the-wheel appeal is the driving position, with nice and supportive seats. Although, we would have liked a bit more steering column adjustment to pinpoint an ideal position. 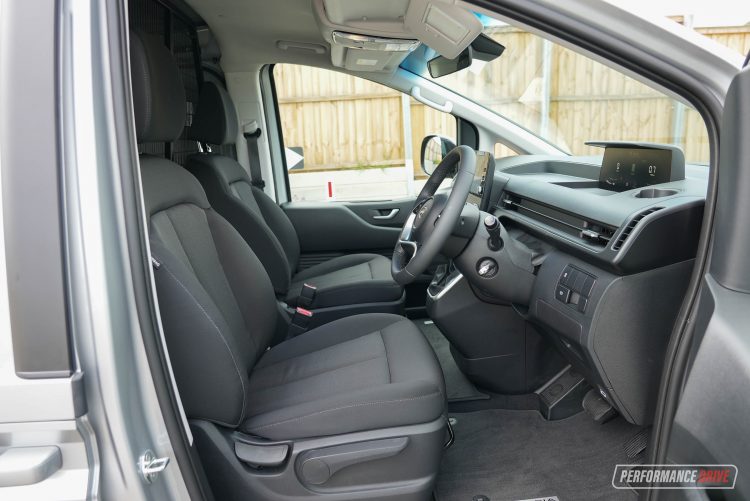 In the back you’ve got a huge cargo area. The floor length is just over 2.6 metres (2607mm), making it 77mm longer than the equivalent Toyota Hiace  – Hyundai says you can fit three euro pallets in here. The ceiling height (1436mm) is also around 100mm higher than the Toyota, however, the HiAce is about 80mm wider (Staria-Load load width 1640mm).

Scattered across the floor you’ll see various tie-down points, and there’s a light at the back. In our opinion, the side door step seems to be a bit higher than the previous model. Which means you do have to get those legs working a little harder. If you do go for the single liftback tailgate, you do need to be careful of the protruding rear spoiler. 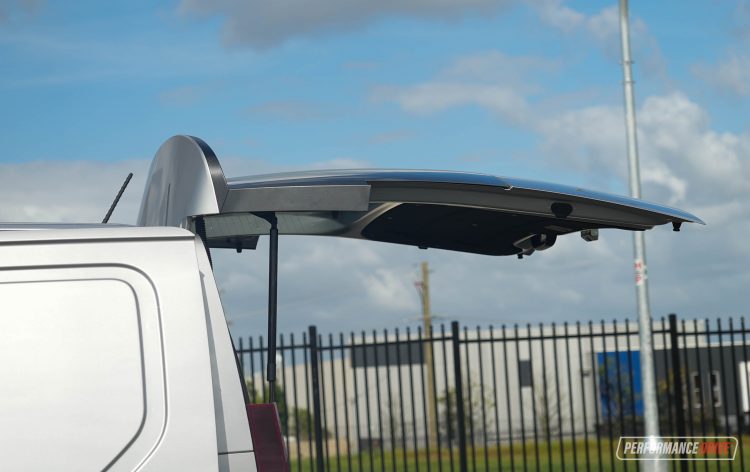 A big change underneath is a switch from rear-wheel drive to front-wheel drive. Although this might not seem as heavy-duty, the cargo and towing capacities are up compared with the equivalent iLoad. The braked towing rating, in particular, is up 1000kg, to 2500kg.

In terms of safety tech, this has everything. It comes standard with seven airbags (including new centre airbag), blind-spot warning and collision avoidance, lane keep assist, autonomous emergency braking with pedestrian and cyclist detection, speed limit assist with sign recognition, adaptive cruise control, and safe exit warning, to name some. ANCAP hasn’t yet tested the new model but we feel there is a five-star rating in it. 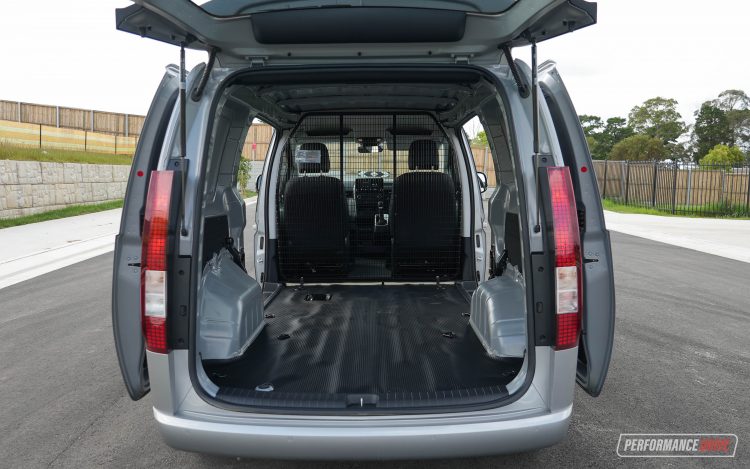 Under that short and stubby bonnet is a revised version of the outgoing (and quite old) 2.2 turbo-diesel four-cylinder. Power is up by 5kW, to 130kW, but torque is down 11Nm, to 430Nm. Matched up to this is an eight-speed auto transmission as standard. This proves to be a winning combo as the new model is a lot more fuel efficient and a lot quicker than the predecessor.

Fuel economy drops from 8.8L/100km to just 7.0L/100km. According to our acceleration timing using a Vbox, the last test we did on an iLoad auto saw the 0-100km/h sprint come up in 11.42 seconds. Now, the Staria-Load crosses the line in a surprisingly brisk 9.41 seconds.

Now obviously we’re testing this unladen, so figures are going to be different in the real world when loaded up. However, the main thing we’re highlighting here is the vast improvement and evolution over the old model. 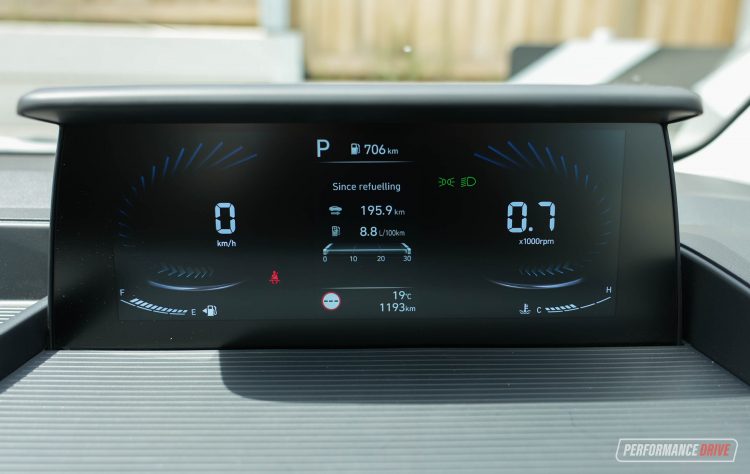 With a 75-litre fuel tank and the official average consumption of 7.0L/100km, the theoretical average range is an impressive 1071km. That’s a big step up from the equivalent auto iLoad, which offered a theoretical range of 852km. In other words, now you’ll be able to go further between jobs before having to fill up.

Vans can be a lot of fun to drive when you have nothing in the back. You don’t get this level of visibility in any other car, so you actually feel really connected and integral to the driving experience. Pop your head under the rear end and you’ll find an almost frighteningly basic leaf-spring setup. Nonetheless, it handles most road types quite well. 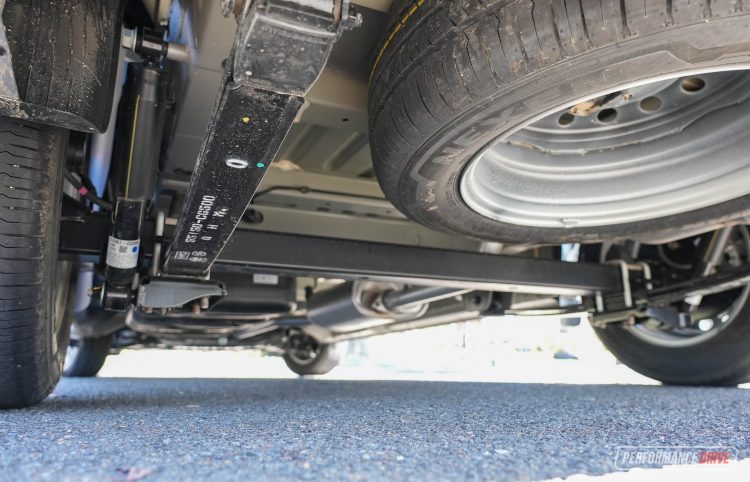 Around town is where it shines, though. It’s right on board with zipping about in a busy lifestyle atmosphere, and keeping up with a day’s work. Parking is easy thanks to the standard surround-view parking cameras, and you only need to glance over the side window sill to see where your wheels are placed on the road.

Ride comfort is also pretty decent, though, at times it can feel like it needs more suspension compression range. We also think these Nexen tyres, measuring 215/65, are not that great, especially in the wet. In saying that, braking performance is good considering the 1938kg tare weight and those ordinary tyres. We tested the 100-0km/h emergency stop in 41.39 metres. Again, this is a sizeable improvement over the predecessor which also ran 215-section tyres, stopping in 42.91 metres under our tests. 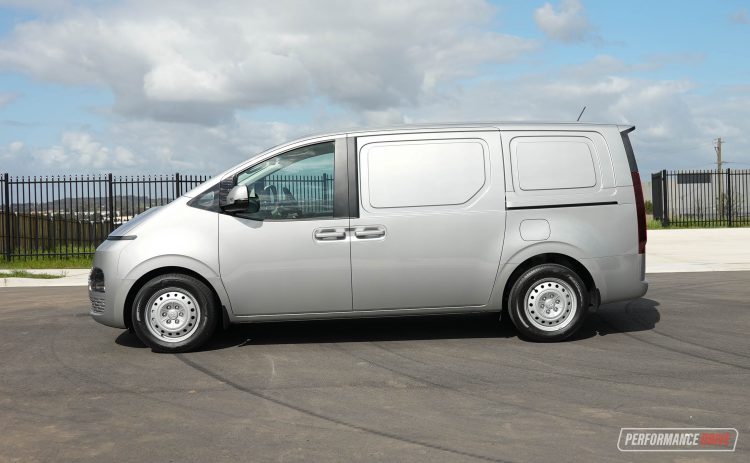 Robocop and Star Trek jokes aside, the 2022 Hyundai Staria-Load is a huge leap forward over the iLoad. But then, so it should be considering the iLoad has been around for over 13 years. The bottom line is this is bigger, a lot more fuel efficient, quicker (not that it really matters), and the interior is significantly more accommodating.

Some reasons to choose the new Staria-Load over the competition include the large cargo area, which trumps many rivals, the smart tech inside which also overshadows many rivals, and the sheer volume of advanced safety tech. Things to consider? Well, the design might be a bit spaced out for some, and front-wheel wheel might be a turnoff in some circumstances.

PROS:
– Huge; bigger inside than iLoad, towing now up to 2500kg
– Lots of first-in-class safety and features
– Fuel economy drops from 8.8 to 7.0L/100km over the predecessor
– Design turns heads

CONS:
– Design turns heads
– Side door steps too high
– Switches to FWD, if that’s a problem