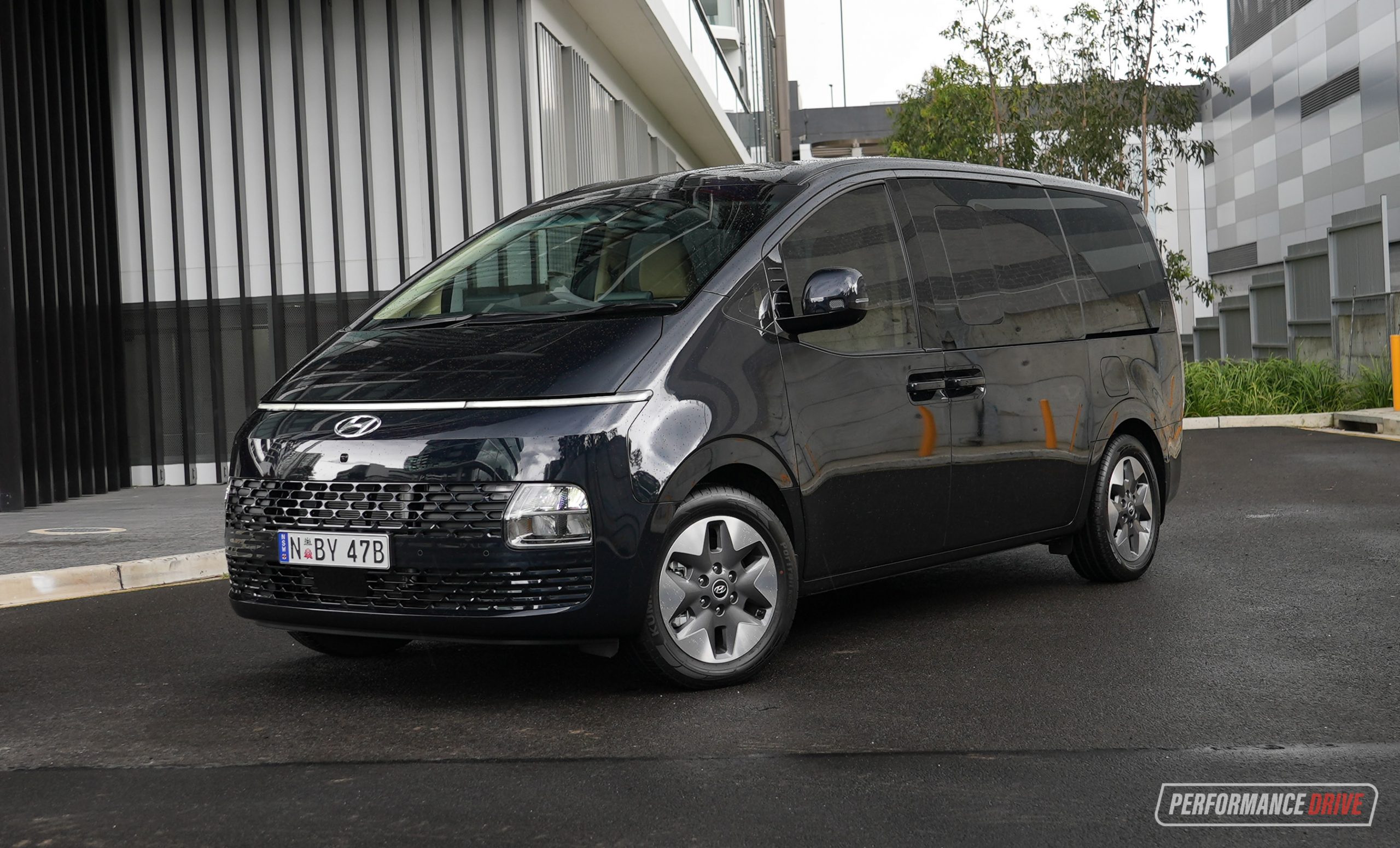 Well, it definitely stands out. And it’s big. This is the all-new Hyundai Staria. It’s designed to take you and the (extended) family on an intergalactic journey through time and segment-restructuring space. 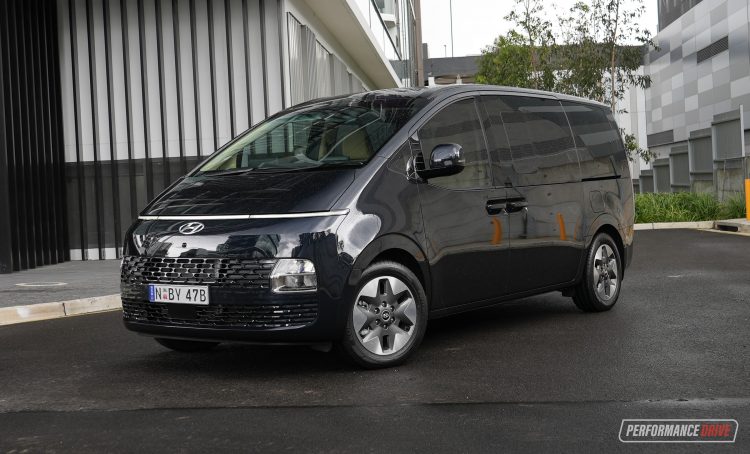 The Staria is the company’s new MPV, replacing the iMax. Soon, there’ll be a Staria Load too, borrowing the same futuristic design, including that Robocop face, but in commercial dress to replace the iLoad.

Did we mention this is big? It’s actually the largest passenger car in the company’s showroom, stretching over 5.2 metres in length. In fact, this is 273mm longer than the Palisade, which is a massive SUV. As you might have expected, the Staria easily accommodates three rows of passengers, with eight separate seats.

Three trim grades are available, from Staria (no badge), Elite, to Highlander. Here we’re checking out the flagship Highlander variant as part of the official Australian media launch. All are available with either a 200kW/331Nm petrol V6 with front-wheel drive, or a 130kW/430Nm 2.2-litre turbo-diesel four-cylinder with all-wheel drive drive. Both feature an eight-speed automatic as standard.

Compared with the iMax, prices have hiked quite a bit. The new Elite is priced around $7000 more than the iMax Elite, although the trim level used to be the flagship – there wasn’t a Highlander. As you would anticipate though, you do get a lot more gear for your money, including digital screens, big leaps forward in safety tech, and improved overall versatility. See below for the lineup (excludes on-road costs): 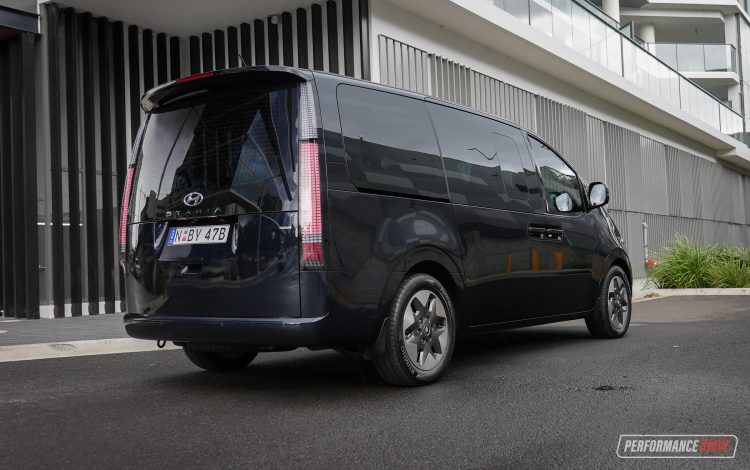 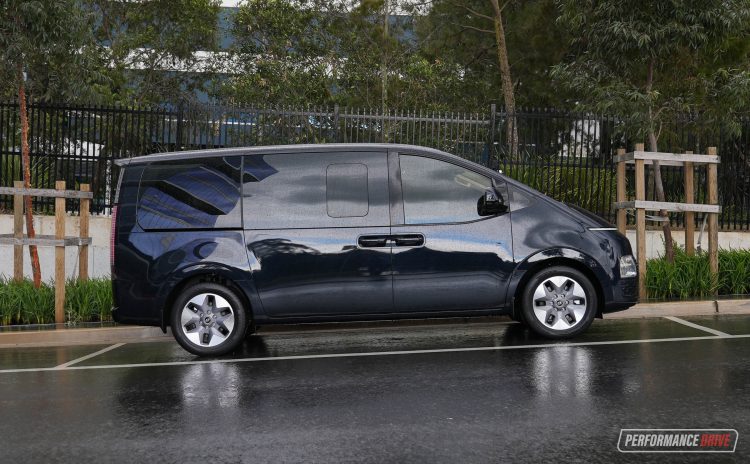 We won’t talk too much about the design as that’s all down to opinions and individual tastes. What is interesting is that it doesn’t really look like any other Hyundai. While many carmakers, including the premium brands from Germany, tend to keep all of their vehicles in a uniform design, Hyundai does not follow that trend.

This looks like a spaceship that was inspired by Robocop’s head. If a company such as Tesla came up with this, its fans would go nuts and applaud the hell out of it. But we get the feeling the Staria will stir a mix of positives and negatives from critics and iMax customers. We think it looks good. It’s very futuristic and unique, which will help it stand out in what has always been regarded a fairly boring market segment, while the smoothed-over panels give it a cool, stealthy look. Especially from the back. Matching the quirky and futuristic body is a set of cute 18-inch alloy wheels. Impressively, these are wrapped in 235 tyres, up from 215s on the outgoing iMax. 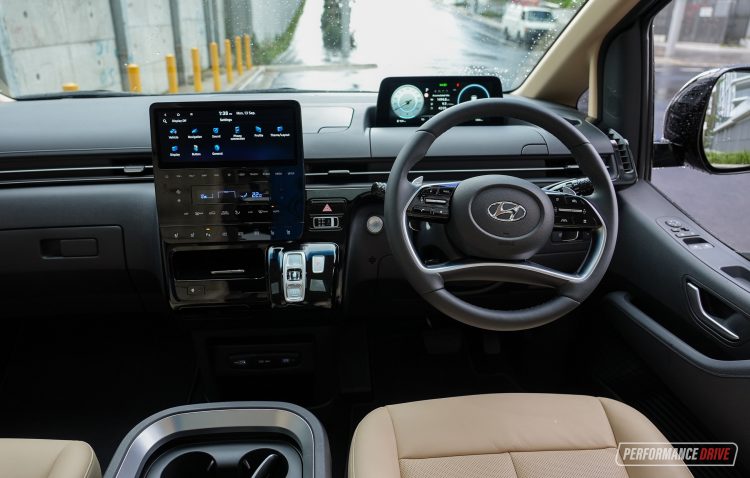 Inside, this is a huge leap forward compared with the aged iMax. There’s a big central panel housing a 10.25-inch touch-screen, with flush buttons on the housing that make it all seem much larger. Some of the functions are hidden in there, such as the drive modes. But obviously with extended ownership you’d get used to where everything is pretty quick.

As a first for the segment the Staria offers a wireless phone charger pad, just below that main housing, and there’s a bunch of cable ports down below. One thing you’ll never struggle to find is storage. There are pockets, big and small, sprouting out and hidden all over the place. Twin cup holders are featured in the front, with an extra one for the driver situated atop the dash near the A-pillar. 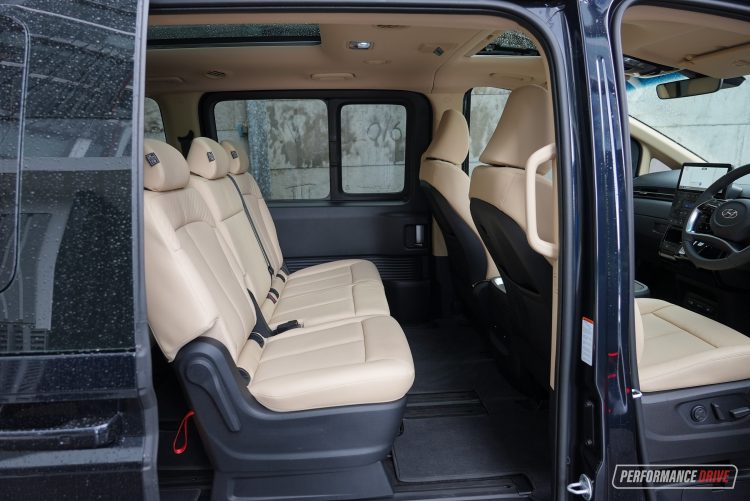 Of course, visibility is outstanding through the front, like most vans, with very low window sills on the doors allowing you to peer down over other motorists. It’s like an SUV in that respect. There’s also a segment-first rear passenger camera system so you can keep an eye on the kiddies, and a segment-first fully digital 10.25-inch gauge cluster. In our opinion, the gauge screen does make the cabin look clean and clutter-free, but it also seems a bit cheap and basic just having a screen plonked on top there. Even some future-inspired shrouding could help.

Rear seat accommodation is absolutely excellent, with a sliding middle row providing more than enough legroom. There’s also climate vents in the ceiling, charging ports down below, cup holders, sliding side windows, and pull-up blinds in the Highlander for both rear rows. Headroom is not going to be an issue unless you’re a giant cyborg. 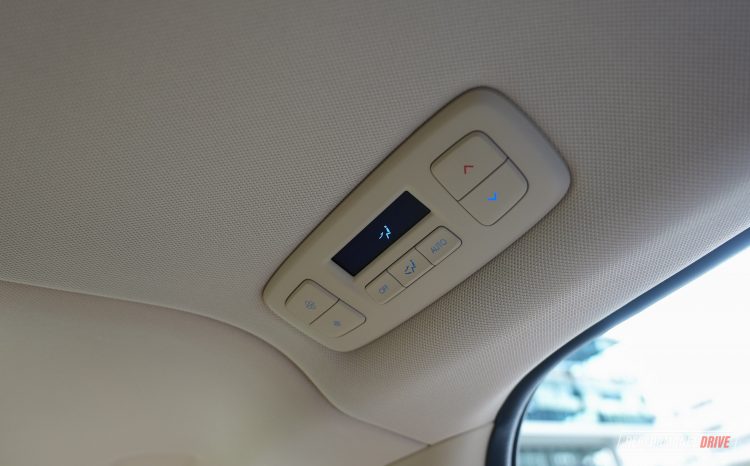 Accessing the third row is pretty easy thanks to the sliding seat mechanism. And there is plenty of legroom back here too. Passengers also get their own cup holders and climate vents, with climate controls from the middle row. It should be noted that this is a genuine eight-seater, offering far more passenger space than any seven-seat SUV on the market right now.

Despite the impressive rear seat legroom, it’s surprising to see such a big boot at the back. With all seats up you have 831 litres to utilise, or 1303L with the third row folded down. Hyundai hasn’t mention a volume figure for the two rear rows folded down, but let’s just assume it is going to be enough for whatever you want to do. This is where that body length really helps. A full-size spare wheel is mounted under the floor, on the outside. 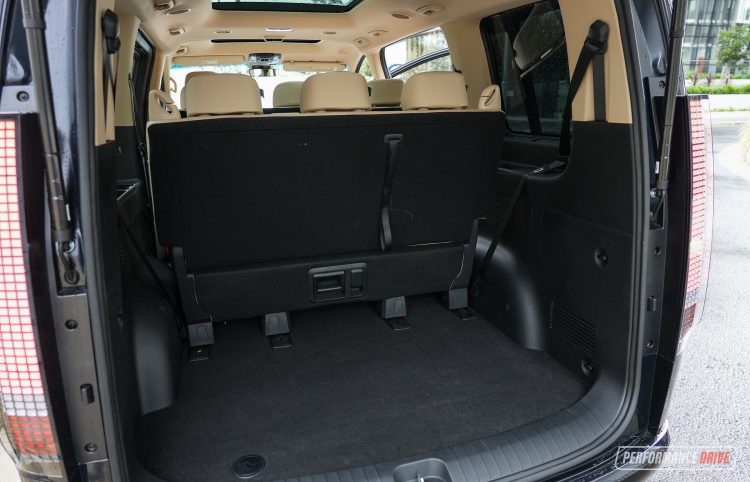 With a bus-like footprint on the road, driving it can take some getting used to, especially in tighter situations. It only just fits into a typical car park, for instance, and reverse parking can be tricky. This Highlander does come with a surround-view camera system though which definitely helps. And since you know the panels and corners of the car drop straight down, you can be confident in knowing where the vehicle ends.

While the platform has fundamentally changed from rear-wheel drive to front-wheel drive (now the N3 platform, similar to the new Santa Fe/Kia Sorento), going for the diesel means you get all-wheel drive as standard in Australia. This helps to improve safety and stability. It also adds an all-new dimension to the vehicle’s capability and skillset. Now you can take the family for a trip to the snow with confidence, for example, or even head out to that remote camping spot on the dirt. 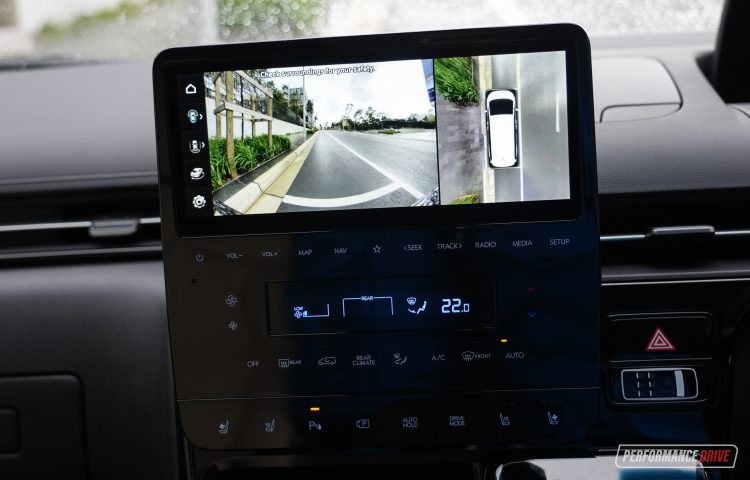 On the open road the Staria feels quite light and nippy through the steering, and the ride seems well suited to Australian roads. Hyundai’s local division did run a series of tests on this model but it did not make any fundamental changes for the Australian specification. Obviously no changes were needed.

Push it a bit harder in the bends and the 2271kg tare mass starts to become apparent. There’s hardly any body roll, but it, understandably, doesn’t really like changing directions quickly between left and right switchbacks. You need to allow for a few moments for the outfit to catch up before it’s ready to jump into the next bend. This is at an acceptable level though we feel, for this style of vehicle. 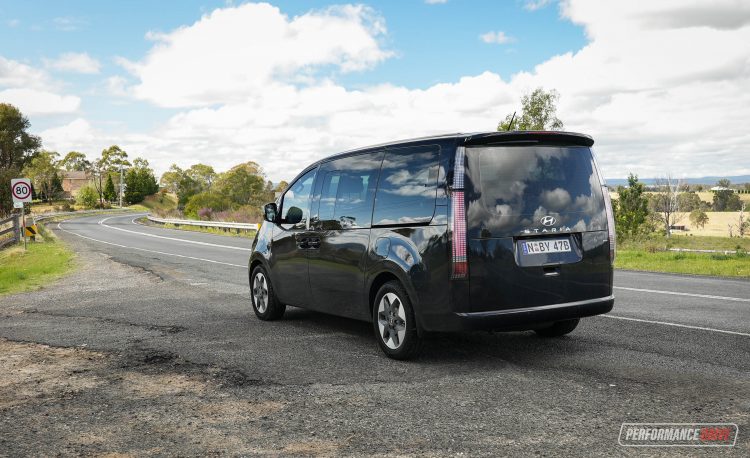 Under the short and stubby bonnet is the company’s older 2.2-litre turbo-diesel R series engine. It’s disappointing the newer Smartstream series is not included here, which offers up to 154kW and 442Nm in other applications. Yes, we know, power isn’t everything. But emissions and efficiency are very important.

The official fuel consumption average for this variant is 8.2L/100km, and during our four days behind the wheel (over a distance of roughly 450km) we returned an average of 9.2L/100km. These figures aren’t exactly terrifying, especially considering the Staria’s size and weight, and eight-person capability – it’s almost a bus – but we can’t help but wonder how much lower these figures could be. 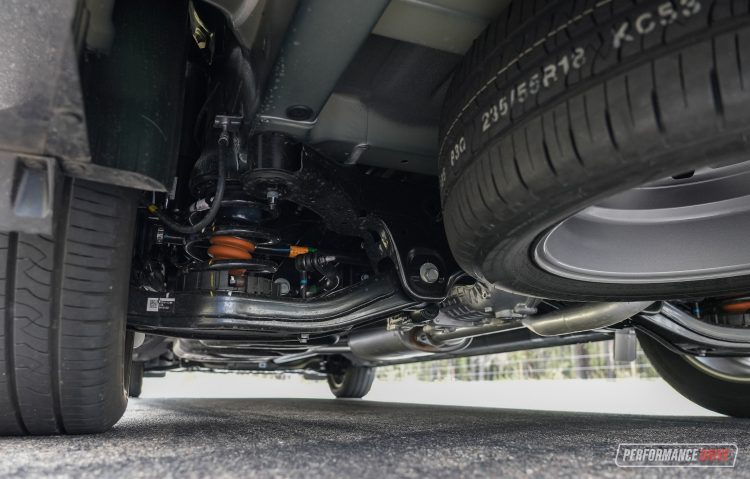 Hyundai is planning a hydrogen fuel-cell option for the Staria, which will debut some time in 2023. However, the Smartstream engine could have been a quick-fix in the meantime. For example, the 2.2 turbo-diesel featured in the current Genesis G80 offers an official consumption of just 6.6L/100km.

Granted, that G80 is not all-wheel drive and has a tare weight of 1899kg compared with this 2271kg butterball. But there’s no doubt the emissions in particular could be lower here with the newer unit. The Staria is rated at 218g/km compared with just 173g/km in that G80 specification just mentioned. And remember, that’s with more power and torque.

Regardless of this engine’s credibility, performance isn’t as dismal as you might think. We recorded a best 0-100km/h time of 11.47 seconds with the Vbox, and that’s pretty similar to many dual-cab 4×4 utes that are all the craze at the moment. The low-speed pick-up and response is good for around town, and, in general, you’ll rarely find yourself calling for more grunt in regular conditions.

It’ll get up to 60km/h with relative ease and without seeming like you’re constantly whipping its behind. That’s thanks to peak torque being available across a low 1500-2500rpm. Returning to that Smartstream unit in the G80, its peak torque is spread a bit higher, from 1750-2750rpm.

Hyundai has taken ages to renew the iMax. On first impressions, we can see why. This is a revolutionary shift in not just design but also versatility, safety, and technology. The Staria has a completely new job description and it fulfils almost every task it sets out to complete.

Our only real concerns are the weight and how it impacts the handling and fuel economy, and the fact it uses a superseded diesel engine. The somewhat controversial design is probably going to divide opinions too – although we really like it.