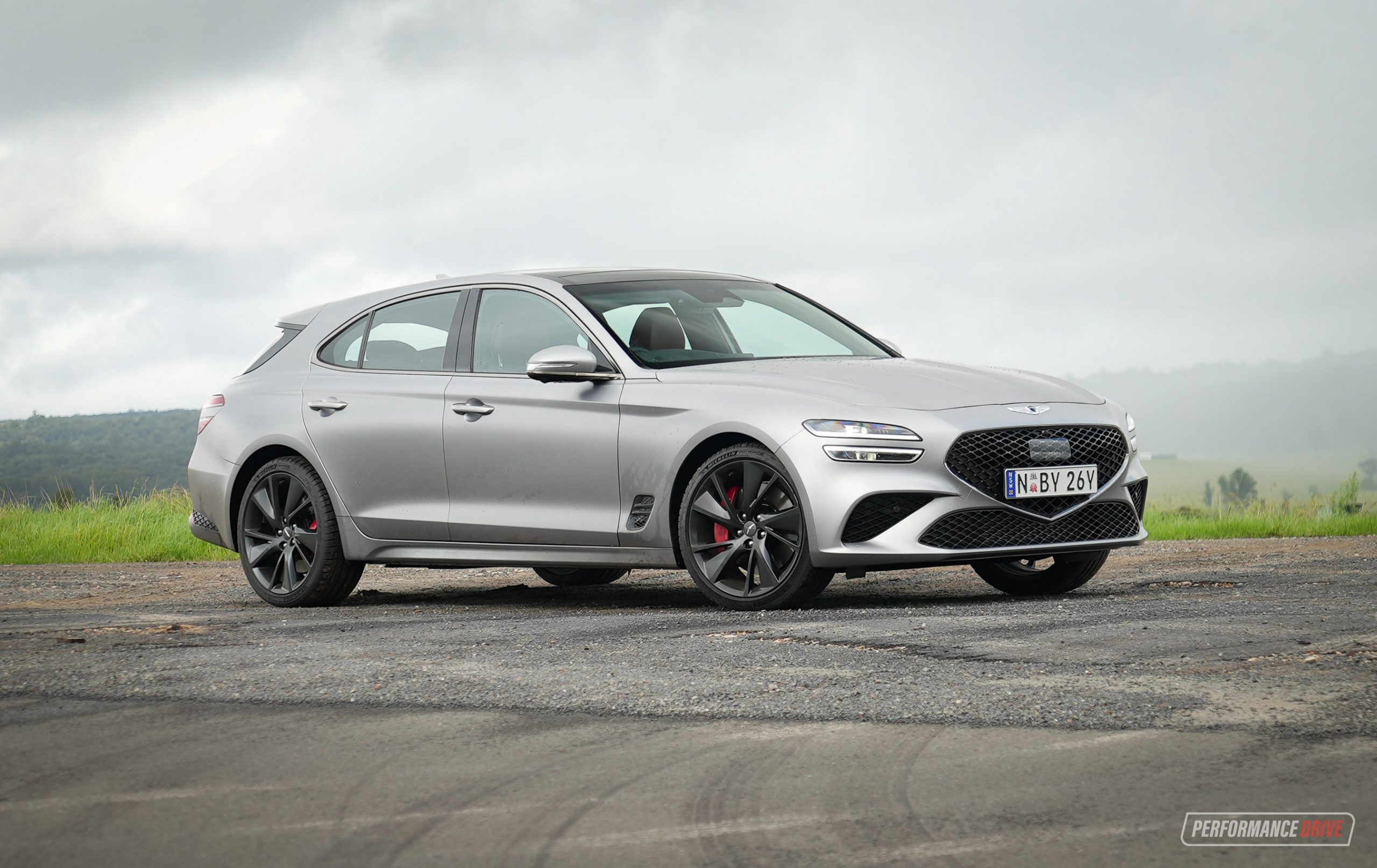 Despite the growing popularity of SUVs there is still something very cool about a station wagon. Especially a stunner like this. It’s the new Genesis G70 Shooting Brake, based on the latest G70 sedan. 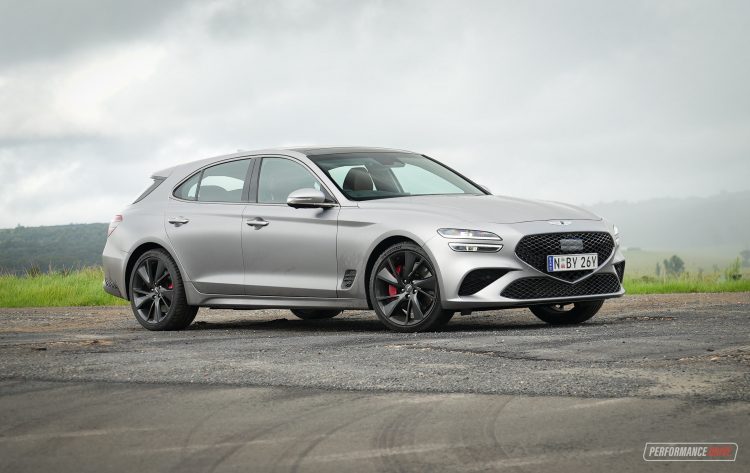 It is strange that station wagons are not as popular as SUVs even though they are, in essence, the same thing only better-looking (in our opinion), more fun to drive, and often more fuel efficient. Wagons are usually cheaper than their SUV counterpart, too. So what’s the go? We’re not entirely sure. We guess fashion and trends always overpower logic and rationale.

Just one variant of the G70 Shooting Brake (wagon) is on sale in Australia, featuring a 2.0-litre turbo-petrol four-cylinder with rear-wheel drive. Of course it would have been nice to have the twin-turbo V6 option as well, as offered in the sedan, but beggars can’t be choosers. After all, it is amazing that Australia receives this model at all as we usually miss out on niche stuff.

Prices start from $79,000, and buyers can opt for a Sport Line pack (as tested here) for no extra cost. That might sound like a lot of money but stack it up against some of the popular German contenders and you’ll see this is actually very good value. Particularly with this level of standard kit.

However, it is, rather strangely, a lot more expensive than the equivalent and newer GV70 SUV base model which retails from $66,400. And it offers more boot space and comes with the company’s latest 2.5-litre turbo-petrol engine, developing 224kW, over this older 2.0-litre unit that generates 179kW. 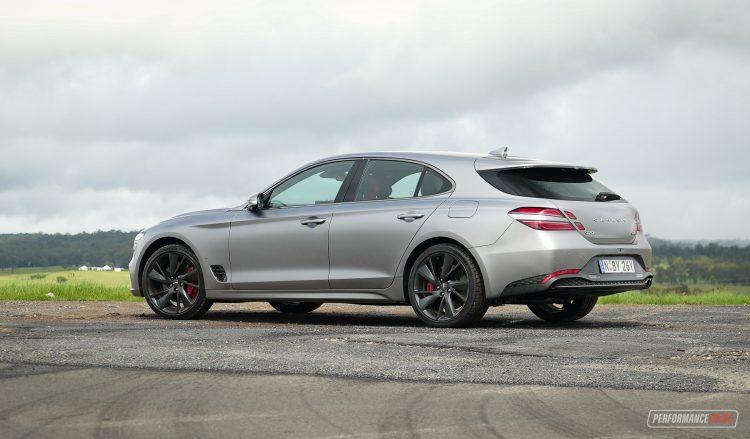 Inside, you’ll be blown away by the sheer level of standard features. This comes with everything. A nice big touch-screen, digital gauge cluster with 3D display options, a 15-speaker sound system, premium Nappa leather, with quilted/diamond stitching for the Sport Line pack, and lots of thoughtful initiatives that support convenience and practicality.

Passenger space is pretty good in the front, with an intimate driving position helped by supportive sports seats, a lovely three-spoke steering wheel, and a wide range of power adjustment for both. There are a couple of conveniently-positioned cup holders in the centre console (on the passenger side, thankfully), a decent centre box and arm rest, and three different phone charging options in the front including a wireless pad, USB and 12V socket. 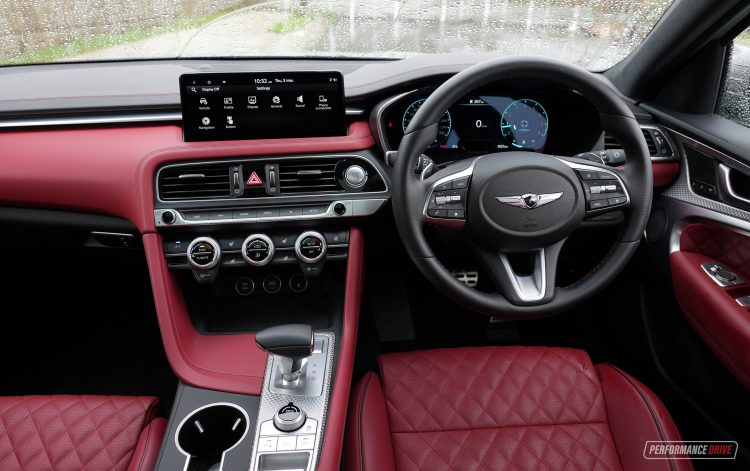 Most controls are ergonomically positioned, and we like the separate panel on the dash for the climate controls as opposed to grouping them all together within the touch-screen, like some modern trends. There’s also quick navigation buttons for the touch-screen, so you can jump straight into media, maps, or the setup, for example, before actually touching the screen.

We know a lot of carmakers now are combining all systems into the screen, but we think it’s important to have some external buttons for safety reasons. For example, you end up spending less time looking at the screen to find a top-tier menu before even diving into your preferred area.

Passenger space is about average in the back. The driveline hump seems very large, which does reduce middle-seat comfort quite a bit compared with some rivals. Climate vents, cup holders, and a charging port are all standard kit though. The seat is wrapped in the same leather and pattern as the front, and the cushion itself is soft enough for long-distance touring. We also like the classy door trims with metallic and leather highlights, just like the front. 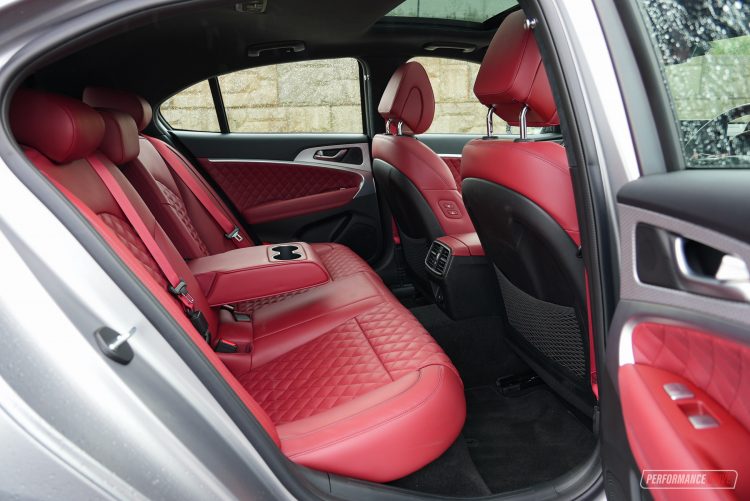 Boot space measures in at 465 litres. That’s a lot more than the 330 litres you get in the sedan. However, if you need more room the GV70 SUV does present 542 litres. The boot height is probably the main limitation here, making it difficult to load in bulky items such as small bits of furniture, compared with the taller GV70. Under the floor is a space-saver spare wheel, and there are pull-tabs in the wall to fold down the rear seats from the back, as well as a 12V socket.

As mentioned, the sole variant is available with a no-cost optional Sport Line trim pack. It gives the Shooting Brake a stealthy performance theme, with shadow chrome highlights for the grille and window surrounds, and a set of gunmetal grey 19-inch sport alloy wheels. This test car also shows off the awesome matt Makalu grey paint finish, which is a $2000 option. 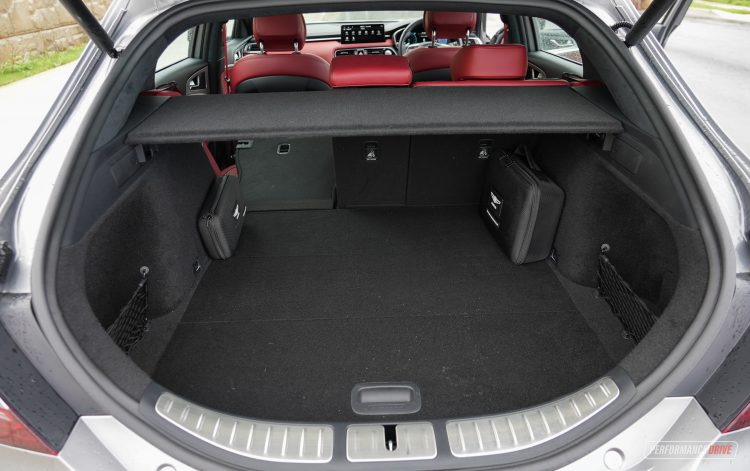 Being rear-wheel drive means it is relatively light in weight compared with an equivalent SUV with all-wheel drive. Perhaps more importantly, it also affords fun driving dynamics. And to compliment that Genesis provides a limited-slip differential as standard just to make sure power is distributed evenly while also helping to pivot the car around corners. Compared with the GV70 2.5T RWD, which weighs 1908kg, this 1693kg wagon feels so much lighter on its feet.

In the corners is where the car really shines. It is way more engaging and more capable than the SUV alternatives. The centre of gravity feels (and probably is) really low, so you get that darty go-kart feeling. It pounces into corners with huge front end grip, too. This is helped by the outstanding Michelin Pilot Sport 4 tyres, measuring 225/40 on the front and 255/35 on the back. Seriously, the amount of grip on offer is astounding. Even in the wet. We pushed quite hard around some corners, which we know are usually very slippery in the wet, and this thing did not budge. 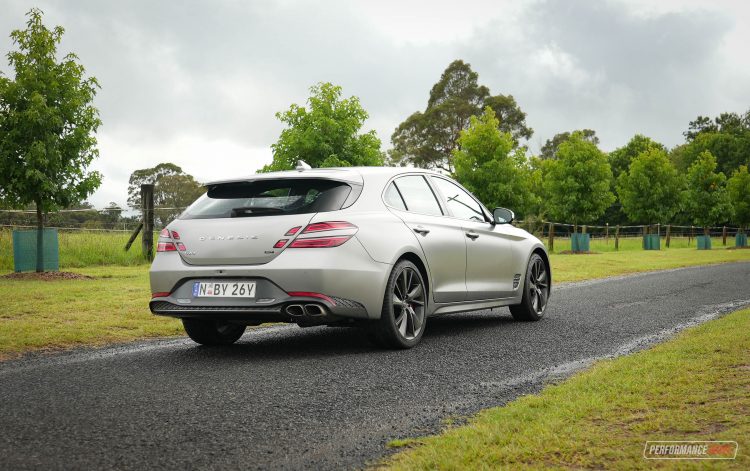 In that sense, the handling is very sure-footed which is important to note if you think SUVs are generally safer and more stable on the road. The G70 also cruises nicely on the highway, with that reassuring sense of solidity and straight-line stability that you often get in a premium executive sedan. The eight-speed auto features well-spaced gear ratios so the engine merely idles at freeway speeds, helping to conserve fuel.

Speaking of fuel, the official average consumption rate is 9.1/100km, and we averaged 10.4L/100km during our week over a distance of about 580km. That’s not all that frugal for a 2.0-litre engine, the official rating. For example, a BMW M340i, which uses a 3.0-litre turbo inline-six that develops 100kW more than this, and has to feed to AWD, has an official rating of 7.7km/100km. Our suspicions tell us it could be down to the transmission used here. Or at least in part. 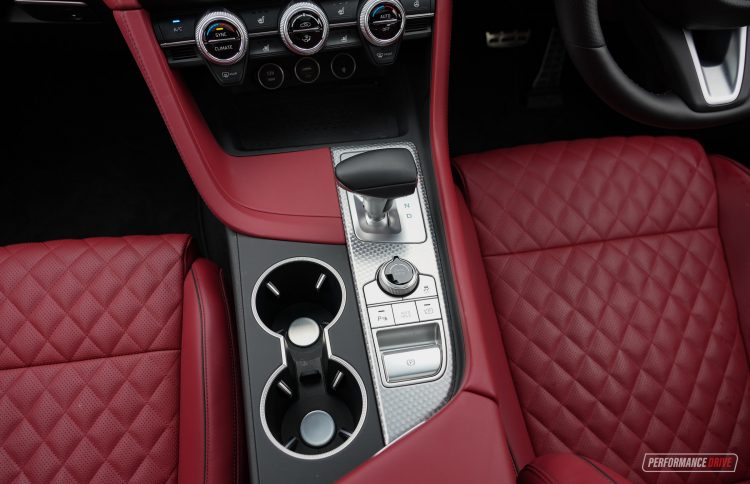 This eight-speed auto is an in-house unit, developed by Hyundai Motor Group and shared with the Kia Stinger. It doesn’t offer a proper manual mode, although there are paddle shifters to play with. Instead, it automatically reverts back to D if you don’t keep playing with the paddles, and it will automatically upshift regardless, at redline. But that’s not our main gripe. The gear shifts are not all that swift compared with some rivals. It also goes into a ‘cool down’ mode pretty quickly after some heated driving. 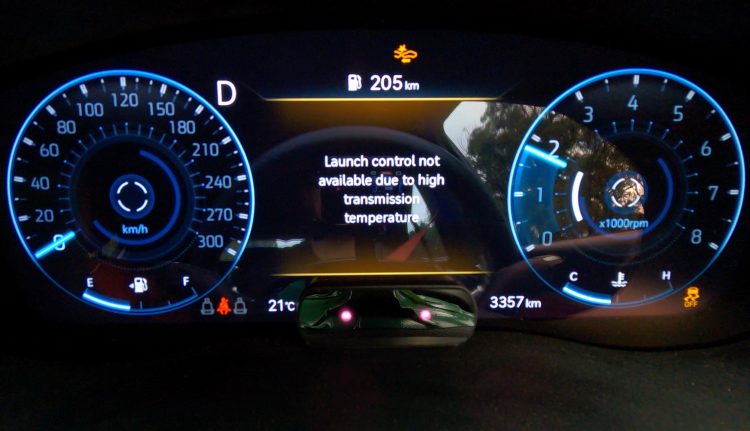 During our 0-100km/h tests using the in-built launch control system – which is basically brake-loading the engine, as you can do with any torque converter auto – the transmission needed a rest after each run. Now, we get it, 0-100 testing does put strain on the powertrain. However, we’ve tested a basic Toyota Corolla in exactly the same way and it did not require a cool-down period after each run. With a more refined transmission that perhaps more efficiently transfers the power to the axle – such as the widely-used ZF 8HP – this could be a quicker and overall more dynamic machine.

In the end we eventually saw a best 0-100 time of 7.64 seconds. That’s over one second slower than what Genesis claims. We tried brake-loading with and without engaging the launch control mode, as well as pure full-throttle off the line, and all with and without traction control enabled – not that there is any issue with traction anyway. The temperature was a mild 22 degrees during testing. Nonetheless, the engine does feel keen to get up to speeds once you’re on the move. Overtaking is not a nervous job as the top-end seems more commendable than off-the-mark acceleration. 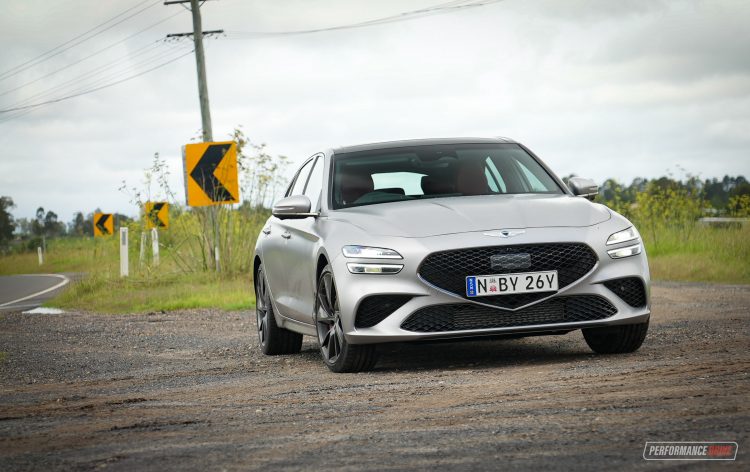 Going the other way, the standard Brembo brakes provide proper head-hurting stopping performance. We clocked 100-0km/h in just 35.78 metres. That’s a quality distance, even bettering some of the more established European rivals in this segment. And the performance is repeatable. During our harsh mountain road test route we purposely hammered down hard on the brakes leading into corners, more than we needed to, and it just kept digging in.

Overall, we think the balance is excellent. It’s not too quick, so you can explore the rev range without getting into trouble, and it handles wonderfully even in poor conditions. Fuel economy could be better, but having that desirable V6 option would obviously make things worse. Instead, it would be interesting to see the company’s new 2.5 turbo in here, and a more refined auto transmission to top it off. 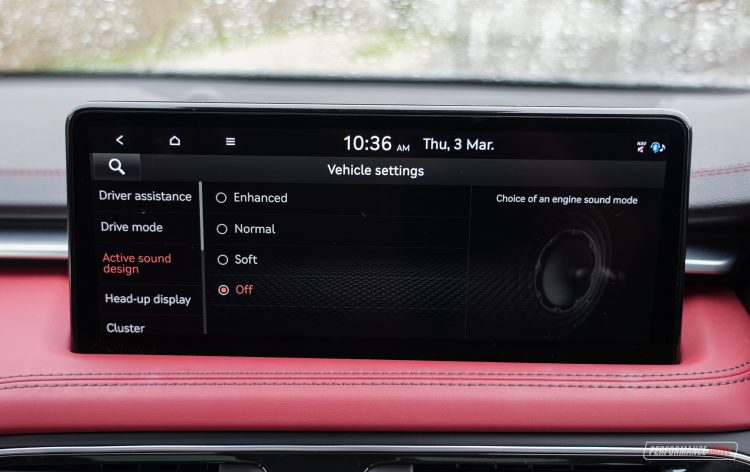 So although the twin-turbo V6 would be a very tempting option, this 2.0T unit does seem to match well with the overall theme and balance of the car. There is less weight over the front end, so it feels nimble, but it also supports spirited cross country touring and uses less fuel than a V6.

Should you consider this over the SUV counterpart? SUVs are definitely on trend at the moment so it is going to be difficult to go against the grain. We would, purely for the added driving enjoyment offered in this. However, resale value is probably going to be sharper in the GV70 simply because more people want an SUV.

There’s also the benefit of more boot space, some off-road ability, and you get the more powerful (and quicker) 2.5 turbo engine. The biggest point to take home though is the fact the equivalent GV70 is actually more affordable. Over $10,000 more affordable.

CONS:
– Price doesn’t stack up against equivalent GV70 SUV; this is over $10k more
– A bit slow, should use the new 2.5 turbo
– Auto transmission lacks sharpness