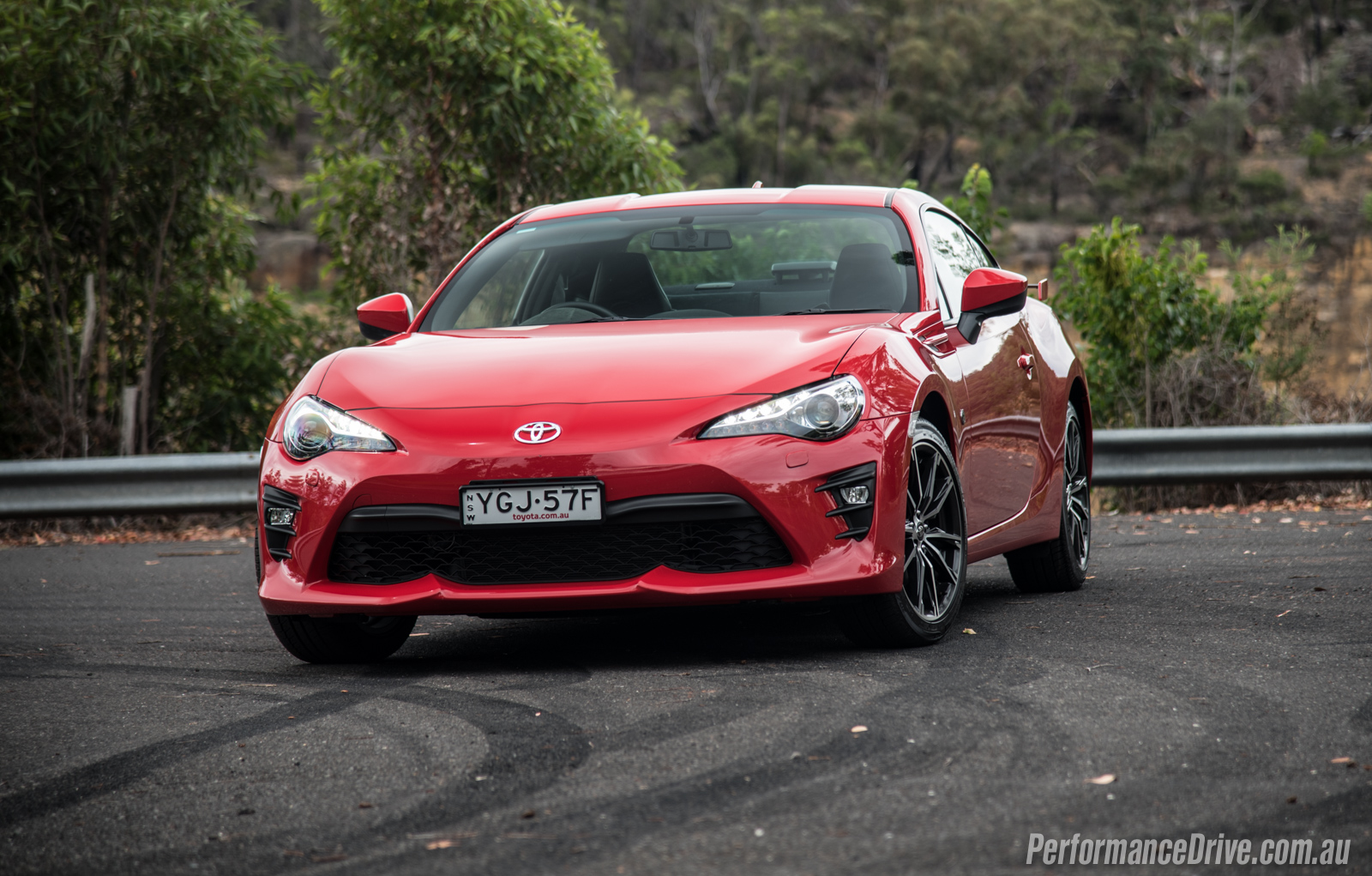 How many times do we have to tell you, the Toyota 86 is the best sports car you can buy for under $50k. Well, it seems not even Toyota believes this, so it made some revisions to the powertrain, tweaked the handling, and updated the interior for 2017. Has it helped? 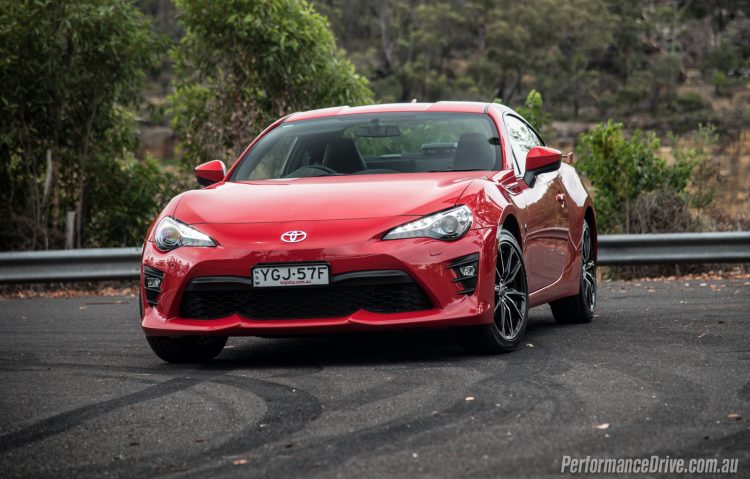 All of the updates are only minor and the engine still isn’t turbocharged like we’ve all been wishing for. However, we think the minor tweaks help to lift its overall appeal and open it up to a larger audience.

Prices start at $30,790 for the base model GT manual and top out at $38,790 for the GTS auto. This means there is a climb of up to $800, in the case of the base model manual. But all-in-all, it remains as one of the most affordable proper sports cars you can get. 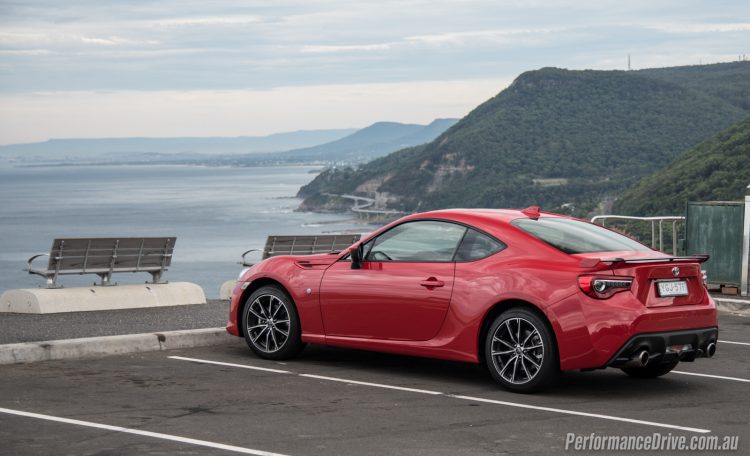 For the interior there’s some soft ‘Grandlux’ suede-like trimmings for the dash and door trims, making it look and feel a bit classier. It also helps to suppress ambient noises better compared with the mostly-plastic decor in the previous model.

Toyota has updated the instrument cluster for the driver as well, wedging in a new LCD display that can show you cool stuff such as the live power and torque curve, and trip information. This is controlled via a little navigation pad on the new, smaller-diameter steering wheel. 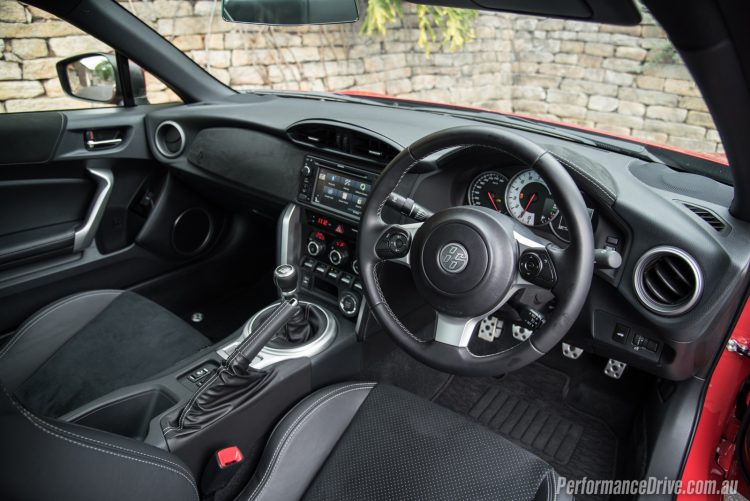 Apart from these updates, everything else inside is carried over from the previous model. Unfortunately that includes the same universal touch-screen infotainment system. It offers plenty, including sat-nav and media apps, but it’s a bit behind the game in terms of menu functionality and graphics. The small buttons can be a bit fiddly to operate, especially on the go. The 86’s sister car, the BRZ, uses a superior Subaru system.

Boot space is rated at a minuscule 237 litres, and rear seat space is really only suitable for a helmet or an overnight bag. Front seat space is more than acceptable, with enough room to move about and get comfortable. It is a long and low seating position remember, in sports car tradition, so you’ll have to get used to working those thighs getting in and out.

As for the exterior, only minor changes are made for the 2017 facelfit. There’s a new front bumper bar with twin bumps that protrude upward, a larger mouth, and new headlights. The taillights are also new, and in the case of this GTS an aluminium wing in black has been added to the rear deck. It all looks good in our opinion and it seems to be ageing well. We guess it would have been nicer if there were some more obvious design changes to help distinguish the update. 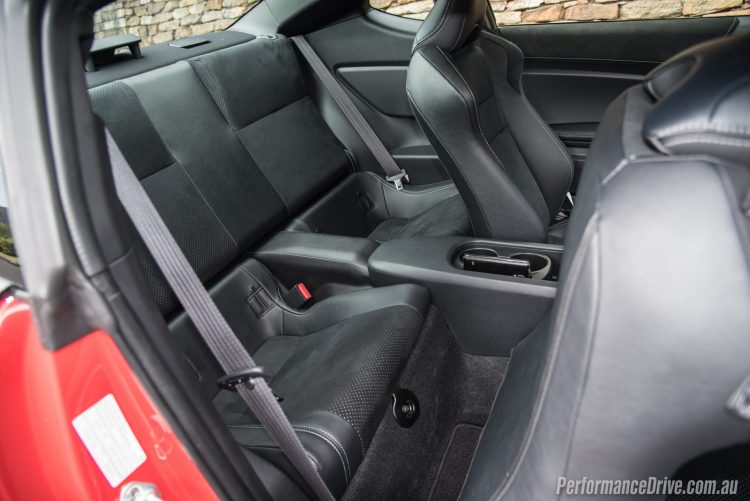 Changes for the drive have made a big difference, both good and bad, depending on what you’re after. The limited-slip differential ratio for the manual swaps from 4.1:1 to 4.3:1, meaning all gears are shorter. First gear only takes a second until it’s ready for second. In fact, you can take off in second going down hills.

This gear ratio change has improved cross country performance quite noticeably though, we think. Because now you can use third or even fourth gear to pull away from corners, whereas before, at low revs, the engine would bog down slightly, urging you to change down and get back into the higher revs. At the other end of the driving spectrum, it’s also a bit nicer to drive around town as now you can pull away from roundabouts in third with little complaint.

Part of this improvement in low-end response comes thanks to revisions to the engine. It’s still a Subaru-sourced 2.0-litre naturally aspirated four-cylinder flat-four, with Toyota direct injection, but thanks to a new aluminium intake manifold replacing the previous plastic setup, new pistons and revised exhaust, outputs now peak at 152kW and 212Nm for the manual transmission models. This is up, albeit only fractionally, from 147kW and 205Nm. Peak power is achieved at 7000rpm (as before), but peak torque spreads from 6400-6800rpm instead of 6400-6600rpm – only a small difference. 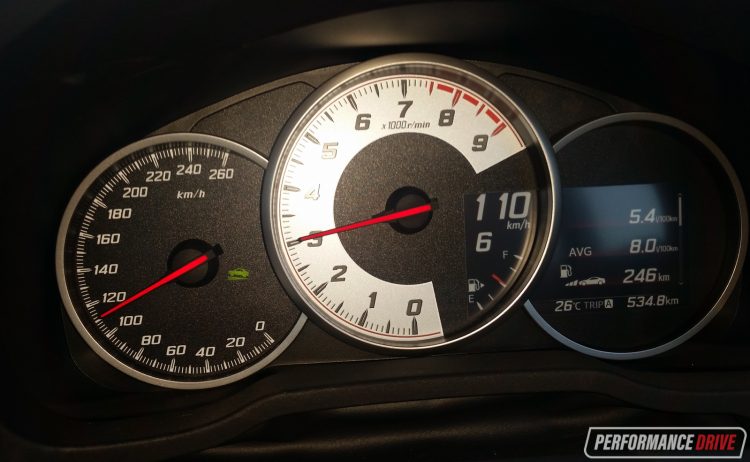 It’s difficult to notice the lift in outputs. The biggest thing you’ll notice is the diff ratio change. We’re guessing the top speed isn’t as high, although it wouldn’t have a problem exceeding 200km/h. Highway revs are a little higher, sapping into cruising comfort a little, with 110km/h requiring exactly 3000rpm. This does impede on fuel economy in the virtual world of lab testing, jumping from 7.8L/100km to 8.4L/100km on the official combined cycle test. However, we found the new setup to return a more respectable average in the real world. Whether this is because of the ability to use third and fourth gear more often or not, we don’t know. During our week the car averaged 7.7L/100km.

Annoyingly, there is still a flat spot in the power delivery. It’s between around 3000rpm and 5000rpm. If you fully open the throttle, while on the go, in this rev range you’ll get not much at all until it swings past 5000rpm. We suspect this might have been put in there on purpose to aid fuel economy on the highway, as this is where the revs sit. If, on the other hand, you give it the full beans from a standing start the flat spot isn’t as evident. It seems to climb straight through it.

Speaking off which, we timed 0-100km/h in the updated BRZ earlier this year and we were a bit skeptical as the VBOX returned figures that were a bit slower than what we’ve been used to in the 86. Sure enough, the updated 86 clocked a similar 7.79-second 0-100km/h sprint, which is down on 7.46 seconds we last tested in the 2016 model, prior to the revised powertrain. We put this solely down to the gearing. It just so happens that certain gear changes are required at different speeds now, effecting the 0-100km/h time. 0-60km/h is also a shade slower, from 3.69 in our last test to 3.79 for this 2017 model. The quarter-mile is pretty much the same, at high-15s (specific times listed above).

As a side note, we found that changing the gear right on the buzzer/shift light, what feels like almost short-shifting, produces the best times as opposed to revving the neck out of it. (We revved the neck out of it in the video below purely for your entertainment, but during timed testing we tried various methods.) 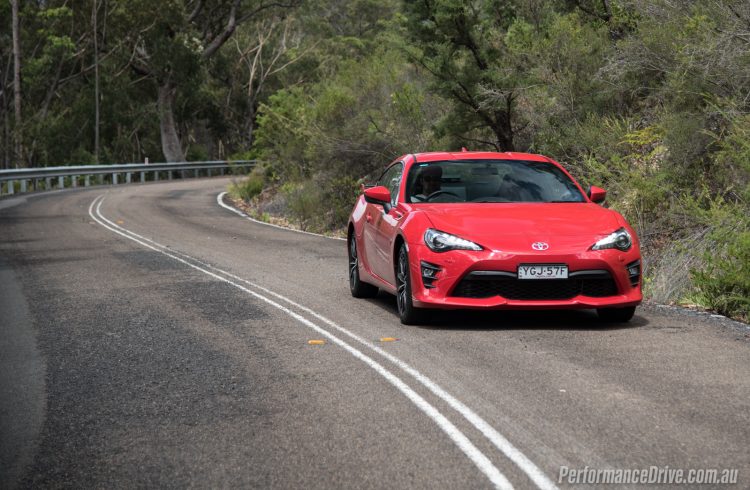 The engine sounds the same. In this writer’s opinion, it’s a hollow noise that sounds like small boat. But, some of the guys in the office think it sounds good. It’s an eventful and enthusiastic soundtrack that makes the drive more exciting, I suppose. A turbocharged engine could help to provide a beefier, fuller note.

Lastly, the handling continues to be sublime. Toyota engineers have tweaked the chassis and suspension, using more spot-welding to increase body rigidity, while the dampers and springs have been retuned with a thicker rear stabiliser added in. The result? The 86 has always been one of the purest and most engaging vehicles in the sports car market, and this definitely continues. It does feel a little more stable when hitting mid-corner bumps at speed, and the tail tends to kick out more progressively than before.

Overall though, you simply need to drive one of these at least once in your life to understand what all the fuss is about. We’d recommend hitting the track if you can, as the car’s true abilities are only seen and appreciated when pushing really hard.

To answer the original question, has the update helped? We must admit the newer interior will bring it in line with some of the more modern competitors, and the increased torque of the engine and diff ratio will appeal to the everyday motorists as well as driving fans. In short though, not really. We think the 86 is the best sports car you can get for under $50k and the update doesn’t really strengthen that claim. It simply still is.