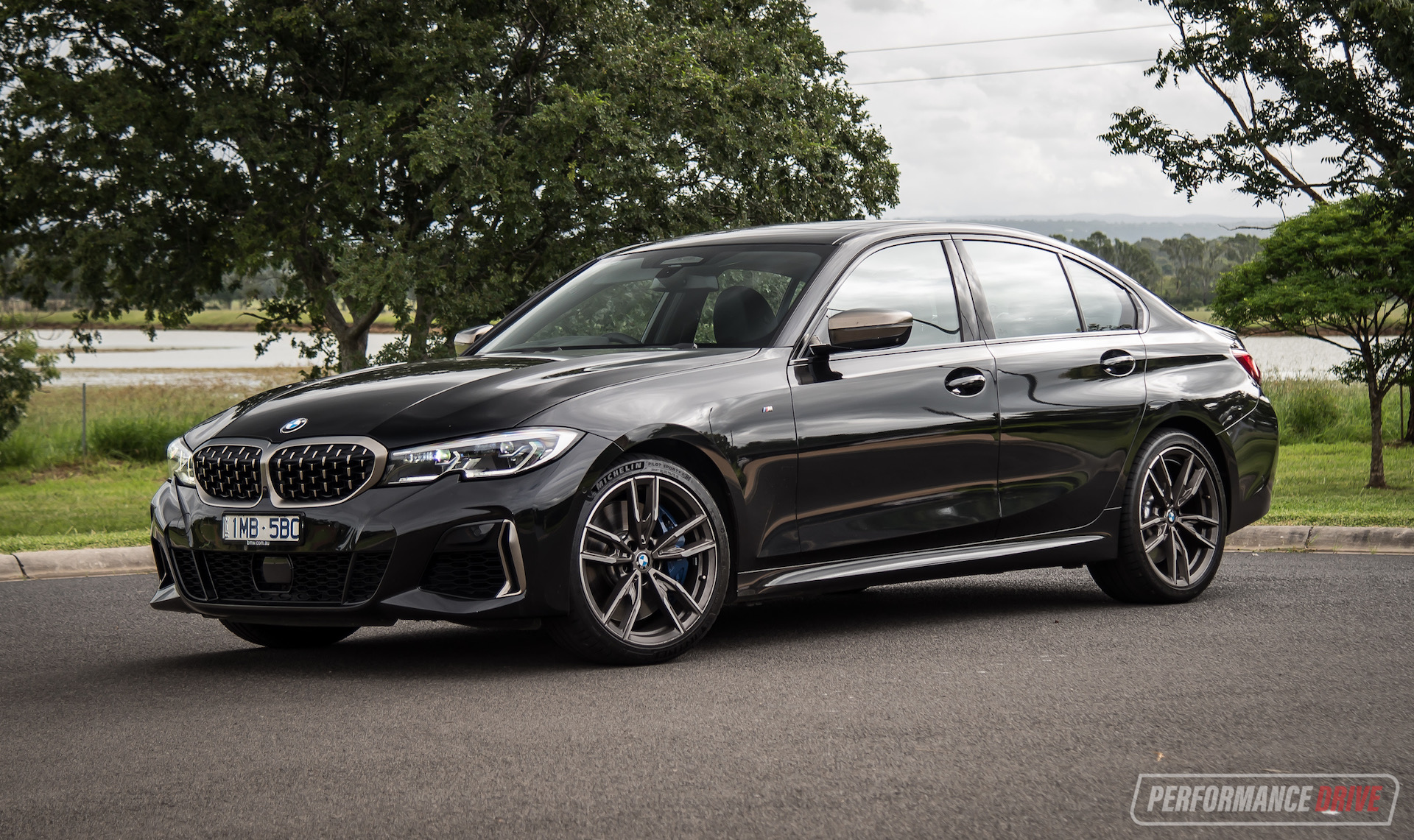 The G20 3 Series has already set new standards in cabin presentation, quality, and yet again raised the bar for overall driving dynamics and sportiness in this class in our opinion. And now the M340i comes along to garnish these traits with a perfectly picked cherry, placing it delicately at the top of the range. Until the new M3 comes along, that is. It’s another project by one of BMW’s confusing sub-brands. Let us give you a quick lecture on how it all works. You have BMW as the core company, and it has its regular model range. Then you have M Sport, which consists mostly of sporty options which can be applied to the regular model lines. Some of these options can be fairly serious, with stuff like adaptive suspension and special multi-piston brakes and so on.

Then you have M Performance, which falls under BMW. It’s like M Sport but turned up a few notches, extending to engine upgrades and further cosmetic and chassis tweaks, resulting in the creation of new variants. Positioned off to the side, albeit owned by BMW, is BMW M GmbH. This is a separate subsidiary which essentially creates its own vehicles, obviously based on existing BMW models. They usually come with their own engines, wheels and suspension, body parts, and other fundamental components which are designed and developed in-house at BMW M.

Now that we’ve cleared that up we can tell you the new M340i xDrive comes from the M Performance sub-brand. That is, it’s not a bespoke model by M but it does go further than the usual M Sport pack you can option on any 3 Series. Not only that, the M340i is the only six-cylinder 3 Series you can currently buy new in Australia, and the only all-wheel drive 3 Series on sale in Australia (xDrive means AWD, in BMW language). There is no more 340i. Before the new M3 comes along, due late this year, the M340i is the flagship 3 Series. BMW has really turned up the pressure on the rivals with the interior and packaging of the G20 3 Series. In M340i form, standing at the top of the tree, it obviously comes with lots of standard features and shows off most of what BMW offers for this market segment. In saying that, inside the M340i does look pretty much exactly the same as many other 3 Series models with the M Sport pack.

You get some lovely M Sport seats in the front with proper side bolsters, and tightly-wrapped leather holding the firm but forgiving cushioning together. Blue stitching helps to add some flair, just like the M Sport pack. Snuggling into the driver’s seat gives you that warm and fuzzy feeling. The environment makes you feel immediately connected and integral to the car. This isn’t a cold and sterile place. Of course, the driving position is spot on as well, which definitely helps. There is plenty of adjustment available from the power seat, and reach-and-rake movement from the steering column. Running through the middle of the cabin is a solid centre console that houses some driving mode switchgear as well as the iDrive control pad. This is all intertwined with a textured metallic trim that BMW calls Tetragon, paired with sections of what feel like genuine, smoothed aluminium. All of this not only feels precisely made and with quality materials, the layout for the controls also seems easy to understand. The buttons are clearly marked with simple text and there are no perplexing symbols or oddly-placed controls that could otherwise confuse the free-flowing functionality.

We feel it is a little disappointing that BMW has gone to a fully digital instrument cluster for the G20, as we still like older-fashioned yet more intricately-detailed mechanical dials. We think there is more to be appreciated with something that physically moves. However, digital clusters are the fashion these days and they do help to establish an instant wow-factor for those experiencing the car for the first time. BMW doesn’t offer that many options for the multimedia interface. It’s a 10.25-inch screen across the 3 Series range, equipped with digital radio, sat-nav, internet accessibility, and heaps of in-built apps and interesting vehicle data and settings (we saw the turbo boost gauge peak at around 1.1bar, if you’re wondering). Apple CarPlay is standard on this specific model and is set to roll out on more and more BMW models very soon. Head-up display, a wireless phone charger pad, and an electric sunroof are all standard on the M34oi xDrive in Australia.

There are some options which might be worth ticking, especially if you love gimmicks and gadgets. You can get gesture control for the screen for $600, so you can wiggle your finger around in the air and direct certain commands like a magician. BMW Drive Recorder is also an interesting one. It’s essentially an in-built dashcam that fully integrates with the iDrive operating system. That’s a bargain $390. A surround-view parking camera system is standard, and you can actually take a live photo using these cameras, remotely, at any time, using the BMW app as well. Rear passengers are treated to climate vents and climate control, with this test car showcasing a 12V socket and two USB-C ports. Legroom and headroom are very near the class benchmarks, and big bottle holders in the doors and a flip-down centre arm rest with twin cup holders adds further convenience. Our only real complaint about the back seat is that it is set quite low. This could become bothersome, particularly if you’re trading in an SUV. Many rivals in this class are pretty similar, though.

Boot space is unchanged from the rest of the G20 3 Series range, measured at 480L. This is also at the class standards. Some netted pockets in the sides are available to secure loose items. There is no spare wheel under the boot floor as the M340i comes with a puncture repair kit for the standard Michelin Pilot Sport 4 S tyres. Inline-six engines could be regarded as BMW’s quintessential engine configuration. One of the first things the company ever made was actually an inline-six, called the BMW IIIa, which was designed for fighter planes in 1917. In other words, BMW knows a thing or two about making these types of motors. Powering the M340i is the latest and most powerful 3.0-litre single-turbo six BMW (not BMW M) makes, called the B58M30O1.

There’s 500Nm of torque available from just 1800rpm and held up until 5000rpm. That’s not only an impressive amount of torque for this class, but the immediacy at which it can be dispenses really forces you back into your seat. With all-wheel drive it also means none of it is wasted away to wheelspin. Yes, the inner child in you might be wondering how quickly you could fry a set of rear tyres if BMW decided to stick with a traditional rear-wheel drive layout. But even we think AWD is the way to go here – and we prefer to look out the side window at every chance we get. The decision to go AWD seems to go perfectly with the character and somewhat subtle nature of this model. If you want to shred tyres at the track every other weekend, that’s what the M3 is for. In that sense the M340i feels like a sophisticated and refined option for those wanting to enjoy the 3 Series experience at the pinnacle level. You don’t need to a racing licence or extensive motorsport experience to really appreciate the performance available here.

Peak power is available at 6500rpm. At this cycle rate it sounds so freakin’ good. BMW is insistent on installing pointless active sound enhancement systems into its vehicles, even on the M340i. But, fortunately, the beautiful soundtrack from the engine itself and from the exhaust overshadows most of the fake speaker-enhanced noises. At this power output it just misses out on being the most powerful vehicle in this specific class; the top podium position goes to the Mercedes-AMG C 43 (287kW/520Nm). Even so, the BMW has an official 0-100km/h claim of 4.4 seconds, bettering the AMG’s claim of 4.7. That brings us onto a good point; weight.

You might be wondering if the M340i is heavy due to the addition of front drive shafts and a revised transmission and so on. At 1633kg tare, it is 200kg heavier than the 330i. However, that uses a four-cylinder engine which would be a bit lighter than this six. At this point there is nothing really to compare it to in terms of weight, except perhaps that C 43 Mercedes which is also AWD, and weighs 1739kg (tare). The old 340i, based on the old platform, weighed 1502kg tare in auto form. Taking a look at the power-to-weight ratios, the M340i calculates at 5.73kg:1kW, while the old 240kW 340i auto calculated at 6.26kg:1kW. In the real world we clocked a best 0-100km/h run in just 4.18 seconds on a private road, with 0-200km/h coming up in an impressive 15.04 seconds. Over the quarter mile the best we saw was 12.40 seconds. These are awesome figures, let alone for a sub-performance variant and not a fully-blown top-shelf model.

We have no complaints about this powertrain. It is just perfect. You can pull away from slow, hairpin corners and merely lean on the go-pedal to achieve serious, gut-twisting thrust. Or you can wring it right out and enjoy that full-bodied six-cylinder sing right up to the 7000rpm redline. It’s versatile enough for everyday driving, too, and reasonably economical with an official average consumption of 7.7L/100km – we averaged 9.5L, but we probably enjoyed the higher rev ranges more than the average buyer will over a longer period. In terms of cornering capability, the G20 is unmatched in our view. And with the added bonus of AWD in the M340i, it gives you even more confidence behind the wheel. There aren’t many cars on the market at the moment, certainly not in this class, that can bolt from point to point through a windy road and cross country, in all conditions, quite like the M340i. It feels balanced, predictable, forgiving, and very precise but without being busy or fidgety.

The suspension is firm over poor country roads, but you can configure the driving mode so you have the Comfort suspension setting while also having Sport Plus for the engine, if you want to. It’s not like riding on a cloud, but it does help. If you really want to ride on a cloud you will need to venture elsewhere in this segment. But keep in mind the more comfort you add, subtract an equal amount of handling capability and sportiness.

The M340i xDrive is the new flagship 3 Series, and, in our view, the new benchmark for this class in terms of useable but mind-blowingly capable performance. You get all of the excellent G20 3 Series practicality and luxury, paired with relentless all-weather capability that’s accessible to a wide range of driver experience levels. It also produces one of the most alluring engine/exhaust sounds you’ll hear in this class.