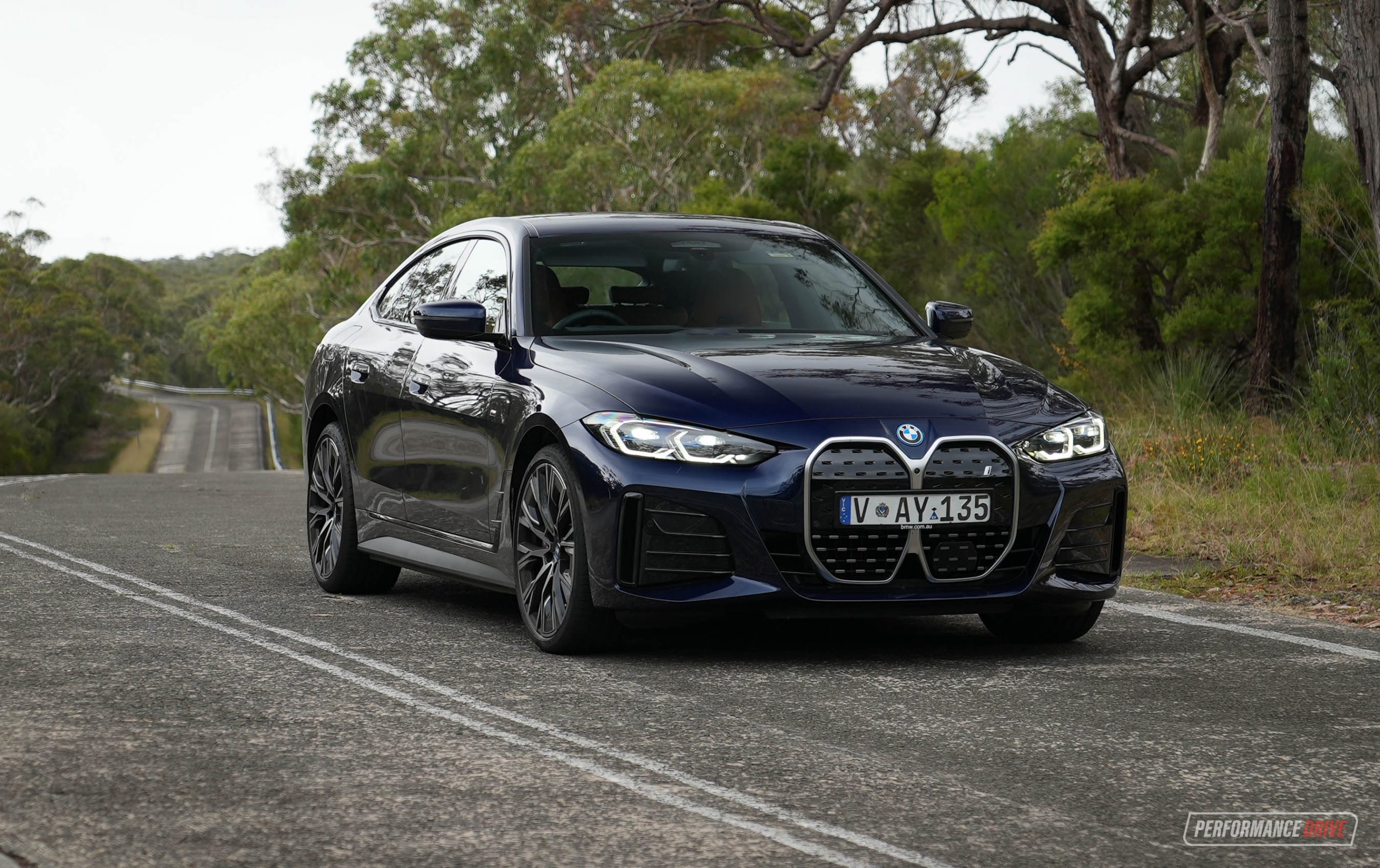 Welcome to the all-new BMW i4. This is the fully electric version of the 4 Series, in sleek Gran Coupe body style. It’s just one of many new electrified ‘i’ models coming from BMW, joining the iX3 and iX, and soon-to-be iX1 and i7. 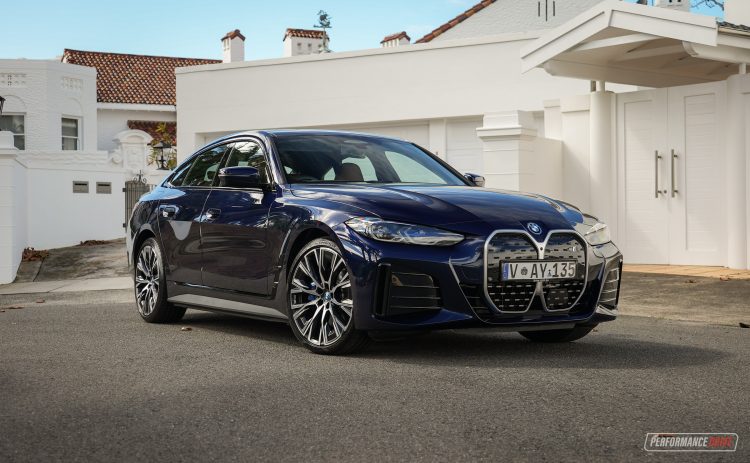 It definitely stands out on the road, mainly due to those big controversial front grilles. Aside from them, it looks sleek and elegant, befitting to the 4 Series persona. The i4 shares the CLAR platform with the regular 4 Series and 3 Series, and in fact shares the exact same external dimensions as the 4 Series Grand Coupe. Ground clearance is 2mm lower than the equivalent 430i M Sport though, likely due to the battery pack underneath.

Two versions of the i4 are available in Australia, including the 250kW/430Nm eDrive40 with a single-motor rear-wheel drive setup, and the flagship 400kW/795Nm M50 dual-motor all-wheel drive M Performance variant.

The i4 M50 starts from $124,900, which is perhaps a more even competitor to the $119k M440i. So that’s about $6k more for the electric setup between both M Performance models, which seems somewhat reasonable especially with other brands commanding much more for their electric alternatives. 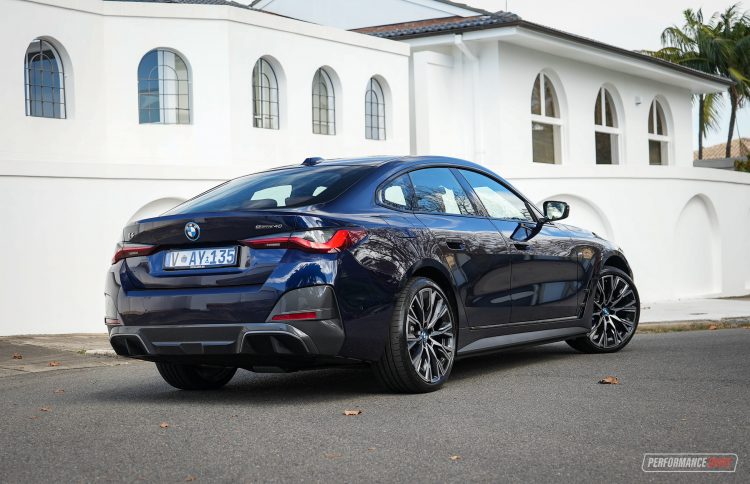 We love the clean body lines and the neat yet muscular rear haunches, while the side skirts add a surprisingly racy feel to it. With the M Sport pack you get a range of sporty details and trimmings, as well as multi-piston front brakes in blue, and adaptive M suspension.

This test car also shows off the classy 20-inch alloy wheel option from the BMW Individual catalogue, as part of the ‘Balance’ package. They’re wrapped in Goodyear Eagle F1 tyres, measuring 245/35 on the front and 255/35 on the back. Grip levels are outstanding, even with two-wheel drive and all of that instant power and torque. 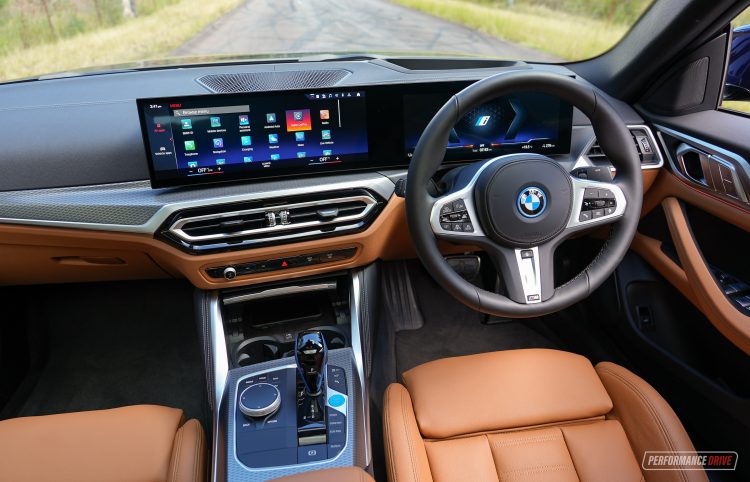 Taking a look inside, you’ll be blown away by how luxurious this model is. It’s almost like a 7 Series or at least a top-line 5 Series in here. The attention to detail is excellent, and all fixtures are built with a quality sturdiness. Leather extends to the door trims, with ‘Tetragon’ metallic trimming on the dash providing modernity and sophistication.

Passenger comfort is really good, and the driving position is spot on, as you might expect. These M Sport seats do a great job of cradling you when you want to tackle some corners as well, but they also provide good cushioning and long-distance comfort. There’s also a wide range of adjustment available, including from the steering column. 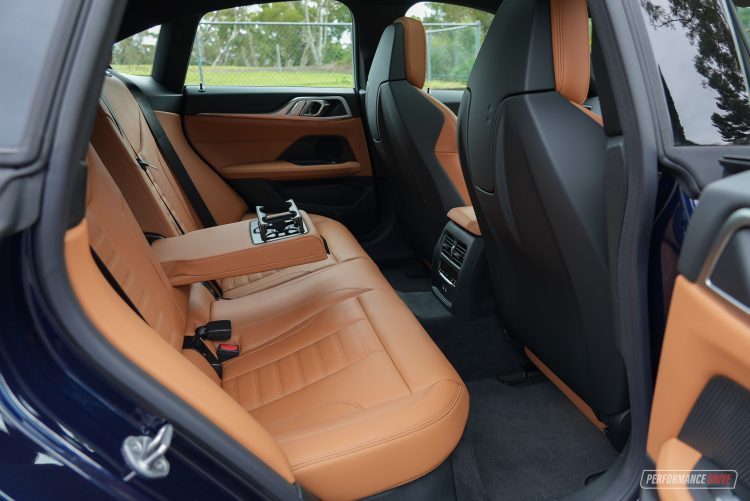 Rear seat space is a bit tighter for headroom, due to the sloping, coupe-like roofline. But it’s really not too bad once you’re in. There’s also climate controls and charging ports to keep passengers happy.

The star of the show has got to be BMW’s new twin digital screens that sprawl across the dash. We think it’s almost to the point of overkill, this industry race for bigger screens. But there’s no denying the wow factor they present. The main screen measures a massive 14.9 inches and it runs BMW’s new 8.0 operating system. The new system does take some getting used to if you’re already accustomed to BMW setups. But if you’re approaching this for the first time it should be pretty intuitive. 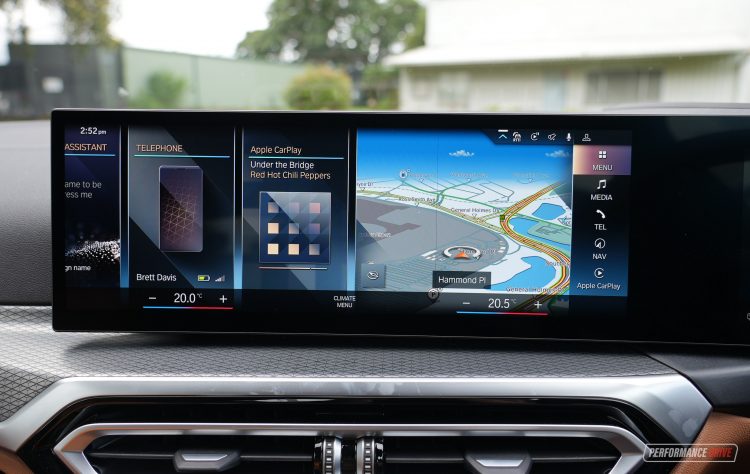 Most menus run vertically, scrolling up and down, but the home screen runs across horizontally. Designers have gone for a rustic, sandy colour scheme which is unique and pulls your attention, while the graphics are very sharp with good touch response from the screen surface.

Some of the areas of concern for us include the sheer number of menus and settings available. Although, this is obviously only going to be an issue during the early stages of ownership. Once you dive in you’ll see some very interesting options to play around with. 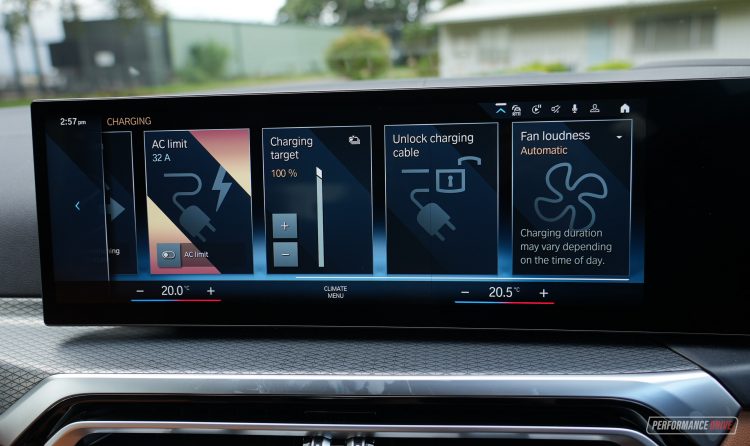 Such as the battery settings page, which gives you options for the very clever adaptive regenerative braking (slows the car autonomously – more in the drive section below), and even options to set the fan loudness during charging.

With the Gran Coupe body style you get a fastback hatch lid at the back instead of a conventional boot. This helps with practicality as you can easily load in big and bulky items. Although, the boot floor is quite high. There is some under-floor storage for the charging cables.

Unlike some EVs, the i4 does not offer any additional storage under the bonnet. Nonetheless, boot space is rated at 470L or up to 1290L, which is quite impressive for this class of vehicle. 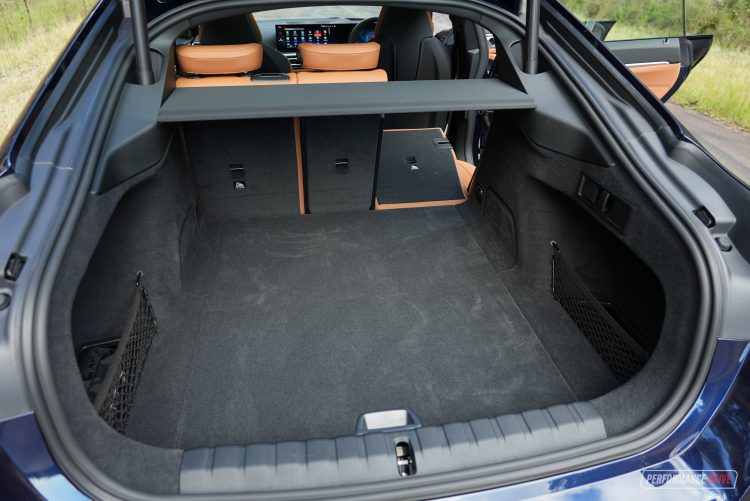 Up front, under the bonnet, you won’t find an engine. There’s just a bunch of hardware for the electrical system, and some chassis bracing to assist with steering response and rigidity. The 80.7kWh battery pack is mounted under the body, supplying power to a rear-mounted motor. During our test drive we discovered the motor works a bit like a limited-slip differential at the back, directing torque to the appropriate wheel for optimum cornering. It’ll even drift if you provoke it.

Even though it is an electric vehicle, it is definitely a proper BMW to drive. You get that really connected steering feel, and incredible balance and precision through the corners. You always know what the wheels are doing and how the tyres are managing your demands. You can feel it is heavier than a conventional 4 Series, however, during normal driving and even moderate sporty driving, it does not feel some 400kg heavier than the petrol equivalent (2050kg tare weight). 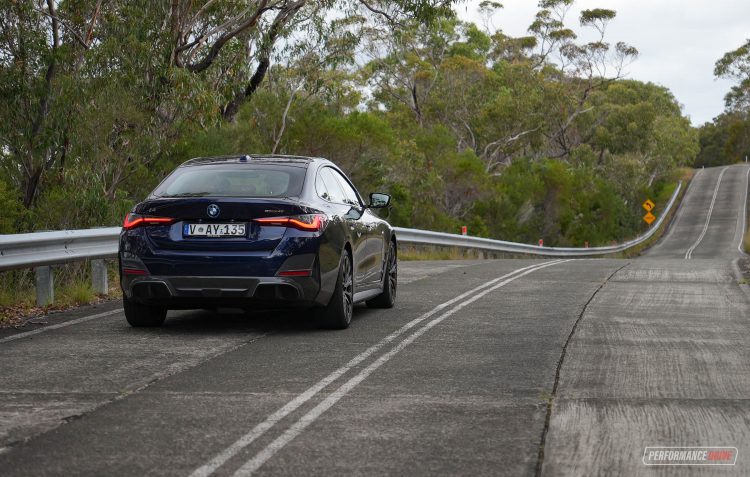 One of the real highlights for us is the suspension and ride quality. This soaks up bumps beautifully, which is not typical of an M Sport pack. Yet, there is no excessive body roll. BMW has worked in a sophisticated anti-dive, anti-lift suspension geometry to mitigate unwanted body movements, so it feels quite natural and linear. It’s not until you really push it does the weight become more apparent and the suspension over-compresses.

In Sport mode the suspension does firm up a bit, but still, the ride quality remains very good. Even on disjointed concrete roads where we conducted some vigorous test drives, it’s able to deal with bumps without sending shockwaves through the cabin. And perhaps most importantly, it feels like it wants to make turns and supports dynamic driving styles. The centre of gravity is up to 53mm lower than what it is in the 3 Series, which means it is able to generate huge g-force during turning. 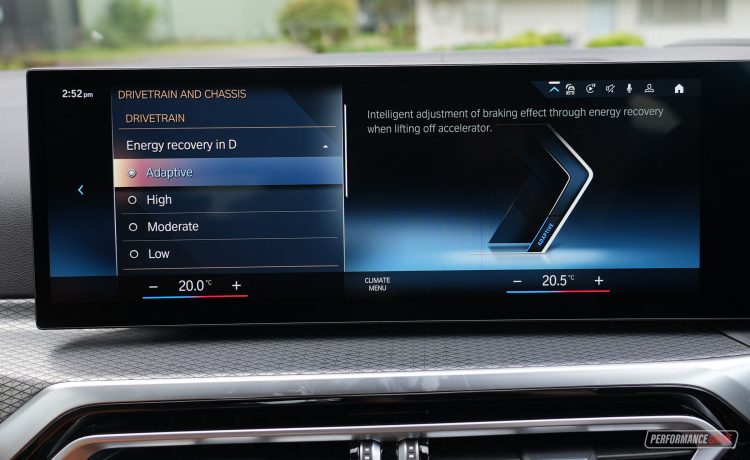 Speaking of drive modes, there is a very clever Adaptive setting for the regenerative braking. When activated, it’s able to determine when braking is needed, and it automatically starts to slow the car for you in anticipation. It’s not jerky or excessive, and it doesn’t immediately start braking the moment you lift off the throttle. In other words, it can and will happily coast on the highway down a long hill, rather than instantly – and annoyingly – slow the car like many other EVs. We left this setting on for most of our drive purely because it seemed so in-tune with our driving.

As for the performance, you get 250kW and 430Nm. That’s similar to what you get from BMW’s B58 3.0-litre turbo inline-six that’s employed in a number of ’40i’ models. But unlike the inline-six, the outputs here are available immediately. As soon as you push the pedal down it responds and takes off. So as you can imagine, dancing up a twisty mountain road, it just squirts and darts between turns, offering response like no petrol engine could provide. 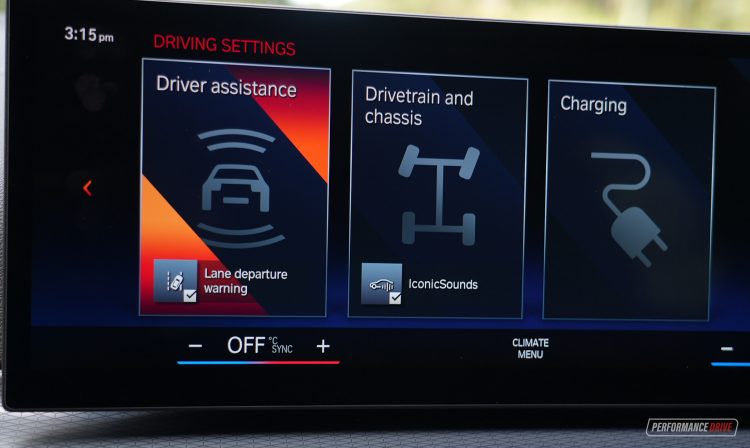 Being an EV, there is of course no exhaust sound to enjoy. BMW does offer artificial sounds in the cabin, composed by musician Hans Zimmer and BMW’s creative sound director Renzo Vitale. Fortunately though, BMW has finally offered a button to switch on or off the fake ‘IconicSounds’ engine noise. As hard as EVs try, they are never going to produce a noise as seductive or as desirable as a nicely-tuned petrol engine in our opinion. But hey, if you use sound to reference driving inputs, then it’s good to have the option there.

In terms of performance we clocked a best 0-100km/h run in 5.62 seconds, slightly bettering BMW’s claim of 5.7 seconds. We think this level of performance is just about perfect for a sporty luxury car like this. It’s not so fast to cause your licence to sweat in nervousness, but it is easily quick enough to get the heart pumping and help you enjoy a spirited drive. 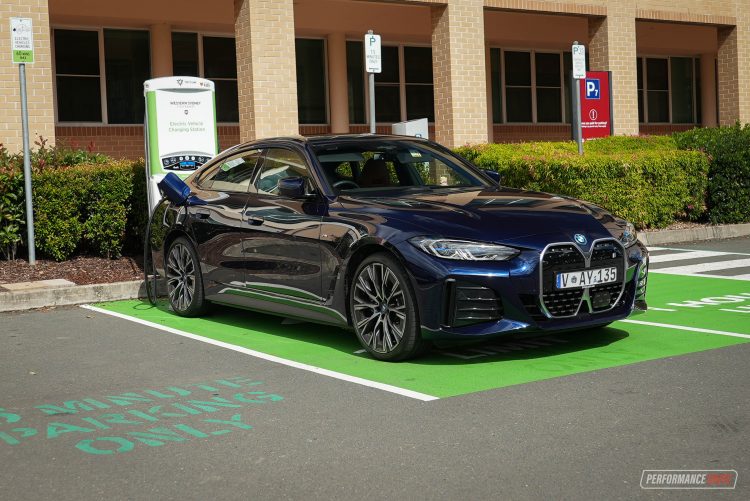 The official range according to the BMW Australia website is 520km. Elsewhere, including BMW’s official press release, the range is up to 590km. During our week this car easily managed 450km-plus, including plenty of acceleration stints and performance testing. The on-board range calculator constantly adapts to your driving habits, which can seem a bit confusing at first.

For example, we drove from Sydney to Wollongong (about 80km) and the range figure on the dash actually went up 2km by the end of the journey. That’s because the car constantly calculated the potential based on the current demands. You can always keep an eye on the battery percentage gauge anyway if you don’t trust the range. And then recharging, we used a 50kW public charger which required about an hour to go from around 30-95 per cent. 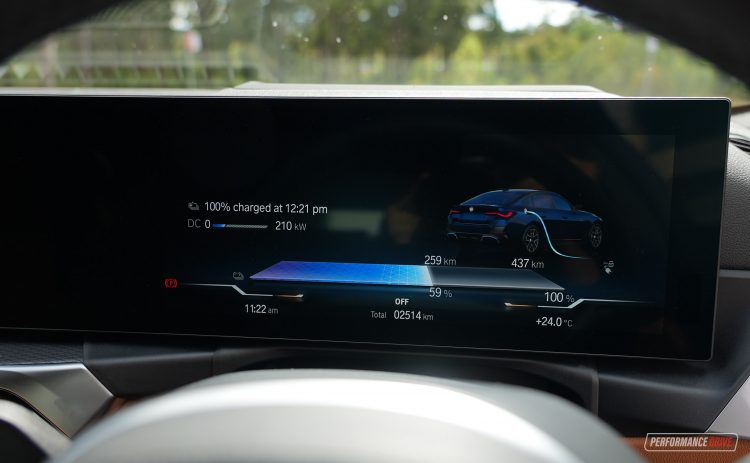 Forget the fact this produces zero emissions and offers exhilarating performance and response, and instead think of this as a more traditional luxury car. You’ll absolutely adore the ride quality and its serenely quiet, gliding drive (with IconicSounds turned off). The massive new digital screen is truly breathtaking as well.

For us, it’s just the front grilles that need fixing. Obviously styling is a subjective thing but in this case we can’t see how these grilles enhance or supply any sort of elegance, athleticism or tidiness to the package. These are the characters portrayed everywhere else but the grilles simply seem out of place in our opinion.

CONS:
– That grille design needs to be binned
– Can’t seem to turn air-con off and just have fresh air venting in
– About 400kg heavier than equivalent RWD petrol 4 Series