ARK Performance and Hyundai have provided a preview to their upcoming 2013 Hyundai Genesis Coupe project car that will debut at the 2012 SEMA show in Las Vegas next month. 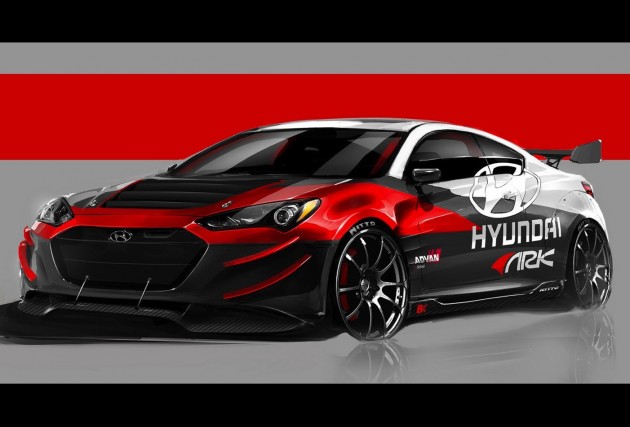 You may remember the ballistic little ARK Performance Hyundai Veloster from SEMA last year. It featured a wild widebody bodykit and various mechanical enhancements to take power out from the standard 103kW to an impressive 157kW.

The new project works on the fresh 2013 Genesis Coupe. ARK Performance says that the final product will be a “high performance track edition”, with extensive modification in, around, and on the outside of the rear-drive coupe.

Power will come from a tuned version of the Hyundai 3.8-litre V6 helping it to produce around 295kW. Engine mods will include a new crankshaft, a new air intake, and a revised engine computer setting.

As you can see by the preview image, the ARK Performance 2013 Hyundai Genesis Coupe will showcase a thorough styling and aerodynamics workover. Enhancements include a very aggressive front spoiler, side plates or ‘winglets’ for added downforce, and a chunky rear wing and diffuser at the back.

To ensure the Genesis Coupe is up to the task of taking a beating around the track, it will also feature a six-piston brake package with larger discs, as well as racing adjustable suspension kit for fine tuning.

Ted Lee, owner of ARK performance, recently spoke about the project. He said,

The final product is set to debut at the SEMA show, running from October 30 until November 2.