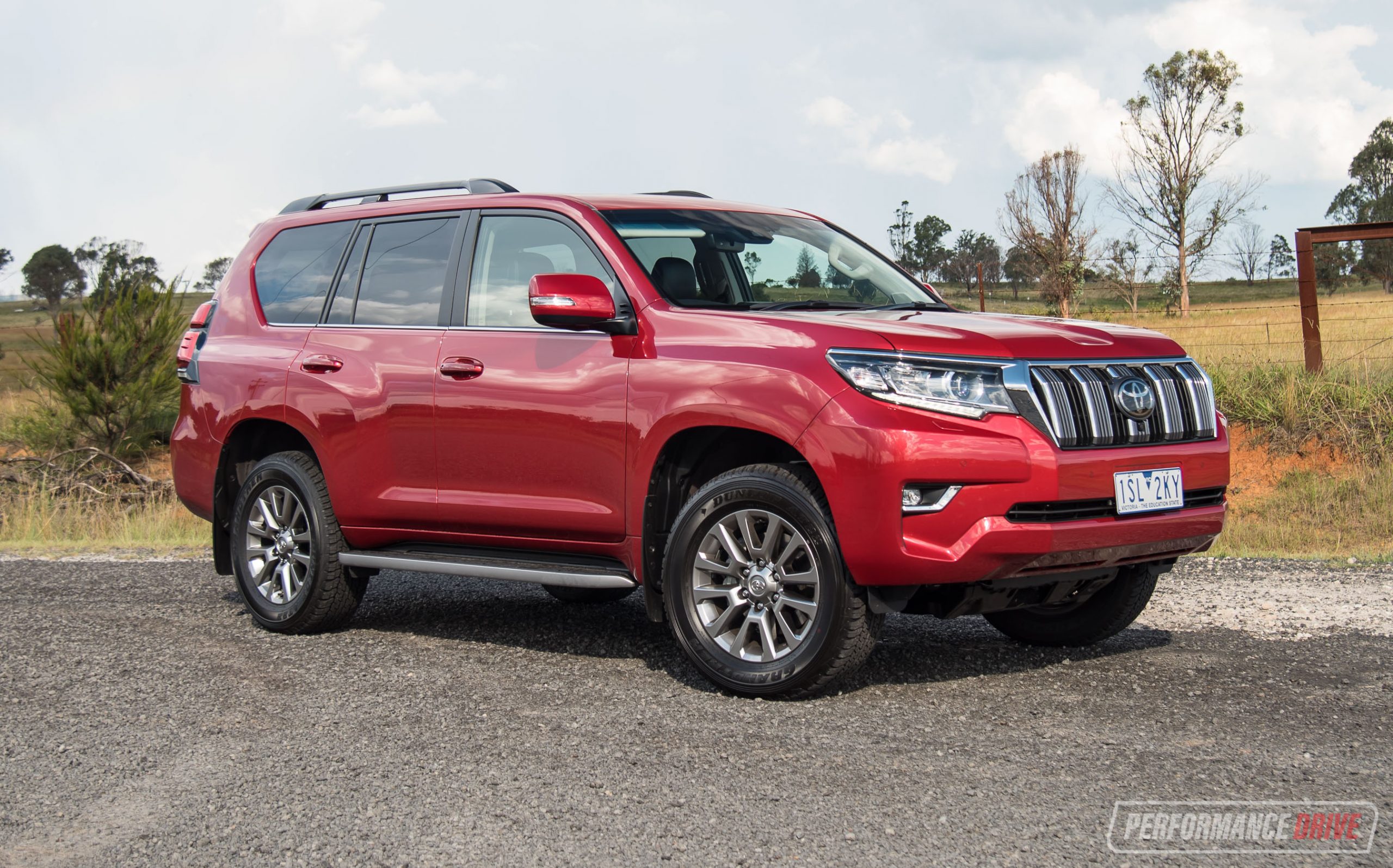 The Prado is Australia’s best-selling large SUV, and for the 2021 model update, Toyota has done… not all that much actually. But that’s probably because the current formula is exactly what buyers want. 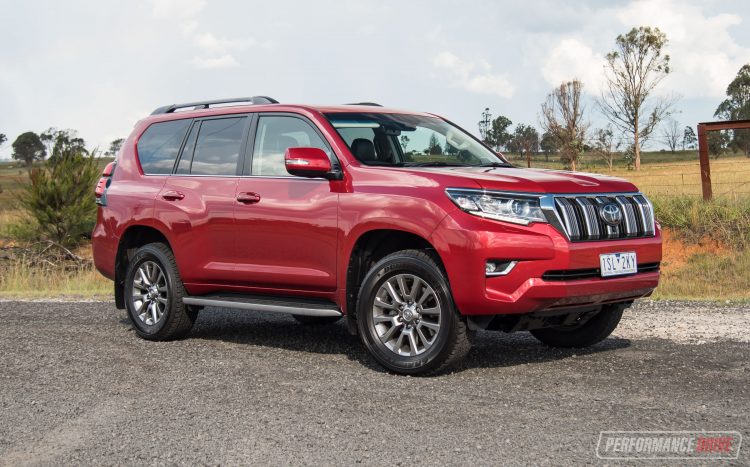 During 2020 Toyota Australia sold 18,034 of these things – the highest sales of its class. That was down just 1.6 per cent on 2019 efforts, even through the chaos of coronavirus which influenced a -13.7 per cent droop in overall industry sales. In other words, the Prado is clearly a favourite and buyers are allured no matter what.

No major changes are applied to the exterior design for the 2021 model. This theme carries over from the 2017 facelift. But Toyota has introduced some new technologies beneath the skin to improve user functionality, updated the safety gizmos, while the engine has been boosted to increase performance and economy.

Four main variants continue on the Aussie market, ranging from the GX, GXL, VX, to the top Kakadu as tested here. Prices open at $59,840 and top out at $87,030 (excluding on-road costs). All except the GX feature a seven-seat interior, but if you hand over an extra $2550 on the GX Toyota will stick in the third row for you. 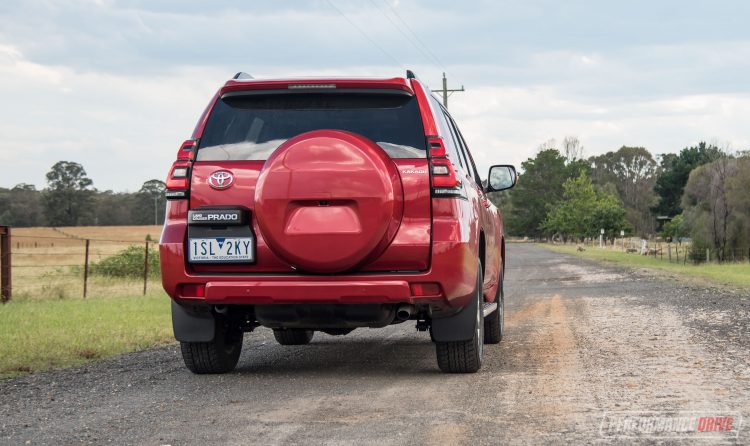 You can think of the Kakadu as the smaller brother of the LandCruiser Sahara. It’s packed to the brim with luxuries and is better-prepared for diverse applications. For example, this variant continues with height-adjustable suspension with Toyota’s Kinetic Dynamic Suspension System and adaptive dampers. Aside from the improved off-road performance in its highest setting, the bespoke setup also provides superior ride quality over the standard coil springs.

The Prado continues to use a body-on-frame platform with plenty of under-body protection for those serious off-road excursions. As standard, the Kakadu comes with all-terrain tyres measuring 265/60. This is becoming a point of difference in this segment as some other heavy-duty SUVs in this class are switching to more fuel efficient and quieter, albeit less off-road friendly, highway-terrain tyres. 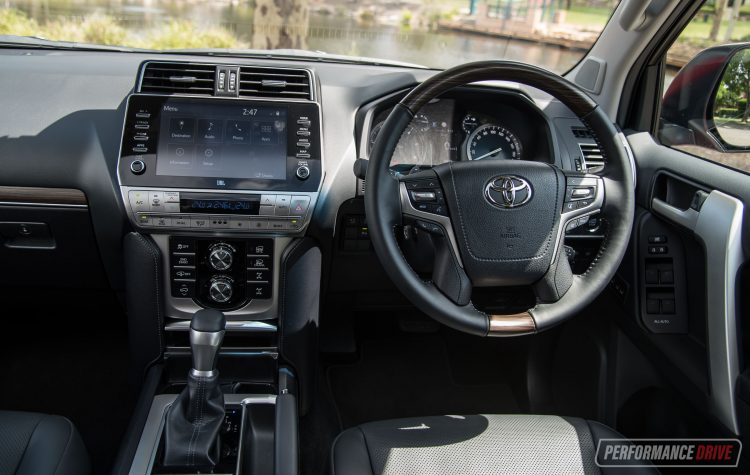 Toyota has introduced a new flush-fitting 9.0-inch touch-screen for the 2021 model, replacing the old 8.0-inch setup. It includes Android Auto and Apple CarPlay, and in the case of the Kakadu, the screen displays views from the front, side, and rear external cameras. Tunes are sent through a hearty 14-speaker JBL sound system. Touch-screen functionality is okay but there are better systems out there. User-friendliness is very good though, with big, clearly-marked buttons adding to this.

This is a comfortable and family-friendly place to be in general. Aside from the big step up to get in, there’s heaps of headroom and legroom, endless storage spots around the place, and there’s even a flip-down DVD player for the rear passengers. The second row can slide forward or back to prioritise legroom to the third or second row, and three-zone climate control ensures all cabin members remain thermally balanced. 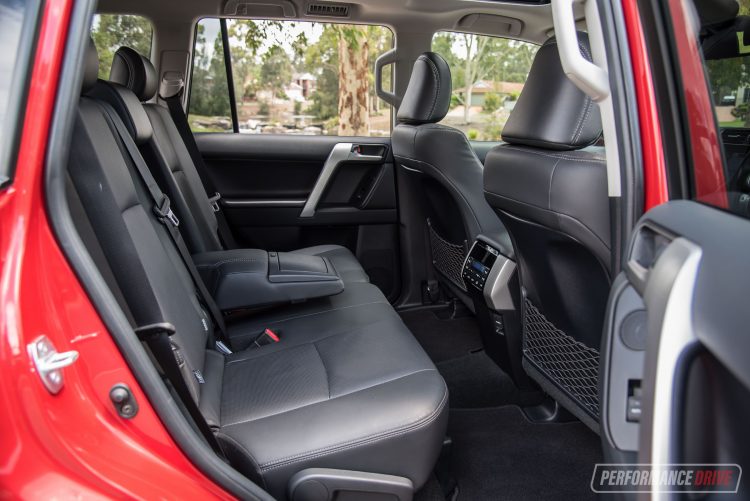 Access to the third row is pretty easy thanks to a quick-action fold-and-slide mechanism, requiring just one flick of a lever on the second row. Passenger space in the third row is reasonable, with decent headroom in particular. Legroom is a big tight though, as is the case for many SUVs in this class. Since the Prado is a proper, heavy-duty off-roader, the floor is quite high and so it means your legs only drop down minimally from the third row seat.

The Kakadu also comes with electric-folding third row seats, which is about as easy as it gets. There’s a switch panel in the boot area allowing you to deploy the seats at the touch of a button, and the seats are stored flush in the floor when flipped down. Boot space isn’t that impressive on paper – 120L/620L/1833L – especially with all three rows up. But in five-seat configuration there is plenty of room for a big family road trip. 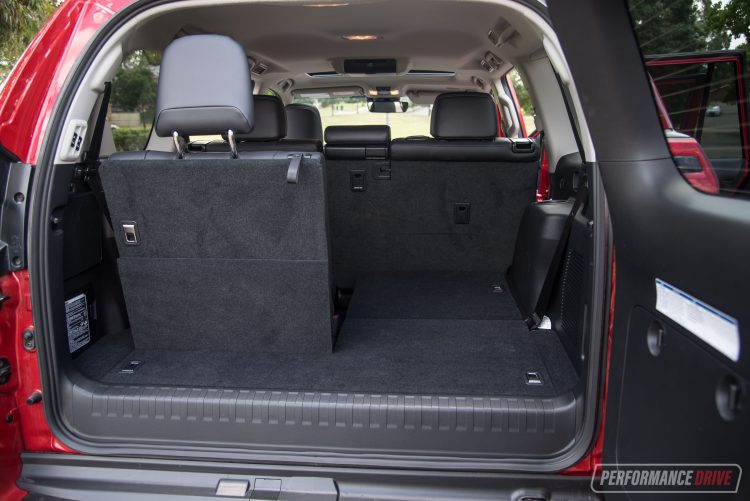 One of the biggest changes for the 2021 model is the introduction of the updated 2.8 turbo-diesel engine. This is the same retune recently announced for the HiLux and Fortuner. Thanks to a new turbocharger (larger turbine), higher-flow injection, revised head and optimised internals, the unit now produces 150kW and 500Nm. That’s a healthy step up from the previous 130kW and 450Nm.

According to our tests this new model is about four whole seconds quicker across 0-100km/h. Compared with the previous Kakadu we tested in 2018, which clocked the sprint in a yawning 14.32 seconds, we saw a best of 10.15 seconds in this. That’s very reasonable acceleration for a large SUV. And let’s not forget this isn’t just a jumped up wagon. This is a heavy-duty 4WD with a thick and heavy chassis. The Kakadu is also laden with luxuries, resulting in a hefty kerb weight of 2455kg. 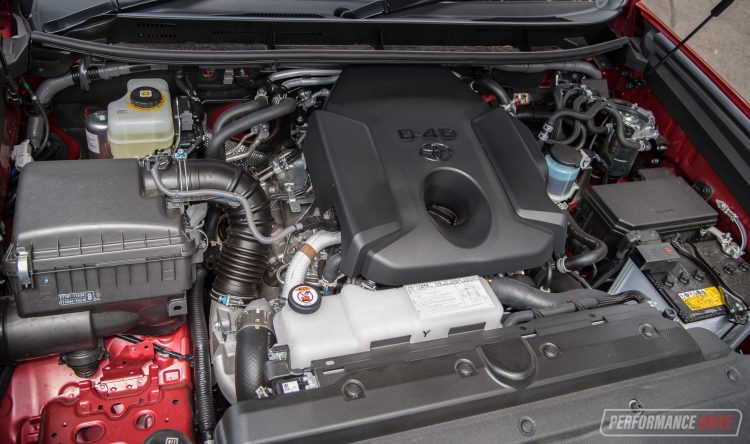 Obviously performance isn’t of huge importance with vehicles in this class, and probably isn’t going to be very high on the priorities for most buyers in this space. But we think it is great to see Toyota has made some real improvements in this area as the previous model was rather slow.

What will be important to more buyers is the other benefit of the revised engine; economy. On the official combined cycle the Kakadu uses 7.9L/100km, down from 8.0L/100km before. But, in the real world we found that since the engine doesn’t need to be pushed as hard, what you experience in the real world is much more realistic to the claim. In mixed conditions, including performance testing, some off-roading, and some highway stints, we returned an average of 9.2L/100km. That’s not bad at all for a big, 2.4-tonne machine. 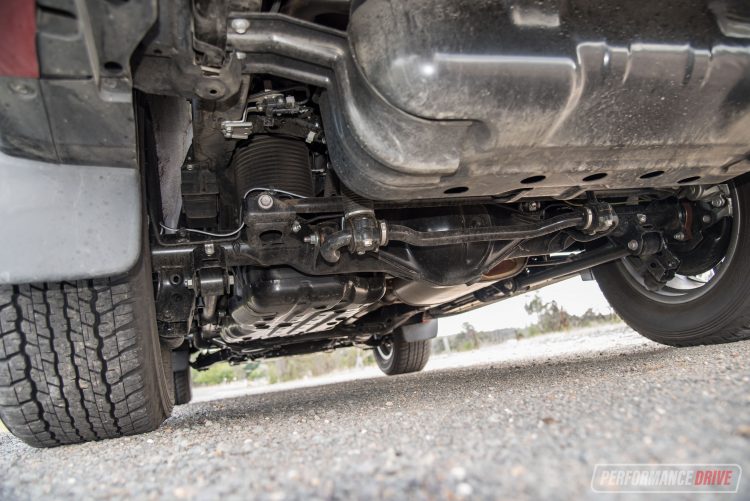 Around town the Prado is surprisingly pleasant to drive and easy to manoeuvre. Yes, it is still a bit of a truck in terms of the chunky body and high ride, but it’s not intimidating. Parking is a breeze, helped by the surround-view cameras, and the massive side mirrors will no doubt assist during towing. Speaking of which, the Kakadu has a braked towing capacity of 3000kg, as before.

Out on the open road this updated engine just purrs along. It was already a refined unit for its class, with very little diesel clatter or roughness. However, now it seems even smoother. The power delivery is fairly linear, with a slightly wider mid-range of torque. Peak torque is available between 1600-2800rpm, up from 1600-2400rpm with the old 130kW/450Nm tune. 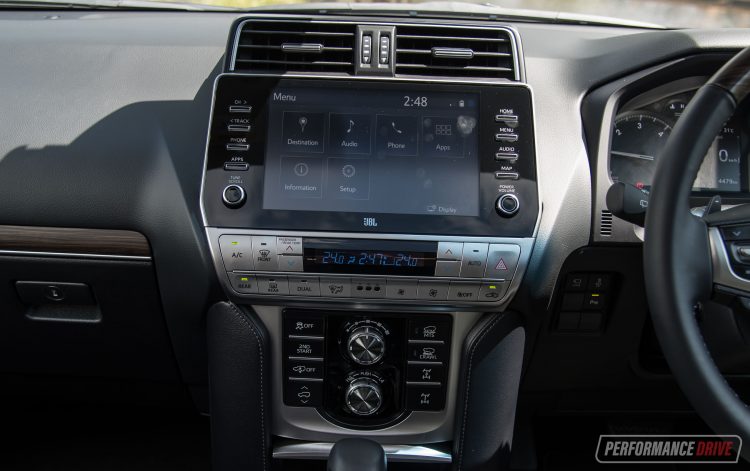 What we notice most is the additional punch. Actually, it’s not additional. It’s a state of maintained surge. This engine used to really plateau off when pushed and revved, whereas now if you need to overtake it will not only do it, but do it without having an asthma attack. For those looking to tow, this revised engine will drastically improve the experience there as well.

Cornering balance is acceptable for this style of vehicle, with some evident body roll but not as much as you might think. Diving under braking is not as well managed. The steering is relaxing and light in weight, if a little crude and straight-forward in its feedback.

As for off-road performance, the Kakadu presents some truly excellent foundations here. With the suspension raised, transfer case in low-range, and the rear diff locked, it’s as unstoppable as it gets for a seven-seat SUV. Even without low range engaged, the Prado features a full-time four-wheel drive system with a limited-slip centre differential. Those big balloony tyres provide plenty of give as well, or you can let them down for more serious conditions. 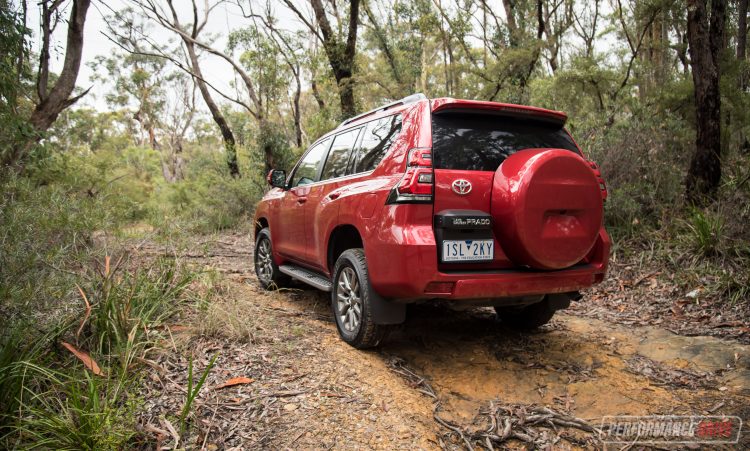 It’s a formula that Australians obviously can’t get enough off. Excellent off-road performance, a user-friendly cabin, loads of features (and luxuries for the Kakadu), and now with decent power and torque. Even though this shape has been around for quite a while now, the improvements in safety, technology, and powertrain should help it win even more buyers.

As before though, if you’re not planning to take part in off-road excursions, there are more practical and on-road friendly seven-seat SUVs in this segment. It’s worth mentioning Toyota Australia will soon release the all-new Kluger as well, which’ll be available with a hybrid for the first time, and underpinned by the accomplished and proven new TNGA platform.

CONS:
– Design is getting old, especially interior and some controls
– Kakadu is pricey and almost in LandCruiser territory
– Still feels like a bit of a tank on road