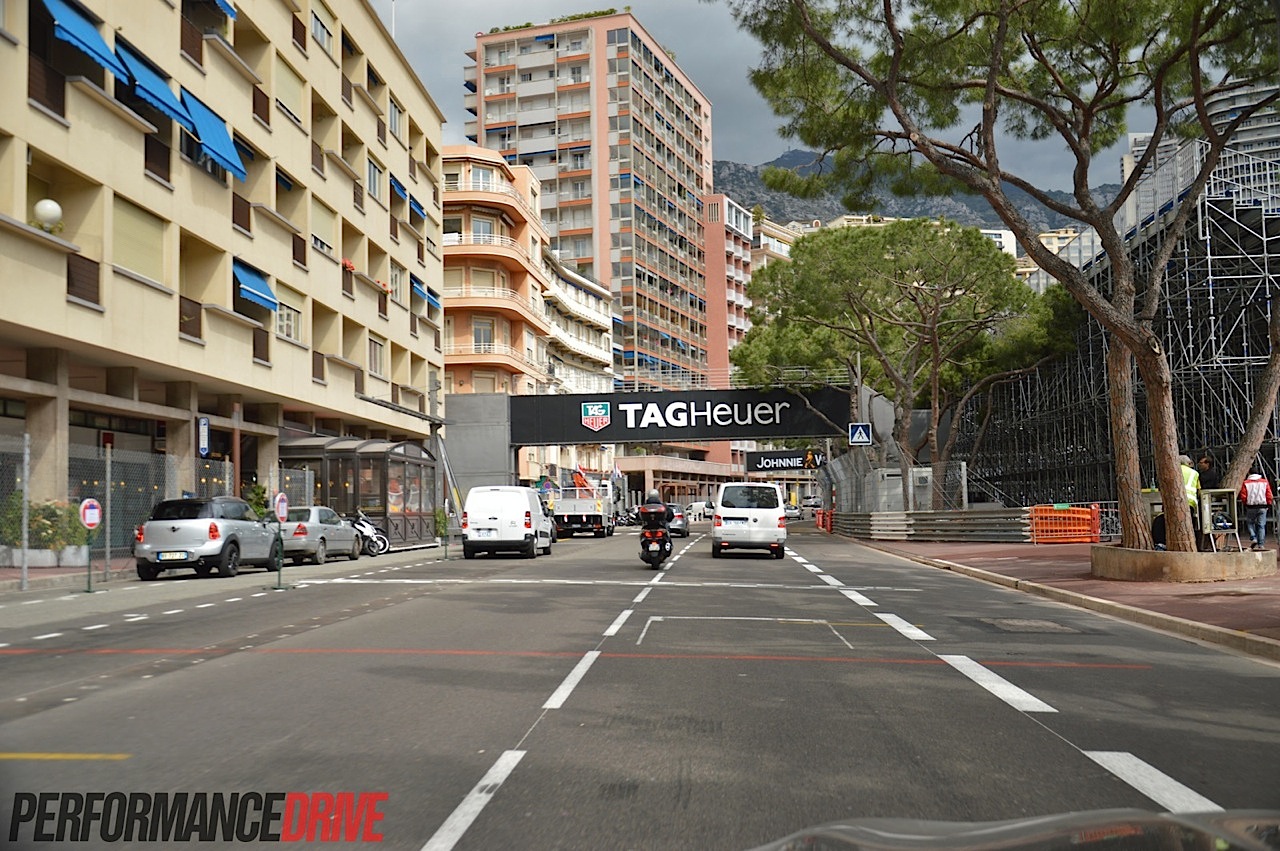 The Monaco F1 Grand Prix is one of the most prestigious motor racing events on the international calendar. It’s a weekend race that completely takes over the small sovereign city-state, with F1 cars reaching unimaginable speeds through the heart of Monte Carlo and its tight city streets.

Even at the quietest of times the location attracts high caliber celebrities and some of the wealthiest individuals in the world. During the F1 weekend, super yachts with helicopters parked on top flock to the harbour and the whole place is filled with the aura of luxury and fortune. 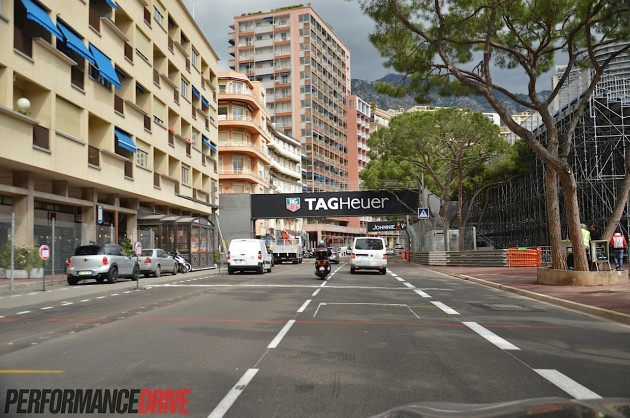 The Monaco F1 is one of the longest-running F1 Grands Prix in history, with an FIA Championship held every year since 1955, and pre-FIA championships held since 1929. In that time, a number of famous racing drivers have made their mark here; Juan Manuel Fangio won his first World Championship race; Aryton Senna holds the record for the most wins (six), with Graham Hill and Michael Schumacher following behind with five wins; while the fastest ever lap is currently held by Sebastian Vettel with a time of 1:13.556 (pole position, 2011).

As any avid car enthusiast would agree, Monte Carlo is the holy grail of street circuits. And being a genuine street circuit, it means that for every other day of the year it is simply a busy town centre that anyone can drive around.

Like us, you’ve probably always wanted to drive around it during a regular day of the year to see what all the fuss is about. We’ve ventured over to find out.

We started our trip in Sanremo in Italy, about 40km north-east of Monaco. It’s not quite as glamorous but it is much cheaper to stay and it’s a bit less full-on – the further south you drive the heavier the traffic tends to get.

Cruising down the winding, sea-skirted roads along the Riviera from Italy, along what is known as the Cote d’Azur, you get the feeling this place was designed for those who love cars and love driving. The scenery is beautiful and the weather is seldom unpleasant (apart from being a bit overcast for us). 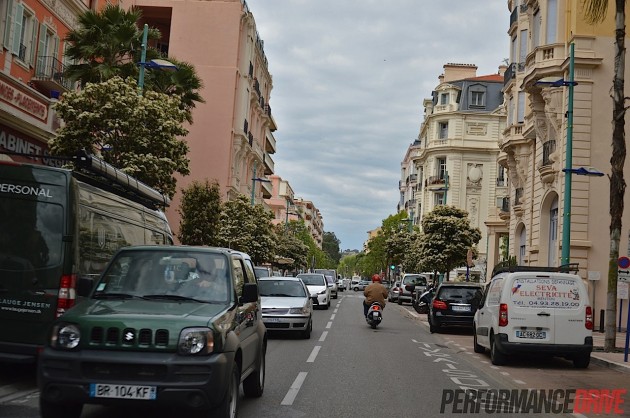 While the buildings are old and original in Italy, almost immediately after crossing the boarder into France the buildings are noticeably cleaner and in most cases they have been restored and feature stone and bronze trimmings, with plenty of pink and peach concrete. 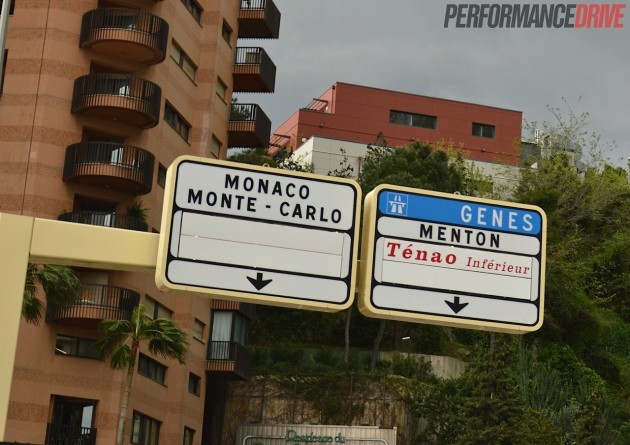 The road that trails along the sea also seems more consistent and enjoyable in France, with fewer blind side streets and confusing intersections. And fewer mad men on scooters.

We approached Monaco from D6007. You can come in from the Autostrada (highway) which runs above, up on top of the hills, however, it’s not as fun and there is a toll charge. 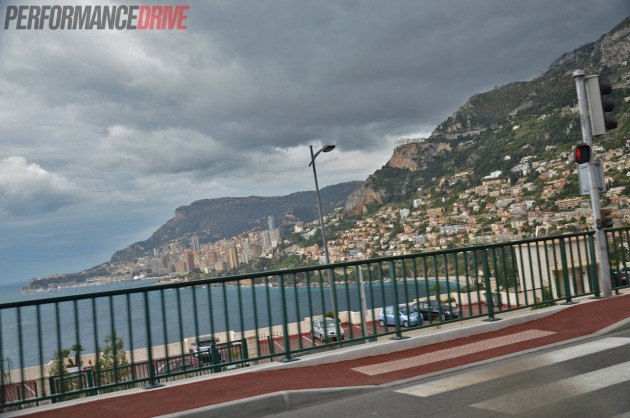 When you first hit the outer skirts of Monaco, your heart rate rises as the excitement of visiting this legendary circuit gets nearer. All of the buildings around you are very majestic and expensive, and the main mode of transport shifts from scooters to Bentleys and BMWs. Almost everyone wears designer clothes and looks important.

Today (mid-April), the traffic is appalling. A canoe would be a quicker mode of transport around these jammed up streets. There is an international tennis tournament on and there are cars, trucks, and tourists everywhere you look.

The F1 Grand Prix is on only a month away (yesterday) too, which means lots of trucks setting up scaffolding are happy to park wherever they please. This isn’t the Monte Carlo we expected. Fortunately, that’s before getting to the circuit streets. 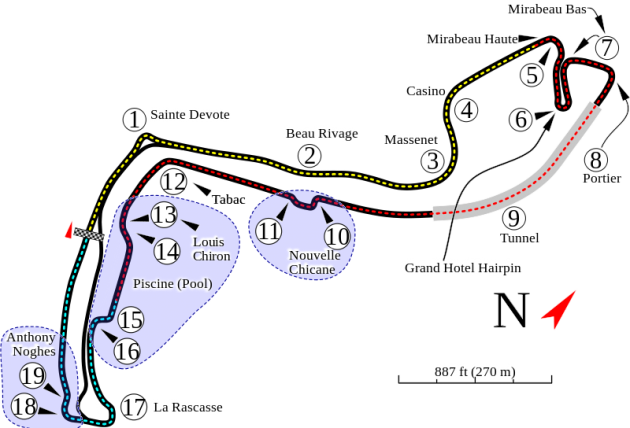 Even though the circuit is in the centre of the city, the specific streets that make up the circuit are relatively congestion-free for our ‘lap’. This means we can start at the start/finish line on Boulevard Albert 1er, appropriately.

From the start line the road kinks to the left then right and up the hill that leads to the grand Hotel de Paris and casino square. There’s actually a little refuge island and a split lane just at the start of the hill, which, obviously, you don’t see on TV during the F1. The hill is also much longer than it seems on TV. 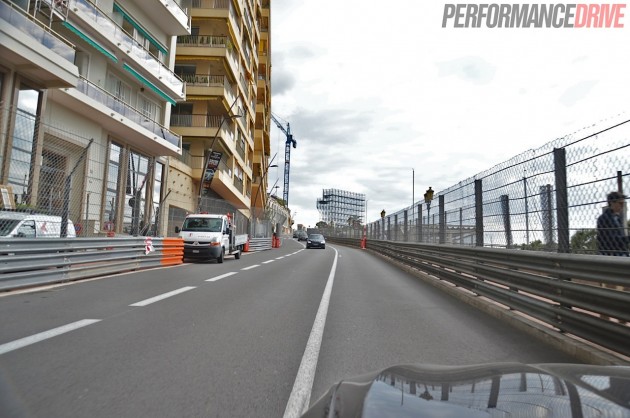 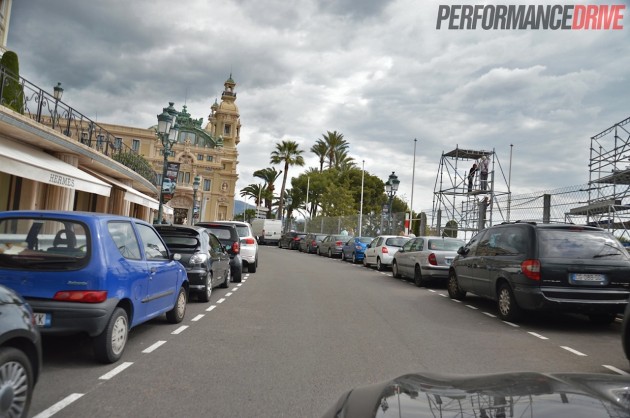 Today’s F1 cars reach around 270km/h flying up here. During a regular day, it’s hard to imagine how a car could possibly hit such a speed. Track organisers do an amazing job of clearing all obstacles and fencing off the roadside.

When you reach the top of the hill the casino comes into view, dominating the horizon. The building itself isn’t all that interesting to look at from the side. At the front it’s spectacular, and you just know lots of rich people have tried to grow their fortunes in there over the years. 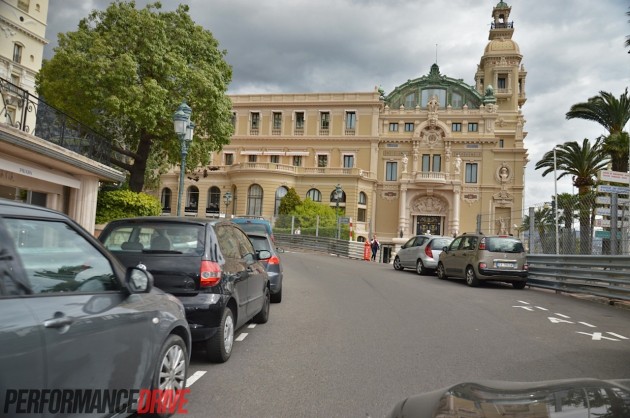 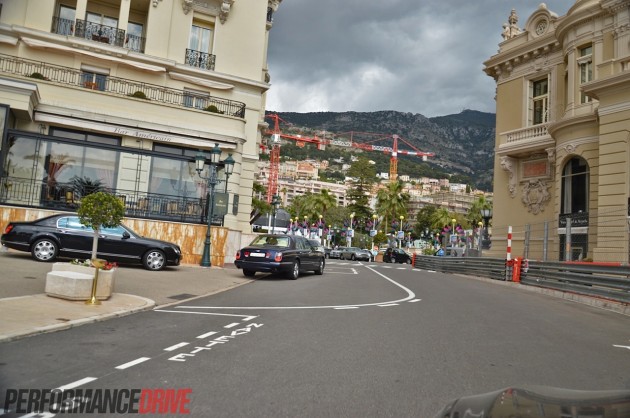 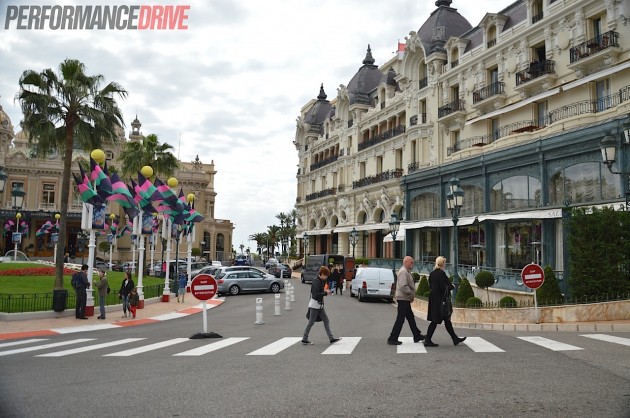 As you continue around to the left past the Hotel de Paris (above), the casino square opens up. F1 cars fly through here so quick you don’t even notice the large roundabout-like island in the middle.

The square is organised chaos during a regular day, with many tourists walking about. If it’s supercars you want to see, hang out here. It doesn’t take long before something exotic pulls up with an owner ready to check in to the exquisite hotel.

From there the circuit starts to drop back downhill. There is a side street on the left halfway down between turn 4 and 5 which has a large bump in the road (below). Even in a road car the bump is significant enough to unsettle the ride. F1 cars zip around it like it’s a chicane nowadays, nudging 200km/h. Again, it’s difficult to believe such speed is possible. 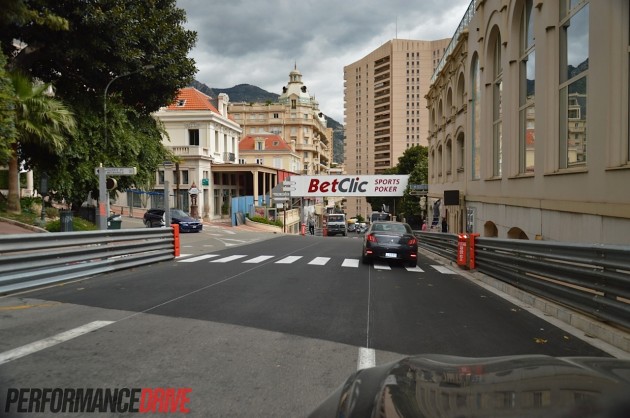 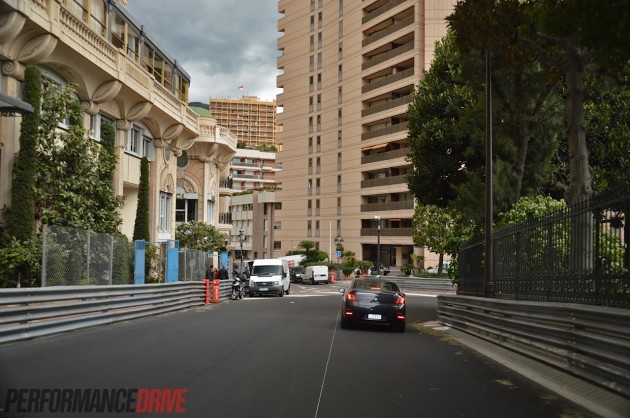 Down and around turn 5, the road becomes more like a race track as there are no side streets and you approach the instantly recognisable Grand Hotel hairpin turn. The hairpin turn really is a hairpin. It’s like doing a U-turn on a small roundabout. F1 cars, which use a special steering box just for this circuit, drop down to around 50km/h and use full lock during the race.

As you can see it can be a traffic nightmare on a regular day, and in fact there’s a traffic officer trying to free up some of the congestion. Part of the problem is due to the rock retaining walls that limit parking space for those who need to get onto the properties that surround the corner. 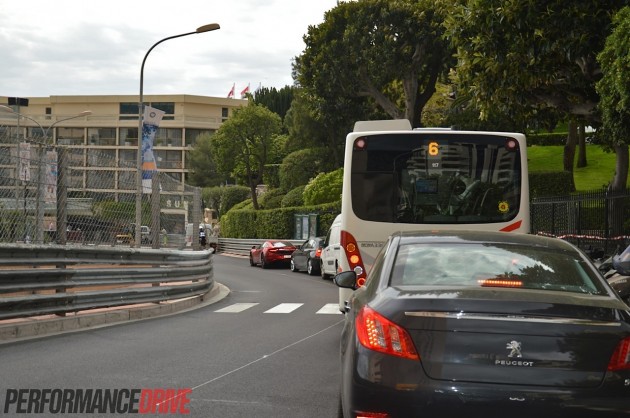 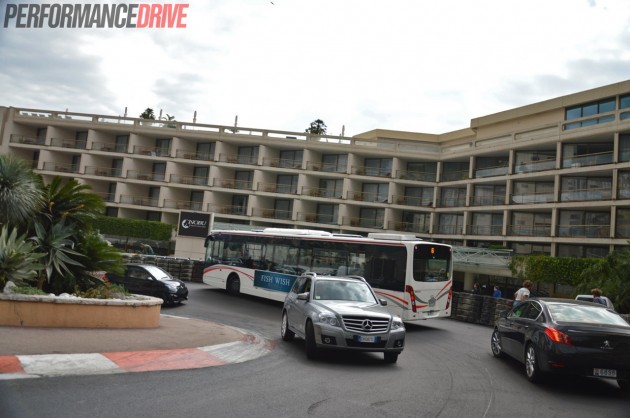 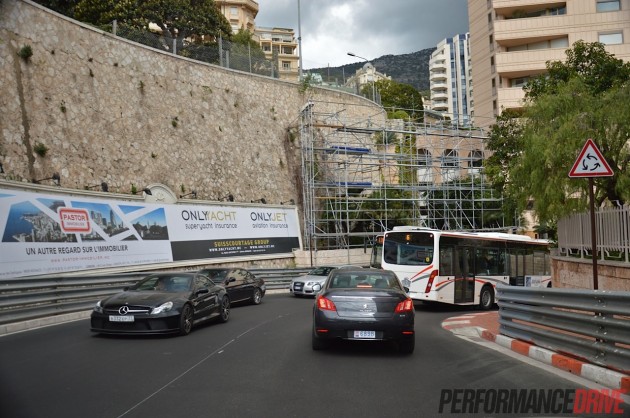 Once you’re free and out of turn 7, which is an intersection by day, you can see the famous tunnel which supports the Fairmont Hotel. This tunnel is quite long when you’re driving at 50-60km/h. F1 cars make it seem like a mere underpass or bridge, hitting an exit speed of around 280km/h – the fastest part of the track in most cases.

When you watch the F1 cars exit the tunnel and jump hard on the brakes, you assume the chicane approaches suddenly. In reality in a normal car, it does. It takes no time to drive down to where the chicane is. It’s amazing to think F1 cars can brake down to around 70km/h in such a short distance. 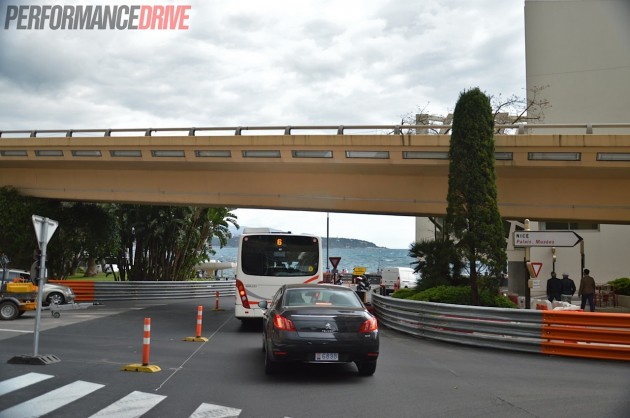 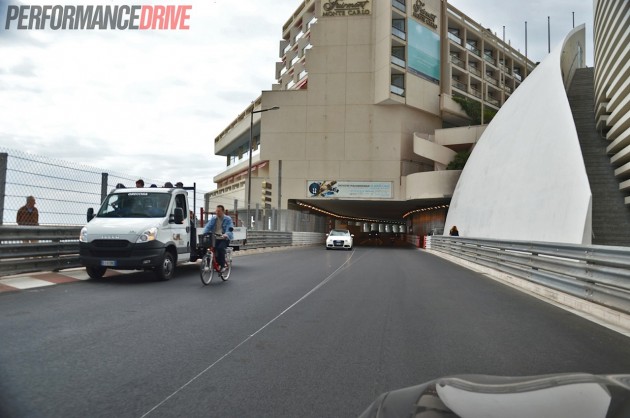 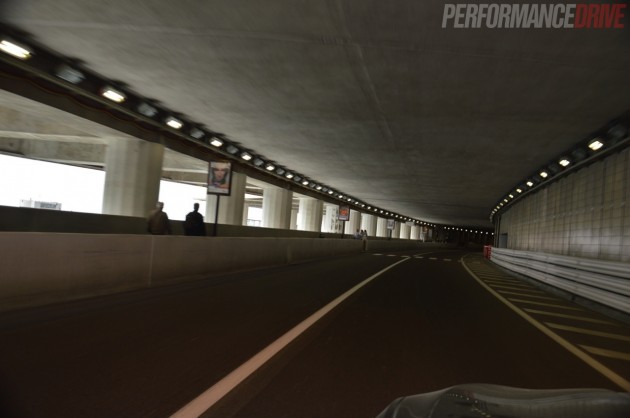 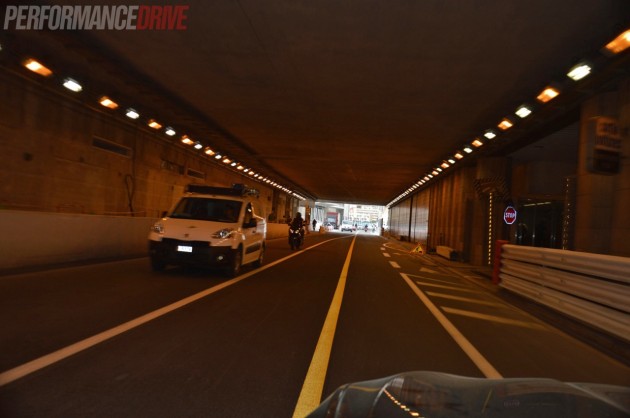 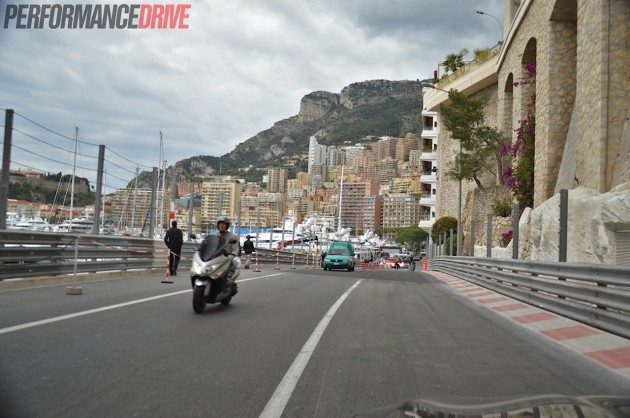 Along the bottom around the harbour is tricky. The street is dissected up into many segments, with some of the circuit running over parking areas and pedestrian zones. Here is where the circuit chicanes around the Olympic-size outdoor pool.

This area seems to be the quietest of all, with lots of setting up going on and more pedestrians than cars. It’s a pretty part of the circuit, with the sea glistening in the sun, sparkling reflections onto the exuberant yachts. You see a lot more by foot.

This is where, in 2006, Kimi Raikkonen retired from a race and walked off to relax and watch the rest of the event from his nearby yacht. 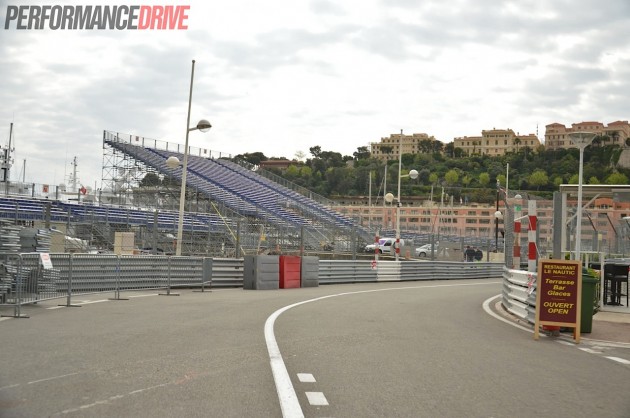 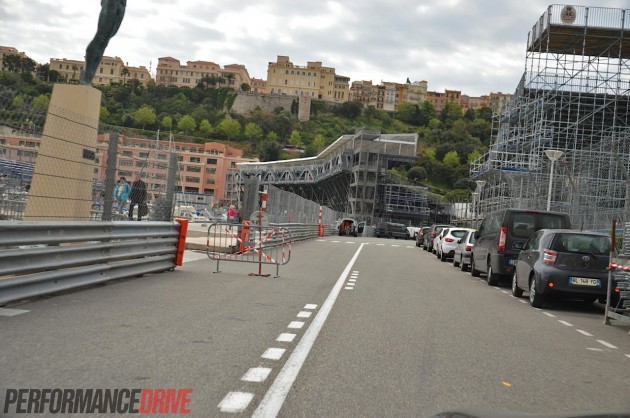 During a normal day, it is perhaps not as glamorous. There are a few large yachts around and certainly a feeling of rich and powerful in the air, but it doesn’t compare to the atmosphere during the Grand Prix weekend.

From here the circuit makes a few off-camber turns and back around to Boulevard Albert 1er, and the finish line. The main straight is quite cluttered, with parked cars on the side and busy traffic. The starting grid markers are the only clue that confirm you’re on a world-famous race track. 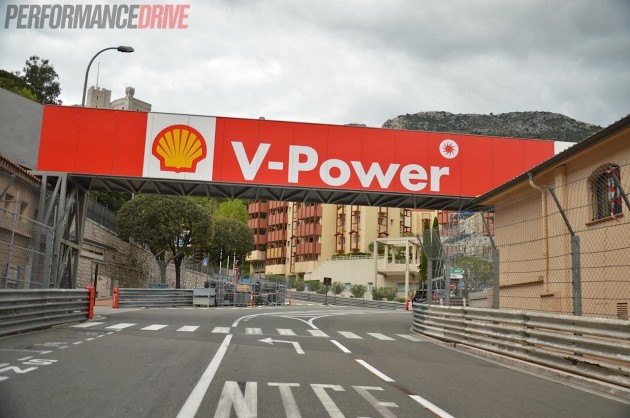 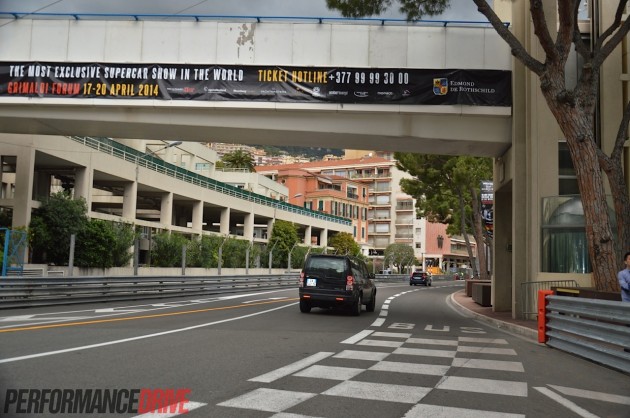 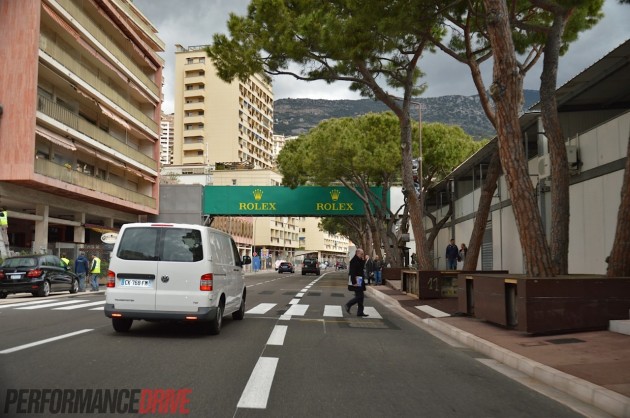 This year’s Grand Prix, which took place just yesterday, was won by Nico Rosberg. It was his second win at the fascinating circuit.

If you’re ever near the south of France or northern Italy, you simply have to make time to come and see this for yourself. It’s like no place on Earth. There’s also some fantastic driving roads up in the hills with incredible views – bring a convertible.

Click play below to see how it looks from an F1 car’s perspective. Specifically, this is Nico Rosberg setting a pole position lap in 2013 (1:13.876). He ended up winning the event.