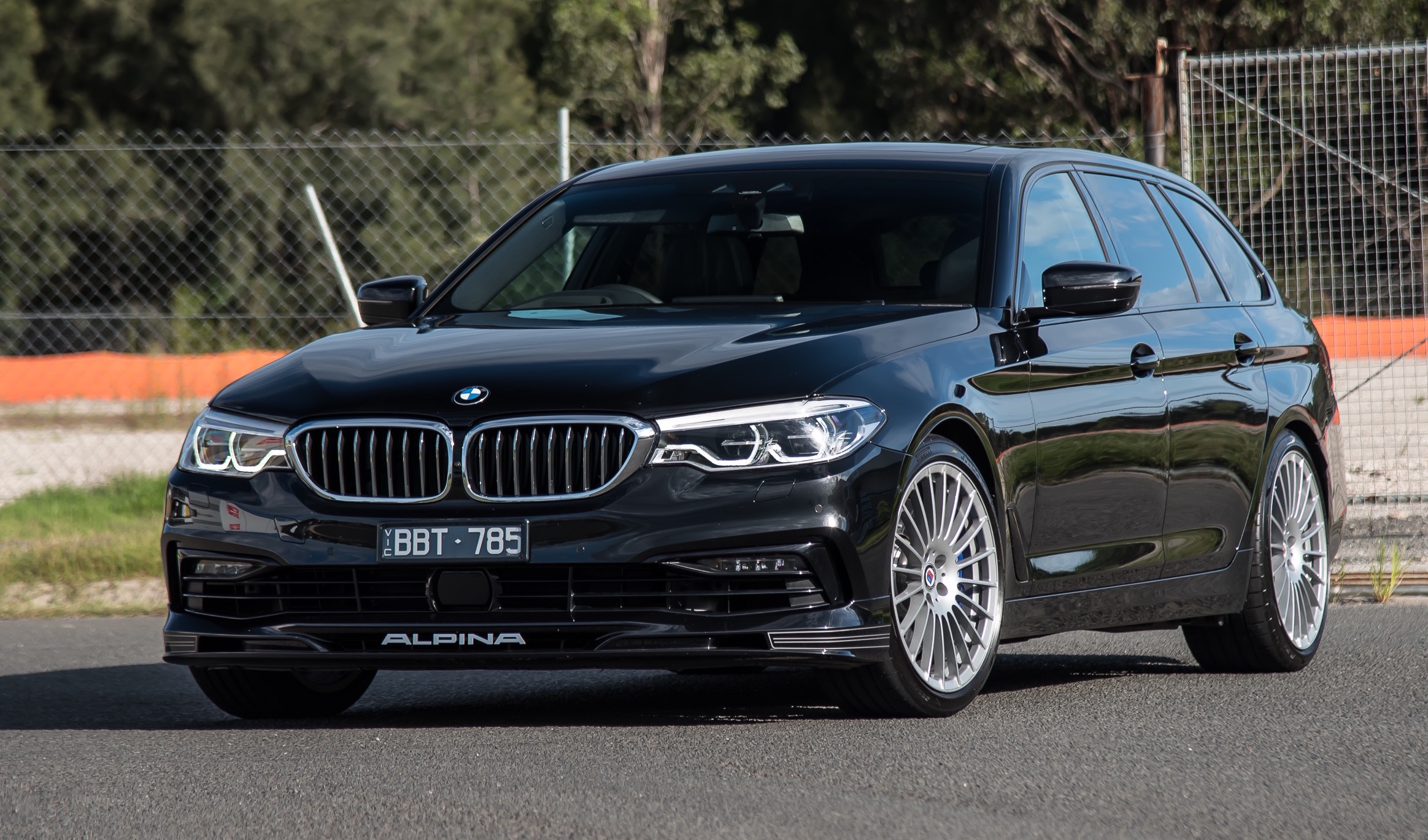 With a monstrous 800Nm V8 nestled under the bonnet and a top speed of 322km/h, the 2020 Alpina B5 Biturbo Touring is the fastest station wagon in the world. No other wagon, straight from the showroom floor, is able to surpass this. That makes the B5 a very, very serious contender in the world of sleek, super-fast wagons. 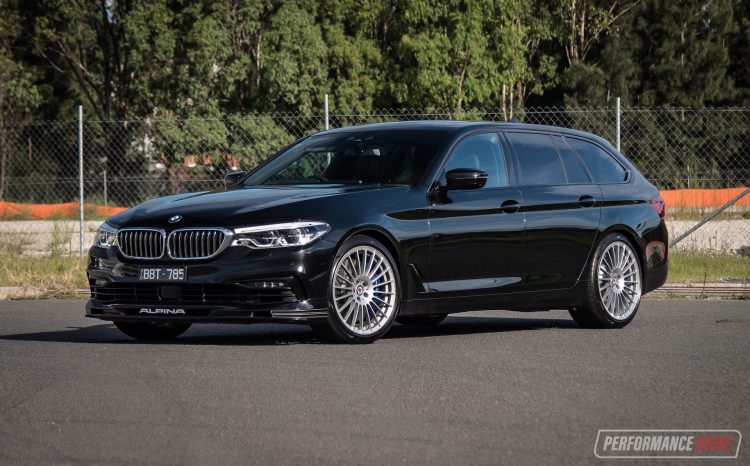 It is reasonably priced too compared with the nearest rivals. The B5 kicks off from $210,000 for either the sedan or wagon (excluding on-road costs), and the sedan’s top speed is even higher, at 330km/h.

Lastly, of course, is the BMW 5 Series on which the B5 is based. There is no M5 wagon, but the M5 Competition sedan retails from $234,900. And even that is limited to 250km/h. Obviously you can remove speed limiters but they still won’t catch the B5 for sheer velocity. Our point is though, while expensive, the B5’s starting price is actually pretty reasonable for this class, in Australia’s high-tax luxury car market anyway. 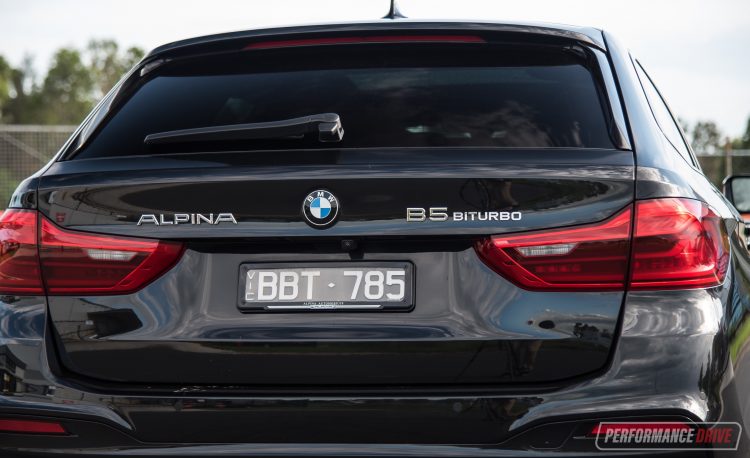 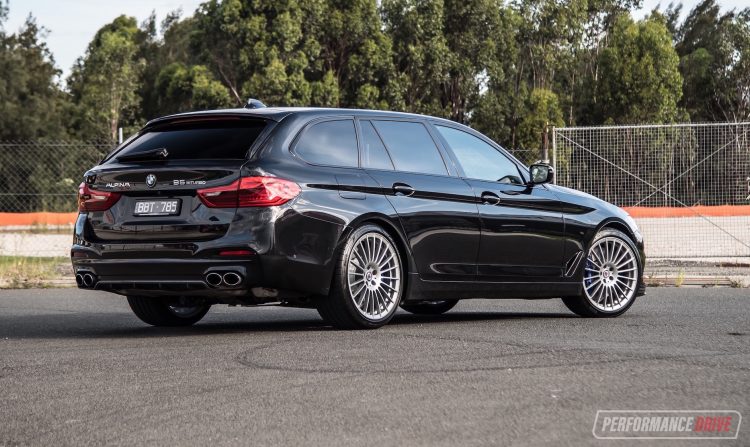 2020 Alpina B5 Biturbo Touring – THE PACKAGE

For performance car and BMW fans, Alpina represents a subtle yet very high calibre tuning personality. It doesn’t shout and dance and make a big deal about what it does. But in fact, the Buckloe-based, German car manufacturer has more heritage and experience in this area than many other rivals. Although it does work closely with BMW, Alpina is a manufacturer in its own right. In Australia Alpina operates as Alpina Automobiles and vehicles can be purchased from BMW dealerships. It’s similar to how HSV models could be purchased through Holden, before all that bad stuff happened.

At the moment the Alpina range consists of the BMW 3-Series-based B3 Biturbo, the X3-based XD3, and this, the 5-Series-based B5 Biturbo. All vehicles are completely re-engineered products, featuring a huge range of bespoke components, tuning and settings, and interior appointments and subtle cosmetic enhancements. You could think of the B5 Touring as like a BMW M5 wagon, only with a philosophy focused more on comfort and refinement, and of course extreme speed. 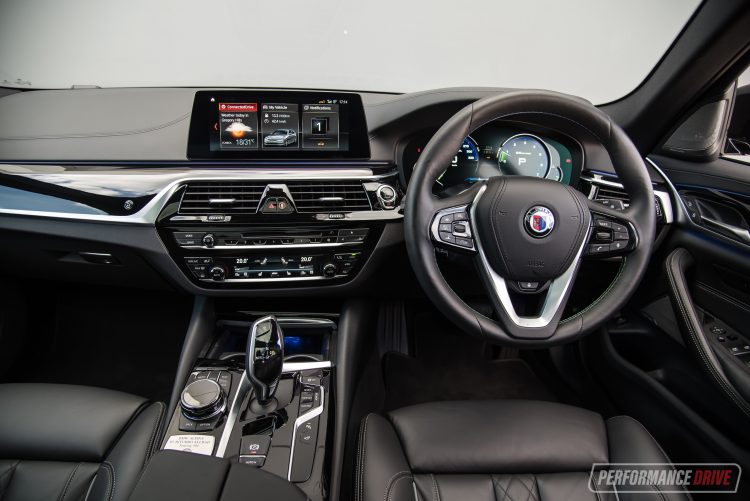 We’ll talk about the powertrain hardware in the drive section below but for now let’s check out this interior packaging. The layout and most of the features and equipment are just like what you’d see in a 5 Series. It’s not until you look a little closer that you’ll see the finer attention to detail, and the amped-up luxury. In the front you have a pair of very comfortable sports seats that are wrapped in soft Nappa leather, with bespoke diamond stitching for the inner sections. Buyers can option for in-built massage functionality for soothing comfort as well.

Most of the BMW iDrive media interface is the same as what you’d find in a BMW. However, this current B5 runs the older 6.0 operating software for the moment while most new-model BMWs adopt the 7.0 layout. But that’s fine by us as the iDrive 6.0 system is easy to understand and the hand controller helps to reduce distraction while driving. Most of the menu layout works on a simple two-axis basis, with navigation to scroll down lists or flick across to different sections. 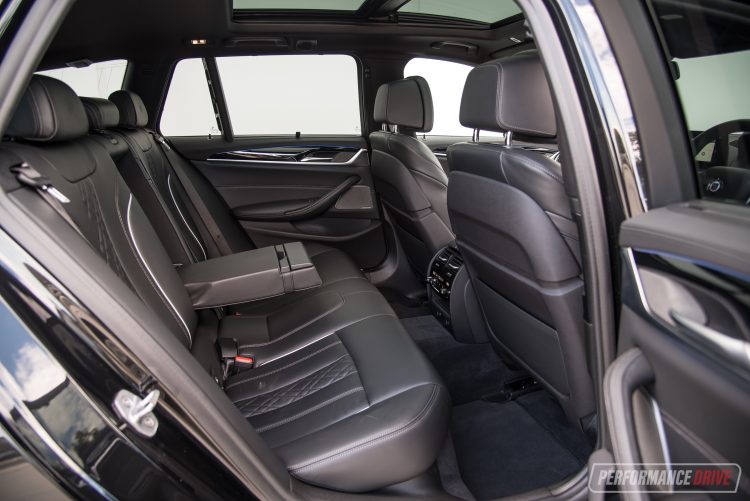 Passenger accommodation and space is abundant, remembering this is based on a large sedan/wagon. Headroom and legroom is free and open in the front and back, and the cargo capacity is rated at 570L, or 1700L with the rear seats folded down. There’s a power socket in the boot area, charging ports and climate control for the rear passengers, and cup and bottle holders and all of that practical stuff as you’d expect.

Alpina vehicles in Australia are backed by a three-year/unlimited kilometre warranty, with servicing required every 15,000km. That’s a similar setup to what BMW offers for its regular models. 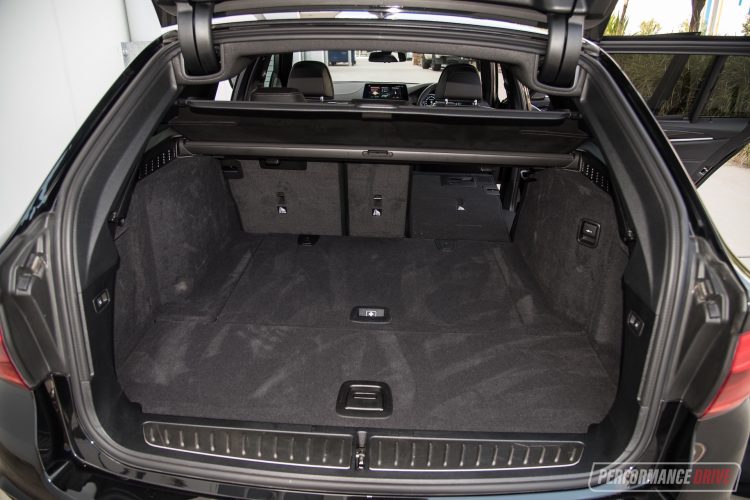 This engine starts life as a BMW ‘N63’-based 4.4-litre twin-turbo V8. Many of the BMW components are replaced though, or recalibrated and retuned to sync with the Alpina way. Alpina uses bespoke twin-scroll turbochargers that run a large compressor wheel, along with a two-stage intercooler setup and completely custom air intake system.

On paper the figures look mighty impressive. Although 447kW, reached at 6250rpm, is huge, it’s the 800Nm that’s available between 3000-5000rpm that really gets your blood racing. Your internal organs are pushed around under only moderate throttle. Give it the full beans and you’re hit with massive g-force. It cycles up through the eight-speed auto like a rapid-fire machine gun. And even though it’s not a dual-clutch auto, downshifts are accompanied by sharp throttle-matching when using the paddle shifters or when in the sport modes. 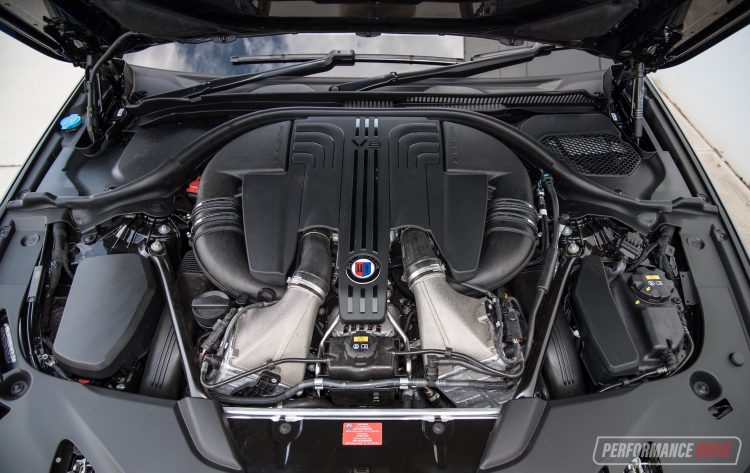 Instead of trying to describe the acceleration further, let’s get to the Vbox-tested figures. Using a private road we clocked a best 0-100km/h in just 3.71 seconds, and 0-200km/h in just 11.65 seconds. The quarter mile also came up in 11.72 seconds at 200.8km/h. These are incredible times for a station wagon. In fact, we’ve seen similar results from supercars. Off the mark the all-wheel drive system lets nothing go to waste, and in-gear thrust makes it impossible not to grin. However, the top end speed is perhaps the most impressive area of all as it just hauls and hauls with no letup.

In true Alpina way, the engine doesn’t bark and crackle loudly, which actually makes it seem even quicker again. Alpina has done extensive work on the exhaust system so it produces a high-quality note. This, in our opinion, is a lesson to other sports car manufacturers out there. It shows that exhaust systems don’t have to be loud to stimulate the senses. You can have a relatively quiet noise that’s still very appealing to the ear. 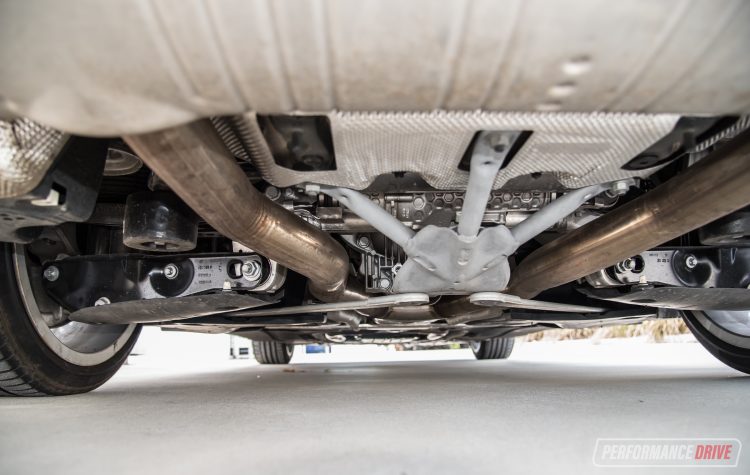 Pop your head under the B5 and you’ll see a full stainless steel system by German company Boysen, complete with an electronic valve control. The valve opens in sport mode and remains closed and more refined in Comfort mode. But, it goes a bit further than that. Alpina has a special engineer that purely concentrates on this department. Unlike some ‘active sound’ systems out there – including some BMW setups – Alpina only works on enhancing the sound higher up in the rev range, and there is no artificial noise sent through speakers in the cabin (hallelujah).

When you’ve finished having fun with all of that power, the B5 really is a wolf in sheep’s clothing. It’s actually more comfortable than a regular 5 Series. That’s because Alpina is fanatical about not only ride comfort but ride refinement. You won’t hear so much of a thud or puff going over bumps, which means cross country comfort, particularly on Australia’s backroads, is sublime. On the Touring wagon you get air suspension at the back too so the ride height is always maintained regardless of the load.

The suspension setup implements adaptive dampers, similar to what BMW offers, and you can toggle through the drive mode selector to find the right setting for the conditions. In Sport Plus mode the ride is the firmest so the B5 is strongly braced for hard cornering, especially managing any body roll during sudden left and right switchbacks. There is customisable mode as well that lets you mix and match the different parameters. For example, you could choose Sport Plus for the engine and transmission and pair it with Comfort for the suspension. 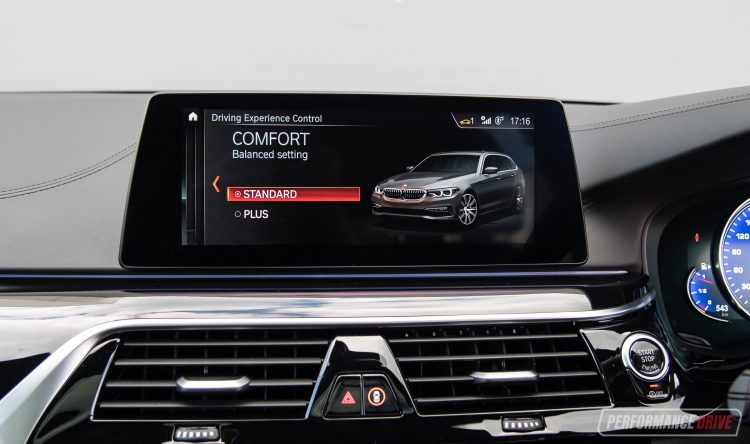 As a bonus, the Alpina B5 adds a Comfort Plus mode which isn’t offered on any BMW. Engaging this activates an extremely absorbent suspension setting. It cushions bumps so well that you hardly feel them. Out on the highway or freeway it can feel a little floaty, especially over long undulating surfaces. In the city though, such as weaving around Sydney’s very poor CBD streets, this setting is most beneficial in our opinion.

In terms of handling, we initially thought it would turn confidently, precisely, and with loads of sure-footed traction, but with some signs of body roll and softness. We were wrong. With the suspension in Sport Plus mode the B5 is agile and surprisingly nimble. You can chuck it between bends and rely on the fully variable all-wheel drive system to catapult you to the next bend. The steering is fluid and progressive, and a little heavier in Sport Plus, with a perfect variable gear ratio for quick turns albeit without becoming too touchy on the straights and in mild bends.

Most of the agility is thanks to rear-wheel steering. The B5’s system, called Integral Active Steering, helps to pivot the car around tighter turns by turning the rear wheels in the opposite direction to the front by up to 2.5 degrees. During higher speeds, the rear wheels are angled in the same direction as the front to improve stability, particularly at high speeds. It all works seamlessly and without you even knowing.

Aside from the monster power and torque delivery, our favourite part of this car is the way it glides around and competently tackles corners. And all without sacrificing ride compliance. We’re not sure how Alpina does it, but it is a wonderful driving experience. 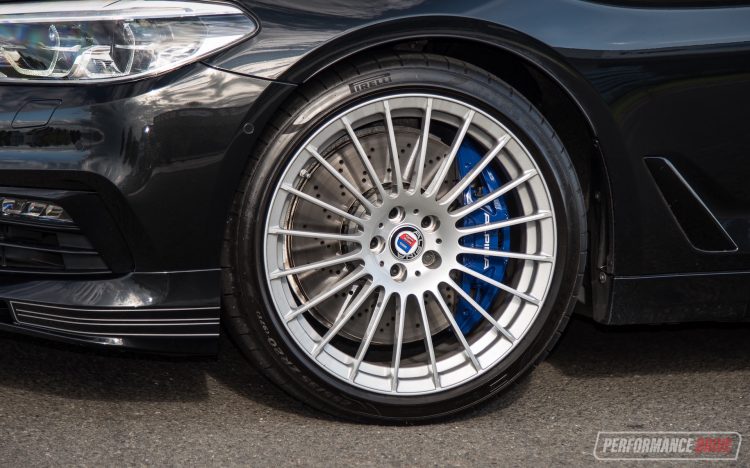 2020 Alpina B5 Biturbo Touring – THE VERDICT

The Alpina philosophy is described as “effortlessness and powerful confidence” – that’s what the B5 Biturbo offers. It is very, very fast, but also calm and collected. Comfort is clearly a paramount focus but we also love the way the B5 eats up twisty mountain roads. It is a consummate master of all things touring. This or an SUV? Don’t be stupid.

CONS:
– A big price for an unfamiliar name (in Australia)
– Alloy wheel design is traditional but needs to move on?