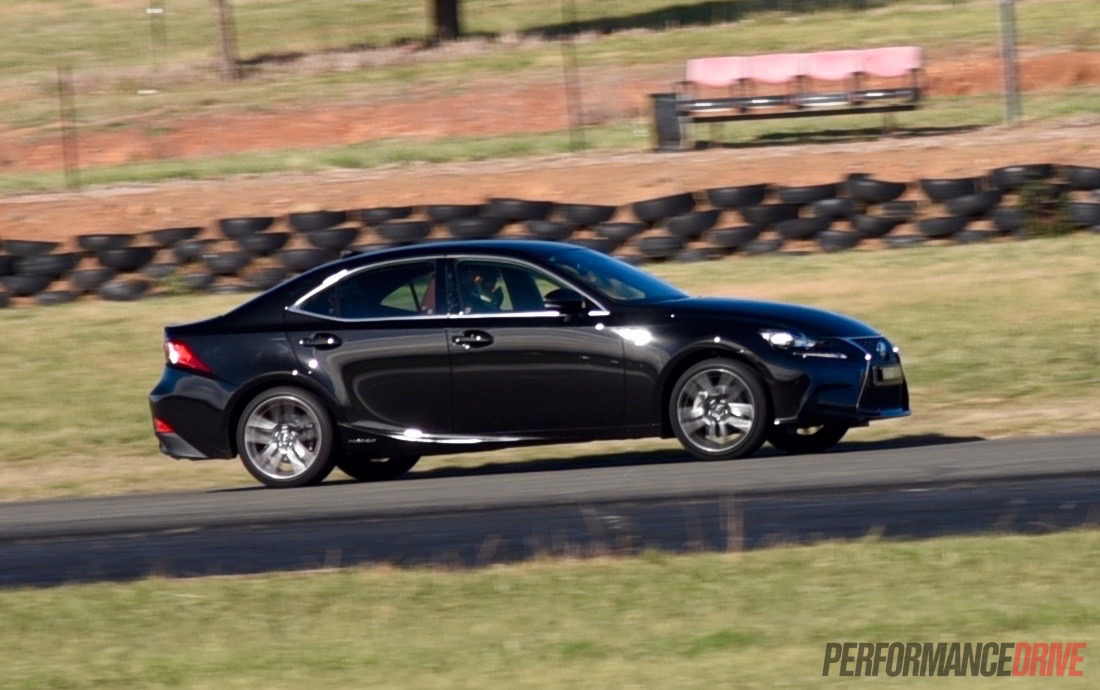 Can you have fun in a hybrid? It’s an answer we’ve always been curious about here at the PD office. So, what better way to  find out than by taking the 2015 Lexus IS 300h F Sport to the track. 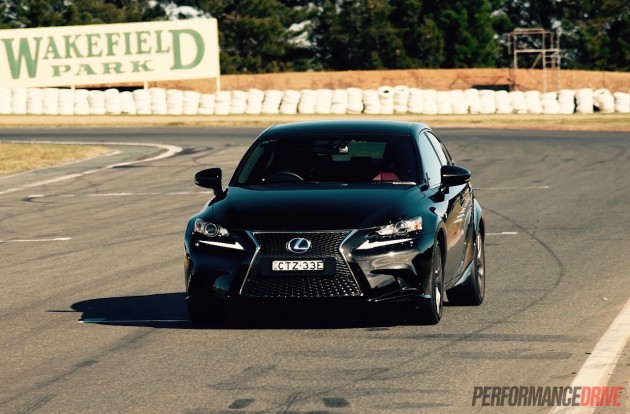 Nobody knows for sure if hybrids will eventually take over the auto world – maybe fully electric will lead the way, or maybe hydrogen? More and more manufacturers are developing their own hybrid systems though and introducing more hybrid options across a wider variety of vehicle shapes and sizes. In other words, we might as well get used to seeing them, at least in the medium term.

Before you get to the supercar realms of the LaFerrari, McLaren P1, and Porsche 918 Spyder, one of the sportiest hybrids currently on the market is the IS 300h F Sport. It’s based on the IS sedan, which is a very good driver’s car in its own right, incorporating Toyota’s renowned Atkinson Cycle hybrid motor technology.

Nestled under the bonnet is a 2.5-litre four-cylinder petrol engine developing 133kW of power and 221Nm of torque. This is sychronised to a 650-volt permanent-magnet synchronous electric motor that produces 105kW and 300Nm. Combined, the power output is rated at 164kW – more than the IS 250’s 153kW but less than the IS 350’s 233kW output.

The 300h is rear-wheel drive, like the rest of the IS range, which is often the governing factor before a vehicle can even be considered ‘fun to drive’. Before power gets to the 2.7:1 differential though it must go through a continuously variable transmission (CVT). CVTs, on the other hand, are not generally regarded as offering any form of fun. So, it’s going to be interesting to see how it performs on the track. 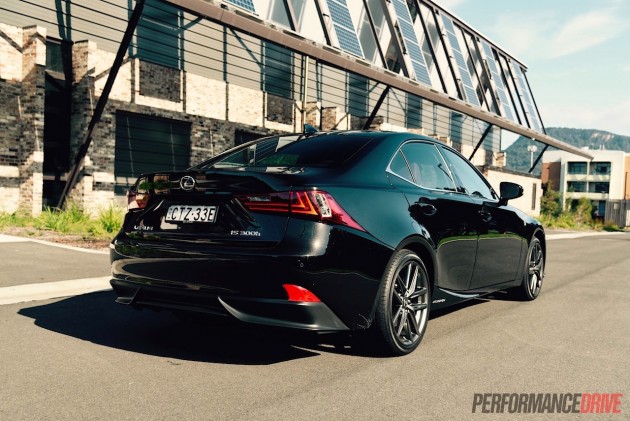 Lastly, the F Sport pack. Lexus offers the F Sport option for all models in the showroom. Enhancements vary from model to model but basically what you’re getting is a smattering of sporty trimmings inside and out, and in the case of the IS 300h F Sport, 18-inch alloy wheels wearing staggered tyre sizes (225/40 on front, 255/35 rear), bespoke sports suspension with adaptive dampers, sport and sport + driving modes, and a special bodykit with air ducts in the front end feeding air to the brakes. With these enhancements, we think the car – and Lexus – is saying to the world; ‘I’m not an outright sports car but I can promise and support a certain amount of fun behind the wheel’.

We’re at Wakefield Park near Goulburn, NSW, as part of GP EXEC’s private track day. If you’re interested in testing the limits of your car or simply want to enjoy some spirited driving in the safe environment of a track, be sure to book now for the next date (July 21). Spots are filling up fast. Prices, booking details, and future drive day dates can be found at the GP EXEC website. Let’s hit the track and see what’s what. 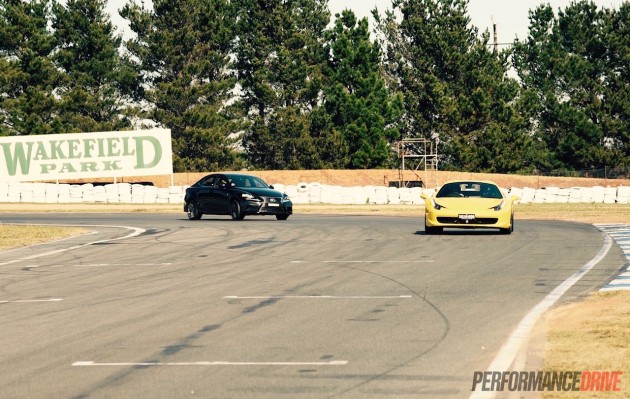 Engine: Initial power delivery and torque out of the pit lane is not going to slam your head back into the seat. Although, the 300h does build up speed surprisingly quickly. It can catch you off guard too, as you tend to think you’re not going very fast but when you take a look at the speedo, you’re actually galloping along with pretty serious pace. For us it’s the CVT gearbox that’s the main letdown in terms of acceleration performance. It takes away the build up of speed and takes away the feeling of acceleration; instead of multiple gears taking you on multiple waves of g-force, it’s just one monotonous gear that holds for eternity.

Lexus has, rather ambitiously, fitted up paddle shifters behind the steering wheel. However, after playing around with all of the driving modes and slotting the gear lever over into ‘manual’ mode, we couldn’t figure out what the paddles actually do. There is no manual-like shifting available, and active downchanges are totally nonexistent. As a test, we put it into ‘4th gear’ and did a lap and it behaved exactly the same as if it was in ‘D’. We can’t come to any other conclusion about the paddles except to say they are only there for gimmicky marketing purposes. Which is a shame as the powertrain feels like it has enough oomph to provide decent fun. We timed 0-100km/h in 8.2 seconds. This sort of time only just misses out on our 8.0-second benchmark that we usually say is required for a vehicle to be considered properly sporty.

Braking: The brakes aren’t any different on the F Sport to the regular brakes on the IS 300h, sharing the same size discs as those on the IS 250 (296mm front, 290mm rear). However, as mentioned, the more aggressive F Sport front bumper bar has large openings to guide air in to cool the discs. After a number of laps, the IS 300h performed brilliantly. We were genuinely surprised at how well the heavier IS 300h pulled up time and time again (IS 300h 1720kg vs IS 250 1645kg). The regenerative braking function obviously helps to slow the car and reduce pressure on the brakes, but the pedal remains firm and the stopping force stays consistent. 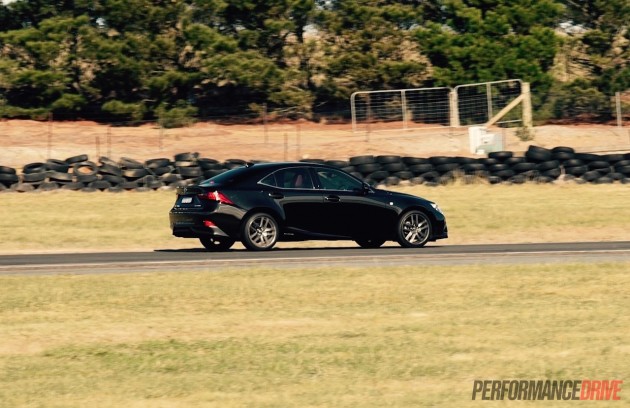 Handling: One would probably expect a hybrid to be too heavy and cumbersome on the track. We thought the same. But in fact the IS 300h’s centre of gravity is lower than in the regular IS models. Pair that to the firm F Sport suspension and you’re left with a very flat-handling vehicle. It really does rail around corners with no major body roll. The front-to-rear weight distribution is more neutral in the IS 300h thanks to the placement and weight of the batteries and electric motor setup. The front end does possess a slight vagueness when you initially turn in with speed, but coming into and leaving the apex there is a nice level communication, similar to the regular IS. You can throw the weight around a bit and enjoy a small degree of oversteer if you try hard enough (Scandinavian flick), but overall the car is very balanced and committed in the corners.

The verdict: To our surprise, we really enjoyed our time with the IS 300h on the track. It’s not as lively or as playful as the regular IS models, but you can definitely have some fun out there and post some decent lap times while you’re at it. With very neutral handling and power delivery, it is easy to post consistent lap times too. Our best was 1:18.2. This puts it just behind the Hyundai Veloster SR Turbo manual (1:17.5) on our Wakefield Park lap time leader board.

Perhaps the best part about the car is the fact you can drive home from the track and enjoy an official 4.9/100km average fuel economy. We hope Lexus plans a proper six- or eight-speed auto for future sporty hybrid models as it would significantly enhance the driving experience in our opinion.