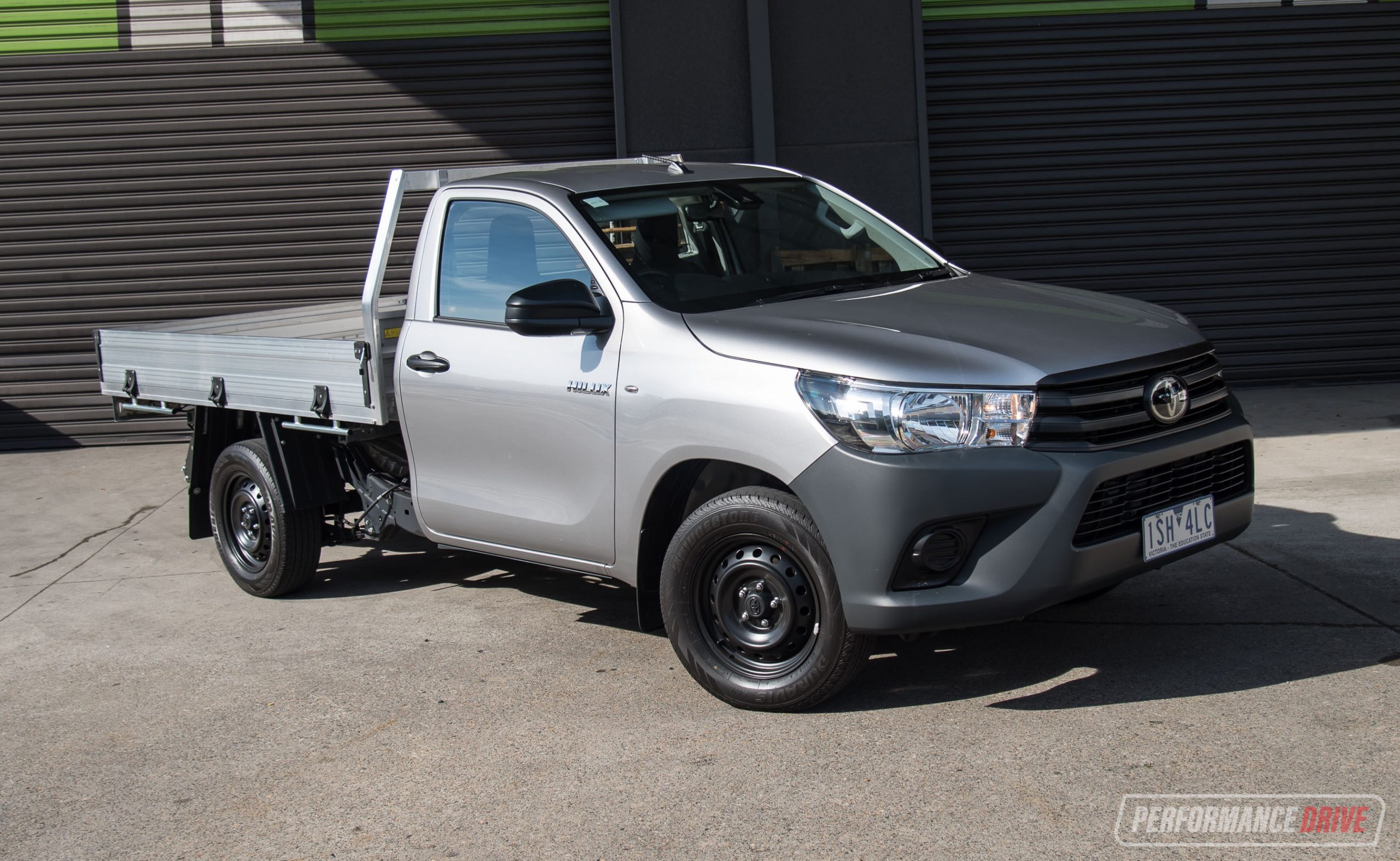 The ever-famous Toyota HiLux is a ute that covers many bases in the new car market. One of its most important is for use as a workhorse, supporting businesses around the country that keep the Australian economy going. Seemingly unbreakable, it’s no wonder the HiLux is constantly Australia’s number one selling vehicle, month after month. 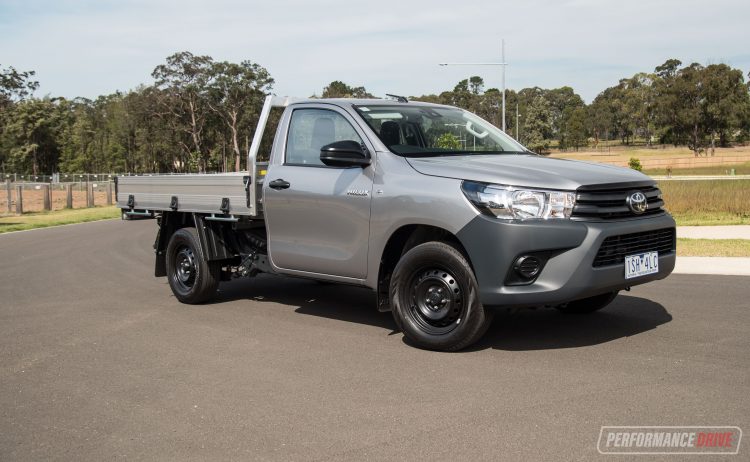 The second half of 2020 saw the 2021 update for the entire HiLux range, including the entry-level WorkMate. Here we’re throwing on our King Gees and testing the HiLux in its rawest form; the WorkMate 2.7 petrol 4×2 single cab-chassis, with the five-speed manual. 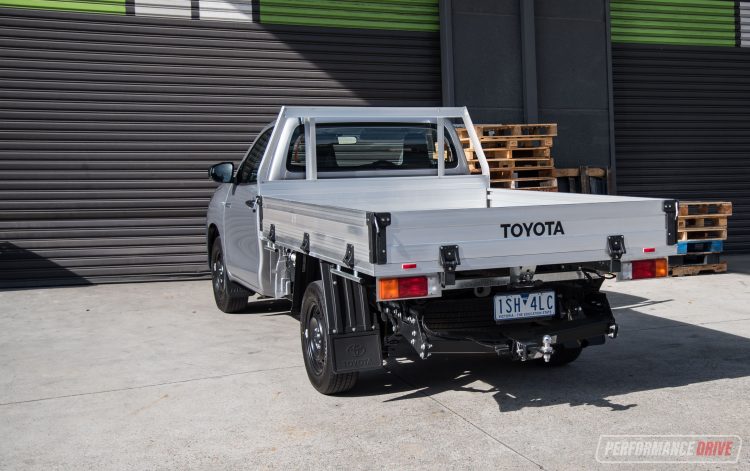 Even though the WorkMate is made to be rough and ready, Toyota has taken the lead to ensure tradies are kept just as safe as other road users by including important safety features previously excluded. The features are bundled into what’s known as the Toyota Safety Sense suite. It means every HiLux gets forward collision mitigation with pedestrian detection, lane departure warning with active lane-keeping aid, speed zone and road sign recognition, trailer sway control, and distance-controlled cruise control. This is fantastic that Toyota took a stance on this – some luxury makes still don’t offer some of this as standard.

The WorkMate also gets an 8.0-inch touch-screen for 2021, with control knobs so it’s easy to use with dirty hands. It offers Android Auto, Apple CarPlay and Bluetooth connectivity, while a 4.2-inch multi-information cluster display, daytime running lights, auto hill holder, a full-size spare wheel, auto headlamps, and a vinyl cabin floor come standard. 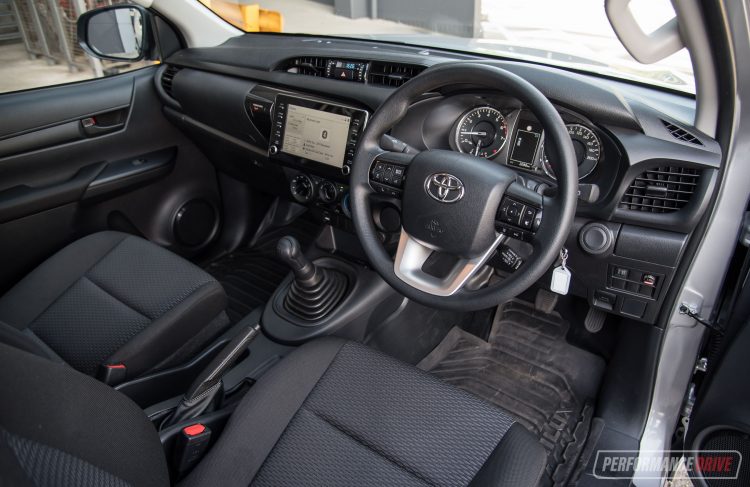 Revised exterior styling gives off a stronger presence. There is a large trapezoidal grille that dominates the front design and integrates more horizontal elements to emit a wider, more planted expression. New headlights are smaller for a more aggressive impression. Unfortunately, these changes are reserved only for the SR and SR5 and above. For the WorkMate there are some new four-bulb headlights, and that’s pretty much it.

The interior is still designed with durability at front and centre. You get black fabric seats and vinyl floor coverings to provide the toughness demanded from daily commercial use. As expected, there aren’t a lot of seating adjustments available, so long drives will start to get to you if you don’t have the ‘standard’ body shape. There is also no telescopic adjustment for the steering wheel, only tilt adjustment, which means it can be difficult to find a nice driving position.

Unlike the competition, servicing intervals are scheduled often, at every 10,000km or six months, which means time away from jobs. But Toyota now offers the market-standard five-year, unlimited kilometre warranty. 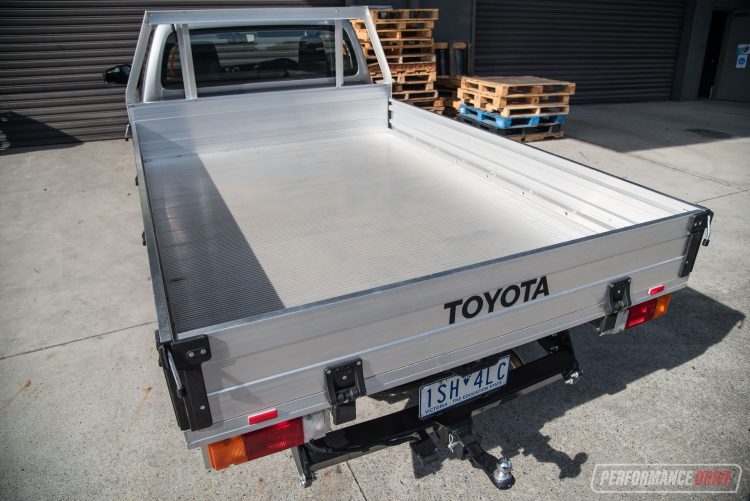 On the road, the large four-pot petrol engine produces 122kW of power and 245Nm of torque. It won’t win you any drag races, but will chug along up to speed without trying too hard. Only when a heavy load is on the back, or if you want to overtake quickly, will you find the power is slightly lacking. The engine doesn’t feel like it enjoys revving up past 4000rpm either, which is where the maximum power output occurs, at 5200rpm.

Lots of time spent in getting up to speed goes into changing gears. It’s not a modern short-throw six-speed manual either. It’s an old but reliable five-speed setup. Being only a five-speed means the engine revs are high at highway speeds, which does not help with interior sound levels or fuel economy. 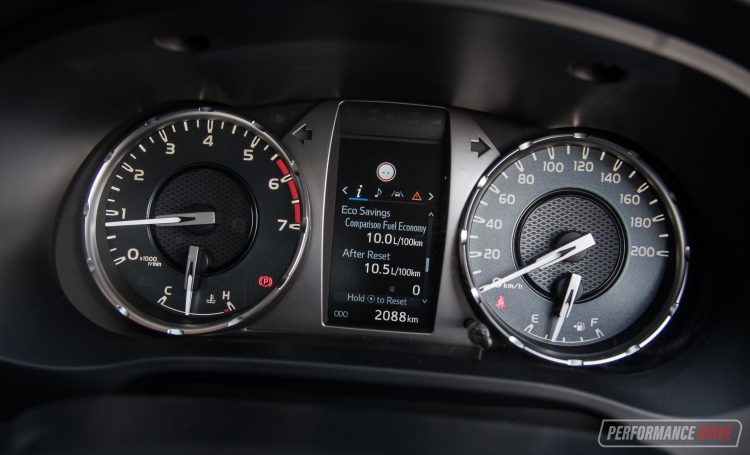 And speaking of fuel use, the official fuel consumption figures rate the HiLux at a guzzling 11.1L/100km. And our average, which included a mix of city and highway cruising, was about the same. Highway driving at no more than 100km/h or even 90km/h seems to be its sweet spot, where it can return around 10L/100km. This is one of the worst traits about the HiLux if you get the 2.7L petrol engine. And comparing to its rivals, the official average is one of the highest – though, 0.3L better than the 2.4L petrol Mitsubishi Triton. The fuel tank holds a substantial 80 litres, which means fewer spur-of-the-moment meat pies from the petrol station.

To be true to its tradie-tough strength, leaf springs and shock absorbers are at the rear, and double wishbones and a stabiliser bar at the front. It can carry a hefty 1225kg of cargo in the tray. But this is less than the equivalent Ford Ranger’s 1259kg, the Isuzu D-Max’s 1305kg, and the Mazda BT-50’s 1315kg. Though, they are all more expensive. 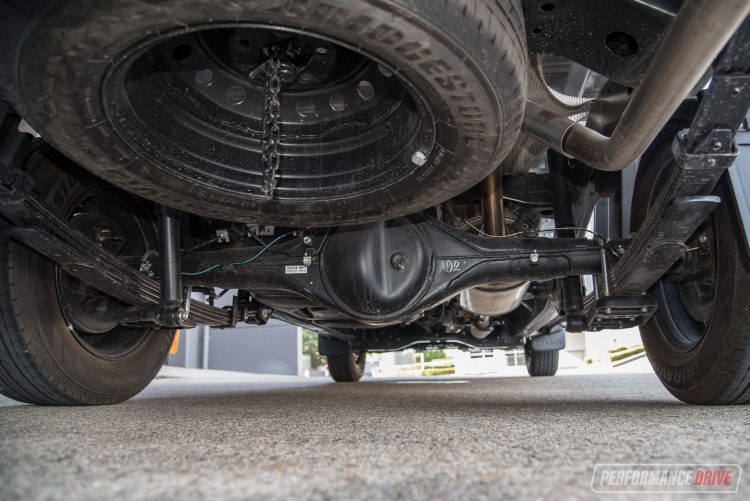 In order to tolerate those loads, it is a given that the ride is extremely bumpy. To the point that you cannot sip a bottle of water without spilling it – no exaggeration. We’d recommend getting a more comfortable ute if you really don’t need these payload strengths. If you need to tow, the WorkMate maxes out at 2500kg, but can pull up to 3500kg if you opt for a 4×4 model.

Th steering feels strong and weighted to give maximum control when carrying loads. It still goes with the old rack and pinion, hydraulic power steering setup. But it is somewhat refreshing these days, given most cars feature less communicative but more fuel efficient electric steering setups.

Overall, it’s an easy and free-spirited drive. There’s nothing intimidating to deal with, which will no doubt help to reduce the chances of fatigue after long hours behind the wheel. And it handles well for its class, although the industrial-strength (and size) tyres are the weakest link. 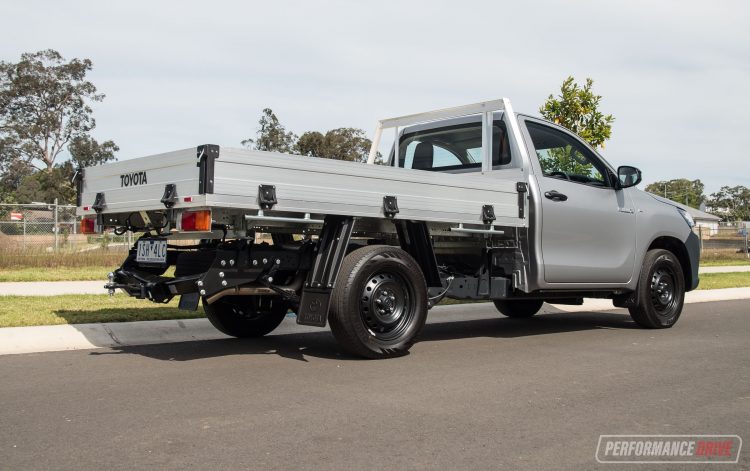 It’s hard to go past a Toyota HiLux for strength, reliability and peace of mind when it comes to the demands of running a business, or performing a trade. As the name suggests, the HiLux WorkMate is your mate on the job, thanks to its hard-wearing, commercial-grade focus. And with the 2021 model update, we think it’s fantastic that Toyota now includes some really important safety features, even in the lowest-priced variants like this.

PROS:
– Toyota Safety Sense (with radar cruise control) standard across the board
– 8.0in touch-screen with Android Auto/Apple CarPlay as standard
– Feels unbreakable and ready for work
– 5-star ANCAP safety rating

CONS:
– High official fuel consumption of 11.1L/100km, for what it is
– 10,000km service intervals
– No rear-view camera for cab-chassis models
– Extremely bumpy ride with no load