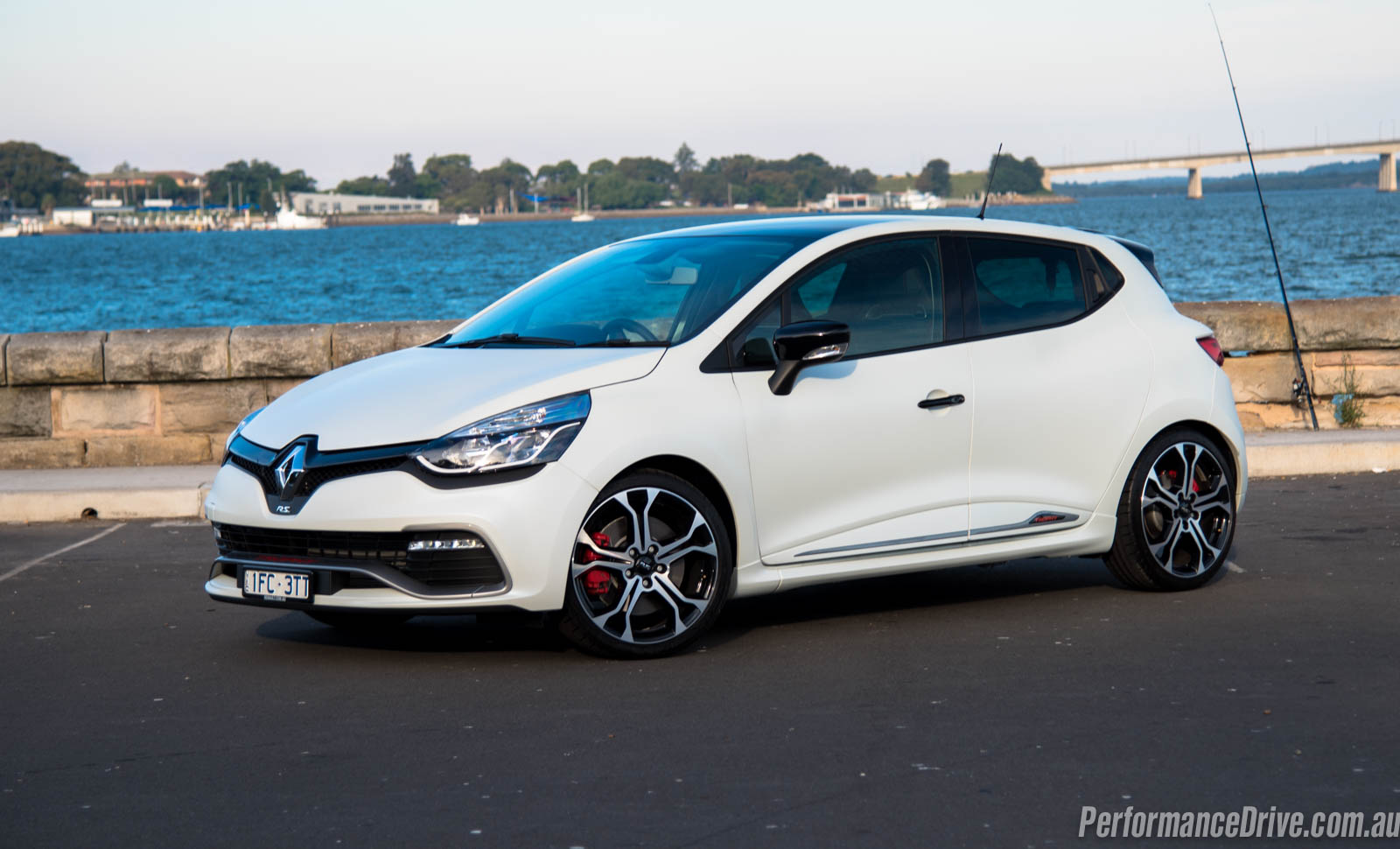 The Renault Clio R.S. 220 Trophy has arrived on Australian shores, and Renault is billing it as the most hardcore Clio that money can buy. Only 220 examples are being shipped to Australia, and judging by the Clio R.S.’s success world-wide, they’ll soon be gone. 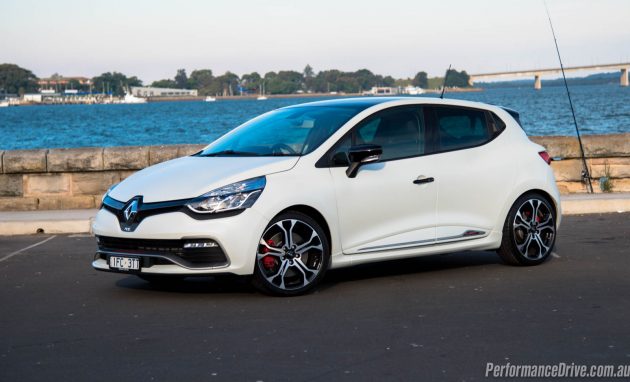 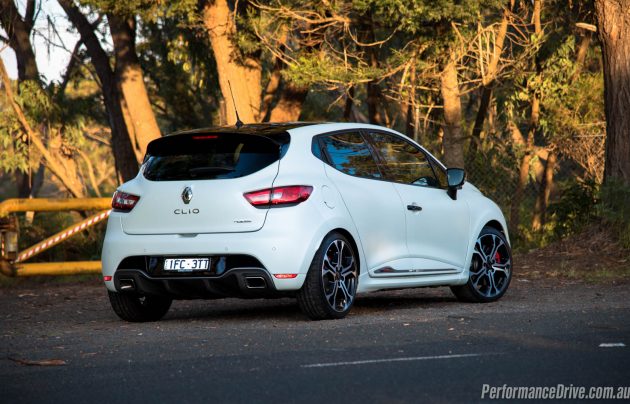 Our review car here is covered with the optional and exclusive to R.S. 220 ‘Frost White’ (matte) finish contrasted by a gloss black roof, mirrors and door handles. Style is of course in the eye of the beholder, but it’s hard to ignore the Clio when finished in this fashionable blend.

The majority of the special touches reside inside, where you’ll find heated leather sport seats with red stitching and ‘Trophy’ embossing, chrome and faux carbon-fibre accents, leather-trim steering wheel, and unique gear lever with R.S. badging. There’s also red seat belts which are sure to excite the 13-year-old hiding away in all of us, and the chunky steering wheel adds to the 220 Trophy’s muscular appeal. Looking behind in the side mirror, you can catch a glimpse of the bulging rear wheel arch that reminds you of its wide and low stance and performance intentions.

The R.S. 220 Trophy is priced rather high for the compact hot hatch segment, but it does come equipped to $40k standards. There’s climate control, cruise control, auto lights and wipers, a rear-view camera with sensors, stop/start function, some storage pockets, and a very shallow cup holder in the console. A 7.0-inch infotainment system with Bluetooth and navigation brings all on-board entertainment together, and it includes a cool ‘R.S monitor’ with performance readouts.

The front of the cabin is cosy, no doubt, but not cramped. There’s adequate headroom, and ensuring no rear passengers ask you to sacrifice legroom, it’s a comfortable place to be. The rear of the cabin however is still a Clio, so anyone above the age of say eight will be uncomfortable on longer drives. We also find the driving position not as natural as what’s offered in the competitors. All Clio hatch variants offer 300L of boot space with the rear seats up (1146L with them down). In reality, this isn’t much, but the boot space is deep and can be suitable for taller items. 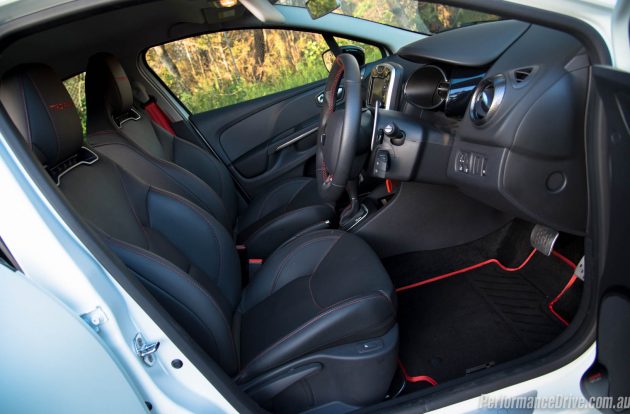 So, could you drive Renault’s smallest, most hardcore, track-bred model to and from work everyday? Sure, so long as your back is made from rubber and has its own shock absorbers.

Ultimately, it is still a Clio, which means you’ll have no problem darting through tight city streets and sliding into small parking spaces. Visibility isn’t a strong point, with bulky seats and even bulkier C-pillars obstructing what little rear visibility there is. A bit of guess work is required in some situations, even with the rear-view camera.

You will want to consider investing in a chiropractor, as the R.S. 220’s chassis is extremely firm, almost too firm for Australian conditions. It’s a bitter-sweet thing though because as we’ll get to soon, this car is a real hoot in the bends and out on the open road.

The headline facts for the Clio R.S. 220 are impressive, with Renault squeezing out an extra 15kW and 40Nm from the 1.6-litre turbocharged four-cylinder that powers the regular R.S. 200 models. Renault achieved this through installing a larger turbocharger, updating the exhaust system (with bi-modal functionality), adding a new air intake and a new ‘torque boost’ function for third and fourth gears. 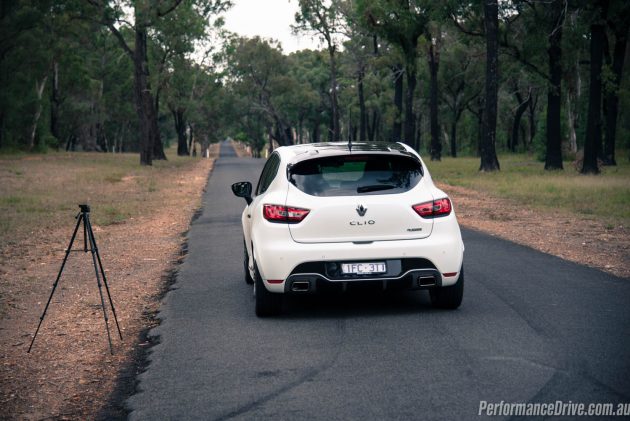 The end result is exciting and a noticeable improvement over the regular R.S. 200, particularly with the added torque found in the mid-range. Driving the Clio, you’re aware there’s a turbo working away, but it in no way spoils the drive with excessive turbo-lag or torque steer. The straight-line performance doesn’t really get the heart racing, but try to carry that pace through a bend and the R.S. 220 comes alive. In-gear acceleration and pull-through is also where the R.S. 220 really excels.

There’s no mechanical limited-slip differential. Instead, Renault’s R.S. differential manages power between both front wheels electronically. It can occasionally crash the party at the wrong time. Hold the R.S. button down and the traction control is slackened right off and the little Clio’s playful personality is all in your hands, offering extraordinary stability and even lift-off oversteer if you’d dare to explore.

The revised exhaust system has given the little Clio a meatier, more aggressive note throughout the rev range, complete with pops and gargles which add to the character and driving excitement. Under full throttle the cabin is filled with a whooshing induction noise that makes it sound like you’re piloting something significantly more powerful. It’s charming.

Renault engineers also turned their heads to the Clio’s steering ratio, bringing it down from 14.5:1 to 13.2:1. Translated out of engineering terms, it means a super-responsive steering rack. You notice this even at low to moderate speeds, with the front end feeling very alive and ready.

When it comes to responsiveness, the R.S. 220 behaves like it’s driving on rails even with the slightest of steering adjustments, offering pure feedback to the driver. It allows you to nail an apex precisely to the millimeter, and from there the 18-inch ‘Radicale’ alloys wrapped in 205/50 Michelin Pilot Super Sport tyres provide an insane amount of grip. 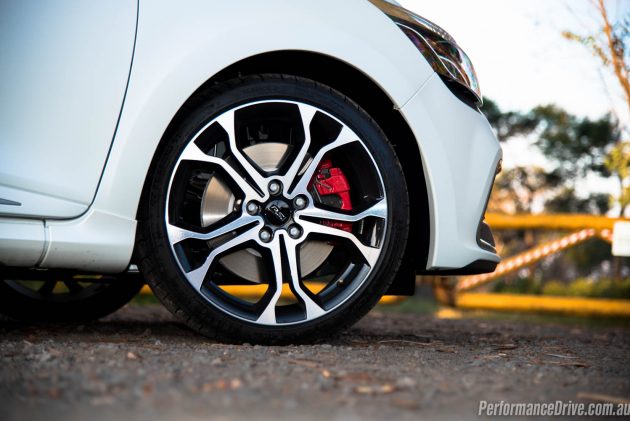 The six-speed EDC dual-clutch auto offers the smooth and swift shifts that you come to expect from a dual-clutch transmission. Renault claims to have reduced shift speeds by 50 per cent, but it still appears to lack the responsiveness of a VW-derived DSG; it can lurch between shifts and roll back on an incline (so does VW’s DSG just for the record, but not as much). It’s a definite improvement from the EDC offered in previous R.S. models.

We’re thankful to the engineers at Renault for a lot of the changes, however, one of the R.S. 220’s trump cards can be found in its revised chassis. Renault has lowered and stiffened the chassis, by 20mm front and 10mm rear, as well as added firmer shock absorbers, and strengthened the rear twist beam by 40 per cent. The stiffness, as we’ve discovered, can prove tiresome when commuting, but has created an absolute road-weapon when taken to the limit.

Renault claims an economy figure of just 5.9L/100km. We’re not convinced this is ever actually achievable. No matter your driving style or how careful you are with the loud pedal, the 1.6-litre turbocharged unit has a strong thirst. It had us returning figures in the area of 8.5L/100km in mixed conditions. If you fall victim to the temptations to have a little fun, be prepared to watch that figure climb nearer to 10s.

Most of the time, when passion is involved, logic is straight out the window. Much the same applies in this case; there’s a lot of logical reasons to steer clear of the R.S. 220, and for some buyers, sensibility may outweigh all else. However, buyers and those who actually understand the Clio R.S. won’t have a second thought when it comes to buying the 220. That buyer doesn’t care about the stiff ride, or the lack of space in the back. As long as it’s properly engaging to drive and hugely capable, that’s all that matters. This little Clio embodies countless aspects of what we petrol heads define as a fun drive, and much like cars like the Toyota 86 and MX-5, the Clio R.S. makes driving excitement accessible to the masses.