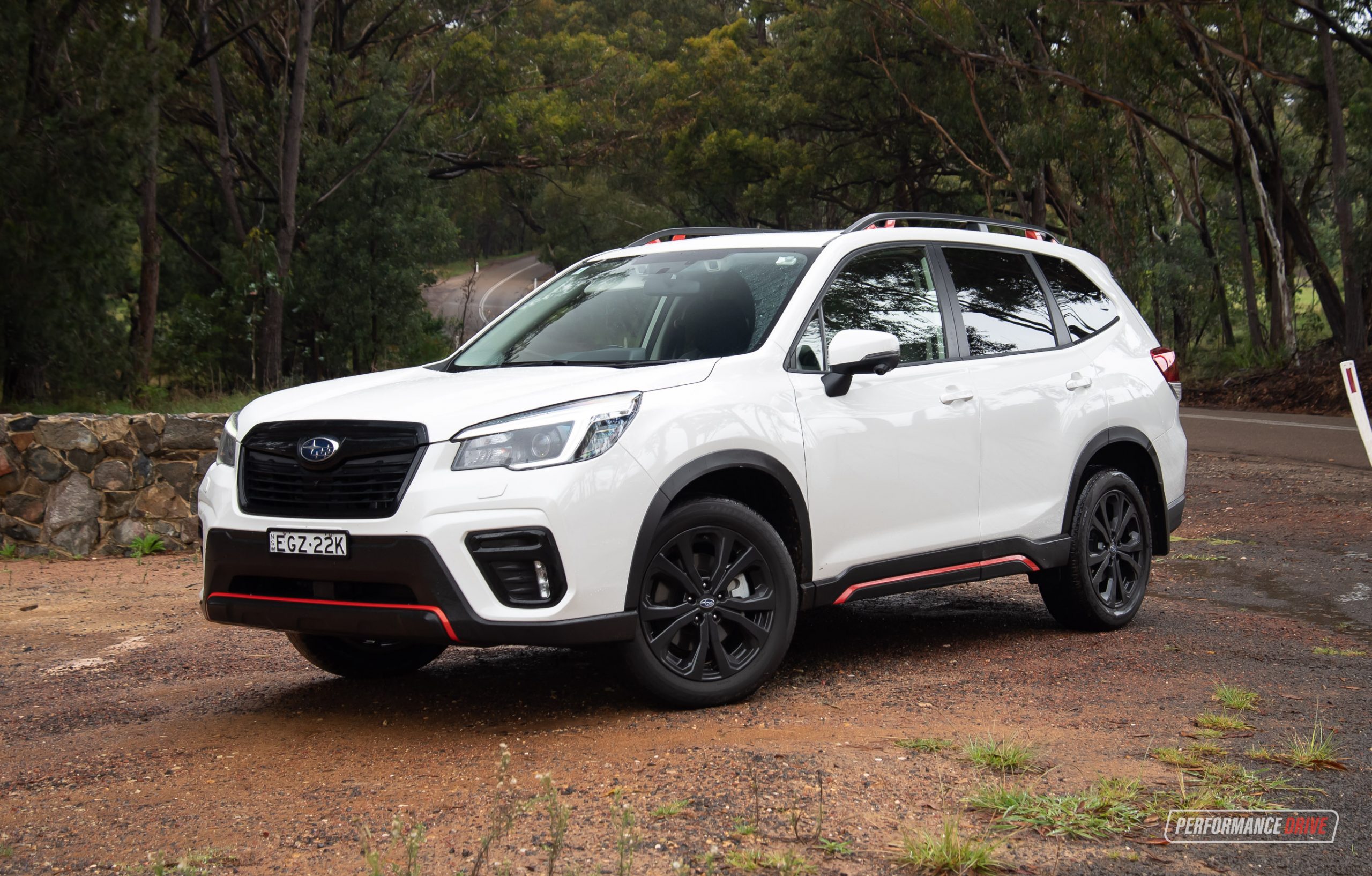 Although we’re all still saddened by the demise of the legendary Forster turbo, the 2021 Subaru Forester Sport tries to fill that void with family-friendly practicality, dependable ruggedness, and a pinch of energetic attitude. Is that enough to win back our hearts? Let’s take a look. 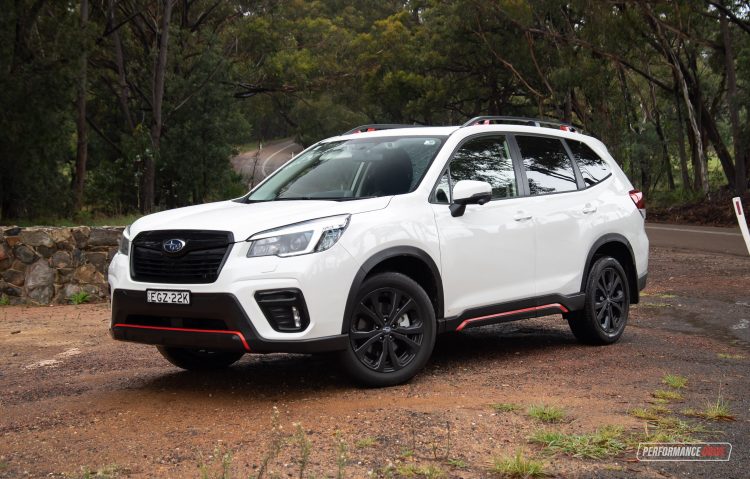 The latest-gen Forester was first launched in 2019. It’s still a relatively new vehicle. And by that we mean it comes with the latest gadgets, safety technology, and offers respectable fuel economy and performance for what we all expect from both Subaru and the current market standards. It also rides on the company’s current Subaru Global Platform, which has just be used for the foundations for the all-new Outback. In other words, the platform is still reasonably modern and current as well.

So what about this Sport variant then? Well, the extent of ‘sport’iness pretty much ends at dark alloy wheels and some contrast stitching inside. However, priced from $41,990 and coming equipped with almost as much gear as the flagship $43,990 i-S variant, it is very good value for money. That price point also stacks up well against most of the equivalent-spec rivals.

* Figures as tested by PerformanceDrive on the day, only braking result is based on previous test of 2.5i. Factory claims may be different 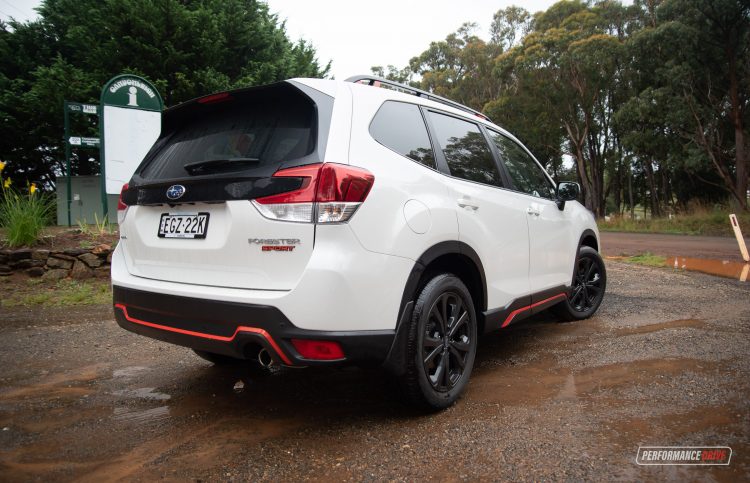 There aren’t many mid-size SUVs that are more practical than the Forester. And we mean that in every way. Subaru has done a great job with arranging the controls and storage options, as well as ensuring every passenger is given as much room as physically possible from its underlying proportions. There’s a decent-size centre console box, bottle holders in all doors, twin cup holders front and rear, and plenty of spots for phones and other items.

Subaru’s 8.0-inch touch-screen is a big improvement over its previous systems, but it has been around now for a few years. The colours and graphics are pleasant and inviting, and the menu functionality is mostly intuitive except for some areas. Android Auto and Apple CarPlay are standard, along with sat-nav, digital radio, and a six-speaker sound system. It’s a shame the Sport misses out on the Harman/Kardon eight-speaker unit featured in the 2.5i-S and Hybrid S. 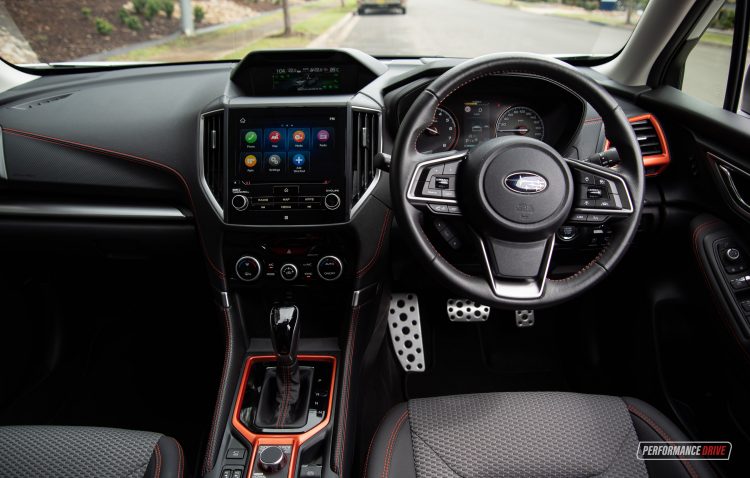 Subaru’s smart side- and front-view camera system does come standard, which is great during off-road driving and when trying to negotiate tight car parks. The views are displayed on a somewhat pokey 6.5-inch screen positioned at the top-centre of the dash.

Exclusive to the Sport variant is a special upholstery consisting of grey water-repellent cloth for the seats (both front seats are power adjustable), orange stitching, and orange highlights for the climate vents and other bits and pieces. Piano black is also used in some areas, and the boot receives an LED light. An electric sunroof is also standard on the Sport, adding a touch of luxury. Are these enhancements enough to earn the Sport badge? That’s for you to decide, but for us, at least these changes don’t come at an unreasonable cost. 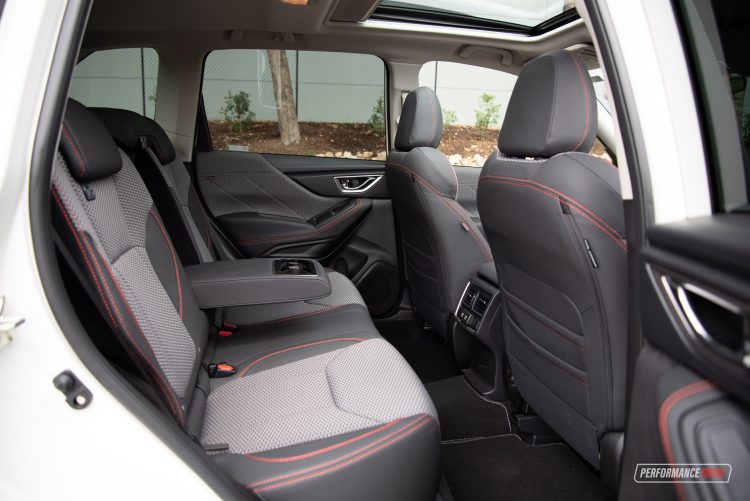 Safety is one of Subaru’s key focuses, and so the Forester comes heavily packed with the company’s latest Vision Assist suite with EyeSight technology. It includes lane-change assist, rear cross-traffic alert, autonomous front and rear braking, adaptive beam highlights, and the front- and side-view monitoring system mentioned above.

It’s no surprise the Forester has been awarded a five-star ANCAP safety rating. It is worth noting the Sport does come with all safety systems available to the Forester, while less variants miss out on some features. Also worth noting, the Forester offers outstanding visibility thanks to its tall windows and upright cabin orientation, and thoughtful placement of pillars. In fact, we think this area is a real standout for this class and should be a big attraction to those wanting that raised-up SUV experience.

Boot space is particularly impressive as well for this class. Not only is 498L above the average for the segment, the convenience of a 12V socket and fully-flat folding rear seats adds to the appeal. When the rear seats are flipped down the boot grows to 1740L. Despite the capacious effort, Subaru provides a full-size alloy spare wheel under the boot floor as well. Yes, it is a bit of a pain if you happen to suffer a flat tyre while on a road trip, as you have to empty all of your luggage out to access the spare. But, at least the flat tyre will fit back into the cavity afterwards – unlike some space-saver arrangements. 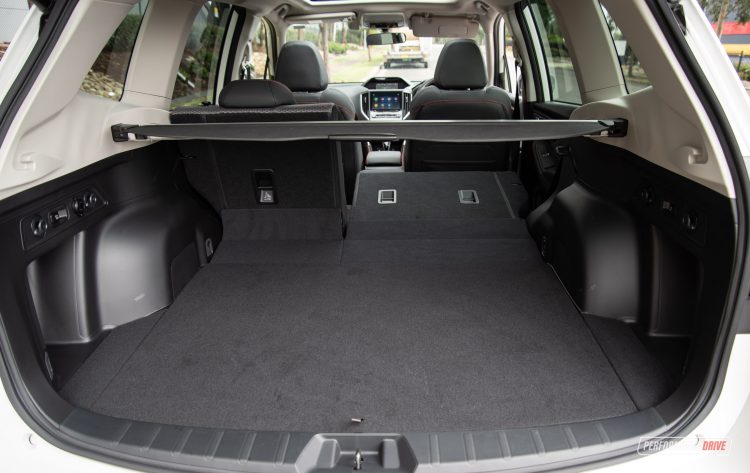 That impressive outward visibility, let alone the support from the external camera system, makes the Forester one of the most unintimidating vehicles to drive in this class. Both the steering wheel and seat offer a wide range of adjustment, allowing you to find a natural and ergonomic driving position, and everything feels like it is operating in real-time. No, we didn’t forget to take our medication this morning. What we mean is some vehicles in this class can feel overly automated, secluding the driver. For example, the Forester’s electric power steering system feels mechanical and provides hydraulic-like feedback. The gear selector is also very mechanical. Even the indicator stalk clicks and clunks.

Around town this raw characteristic carries through, as you always feel confident about where the vehicle is on the road and where the wheels are placed. Parking is a breeze, partly thanks to the side-view camera system (no excuses for scratching the wheels), and again the tall windows give you a full view of the surrounds. Ride comfort is rubbery and secure, and the class-frightening 220mm of ground clearance means speed bumps and sharp driveway entrances are never a concern. 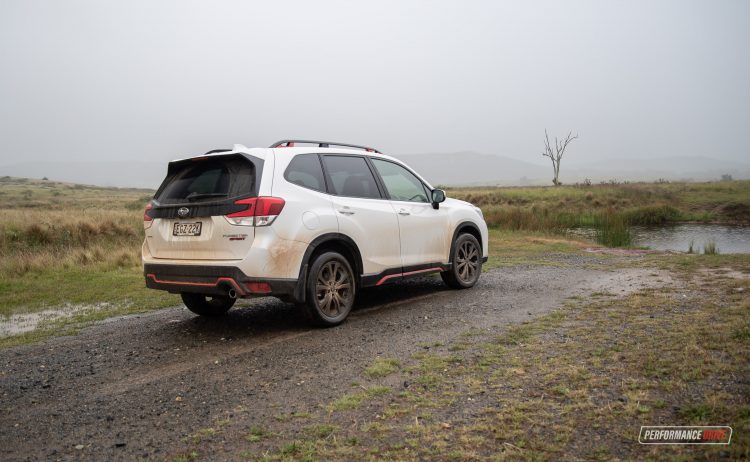 Unlike many rivals, the Forester can actually venture off road, to some extent. We had fun exploring rural conditions in the rain during our test and the Forester never seemed out of its depth. Obviously you shouldn’t expect it to be able to tackle hardcore 4×4 tracks, but it has no trouble clambering over wet and rutted grassy tracks, very rough dirt roads, and pushing through moderately deep puddles and flowing causeways. Interestingly, it’s in this setting where the Forester is very popular – we noticed a large proportion of SUV clusters in rural areas are made up of Foresters, aside from the swarms of utes and Toyota Prados and LandCruisers.

On the tarmac and out on the open road, Subaru’s current platform provides solid and reassuring handling, with a good balance of body control and comfort. It steers in eagerly and holds its line quite well, and mid-corner bumps tend not to upset directional stability. We guess the tallish 225/55 tyres are catered more to mixed conditions as opposed to being weighted on sportiness, but given its intended purpose is mostly about versatility, the Forester Sport is a great all-rounder. 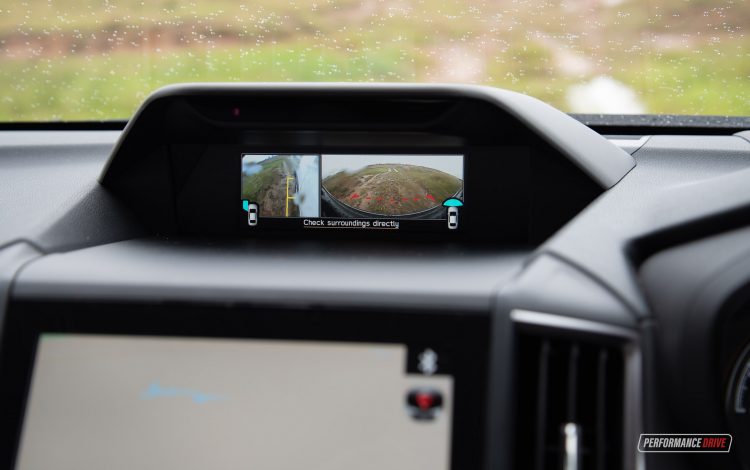 Letting down the sporty appeal is the CVT transmission. These types of transmissions are very boring and do nothing for spirited drivers. They also ensure the engine moans and groans at every possible chance. In saying that, Subaru has been making tweaks and further evolving the CVT so as to reduce the regularity of such traits.

During highway cruising you wouldn’t even know it has a CVT. The engine just hums along and the revs are kept low. There’s also artificial gears, or steps, built into the unit so it can feel just like a normal automatic, depending on the driving mode selected and the driving conditions. During overtaking the powertrain does still have that annoying revving characteristic. And it does not settle down, like a conventional auto as it changes up gears. 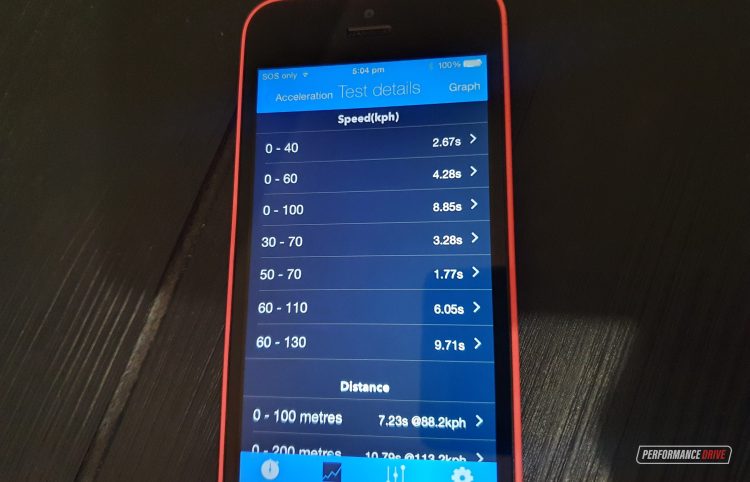 Performance is quite good, though. The last time we tested the petrol Forester, back in 2019 when this generation arrived, we saw 0-100km/h come up in 9.76 seconds. That’s not bad for a naturally aspirated four-cylinder, with constant all-wheel drive.

We did run some tests with this Sport variant with the Vbox just to remind ourselves of the stats, and, surprisingly, it crossed 0-100km/h in a best of 8.85 seconds. We didn’t bother taking our camera gear to our usual private road where we do these tests, as we assumed it would score similar figures as before. So unfortunately we don’t have a video to show you. 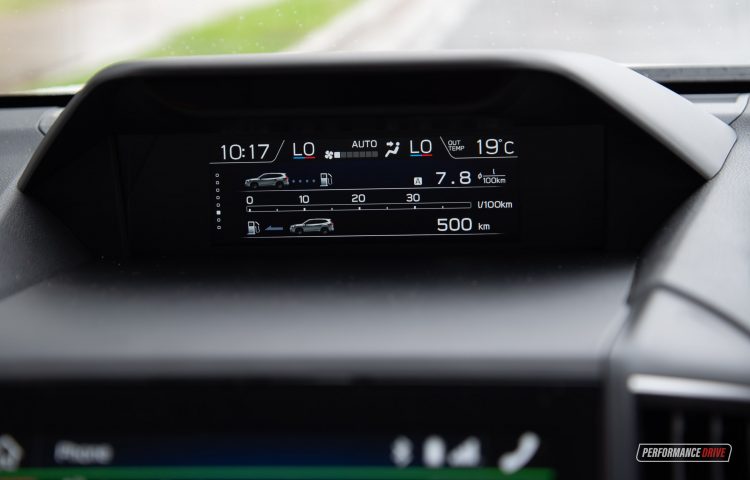 One of the main reasons for the existence of the CVT as a concept is fuel economy. These transmissions are very efficient at distributing and making optimum use of the engine’s outputs. So, even though it might not seem like it when driving, the engine doesn’t need to work hard to get the job done.

According to the official ADR specs the combined cycle fuel consumption is 7.4L/100km. During our week of testing the trip computer displayed an average of 7.8L/100km. There is an automatic stop-start function that switches the engine off at the traffic lights, but we think it’s a bit clunky. Fortunately, you can turn it off. 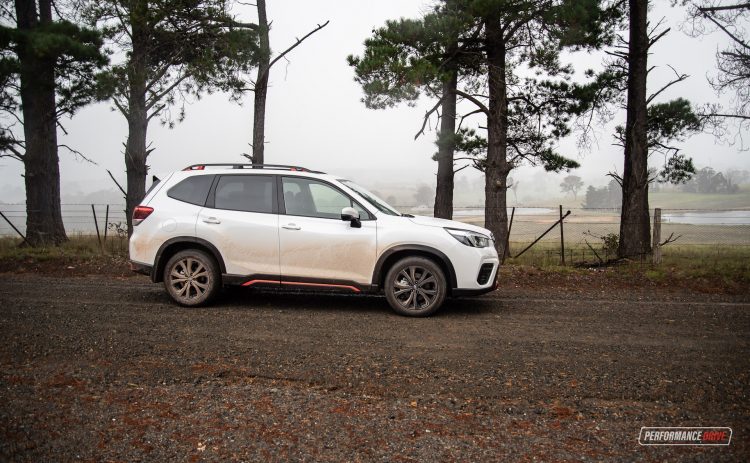 Yes, we are disappointed Subaru does not cater for performance enthusiasts anymore. The latest 2.5 engine does provide respectable acceleration for its power level, though. A manual or even a nice eight-speed auto could go some way to improving its appeal in this department.

However, the current formula obviously resonates well with buyers as the nameplate consistently records strong sales in Australia. So far this year (through May) Subaru Australia has sold 6313 examples (up 47.1 per cent on YTD last year). That makes it the fourth most popular in the 22-strong mid-size non-premium SUV field.

Overall, the Forester remains as a very dependable everyday companion. It’ll handle the urban duties with confidence and practicality, and return good fuel economy while providing a very safe and sound journey. Yet, it’s just as happy out in the bush and dirtying itself up in the wilderness. In fact, we still think this is one of the best off-roaders in this class.