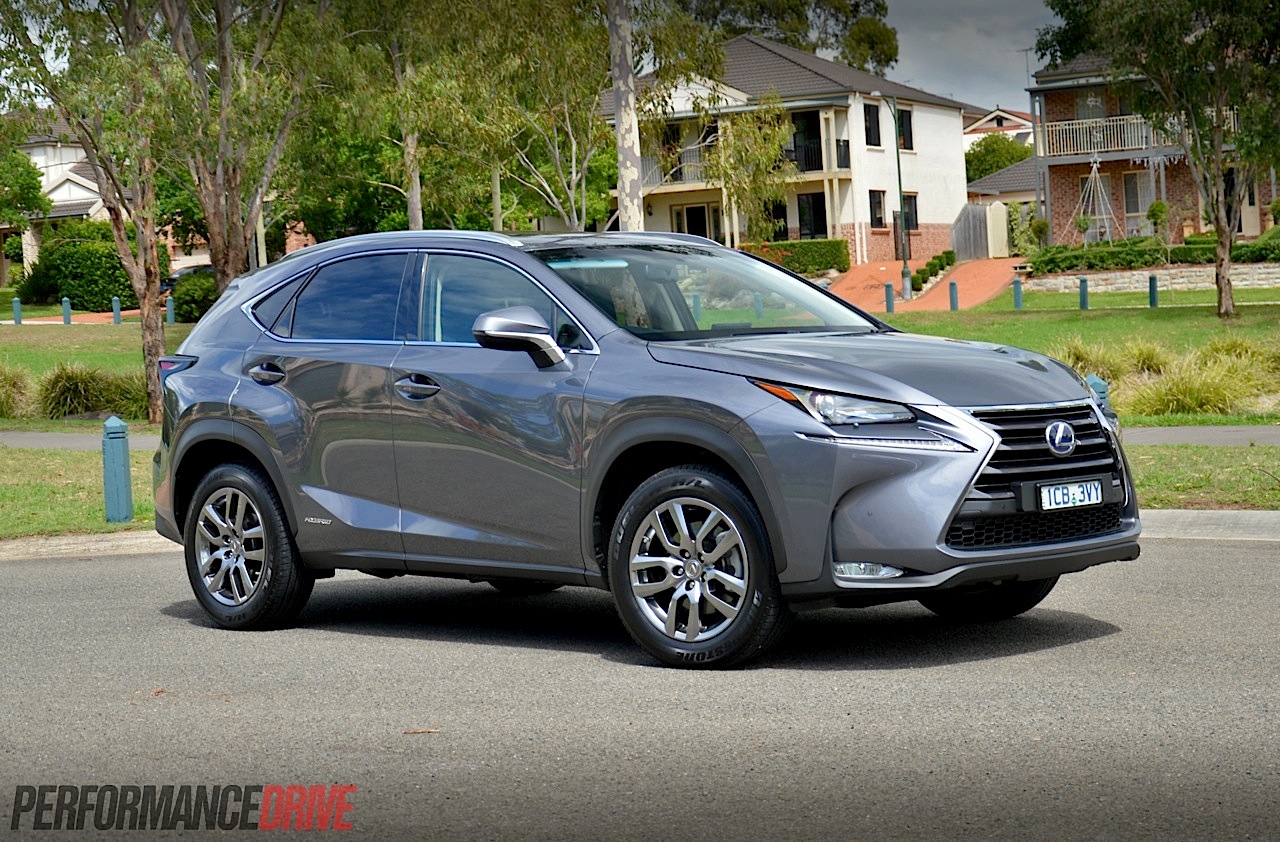 Looking like it was carved into life by a sharp samurai sword and plenty of gym sessions, the Lexus NX 300h is the company’s first-ever small SUV. And as you might have guessed by the H symbol in its name, it is a hybrid and in fact the only hybrid in its class. 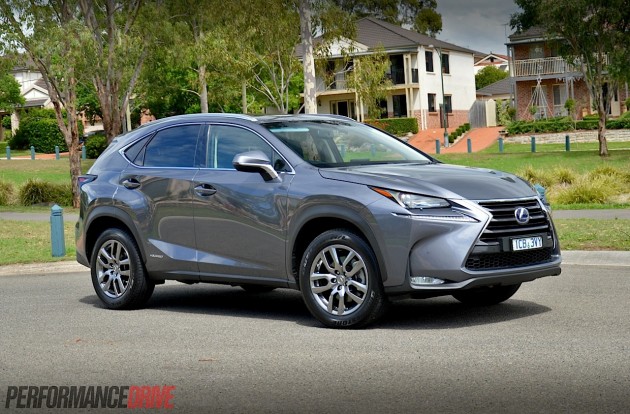 The NX 300h was the initial launch model introduced late in 2014. Lexus has since introduced the NX 200t which comes with the first-ever 2.0-litre turbo-petrol engine from Lexus. They are priced suspiciously close to each other, with the NX 300h kicking off from $55,000 and the NX 200t starting at $52,500. We find this very interesting; Lexus is giving buyers an option to go for either, with no major sacrifice.

Tucked away under the bonnet of the 300h is a 2.5-litre naturally aspirated four-cylinder engine which is paired up to an electric motor system. At maximum throttle the combination develops 145kW of power. This puts it up against contenders such as the Audi Q3 2.0TFSI (155kW), the BMW X1 sDrive20i (135kW), and the Mercedes-Benz GLA 250 (155kW). 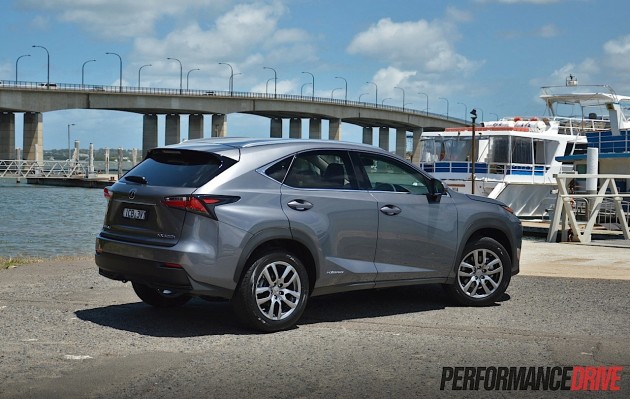 Over the past few years we’ve noticed Lexus has really pursued, quite successfully, a distinct quality and Japanese precision in everything it makes. The NX continues the success by offering awesome attention to detail; soft-close windows, extra skirting on the doors to stop your pants/dress getting dirty, extremely soft leather and cushy seats, and a leather dash with contrast stitching. Lexus has even provided a sneaky little makeup mirror on the underside of a removable centre console lid, just for that extra touch.

All variants are generously equipped too. Even this base model Luxury comes with a plush leather interior with electric seats in the front (height adjustment for both), as well as a comprehensive LCD interface with satellite navigation as standard. Lexus has swapped its joystick-like controller for an advanced touch-pad system. We’re not a fan. It’s difficult to get used to in our opinion. You can fiddle around with the sensitivity settings but we think Lexus has fixed something that wasn’t necessarily broken.

The driver’s seating position feels cocooned and sporty. For those who don’t like a hunkered down position, the cabin can seem overly submerged. This results in a number of blind-spots being presented, especially when looking through one of the rear corners with its complex and very chunky pillars blocking your view. Fortunately, all models come with a rear-view camera as standard.

Out of all of the rivals the Lexus NX cabin definitely feels and looks the most expensive. It’s a very luxurious setting. Part of this character is thanks to the modern design of almost every component. From the buttons, the dash contours and shapes, and the centre console; it’s all super impressive and unique. Everything feels real and extremely well built.

Seating space is on the large side for this segment. Aside from the submerged layout, the front seats are big and offer good headroom and legroom. In the back there’s ample legroom and rear-facing vents to keep passengers cool/warm. There’s also a decent-size bench seat capable of accommodating three adults. Headroom in the back is more than satisfactory thanks to a special cutaway in the ceiling, even with the sunroof taking up some thickness in the middle.

As for cargo space, the NX 300h offers 475 litres. This is the largest cargo area in the class. There’s pockets in the sides for smaller items, and the 60:40 split-fold rear seats can open up a monstrous 1520 litres. Folding down the rear seats also presents an almost completely flat space, making it easy to slide objects in. 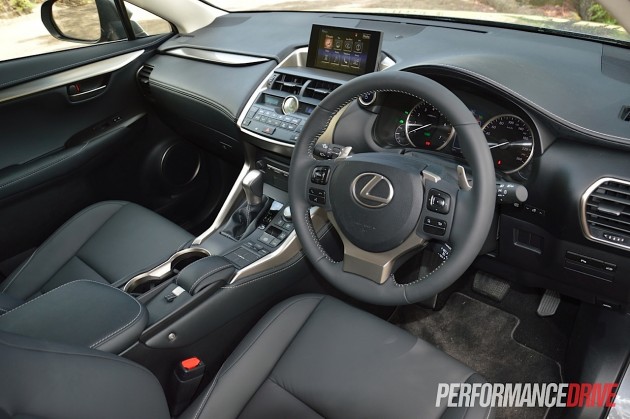 Hybrid and luxury actually go very well together. When you first set off in the NX 300h you’re amazed by how utterly silent it is. Lexus already does a great job of keeping the cabin well insulated from external noises, and with the ability to drive off under electric power alone it becomes even more relaxing.

Under normal driving conditions the NX 300h will take off with electric power – silently – and the petrol engine will seamlessly kick in to take over. The combination and the way it operates is hard to fault – around the city you wouldn’t notice the transition at all. Under more spirited driving the CVT auto does put a downer on your enthusiasm somewhat, however, the engine does get up and go with reasonable urgency. We timed 0-100km/h in 8.6 seconds.

As for fuel consumption, you can expect a real-world economy figure that comes close to the official combined rating. We averaged around 7.5L/100km during our time, which included lots of city driving and a decent sprint up a mountain road. If you’re gentle we’re sure that figure could drop down nearer to the official 5.7L/100km rating. Clicking the EV mode doesn’t really help; it only works at car park speeds and is basically a useless button in our opinion. It automatically tries to hold off on engaging the petrol engine for as long as it can in any other mode anyway, except in sport mode.

Most hybrid vehicles use a technology called brake energy recovery, or regenerative braking. The Lexus has this too. What it means is the powertrain will use deceleration to recharge the batteries. It’s all done automatically. On some vehicles the brake pedal can feel quite hard and touchy because of this. Lexus has implemented an electronically-controlled brake system to cancel out the typically touchy operation. There’s a spongy section during the first 10 per cent of pedal travel. It feels really nice and it’s easy to modulate. Like all new Lexus vehicles, the brakes – 328mm on the front and 281mm on the rear – are powerful and have a high resistance to fading.

In terms of ride comfort, the suspension is supple and calm, almost too soft for sporty driving. It dips under brakes, which can get annoying. However, the steering and tracking around corners remains dedicated and precise. There is some body roll when you first tip it into corners with some enthusiasm, but from there the outfit remains controlled and confident. We think the handling is impressive but you do have to trust the initial body roll and withhold any nervousness that you might have stirring.

Dashing along country roads and wafting along the highway is where this vehicle performs best. The smooth driving character prefers to glide effortlessly through the streets as opposed to being treated with aggression. In that sense, it’s not as frisky or as lively as some other premium SUVs on the market. There is no escaping its pure luxury and pampering comfort though. It is a very pleasant SUV to drive. After all, isn’t that what Lexus is all about? It’s worth noting the F Sport does come with sports suspension, which no doubt increases body stability and overall cornering control.

When it comes time for the weekend you might want to get out in the wilderness. The NX can facilitate that. It offers decent ground clearance for this segment (170mm), and reasonable approach and departure angles. All come with 18-inch alloy wheels but the Luxury does get slightly taller and narrower tyres. There’s also scratch-resistant wheel arch plastics and a mostly tucked-away underbody for mild off-road trekking. 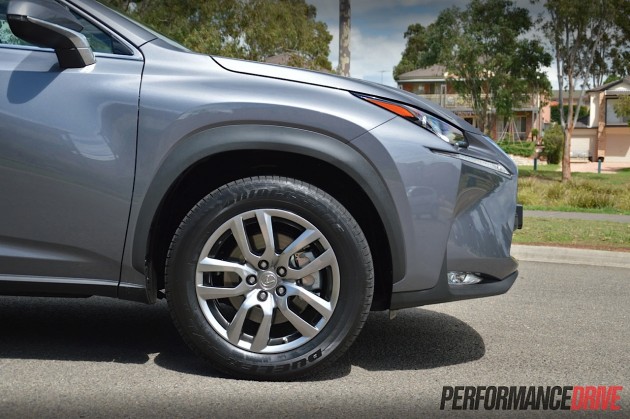 This is another superb vehicle by Lexus. On top of the already sound brand reputation and class-leading engineering in the field of hybrid technology, the NX 300h is a highly recommended proposition in this tough segment. About the only negative side compared with some rivals is the softness of the suspension, which can be solved by the F Sport option. As we mentioned though, this is a Lexus; it’s primary purpose is to pamper its occupants in undiluted luxury. And that’s exactly what you get. We think this is unquestionably the most luxurious vehicle in this class. 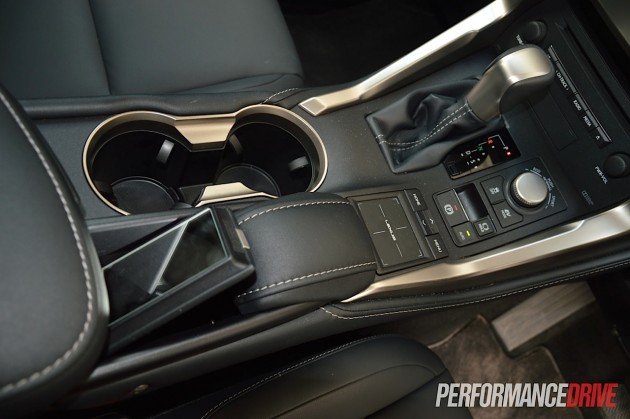