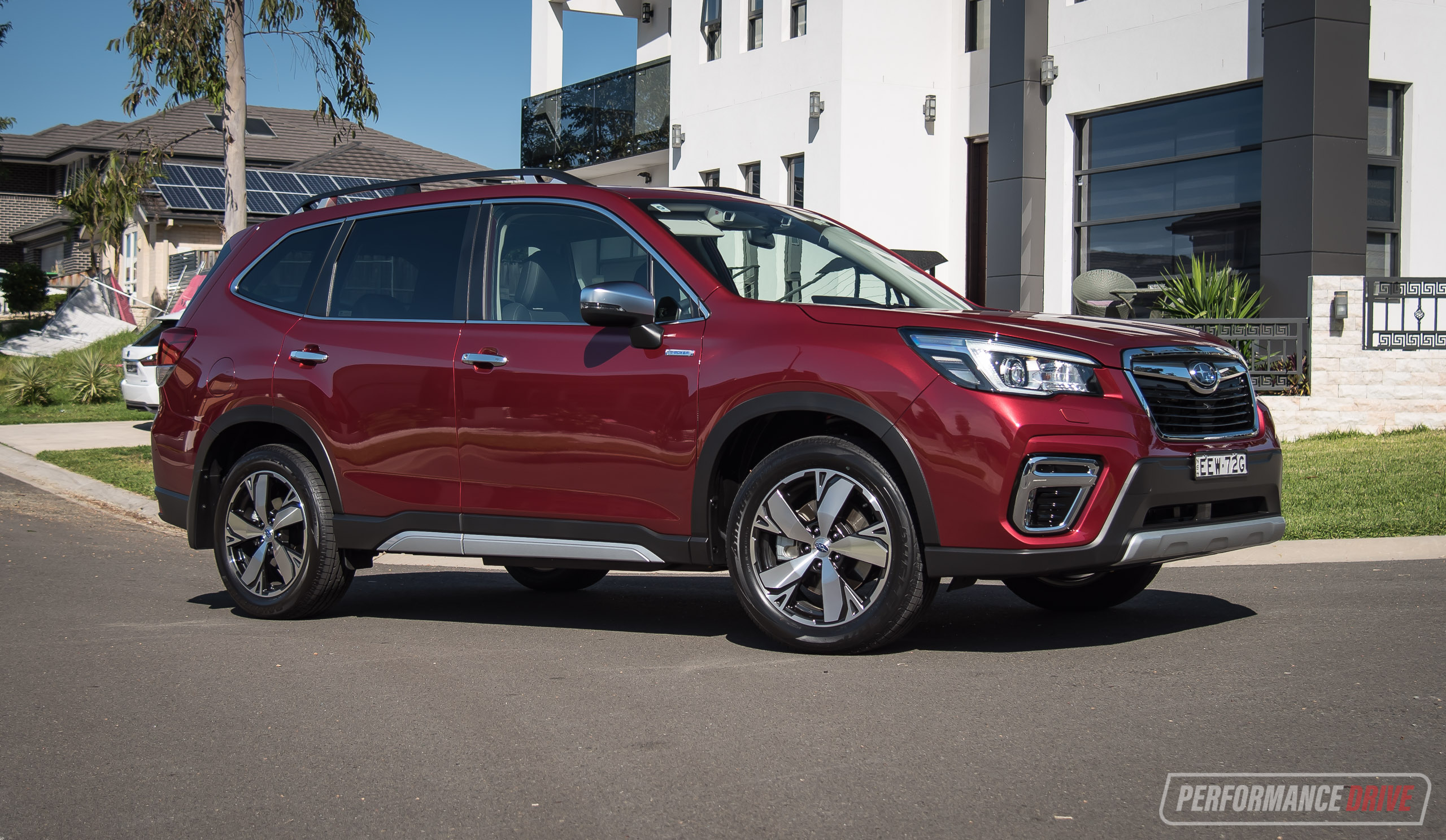 Subaru has jumped on the hybrid bandwagon in an effort to reduce its emissions and fuel consumption, debuting a brand new shared unit for the Forester and XV. 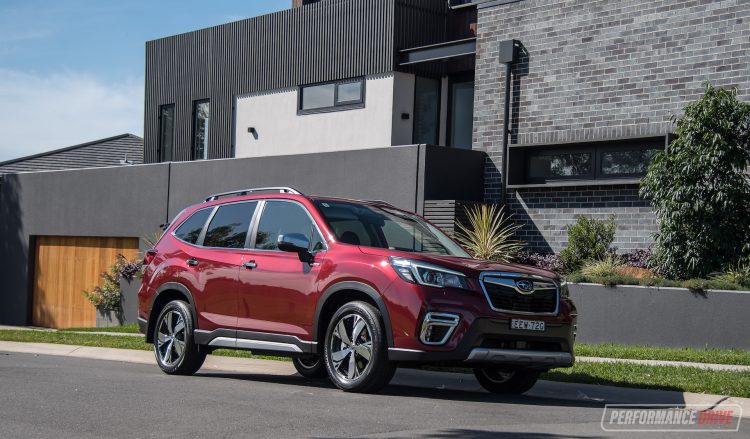 First released in late 2018, the fifth generation Forester is the most popular model for the Japanese brand since its release. For 2020, the new hybrid combines a 12.3kW and 66Nm synchronous electric motor and a 2.0-litre horizontally opposed four-cylinder petrol engine producing 110kW and 196Nm. The all-petrol 2.5-litre non-hybrid engine – 136kW and 239Nm – continues to be available. 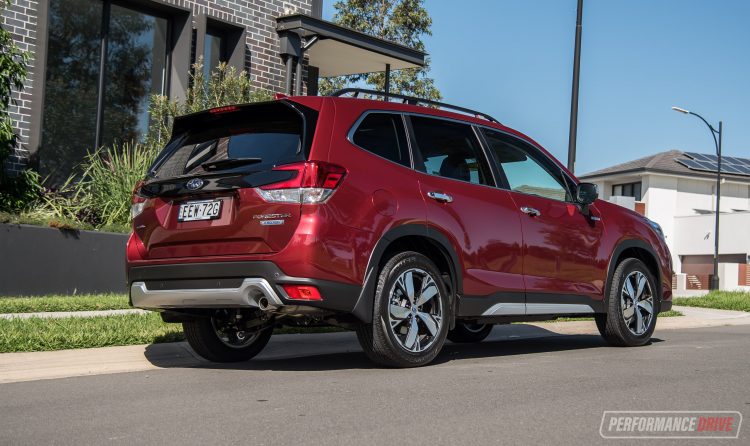 Foresters were one of the first mid-sized SUVs to take off in the ’90s. They remain famous by continuing with a traditional boxy SUV shape that looks like it could adeptly take on a few dirt road adventures but also do the kids’ soccer pickup without behaving like a truck. It still retains that winning look, with practicality in mind – large windows for good visibility and a decent sized boot.

We love the unpainted exterior skirting, which gives off a rugged character, and the newly added glossy black facia around the rear window. Overall, it looks modern, strong and practical in our opinion. And it looks like it could actually go off road, unlike some in this class.

On the inside, descriptions that come to mind are chunky and pointy. Buttons and gauges are big and easy to read, but they lack elegance. There are a few bits of the dash that protrude outwards and into your space, especially where the driver-monitoring ‘eye’ technology resides above the screen. But it all feels strong and well made. 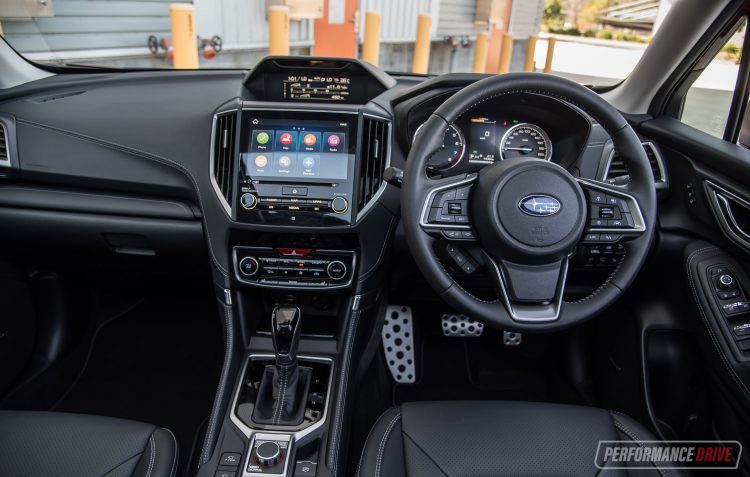 Still on the inside, interior space is much greater than previous generations. It’s an airy place to be whether you’re in the front or rear. There is loads of legroom in the back even when the front seats are adjusted for tall passengers. A notable amount of headroom is thanks to a high roofline. In the boot, the hybrid offers 509 litres. This is up from 498L in the regular Forester, but it means there is no spare wheel only a puncture repair kit. The swap is due to the battery system invading space. Fold the rear seats down the space expands to an impressive 1779 litres. 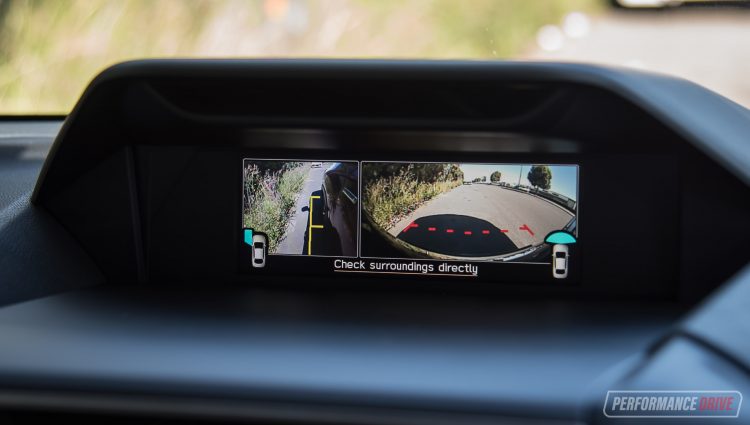 We played around with the Driving Monitoring System in controlled conditions and found it was brilliantly accurate. Alerting when we turned our faces away from the road ahead, or looked down to our lap.

Subaru offers a fantastic five-year/unlimited kilometre warranty. Additionally, the lithium-ion battery comes with an eight-year/160,000km warranty for additional piece of mind. Servicing is required ever 12 month or 12,500km. 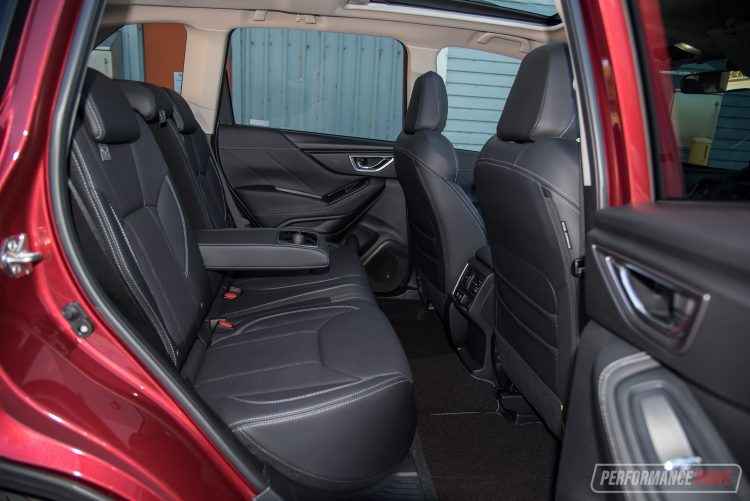 Being a first hybrid configuration with a Subaru boxer engine, it gives us an extra interest in what it’s like to drive. Though, there are many other hybrids already on the market now, including in this segment. And the notable difference is the Forester doesn’t seem to use the battery side solely as much as other hybrids. We were expecting battery-only power on coasting and the usual power down of the engine.

But the petrol engine here seems to power down only when stopped, or very close to stopped. Subaru explains that the electric power can be used up to 40km/h, and the battery has to be fully charged to achieve this. We also found that the electric-to-petrol transition is not as smooth as other hybrid engines. When the petrol unit fires into life, it’s pretty obvious.

On the performance side, there’s no nice way of saying it; it’s quite lacklustre. It’s a 2.0L engine with no turbo, so it produces a meagre 110kW and 196Nm – the same as the smaller and lighter (about 100kg) XV Hybrid. This means up hills it can feel breathless, and hasty take-offs are just not hasty. We timed 0-100km/h in 11.74 seconds, which is well behind the 9.76-second time we achieved in the regular 2.5 petrol model. But what about if power is not important to you? Surely fuel efficiency and emissions become the standing advantage of a hybrid, right? 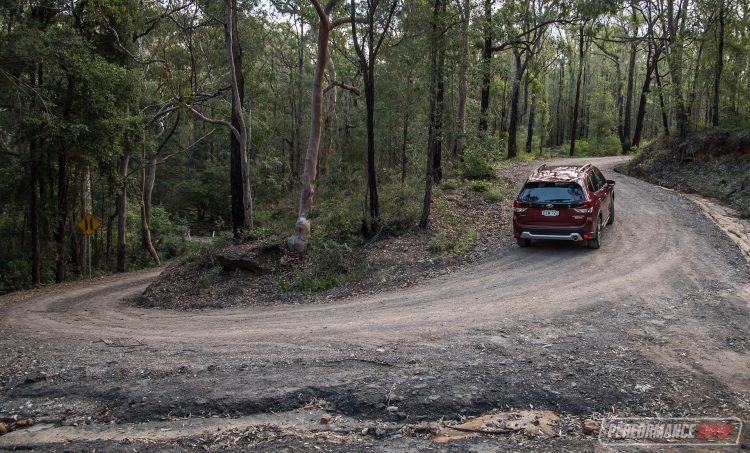 And let’s not forget you’re needing to spend $3000 more on the initial price. Emissions also only drop slightly, from 168 grams per kilometre to 152 grams per kilometre. And much of that reduction would be the result of a smaller engine displacement. The argument simply isn’t strong for the hybrid in this first attempt from Subaru.

With a small 48-litre petrol tank, we struggled to cover 550km from a tankful. This could become an annoyance if you plan to travel long distances. The theoretical average driving range is 716km, based on the official average consumption. And again, that doesn’t look like good engineering progress against the regular 2.5i and its 851km range (63L tank). 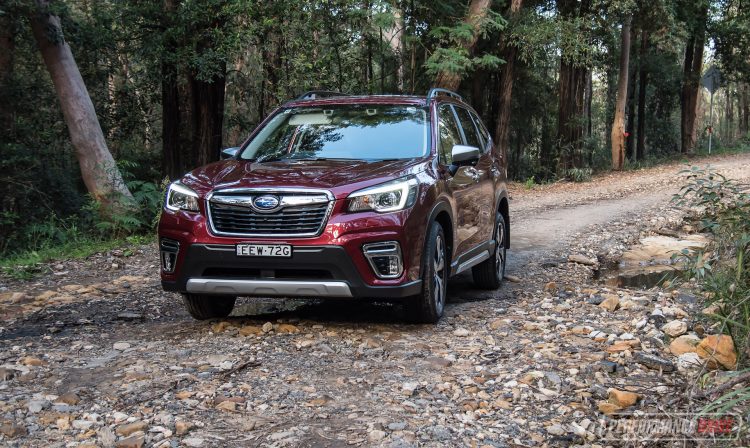 In terms of driving dynamics, the Forester is soft and predictable. It approaches corners with mild body roll and an appropriate amount of feedback is returned to the driver. The steering is light in operation and produces an applaudable 10.8m turning circle, which is great for parking. But it does possess some sloppier characteristics at higher speeds, or during sudden turns.

Going over bumps is made comfortable thanks to that soft suspension. But this means it has the potential to bottom-out if you approach a speed hump quickly. It’s no deal breaker, just not ideal for bumpy conditions. Subaru’s trademark permanent all-wheel drive makes the Forester a safe and sturdy SUV on wet roads, which is a real plus.

As for off road, we enjoyed exploring around on some rough dirt roads. It never felt like the bodywork was going to scrub, and the all-wheel drive system never skipped or spun a wheel. It’s fun and feels strong and dependable. This is one area where the Forester really claws back lots of points.

The Subaru Forester on its own is a fantastic SUV for drivers who care about safety and practicality, and want something dependable on uneven or slippery surfaces. It has loads of tech, and some really useful safety features we have not seen in rivals – like the EyeSight and Driving Monitoring System.

But the new hybrid set up costs more money, so it needs to go further in creating a tangible benefit for buyers. If the hybrid system was cheaper, then by all means, it makes sense. But a significant loss in power and performance, reduced range, and the very minor reductions in fuel consumption and emissions leave us to recommend the regular petrol model.

CONS:
– Argument for hybrid does not add up; big reduction in performance for minuscule fuel economy improvement
– Reduced range over petrol models
– No wireless phone charger