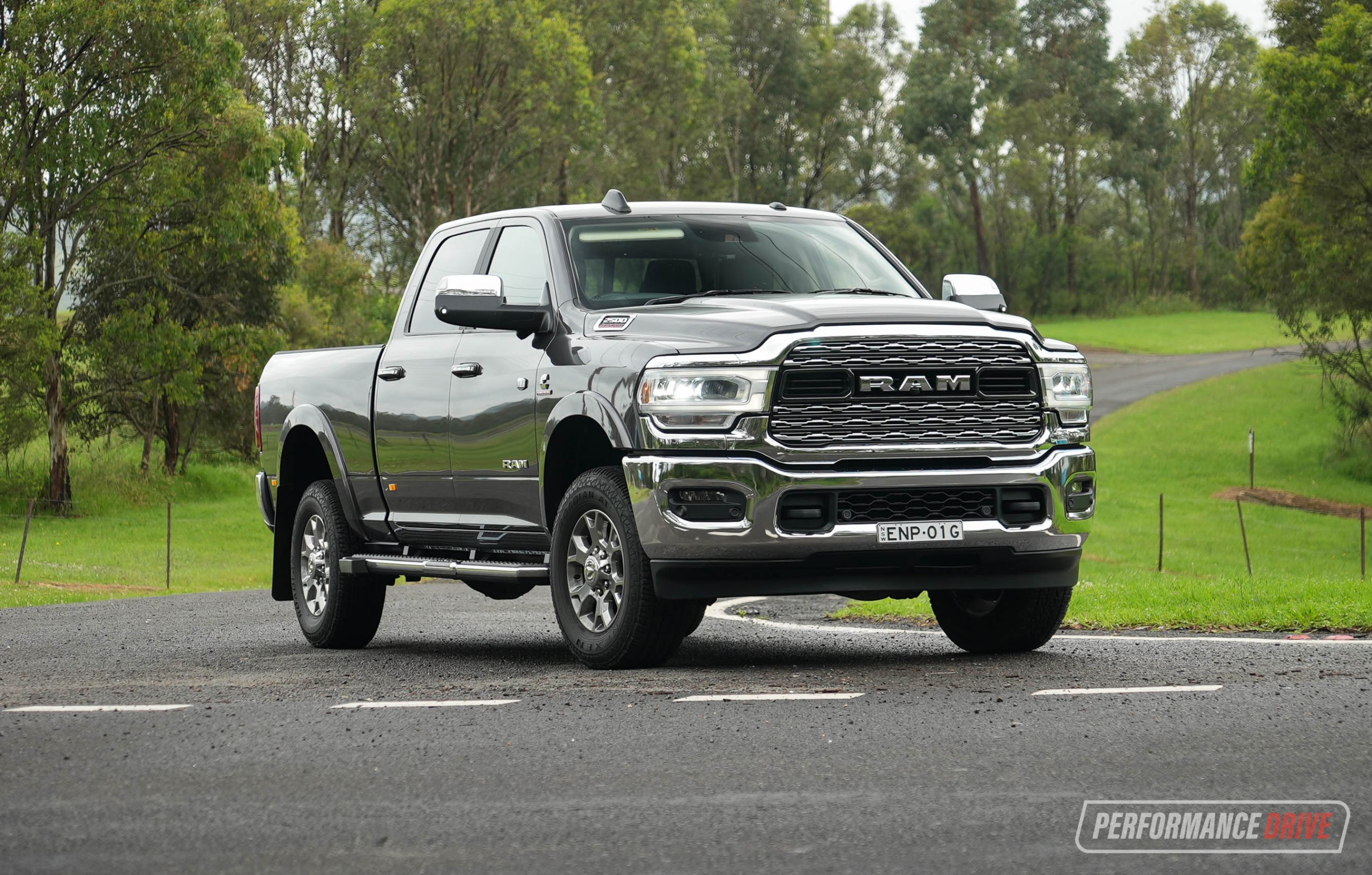 When size truly matters there are only a few properly heavy-duty pickup trucks officially available in Australia. And the 2021 Ram 2500 is one that stands out for a number of very good reasons. 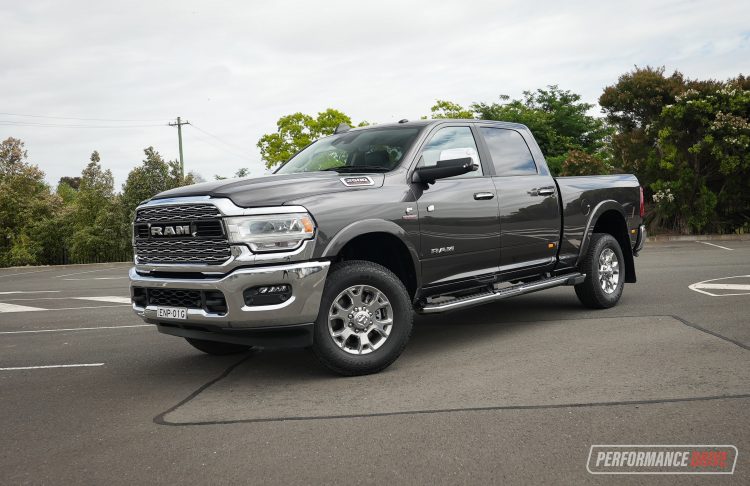 Packing a mammoth 6.7-litre turbo-diesel engine built by renowned heavy machinery manufacturer, Cummins, while also showcasing part-time four-wheel drive with dual-range, a pickup bed that stretches almost 2 metres deep, and boasting a towing capacity of up to 4500kg (or 8000kg with a special gooseneck tow hitch and air brakes), the 2500 certainly has the credentials to fulfil the toughest of jobs.

Yes, we get it, these machines are obviously no good in the city. But head out into the countryside, where space and room to move is not an issue, this is where these thrive and customers clearly appreciate them. RAM Australia sold 194 2500s during all of 2021, according to December VFACTS data, which is a huge jump from 13 the year before. The local arm also sold 12 3500s, and 3819 examples of the 1500 V8.

Ram Trucks Australia officially offers three main models, starting out with the ‘junior’ 1500, and then the heavy-duty 2500 and 3500 (they share the same external dimensions). All are shipped from the USA and then ‘remanufactured’ to right-hand drive here in Australia. The local work is done by Walkinshaw Automotive Group, which is the same outfit that does the Chevrolet Silverado for Australia. All RAM models are backed by a factory three-year/100,000km warranty. 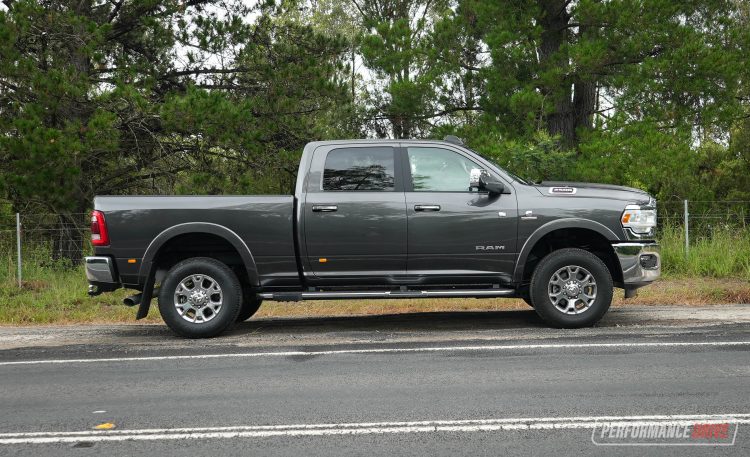 One of the potential problems faced by interested buyers of the 2500 is the price in Australia. It starts from $157,950 for the Laramie and from $162,900 for the RamBox version (it comes with large storage boxes within the wings of the cargo tray). Some might see this as a tall order considering an equivalent Ram 2500 Laramie 6.7 in the USA is priced from around US$55,000. After a straight conversion to AUD (about $75,75o at today’s rates), it means around $82,000 goes into importing and converting to RHD, and getting it all clear to meet Australian Design Rules.

Does that weigh up? Well, considering the local wages (more than 250 jobs) and taxes and duties that need to be factored in, and some level of profit obviously, it is probably not too bad. Also, the only alternative is a 200 Series Toyota LandCruiser converted to a dual-axle rear end and tray-back. But be prepared to spend about the same or more on that anyway. 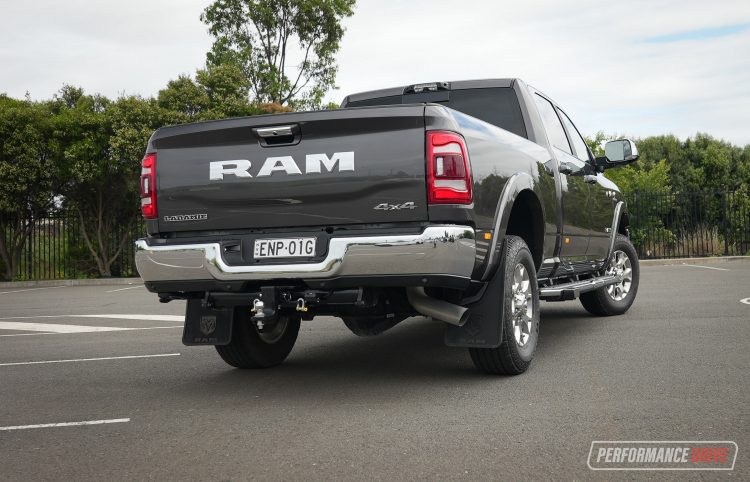 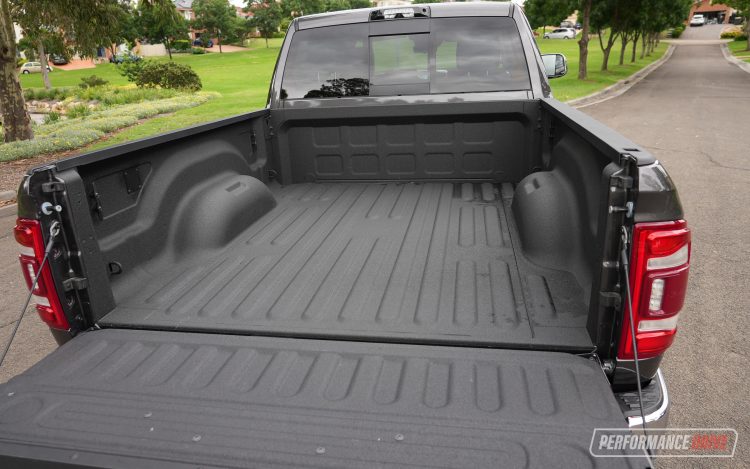 Drivers can select rear-wheel drive and four-wheel drive at the touch of a button, and even engage low-range for those more serious situations. Ground clearance isn’t very ‘heavy-duty’, with 237mm at the front axle but only 222mm at the back. We see these sorts of figures from some SUVs. The long wheelbase also limits the break-over angle to 22 degrees. The approach angle of 22.9 degrees and departure angle of 25.8 degrees are not particularly a standout either.

You do get all-terrain tyres though, measuring 275/70. We’re surprised to see they are Korean-made Nexen tyres and not some American hoops. Braking performance and wet road grip is not fantastic, according to our tests. Nonetheless, they are mounted on 18-inch alloy wheels. A full-size spare wheel is mounted underneath the tray, although it is a steel rim. 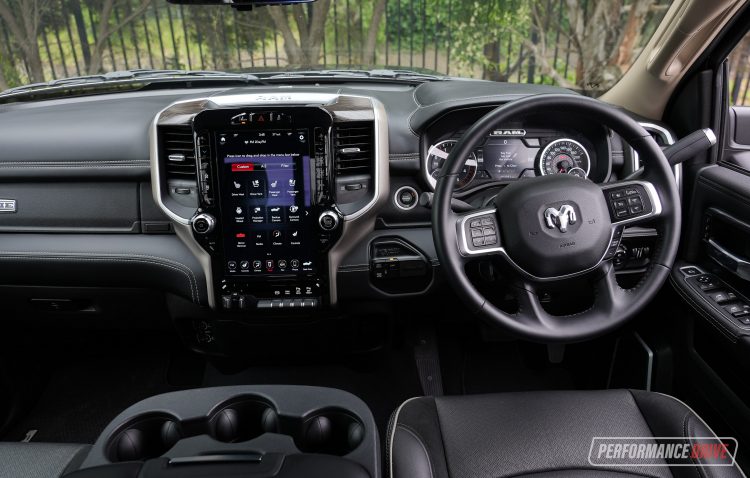 There are more ‘metres’ inside, too. RAM says there is just over 1 metre of headroom in the front, and over a metre of legroom. Meanwhile, shoulder space in the front is a whopping 1.67 metres. Check out the size of that centre console lid. That’s because if you lift the whole thing up there is a third seat under there. Three cup holders in the front, because why not, and then four phone charging ports. We love that RAM doesn’t stuff around offering USB or USB-C. It just says, ‘here, have two of each.’

Up on the dash is a huge 12-inch vertical touch-screen running FCA’s Uconnect operating system. It is a very impressive system actually, with simple menus and easy navigation to all of the apps, and great graphics. There are a bunch of interesting apps included as well, including not only a surround-view camera system with individually selectable views, but also a tray view complete with LED lights.

We also enjoy the quick jump-to buttons around the screen as they help to reduce distraction while driving. In fact, overall I’d say this is one of my favourite touch-screen setups I’ve ever experienced in a ute. It’s not overly complicated or even overly capable – some screens out there are more computer-like than in-car system, with very little consideration for the suitability for operation while driving. 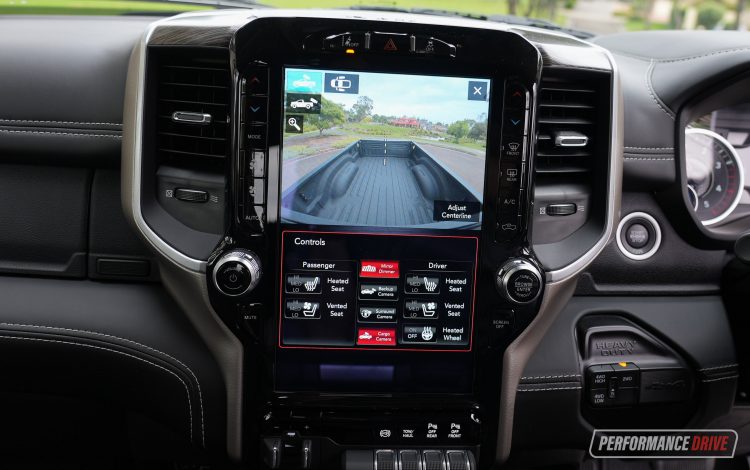 Although the instrument cluster is not fully digital there is a comprehensive digital display in between two mechanical gauges. It’s a 7.0-inch screen anyway, showing all kinds of interesting and cool telemetry, including real-time turbo boost pressure, full trip info, trailer info, adaptive cruise control animations, and of course a digital speed readout. All of this stuff can be toggled via arrow buttons on the steering wheel which we find quite intuitive as well.

Need a ute with good rear seat space? Look at the size of the rear legroom presented here. It’s like a freakin’ limousine. Did we mention this is a big vehicle? Need a charging port for your phone? Don’t worry, there’s another four options in the back (USB and USB-C). You also get climate vents, four more cup holders, and endless storage options around the place including neat shelves within the door trims. 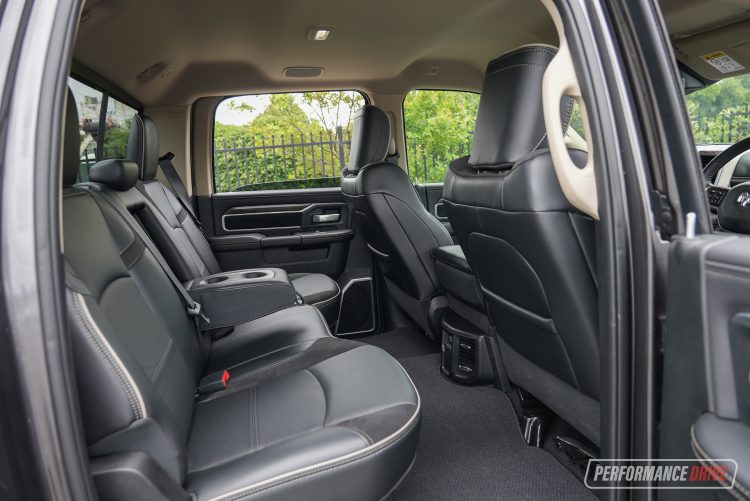 Let’s start with one of the most attractive (in our view) aspects of this big beast. The engine. A 6.7-litre Cummins turbo-diesel inline-six. Each piston is over 1 litre in capacity, which is mega, and each of them combine to develop mind-bending power and torque figures. You get 276kW at just 2800rpm, and an earth-turning 1152Nm at just 1700rpm. This makes it one of the most torque-rich diesels currently on the new-car market (excluding actual trucks, obviously).

What’s it like to drive? Well, the beefy sound, and the majestic yet relentless torque reminds us of a luxury yacht or even a modern ferry. It doesn’t care about physics and weight, at all. The fact that it only needs a rev window of about 1100rpm also contributes to the unbothered, unstressed character of it. You probably won’t believe us but it’s actually really easy to speed in this thing. We timed 0-100km/h in just 8.18 seconds. However, it’s almost like it does that with only half-throttle. Endless charging force. 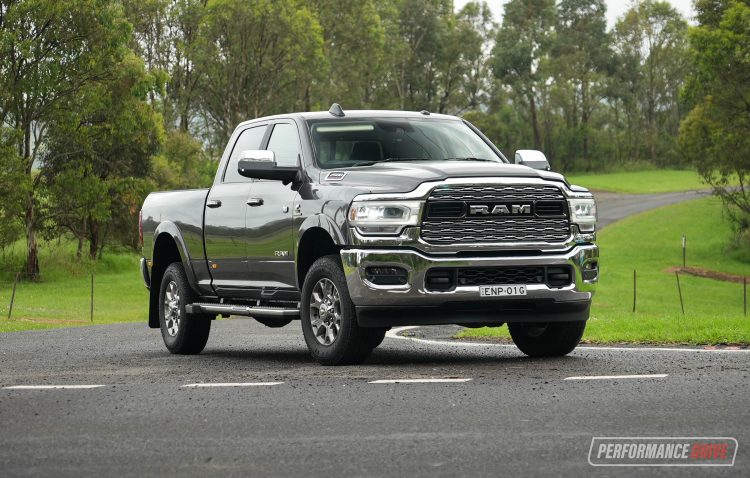 Despite its size and the capacity of each combustion chamber, the engine is incredibly smooth and quiet. In fact, we managed to balance a 50c coin on top of the engine while it was idling (see video below). And it stayed on balance for about five seconds. That’s insane. We’d love to see another engine of this size that could do the same. And given you only need that small window of revving, the drive experience is surprisingly refined and luxurious. At 100km/h, for example, the engine chugs along at about 1300rpm.

In terms of towing and hauling loads, the payload capacity is a fairly ordinary 835kg. Many other dual-cab utes (although much smaller) offer closer to 1000kg. The towing capability is the most impressive element. The unbraked trailer rating is the normal 750kg, and with a braked trailer you can tow 3500kg. That’s with a standard 50mm tow ball. Whack on a 70mm ball and that figure jumps to 4500kg. Have something bigger to tow? Option up to an auxiliary gooseneck hitch and air brakes and you can pull up to 8000kg. The equivalent Chevrolet Silverado 2500HD 6.6TD is rated 3500kg and 4500kg as well, but using a pintle hitch its max rating is 5890kg.

Perhaps the most important figure is the gross combination mass (GCM). This is rated at 12695kg. So that means once you minus the 3660kg kerb weight and attach a 4500kg trailer, you still have 4535kg to play with for cargo and passengers and content in the trailer. Even with an 8000kg trailer attached there’s still 1035kg leftover for cargo and passengers. The Silverado 2500HD offers a GCM of 9801kg. Out of interest, the RAM 3500 offers a GCM of 12837kg and the payload springs up to 1693kg. 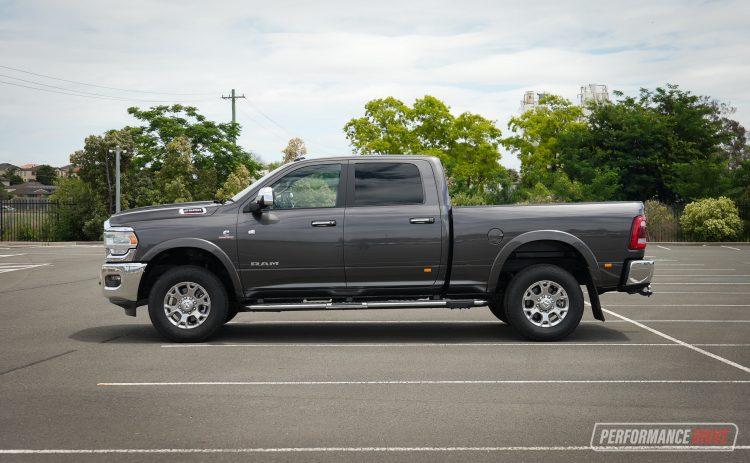 On the road this 2500 feels sturdy and planted, and obviously pretty big. But the width is not intimidating – mainly the length can be, especially in tighter conditions. The 6m-plus length also means it will not fit in a conventional car parking space. You’ll need to find the trailer spots or just put up with parking at a distance from crowded areas. At least there is a perched-up view so it’s easy to see around, and you have the surround-view cameras for backup.

The steering feel is consistent and mostly emotionless. There is some play on centre as well that you need to account for, which sometimes leaves you sawing at the wheel on the highway. But you do eventually get used to it. Handling and grip levels are about as good as you need them, although, in the wet it can spin up the rear wheels pretty easily. And the traction control is (enjoyably) lenient when left on.

Obviously this is not for everyone. But for the select few who rely on machines like this, particularly farmers and horse owners, RAM has done a superb job of mixing refinement and modern conveniences with outright heavy-duty capability. It is technically the most tow-ready passenger vehicle on the market, in terms of capacities, yet it drives and goes like a good SUV in many aspects. The 6.7 Cummins engine is a masterpiece that perfectly matches the characteristics and expectations of this style of machine as well.

PROS:
– 6.7 Cummins engine is wonderfully smooth yet monstrous in torque
– 12-inch Uconnect touch-screen (one of the best in the industry we think)
– Huge cabin with appointments for all; cup holders, USB, USB-C
– 12,695kg GCM, up to 8000kg towing capacity
– Looks tough

CONS:
– Some steering play around centre position
– We’re not a fan of the Nexen tyres, some traction issues on wet roads
– Steep price